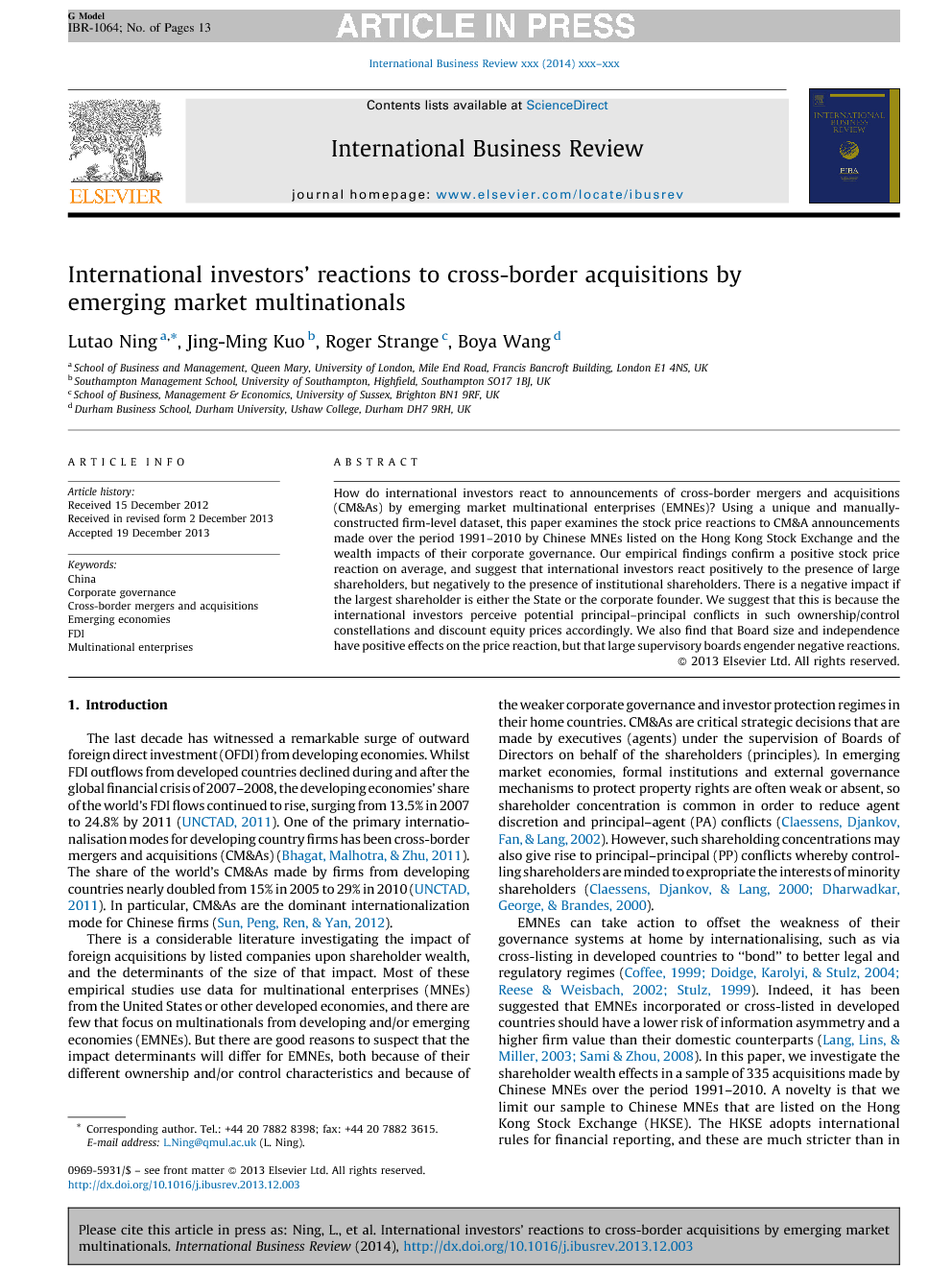 How do international investors react to announcements of cross-border mergers and acquisitions (CM&As) by emerging market multinational enterprises (EMNEs)? Using a unique and manually-constructed firm-level dataset, this paper examines the stock price reactions to CM&A announcements made over the period 1991–2010 by Chinese MNEs listed on the Hong Kong Stock Exchange and the wealth impacts of their corporate governance. Our empirical findings confirm a positive stock price reaction on average, and suggest that international investors react positively to the presence of large shareholders, but negatively to the presence of institutional shareholders. There is a negative impact if the largest shareholder is either the State or the corporate founder. We suggest that this is because the international investors perceive potential principal–principal conflicts in such ownership/control constellations and discount equity prices accordingly. We also find that Board size and independence have positive effects on the price reaction, but that large supervisory boards engender negative reactions.

The last decade has witnessed a remarkable surge of outward foreign direct investment (OFDI) from developing economies. Whilst FDI outflows from developed countries declined during and after the global financial crisis of 2007–2008, the developing economies’ share of the world's FDI flows continued to rise, surging from 13.5% in 2007 to 24.8% by 2011 (UNCTAD, 2011). One of the primary internationalisation modes for developing country firms has been cross-border mergers and acquisitions (CM&As) (Bhagat, Malhotra, & Zhu, 2011). The share of the world's CM&As made by firms from developing countries nearly doubled from 15% in 2005 to 29% in 2010 (UNCTAD, 2011). In particular, CM&As are the dominant internationalization mode for Chinese firms (Sun, Peng, Ren, & Yan, 2012). There is a considerable literature investigating the impact of foreign acquisitions by listed companies upon shareholder wealth, and the determinants of the size of that impact. Most of these empirical studies use data for multinational enterprises (MNEs) from the United States or other developed economies, and there are few that focus on multinationals from developing and/or emerging economies (EMNEs). But there are good reasons to suspect that the impact determinants will differ for EMNEs, both because of their different ownership and/or control characteristics and because of the weaker corporate governance and investor protection regimes in their home countries. CM&As are critical strategic decisions that are made by executives (agents) under the supervision of Boards of Directors on behalf of the shareholders (principles). In emerging market economies, formal institutions and external governance mechanisms to protect property rights are often weak or absent, so shareholder concentration is common in order to reduce agent discretion and principal–agent (PA) conflicts (Claessens, Djankov, Fan, & Lang, 2002). However, such shareholding concentrations may also give rise to principal–principal (PP) conflicts whereby controlling shareholders are minded to expropriate the interests of minority shareholders (Claessens et al., 2000 and Dharwadkar et al., 2000).

The growth in CM&As from emerging economies has been remarkable. Our knowledge is still limited regarding the value implications of these CM&As and the impact of PA and PP governance conflicts on the value variations, particularly how this relationship is perceived by international investors. This paper makes an attempt to study the impact of various corporate governance characteristics on the stock price reactions of a sample of Chinese MNEs listed or incorporated on the HKSE. As HKSE-listed Chinese firms have committed to higher governance standards by listing in an international market and complying with the stricter foreign disclosure requirements, they should benefit from an enhanced information environment and improved transparency, thereby reducing expropriation risks. Our findings firstly indicate that overseas stock markets reward these firms with positive shareholder returns upon the announcement of cross-border takeovers. Secondly, we examined the effects of potential PA and PP governance conflicts on the variation in the MNEs’ stock performance following CM&As. After controlling for a range of other possible firm-specific effects, we found there are significant relationships between the announcement returns, the ownership structure and the identities of the controlling shareholders. We found that international investors perceive that a high level of largest-shareholder ownership concentration creates value, but also raises the risk of expropriation of minority principals, which is particularly pronounced in state-controlled and founder-controlled firms. International shareholders discount share prices as a consequence of these perceived corporate governance issues. Third, we show that the PP and PA conflicts may be mitigated by a large and independence Board of Directors, but that supervisory boards (at least in the Chinese context) appear to exacerbate rather than assuage international investors’ fears of conflicts. Our research results have an important implication for the corporate governance literature in that we demonstrate how various governance variables affect the shareholder wealth effects of EMNEs’ internationalisation via CM&As, as perceived by international investors. Research rooted in agency theory suggests that effective corporate governance can increase shareholder returns through minimizing PA conflicts. Building on this work, we postulate that effective corporate governance can reduce the internal costs of aligning different stakeholders’ interests and risk preferences, and of coordinating organisational activities across borders. Nevertheless, although many EMNEs may have adopted many of the features of Anglo-American corporate governance, the mechanisms do not necessarily function as supposed in emerging economies. Their external governance mechanisms, market institutions, and minority shareholder protection are limited and less effective. Block shareholder ownership concentration becomes necessary to constrain agent discretion, improve firms’ risk-taking abilities and reduce the internal transaction costs derived from coordination among shareholders when firms are engaged in CM&As. However, this concentrated structure runs the risk of expropriation of minority equity principals. Given the prevalence of concentrated ownership in EMNEs, the PP rather than PA conflicts are often overlooked as a major issue that affects the shareholder value creation effect of CM&As as perceived by international investors. Our results suggest that investment returns may be disproportionately distributed between controlling shareholders and minority equity investors. As international investors discount the share prices of EMNEs with potential PP conflicts, and thus increase the cost of capital of these EMNEs, the controlling shareholders will eventually bear some of the costs of the PP agency issues. This paper is not without limitations. We summarize these as follows along with some suggestions for future research areas. Firstly, the value creation or destruction needs to be interpreted cautiously. Although the event study method is generally regarded as a reliable measure for CM&A's market value implications, it is based on the efficient market hypothesis that the stock market reacts instantly and completely to firms’ strategic decisions (Gubbi et al., 2010 and Kale et al., 2002). We also focus on the value consequences from the perspective of international bidders. The degree of information asymmetry, complications in the firm takeover events, and the market knowledge of international investors could lead to some degree of heuristic bias. Future research might need to take into account these methodological constraints. Secondly, CM&As by EMNEs are a relatively new phenomena and their frequency is still relatively low compared the frequency of CM&As by MNES of developed countries. This leads to the sample size of this paper being small compared to studies on CM&As by developed country MNEs. Moreover, the financial reporting practices of EMNEs as seen in this study have resulted in many missing variables, although manual collection of the data used in this paper has minimised this problem13. In the future this issue may be resolved as the globalisation of business progresses and the adoption of international business practices by EMNEs becomes widespread. Future studies might be in a better position to re-examine some of the governance and value creation issues related to CM&As, with a longer sample period and more observations. Cross-country studies of EMNEs’ CM&As through third countries might reveal an even more comprehensive picture and offer more theoretical explanations for such events.