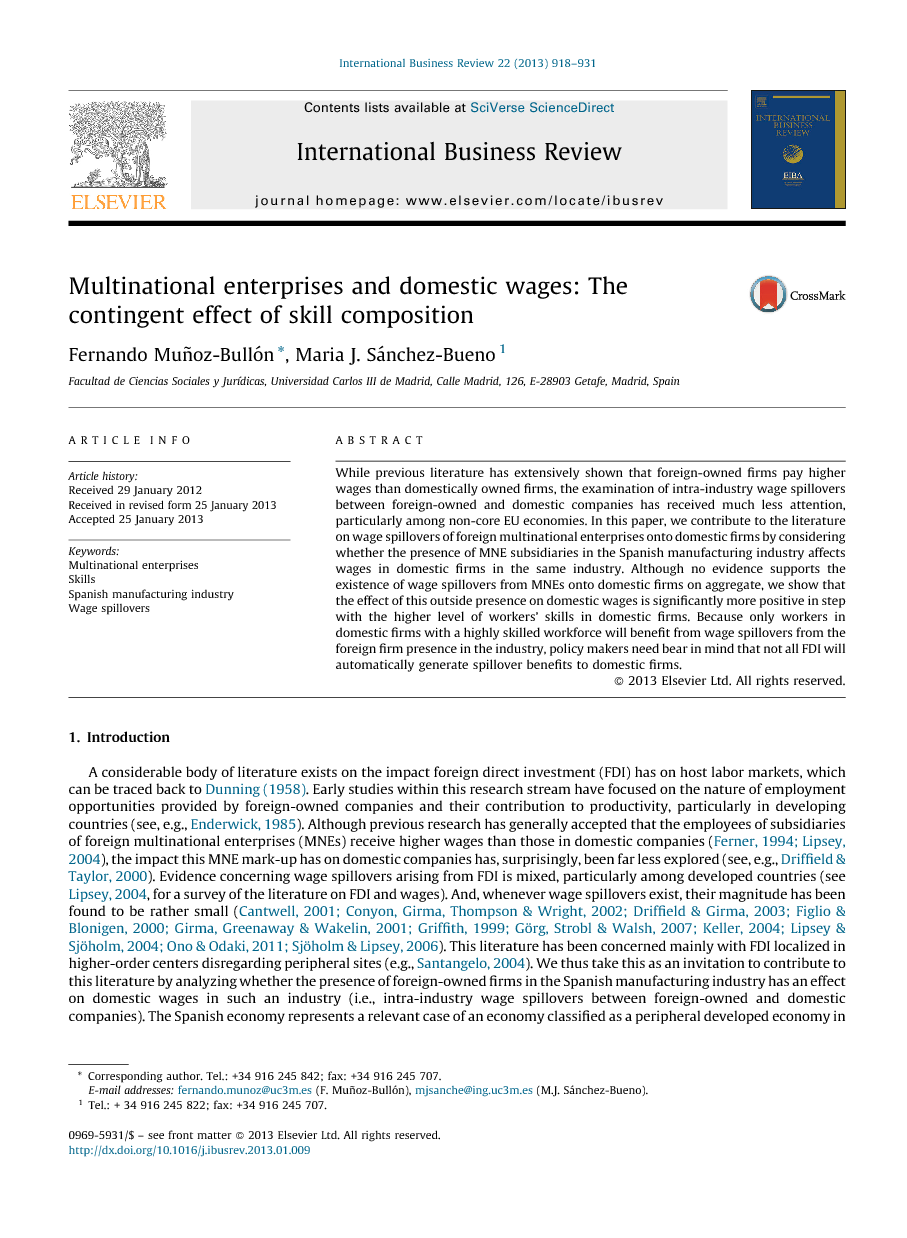 A considerable body of literature exists on the impact foreign direct investment (FDI) has on host labor markets, which can be traced back to Dunning (1958). Early studies within this research stream have focused on the nature of employment opportunities provided by foreign-owned companies and their contribution to productivity, particularly in developing countries (see, e.g., Enderwick, 1985). Although previous research has generally accepted that the employees of subsidiaries of foreign multinational enterprises (MNEs) receive higher wages than those in domestic companies (Ferner, 1994 and Lipsey, 2004), the impact this MNE mark-up has on domestic companies has, surprisingly, been far less explored (see, e.g., Driffield & Taylor, 2000). Evidence concerning wage spillovers arising from FDI is mixed, particularly among developed countries (see Lipsey, 2004, for a survey of the literature on FDI and wages). And, whenever wage spillovers exist, their magnitude has been found to be rather small (Cantwell, 2001, Conyon et al., 2002, Driffield and Girma, 2003, Figlio and Blonigen, 2000, Girma et al., 2001, Griffith, 1999, Görg et al., 2007, Keller, 2004, Lipsey and Sjöholm, 2004, Ono and Odaki, 2011 and Sjöholm and Lipsey, 2006). This literature has been concerned mainly with FDI localized in higher-order centers disregarding peripheral sites (e.g., Santangelo, 2004). We thus take this as an invitation to contribute to this literature by analyzing whether the presence of foreign-owned firms in the Spanish manufacturing industry has an effect on domestic wages in such an industry (i.e., intra-industry wage spillovers between foreign-owned and domestic companies). The Spanish economy represents a relevant case of an economy classified as a peripheral developed economy in the European context. The stock of inward FDI in Spain has increased ten times between 1990 and 2010 (Meardi, 2012). For the purpose of analyzing the importance of wage spillovers that may occur due to the presence of foreign firms in the same industry as the observed firms, we use previously unexplored firm-level data from the Spanish Survey of Business Strategies for the 1992–2008 period. The question of whether a significant foreign presence leads to wages being ratcheted up among domestic companies is important at a theoretical level. If foreign firms keep most of their high value-added operations in their home countries – with their operations in the host market consisting primarily of lower value-added assembly operations – foreign-owned firms would have relatively low skilled workers and hence relatively low wages. In this case, the role of foreign investors in transmitting productive knowledge would be limited. In contrast to this, foreign companies may overcome the costs of entering the host market through the exploitation of some specific advantage relative to their domestically owned competitors. If foreign firms are unable to effectively appropriate all the benefits of innovative and in-firm knowledge, wage spillovers onto domestic firms may be observed. Thus, in terms of wage spillovers, FDI may be beneficial in some situations but not in others. Following work on this topic, the extent to which an outside presence in an industry increases wages for domestic firms in the same industry may be conditional on certain circumstances. Spillovers have been proposed to “depend crucially on the conditions for local firms” (Blomström, 2002: 177). In particular, previous literature has underlined local absorptive capacity as a key factor for local firms to benefit from optimal potential spillovers. In this regard, Blomström and Kokko (1998) indicated that “the positive effects of foreign investment are likely to increase with the level of local capability of absorbing these” (p. 247). In line with this research, we claim that the beneficial wage effects of an outside presence are not distributed evenly, but instead are concentrated in domestic companies that are better placed to benefit from the introduction of new technology and managerial knowledge from foreign-owned companies. Although our results show no evidence to support the existence of positive wage spillovers from foreign investment onto domestic companies, one exception is that of highly skilled domestic firms, whose skill intensity raises the domestic wage effect of the presence of MNE subsidiaries. Therefore, not every domestic firm has the ability to absorb new technological or managerial knowledge from foreign-owned companies. This paper contributes in several ways to the literature on spillovers of MNE subsidiaries onto domestic firms. On the one hand, the impact of MNE activities on economic development has been investigated mainly in developing and less developed economies (Santangelo, 2004 and Santangelo, 2009). Our knowledge regarding the implications for domestic firms of the presence of foreign MNEs in their industry is still sketchy, particularly among developed countries. In this sense, FDI in Spain has been a prominent driver of Spain's economic growth over the past forty years (Villaverde & Maza, 2011). In this country, there is a substantial level of foreign-owned jobs relative to total employment in manufacturing – foreign-owned companies accounted for 16% of employment in manufacturing in 2006 (see Eurofound, 2009). Therefore, this paper adds to our understanding of the value and interest of FDI in Spain as a peripheral economy. On the other hand, because previous literature regarding Spain has focused on the productivity effects of the presence of foreign MNE subsidiaries (Barrios and Strobl, 2002 and Merino de Lucas and Salas, 1995), the specific effect of an outside presence on domestic wages has not been analyzed in this country. To the best of our knowledge, there is no similar study for Spain that attempts to explain and test wage spillovers between foreign MNE subsidiaries and domestic firms. The remainder of the paper is structured as follows. Section 2 sets out the theoretical background, while Section 3 develops the hypotheses. Section 4 describes the data and variables, and discusses the empirical method applied. Finally, Section 5 discusses the findings and Section 6 concludes.