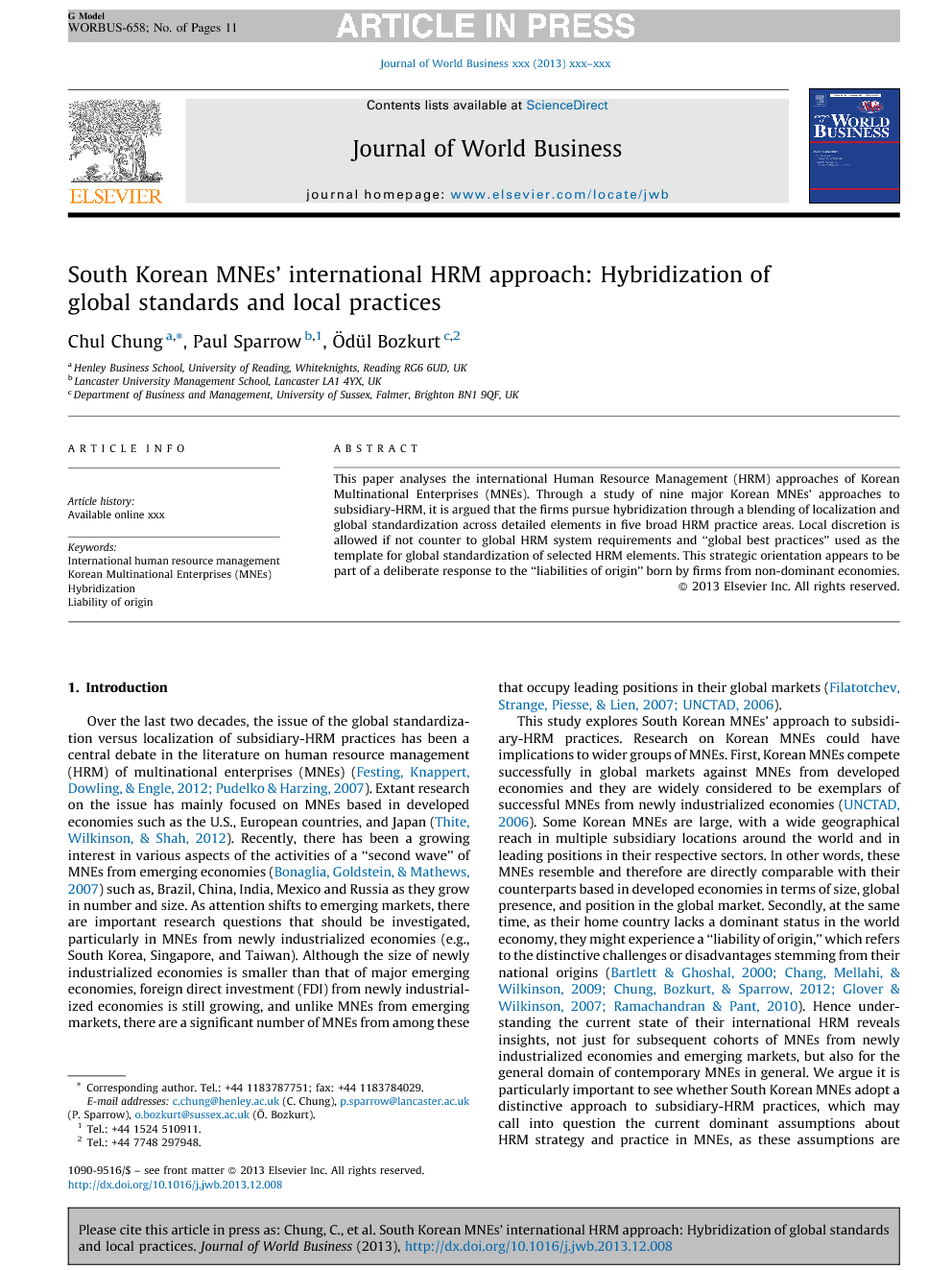 This paper analyses the international Human Resource Management (HRM) approaches of Korean Multinational Enterprises (MNEs). Through a study of nine major Korean MNEs’ approaches to subsidiary-HRM, it is argued that the firms pursue hybridization through a blending of localization and global standardization across detailed elements in five broad HRM practice areas. Local discretion is allowed if not counter to global HRM system requirements and “global best practices” used as the template for global standardization of selected HRM elements. This strategic orientation appears to be part of a deliberate response to the “liabilities of origin” born by firms from non-dominant economies.

Over the last two decades, the issue of the global standardization versus localization of subsidiary-HRM practices has been a central debate in the literature on human resource management (HRM) of multinational enterprises (MNEs) (Festing et al., 2012 and Pudelko and Harzing, 2007). Extant research on the issue has mainly focused on MNEs based in developed economies such as the U.S., European countries, and Japan (Thite, Wilkinson, & Shah, 2012). Recently, there has been a growing interest in various aspects of the activities of a “second wave” of MNEs from emerging economies (Bonaglia, Goldstein, & Mathews, 2007) such as, Brazil, China, India, Mexico and Russia as they grow in number and size. As attention shifts to emerging markets, there are important research questions that should be investigated, particularly in MNEs from newly industrialized economies (e.g., South Korea, Singapore, and Taiwan). Although the size of newly industrialized economies is smaller than that of major emerging economies, foreign direct investment (FDI) from newly industrialized economies is still growing, and unlike MNEs from emerging markets, there are a significant number of MNEs from among these that occupy leading positions in their global markets (Filatotchev et al., 2007 and UNCTAD, 2006). This study explores South Korean MNEs’ approach to subsidiary-HRM practices. Research on Korean MNEs could have implications to wider groups of MNEs. First, Korean MNEs compete successfully in global markets against MNEs from developed economies and they are widely considered to be exemplars of successful MNEs from newly industrialized economies (UNCTAD, 2006). Some Korean MNEs are large, with a wide geographical reach in multiple subsidiary locations around the world and in leading positions in their respective sectors. In other words, these MNEs resemble and therefore are directly comparable with their counterparts based in developed economies in terms of size, global presence, and position in the global market. Secondly, at the same time, as their home country lacks a dominant status in the world economy, they might experience a “liability of origin,” which refers to the distinctive challenges or disadvantages stemming from their national origins (Bartlett and Ghoshal, 2000, Chang et al., 2009, Chung et al., 2012, Glover and Wilkinson, 2007 and Ramachandran and Pant, 2010). Hence understanding the current state of their international HRM reveals insights, not just for subsequent cohorts of MNEs from newly industrialized economies and emerging markets, but also for the general domain of contemporary MNEs in general. We argue it is particularly important to see whether South Korean MNEs adopt a distinctive approach to subsidiary-HRM practices, which may call into question the current dominant assumptions about HRM strategy and practice in MNEs, as these assumptions are predominantly informed by what is known about MNEs based in developed countries. An understanding of how South Korean MNEs approach their global people management is critical to debates on the possible emergence of an “Asia Pacific model of HRM” (Dowling & Donnelly, 2013, p. 172). We present the findings of a study that examines parent companies’ approach to subsidiary-HRM practices of nine Korean MNEs, all of which enjoy internationally competitive positions in their respective sectors. The major part of study is based on thirty interviews with HR executives and senior managers from the corporate headquarters directly responsible for the development and implementation of the IHRM strategy in the firms. As one part of the interview process, we used a structured-interview instrument designed to examine the different orientations toward global standardization and localization at the detailed element level within each of five HRM practice areas across the nine MNEs (job and grade, recruitment and selection, training and development, performance management, compensation and benefits). In total we gathered data on each of forty-seven elements about which decisions needed to be made with regard to global standardization or localization: nine for job and grade system, six for recruitment and selection, six for learning and development, sixteen for performance management, and ten for compensation and benefits. In our findings, we show that the IHRM approaches of the Korean MNEs are best captured by a distinctive approach of hybridization across these elements of individual HRM practices, rather than more wholesale orientations of “global standardization” or “localization”. The remainder of the paper is structured as follows. First, we present the currently dominant understanding and assumptions in research on the IHRM strategy of MNEs. After a discussion of our research methodology and an introduction of the case organizations, the empirical findings are presented. We then offer an interpretation of the findings with reference to existing theoretical assumptions, and conclude with a discussion of the contribution of the study and its limitations, as well as suggestions for future research.