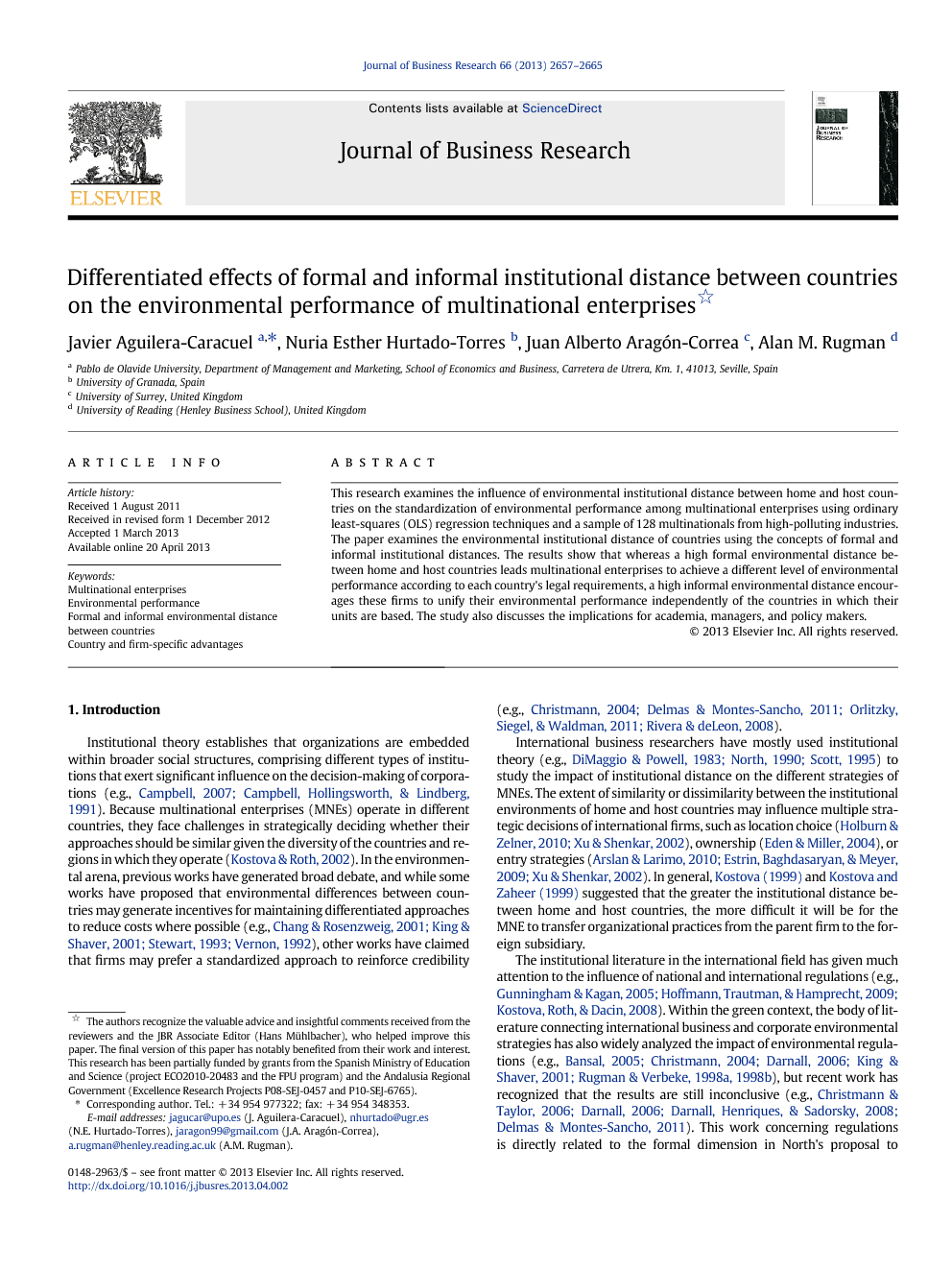 Institutional theory establishes that organizations are embedded within broader social structures, comprising different types of institutions that exert significant influence on the decision-making of corporations (e.g., Campbell, 2007 and Campbell et al., 1991). Because multinational enterprises (MNEs) operate in different countries, they face challenges in strategically deciding whether their approaches should be similar given the diversity of the countries and regions in which they operate (Kostova & Roth, 2002). In the environmental arena, previous works have generated broad debate, and while some works have proposed that environmental differences between countries may generate incentives for maintaining differentiated approaches to reduce costs where possible (e.g., Chang and Rosenzweig, 2001, King and Shaver, 2001, Stewart, 1993 and Vernon, 1992), other works have claimed that firms may prefer a standardized approach to reinforce credibility (e.g., Christmann, 2004, Delmas and Montes-Sancho, 2011, Orlitzky et al., 2011 and Rivera and deLeon, 2008). International business researchers have mostly used institutional theory (e.g., DiMaggio and Powell, 1983, North, 1990 and Scott, 1995) to study the impact of institutional distance on the different strategies of MNEs. The extent of similarity or dissimilarity between the institutional environments of home and host countries may influence multiple strategic decisions of international firms, such as location choice (Holburn and Zelner, 2010 and Xu and Shenkar, 2002), ownership (Eden & Miller, 2004), or entry strategies (Arslan and Larimo, 2010, Estrin et al., 2009 and Xu and Shenkar, 2002). In general, Kostova (1999) and Kostova and Zaheer (1999) suggested that the greater the institutional distance between home and host countries, the more difficult it will be for the MNE to transfer organizational practices from the parent firm to the foreign subsidiary. The institutional literature in the international field has given much attention to the influence of national and international regulations (e.g., Gunningham and Kagan, 2005, Hoffmann et al., 2009 and Kostova et al., 2008). Within the green context, the body of literature connecting international business and corporate environmental strategies has also widely analyzed the impact of environmental regulations (e.g., Bansal, 2005, Christmann, 2004, Darnall, 2006, King and Shaver, 2001, Rugman and Verbeke, 1998a and Rugman and Verbeke, 1998b), but recent work has recognized that the results are still inconclusive (e.g., Christmann and Taylor, 2006, Darnall, 2006, Darnall et al., 2008 and Delmas and Montes-Sancho, 2011). This work concerning regulations is directly related to the formal dimension in North's proposal to delimitate the national environment (North, 1990), but research has not considered the informal dimension in North's proposal (which is more related to values and culture in the country) so far. Previous contradictory findings regarding the relation between institutional distance and the level of homogeneity in the MNEs' environmental approaches may be due to their focus on formal institutions, with little regard for informal ones. For example, similar national environmental regulations do not necessarily imply a similar degree of environmental development in the two countries because they may place different levels of social priority on the enforcement of environmental regulations (Christmann and Taylor, 2001 and Dasgupta et al., 2000). Little effort has been made to take into account informal institutional elements at the country-level as they relate to environmental issues (e.g., Darnall, 2006, Darnall, 2009 and Delmas and Montes-Sancho, 2011; Hoffman, 1999). The study here makes at least two contributions. First, this study extends previous literature on the influence of institutional distance by showing that different institutional dimensions should be taken into consideration to explain the strategies of MNEs and that each one may have a specific impact on the firms' approaches. Explicit attention will not only be given to the formal aspects of institutional distance but also to the most informal features. Second, this research answers the call to analyze the influence of institutional dimensions on specific domains. Previous literature emphasizes that institutional distance must be measured with reference to the related institutional context (e.g., Busenitz, Gomez, & Spencer, 2000). The study here focuses on the green context; the study extends recent attention in this field (Aguilera-Caracuel, Aragón-Correa, Hurtado-Torres, & Rugman, 2012) by offering a general framework that includes differentiated analysis of the effects of the formal and informal environmental distances between home and host countries. In addition, we incorporate the term, “environmental performance standardization,” to refer to a scenario in which the MNEs' facilities operating in different countries reach similar levels of environmental impact. Based on a sample of 128 MNEs in three different industries with headquarters and subsidiaries based in the USA, Canada, France, and Spain, the results show that not all the dimensions of environmental institutional distance have the same influence on the standardization of environmental performance within an MNE. A high informal environmental distance between home and host countries encourages the MNEs to standardize their environmental performance, whereas a high formal environmental distance drives the MNEs to adapt their environmental performance according to each country's institutional requirements. This paper proceeds with a theoretical review in Section 2. Section 3 proposes the hypotheses. The fourth and fifth sections report on the methodology and describe the empirical results, respectively. Section 6 offers a discussion and conclusions.