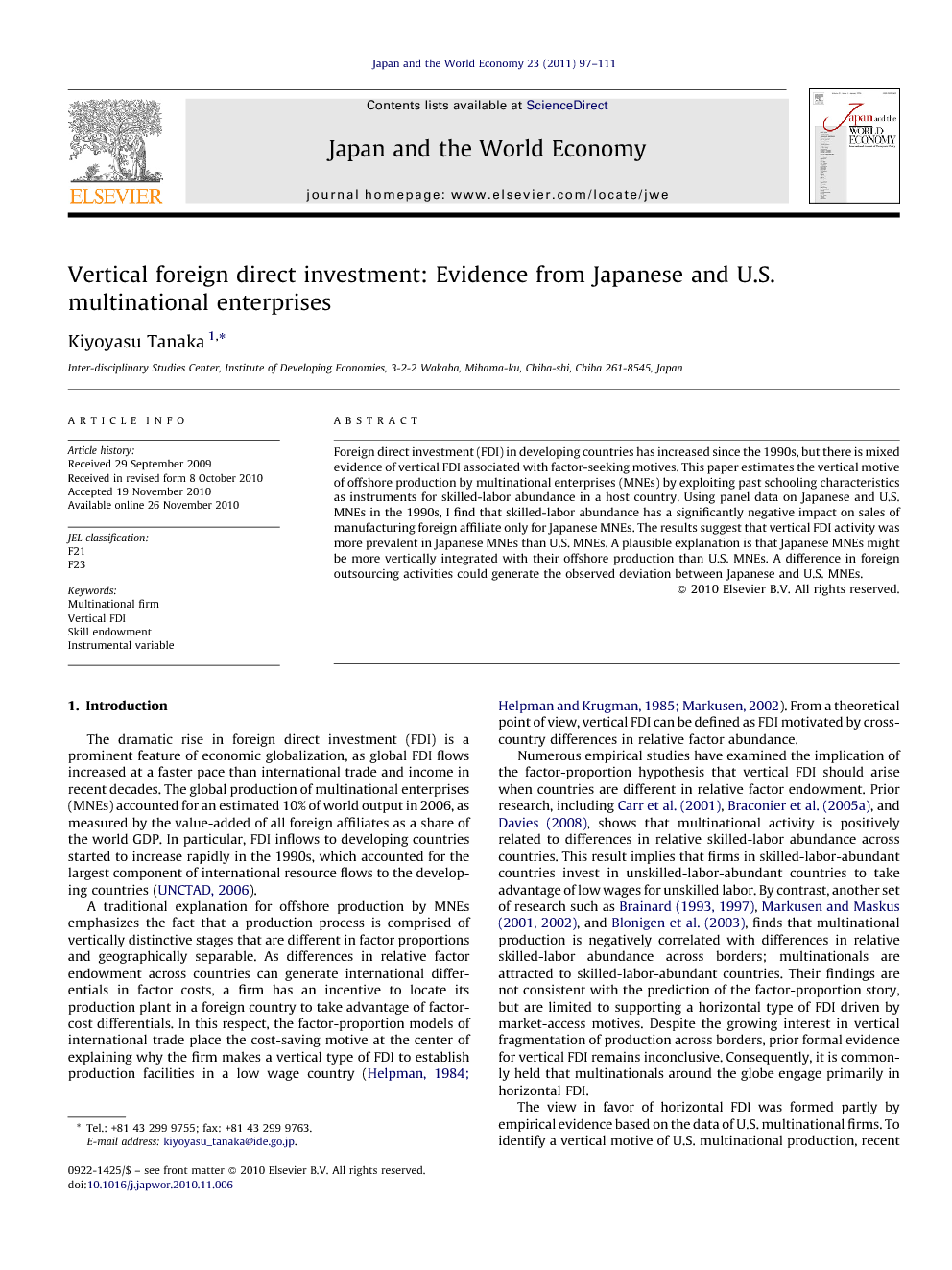 Foreign direct investment (FDI) in developing countries has increased since the 1990s, but there is mixed evidence of vertical FDI associated with factor-seeking motives. This paper estimates the vertical motive of offshore production by multinational enterprises (MNEs) by exploiting past schooling characteristics as instruments for skilled-labor abundance in a host country. Using panel data on Japanese and U.S. MNEs in the 1990s, I find that skilled-labor abundance has a significantly negative impact on sales of manufacturing foreign affiliate only for Japanese MNEs. The results suggest that vertical FDI activity was more prevalent in Japanese MNEs than U.S. MNEs. A plausible explanation is that Japanese MNEs might be more vertically integrated with their offshore production than U.S. MNEs. A difference in foreign outsourcing activities could generate the observed deviation between Japanese and U.S. MNEs.

This paper empirically reconsiders a factor-seeking motivation of FDI made by multinational firms that engage in vertical fragmentation of their production processes across borders. The role of international differentials in factor cost in FDI is analyzed in the general-equilibrium framework of international trade, which produces the testable implication that multinational production should arise from cross-country differences in relative factor abundance. To identify the vertical motive of FDI, this paper estimates the relationship between foreign production of multinationals and skilled-labor abundance in host countries after accounting for a wide variety of alternative motivations of direct investment including market-seeking FDI. Specifically, I examine the general importance of vertical FDI by Japanese and U.S. MNEs in the harmonized empirical framework by using panel data on foreign affiliate sales by Japanese and U.S. parent firms in the 1990s. A systematic deviation between the data sources is carefully addressed to characterize the patterns of offshore production by Japanese and U.S. multinationals. In addition, this paper explores a causal relationship between multinational activity and skill endowments by exploiting differences in past schooling characteristics as instruments for the contemporaneous level of skilled-labor abundance. Robust to a wide variety of sensitivity checks and endogeneity bias, I find that Japanese affiliate sales in manufacturing are larger in relatively unskilled-labor-abundant countries. The benchmark result shows that affiliate sales are predicted to increase by about 25% when the average years of schooling in a host country decrease by one year. In the instrumental-variable estimation that controls for possible endogeneity of host-country skill endowments, the impact of unskilled labor in a foreign country is estimated to be significantly larger in magnitude. Because statistical tests give support for the validity of the instruments, it is possible to interpret the estimates as suggesting the causal effect of unskilled-labor abundance. Further, the similar direction of bias is observed in a wide variety of alternative specifications, so that an endogeneity problem is likely to produce a downward bias in the role of host-country unskilled labor. These findings are consistent with the prediction of the factor-endowment hypothesis that multinational firms should locate unskilled-labor-intensive production to unskilled-labor-abundant countries. In contrast, I find little evidence that host-country skill endowments influence the cross-country pattern of U.S. affiliate sales in manufacturing. This conclusion does not change even after accounting for the endogeneity bias and a number of other determinants. Taken together, this paper demonstrates that vertical FDI activity is widespread in the case of manufacturing foreign affiliates by Japanese firms. The contrasting findings on vertical FDI between Japanese and U.S. MNEs have implications for future research. In particular, this paper provides possible explanations for the observed deviation in cross-country variation of Japanese and U.S. multinational sales. Among alternative explanations, a plausible hypothesis highlights the fact that the data on foreign affiliates of multinationals do not take into account outsourcing activities between multinationals and foreign contract manufactures. The exclusion of foreign outsourcing from offshore production by multinationals could be a crucial source of the deviation if U.S. multinationals are likely to choose outsourcing for unskilled-labor-intensive production in a foreign market, but Japanese multinationals tend to be vertically integrated with their offshore plants. A further investigation on this issue needs a comprehensive dataset on foreign outsourcing and affiliate production that are part of global supply chains developed by multinational firms from multiple country sources. A comparison of foreign outsourcing activities between Japanese and U.S. firms would shed light on the structural differences in the vertical fragmentation of their production processes across countries. Additionally, the recent trade literature highlights heterogeneity in firm characteristics in accounting for the pattern of trade and investment. In this respect, there remains to examine the role of firm-level characteristics in vertical FDI activity.