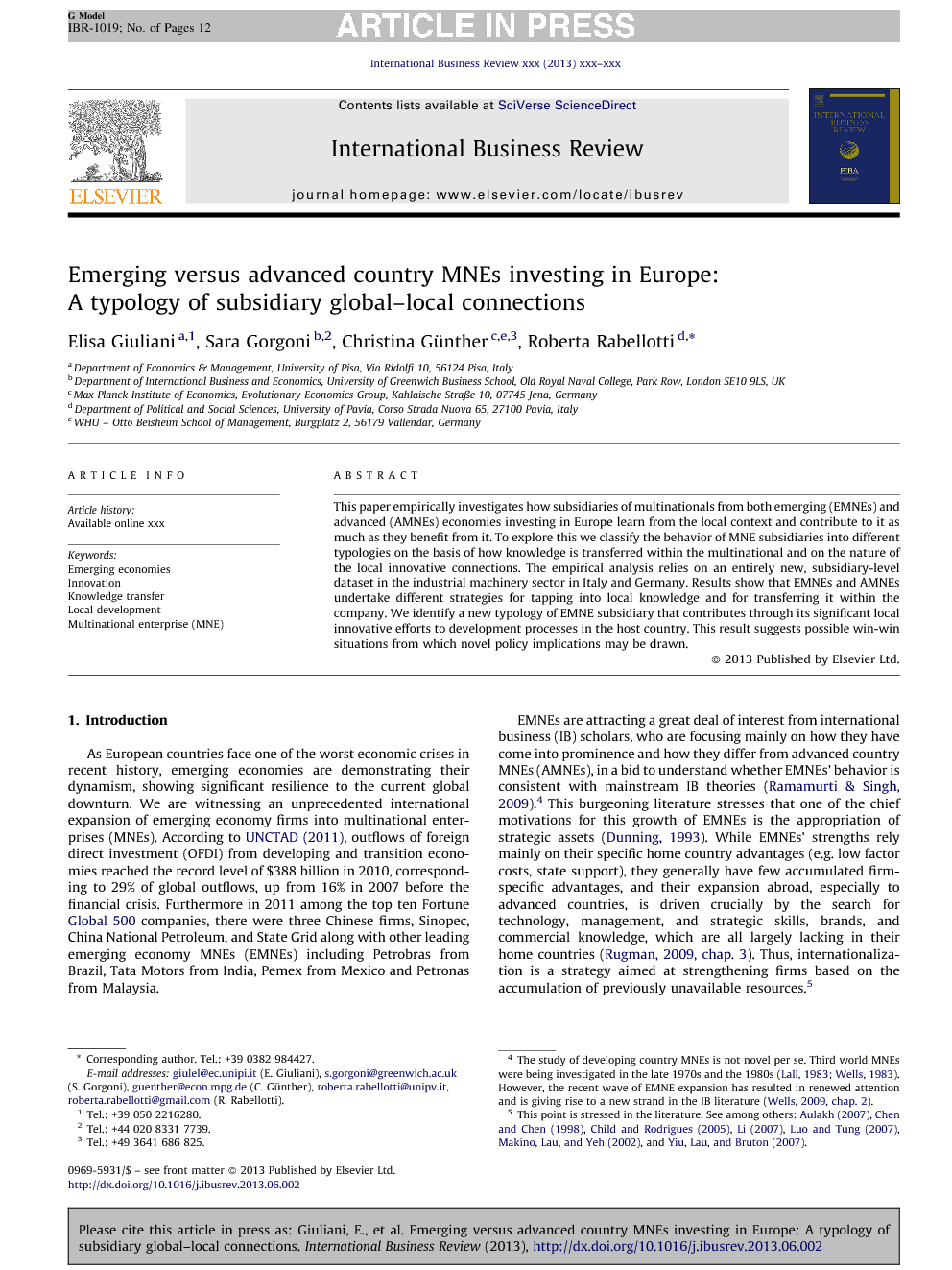 This paper empirically investigates how subsidiaries of multinationals from both emerging (EMNEs) and advanced (AMNEs) economies investing in Europe learn from the local context and contribute to it as much as they benefit from it. To explore this we classify the behavior of MNE subsidiaries into different typologies on the basis of how knowledge is transferred within the multinational and on the nature of the local innovative connections. The empirical analysis relies on an entirely new, subsidiary-level dataset in the industrial machinery sector in Italy and Germany. Results show that EMNEs and AMNEs undertake different strategies for tapping into local knowledge and for transferring it within the company. We identify a new typology of EMNE subsidiary that contributes through its significant local innovative efforts to development processes in the host country. This result suggests possible win-win situations from which novel policy implications may be drawn.

As European countries face one of the worst economic crises in recent history, emerging economies are demonstrating their dynamism, showing significant resilience to the current global downturn. We are witnessing an unprecedented international expansion of emerging economy firms into multinational enterprises (MNEs). According to UNCTAD (2011), outflows of foreign direct investment (OFDI) from developing and transition economies reached the record level of $388 billion in 2010, corresponding to 29% of global outflows, up from 16% in 2007 before the financial crisis. Furthermore in 2011 among the top ten Fortune Global 500 companies, there were three Chinese firms, Sinopec, China National Petroleum, and State Grid along with other leading emerging economy MNEs (EMNEs) including Petrobras from Brazil, Tata Motors from India, Pemex from Mexico and Petronas from Malaysia. EMNEs are attracting a great deal of interest from international business (IB) scholars, who are focusing mainly on how they have come into prominence and how they differ from advanced country MNEs (AMNEs), in a bid to understand whether EMNEs’ behavior is consistent with mainstream IB theories (Ramamurti & Singh, 2009).4 This burgeoning literature stresses that one of the chief motivations for this growth of EMNEs is the appropriation of strategic assets (Dunning, 1993). While EMNEs’ strengths rely mainly on their specific home country advantages (e.g. low factor costs, state support), they generally have few accumulated firm-specific advantages, and their expansion abroad, especially to advanced countries, is driven crucially by the search for technology, management, and strategic skills, brands, and commercial knowledge, which are all largely lacking in their home countries (Rugman, 2009, chap. 3). Thus, internationalization is a strategy aimed at strengthening firms based on the accumulation of previously unavailable resources.5 The keenness of EMNEs to acquire high-value strategic assets in advanced economies has generated considerable interest, concern, and controversy worldwide. The rapid expansion of EMNEs is viewed with a mix of hope and fear: on the one hand, inputs of fresh capital are welcomed by host countries, especially in these times of low growth; on the other hand, there are reservations, especially in the case of Chinese investments, that foreign investments are an expression of the investing country's or state's interest in gaining control over advanced economy strategic assets and infrastructures, which is also causing concern related to loss of dominance in key technological capabilities. These mixed sentiments are often based on scanty information and individual interpretations and we argue that there is an urgent need for more empirical research to provide a better understanding of this phenomenon. Questions are being asked about how strategic assets are being acquired, and whether EMNEs are displaying a predatory ‘take-and-leave’ behavior or are contributing to the development trajectories of advanced host economies. There is a rapidly growing literature on EMNEs’ strategies and motivations for investing in advanced economies, which is based mainly on firm case studies (see among others Liu and Li, 2002 and Zhang and Filippov, 2009), on descriptive investigations of specific host countries (e.g. on Germany, Schüler-Zhou & Schüller, 2009; on Italy, Pietrobelli, Rabellotti, & Sanfilippo, 2011; on the UK, Cross and Voss, 2008 and Liu and Tian, 2008), and on particular industries (e.g. on India's pharmaceutical sector, Athreye & Godley, 2009, and steel industry, Kumar & Chadha, 2009). There are also some econometric studies, many of which are based on aggregate Chinese FDI data, that explore the importance of different motivations, including the search for strategic assets (Amighini et al., 2011, Buckley et al., 2007, Kolstad and Wiig, 2012 and Pradhan, 2009). However, little attention has so far been paid to understanding the impact of EMNEs on the local contexts of advanced country host economies, and there is little existing micro-level empirical research on this topic. This paper addresses this gap in the literature by exploring empirically, using both quantitative and qualitative evidence, the following research questions: How do EMNE subsidiaries investing in Europe learn from the local context, and do they contribute to it as much as they benefit from it? How does their behavior differ from that of AMNEs? To investigate these questions we develop a novel conceptual framework (Section 2), to classify the behavior of MNE subsidiaries into different typologies on the basis of how knowledge is transferred within the MNE and on the level of local innovative connections, which is in line with earlier research in this field (Lorenzen and Mudambi, 2010, Marin and Giuliani, 2011 and Mudambi and Swift, 2012). The empirical analysis relies on an entirely new subsidiary-level dataset, which includes EMNEs and AMNEs operating in the industrial machinery sectors in Italy and Germany (see Section 3 for the methodology). Our results show that EMNEs and AMNEs adopt different strategies for tapping into local knowledge and diffusing it within the company (Section 4). Besides, beyond confirming the existence of predatory attitudes among EMNEs, we highlight a different typology of EMNE subsidiaries that contributes to the host country's development processes through its significant local innovative efforts. This suggests a new view of EMNEs in advanced countries and the possibility of an interesting win-win situation, which has some important implications for policy (Section 5).

This paper investigates the behavior of EMNE subsidiaries investing in Europe in terms of their innovative contributions both to the corporation and the local host territory. Alongside potential conflict situations connected to the predatory behavior of some aggressive investors, we have detected prospects of opportunities for mutually reinforcing collaborations between emerging and advanced (host) country companies, managers, and entrepreneurs. Our study contributes to the growing IB literature on the impact of MNEs on host countries and their local economies (e.g. Beugelsdijk et al., 2010, Buckley and Ghauri, 2004 and Piscitello and Santangelo, 2007), whose concern is about how the increasing power of large global corporations will shape – sometimes in a detrimental way – our society and economy. While the impact of MNE operations on host countries has been traditionally at the core of development economics and IB studies have been mainly oriented at understanding the internal functioning of MNEs, this paper contributes further to that branch of the IB literature that studies the interactions between the MNEs and their host environments. Its original contribution stands also in reversing the conventional North-South perspective of most studies on MNEs’ economic impacts, which has long looked at AMNEs impacts on host developing countries and has assumed that AMNEs are superior to the domestic firms in the developing host countries, and, on these grounds, they are expected to generate a positive impact. Such a conventional model has been discarded in this paper, since our study shows that in a scenario characterized by growing foreign direct investments from emerging countries, AMNEs appear to play a very marginal role in relation to contributing to the local host economy and EMNE subsidiaries tend to be more entrepreneurial and more active. Hence, our study leads to reconsider the relevance of the technological superiority of MNEs as a key factor shaping the formation of innovative ties at the local level, pointing at the importance of subsidiary-centered activities and entrepreneurship, as also suggested by other scholars before us (Marin and Bell, 2006, Marin and Giuliani, 2011 and Marin and Sasidharan, 2010). Questions arise about whether EMNE subsidiaries will become credible actors that can be exploited by local economies. This leads to a further contribution of our work on EMNE strategies and our understanding of how global consolidator multinationals in mature, mid-tech industries appropriate or contribute to local strategic assets (Ramamurti, 2009, chap. 13). We have found that most of the EMNEs in our sample significantly contribute to the creation of firm-level advantages through reverse knowledge transfer and that an unexpectedly high number of firms also contribute to generate mutually enriching opportunities for the corporation and the local context. This somewhat mitigates the dire scenario often associated with the view of EMNE subsidiaries as predatory actors. Policy makers should benefit from a better understanding of EMNE behaviors in Europe in order to minimize predatory investment, attract new investment, and encourage win-win situations. World Trade Organization agreements have made it unviable to force MNE subsidiaries to form local linkages, e.g. through local content policies and the like, but networking opportunities involving the new investor and the host actors should be stimulated and encouraged. This would reduce predatory behavior and open up opportunities for advanced host country managers and entrepreneurs to learn from new investors, which could be exploited to bridge the cultural and market distance with emerging economies. This paper has some limitations. Although it throws light on certain micro-level behaviors of EMNE subsidiaries, it does not provide answers to some other questions. Why do Predatory subsidiaries behave so differently from Dual subsidiaries? Are these differences due to intra-firm conditions (e.g. corporate culture) or to the local conditions in the host country (e.g. existence of appropriate local partners for the formation of ties)? And, what is the impact of reverse knowledge transfer on the headquarters? On what factors (e.g. absorptive capacities, skills, market similarities) does the assimilation of transferred knowledge depend? Are there differences in performance among the different category of subsidiaries? Furthermore, the empirical evidence collected is a snapshot while it will be interesting to investigate if local embeddedness is changing after some time that companies have been acquired. Since this is a case study, it focuses on only one sector and two contexts. However, we believe our findings provide new empirical evidence adding to the debate on the dramatic expansion of EMNEs, and it is informative for other advanced economy industries. Accessing detailed and complex information on EMNE subsidiaries is both time costly and problematic, and often limits sample sizes. This study introduces the idea of EMNE investment as a positive sum game where both the emerging and advanced countries benefit. Further empirical research is needed to understand the conditions that will make a win-win situation and mutual advantages more likely.