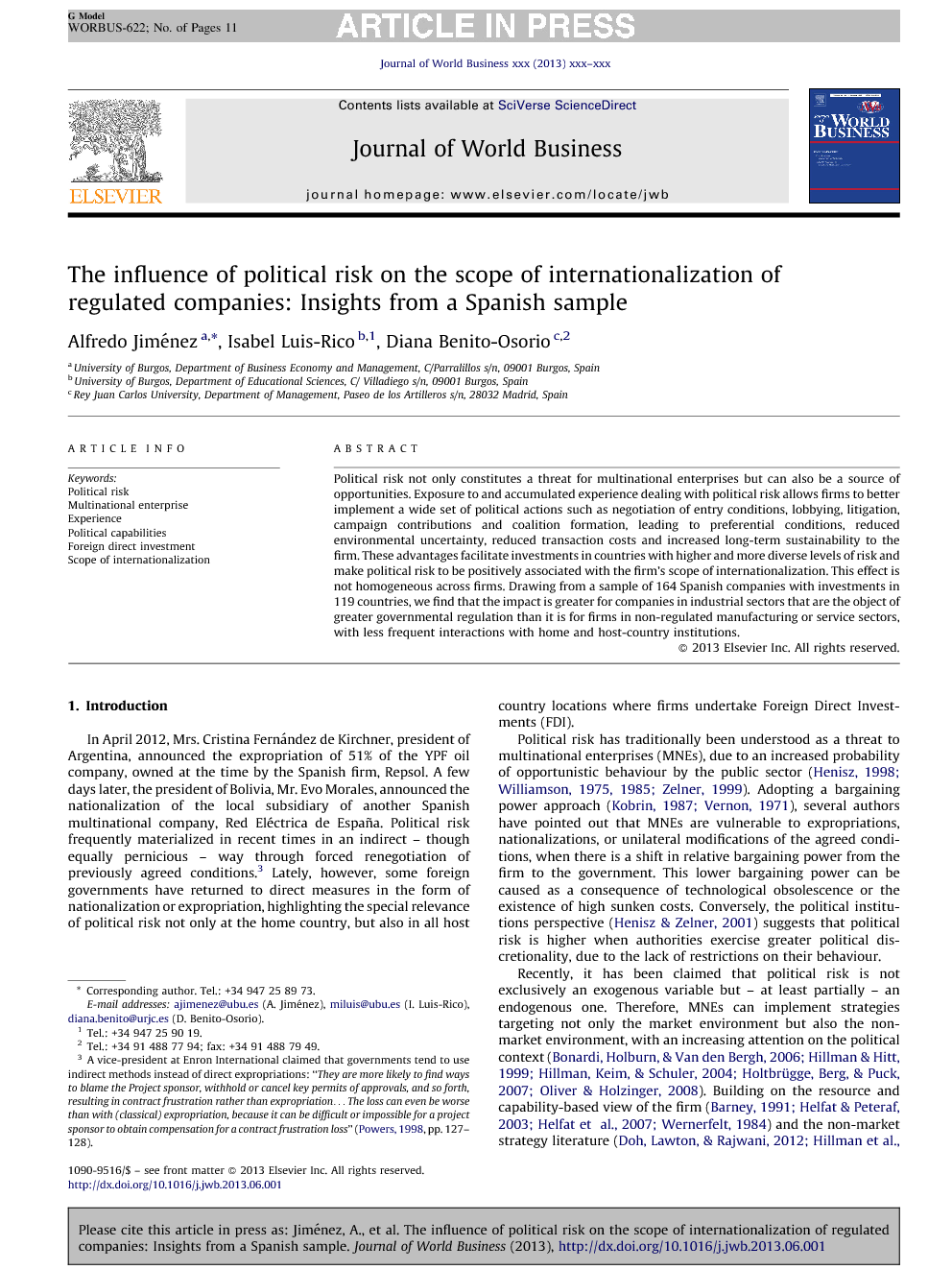 Political risk not only constitutes a threat for multinational enterprises but can also be a source of opportunities. Exposure to and accumulated experience dealing with political risk allows firms to better implement a wide set of political actions such as negotiation of entry conditions, lobbying, litigation, campaign contributions and coalition formation, leading to preferential conditions, reduced environmental uncertainty, reduced transaction costs and increased long-term sustainability to the firm. These advantages facilitate investments in countries with higher and more diverse levels of risk and make political risk to be positively associated with the firm's scope of internationalization. This effect is not homogeneous across firms. Drawing from a sample of 164 Spanish companies with investments in 119 countries, we find that the impact is greater for companies in industrial sectors that are the object of greater governmental regulation than it is for firms in non-regulated manufacturing or service sectors, with less frequent interactions with home and host-country institutions.

The present study has analyzed the influence of political risk in the internationalization strategy of Spanish MNEs, paying special attention to the relevance of the industry to which the firm belongs. Despite the fact that political risk has traditionally been considered a threat for MNEs, we suggest that exposure to and previous experience dealing with political risk can be useful sources to create political capabilities to, among other actions, negotiate, lobby and obtain preferential conditions in countries characterized by high levels of political discretionality or corruption. This facilitates FDI, even if the coordination of operations in a more diverse portfolio of political environments is more complicated. We found that there is a positive relationship between political risk and a firm's scope of internationalization. This relationship does not have the same impact across all firms. In fact, it will be stronger in those companies belonging to industries subjected to higher levels of regulation by the authorities. This is due to the fact that previous experience accumulated in earlier interactions with governments, either in foreign countries or at home, helps firms to create and develop political capabilities especially in sector where exposure to political risk is higher. In contrast, political capabilities are relatively underdeveloped in those firms belonging to non-regulated manufacturing or service industries where exposure is lower, because regulation has a less salient role and the interactions with authorities are less frequent. We have contributed to the literature on the role of institutions (North, 1981 and North, 1990), by explaining how the institutional environment, in this case the political context, affects corporate strategy and how this influence varies depending on the type of firm. The combined analysis of institutions and strategic management, as conducted in this paper, leads to a deeper and a more complete understanding of corporate behaviour and its environment (Cuervo-Cazurra & Dau, 2009). We have also contributed to the study of political risk and political capabilities by showing that not all firms are equally affected. Instead, those MNEs which belong to regulated industries tend to develop these capabilities more frequently compared to non-regulated industries. This result is consistent with the approach found in the literature, which has paid special attention to this particular set of industries (Fernández-Méndez et al., 2011, García-Canal and Guillén, 2008, Henisz and Zelner, 2001, Henisz and Zelner, 2002, Holburn, 2001, Lawton and Rajwani, 2011 and Lawton et al., 2013). In addition, we have also shown that political capabilities allow firms to invest in locations where the level of risk is higher, and also facilitate the management and coordination of an FDI portfolio characterized by a higher location diversity from which the firms can benefit.