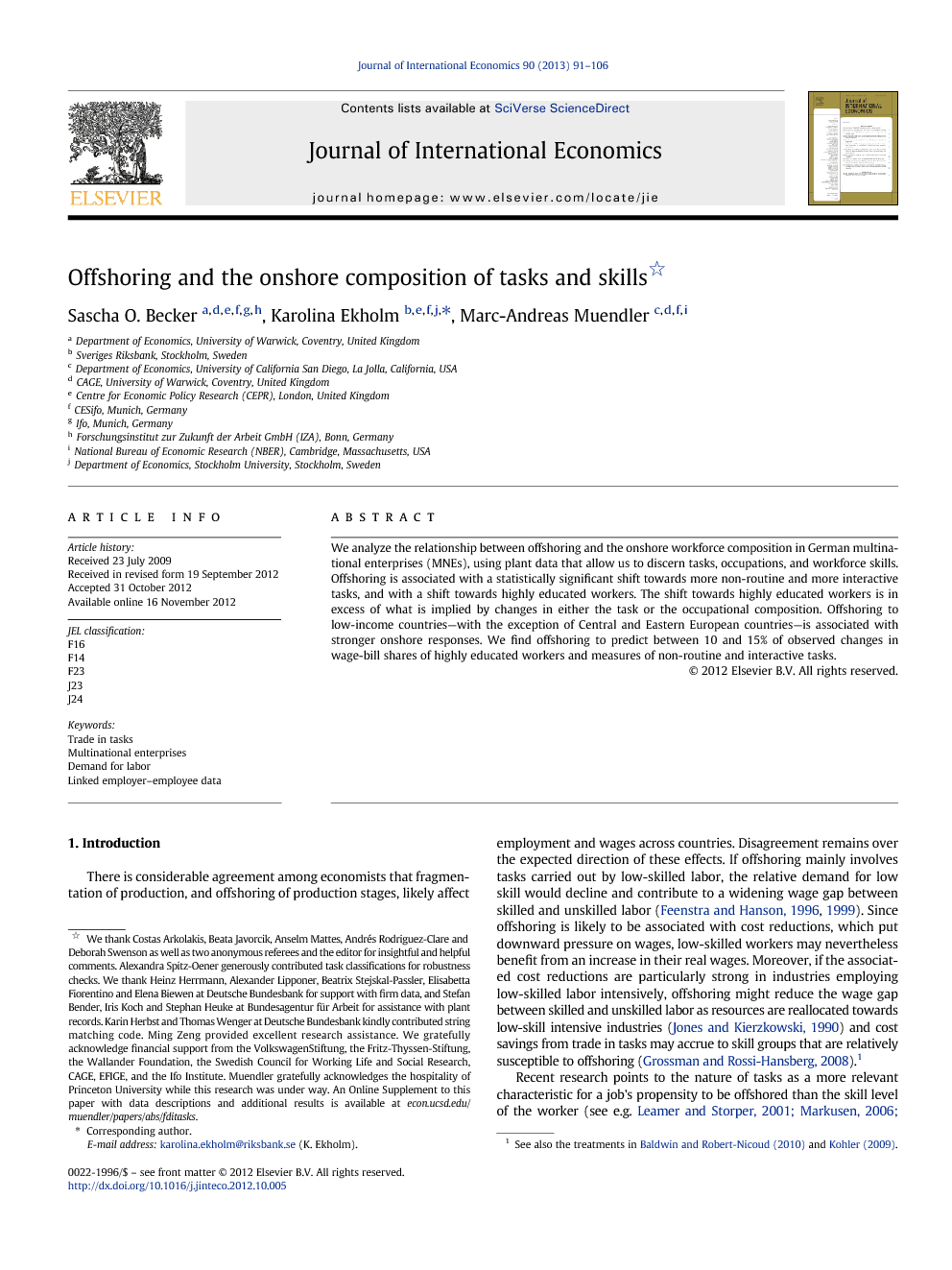 We analyze the relationship between offshoring and the onshore workforce composition in German multinational enterprises (MNEs), using plant data that allow us to discern tasks, occupations, and workforce skills. Offshoring is associated with a statistically significant shift towards more non-routine and more interactive tasks, and with a shift towards highly educated workers. The shift towards highly educated workers is in excess of what is implied by changes in either the task or the occupational composition. Offshoring to low-income countries—with the exception of Central and Eastern European countries—is associated with stronger onshore responses. We find offshoring to predict between 10 and 15% of observed changes in wage-bill shares of highly educated workers and measures of non-routine and interactive tasks.

Using novel plant-level data for German MNEs and detailed work-survey information on tasks, this paper analyzes the relationship between offshore employment and the onshore workforce composition. Results show that tasks capture a distinct dimension of workforce composition, only partly related to conventional workforce characteristics on educational attainment and white-collar or blue-collar occupations. There is a marked employment shift towards non-routine and interactive tasks at MNEs. Regression analysis shows that offshore employment is a significant predictor of the wage-bill shares of non-routine and interactive tasks for manufacturing as well as services. The onshore employment response is more closely associated with offshoring to low-income countries outside Europe than to high-income countries. However, the wage-bill share of highly educated workers also responds to offshoring, and the observed task recomposition cannot fully explain the educational upgrading at MNEs. Similar to earlier evidence on skill demand responses to offshoring, our estimates for both task and skill responses suggest that offshoring predicts around 10–15% of the actual changes in wage-bill shares. Several interpretations are consistent with the finding that in-house offshoring predicts only a small recomposition towards non-routine and interactive tasks and only a small shift in onshore demand towards highly educated workers. We base estimates on variation within plants over time, conditioning on plant and time effects. Large workforce recompositions may take place when national firms become MNEs, whereas effects after MNE entry can be small. Time indicators are highly significant predictors of the workforce composition and suggest that common shocks across firms are important elements of workforce changes. It remains an open question beyond our identification strategy whether time-varying effects are mostly related to technical change, to management practices, to offshoring, or a combination of these and other factors.