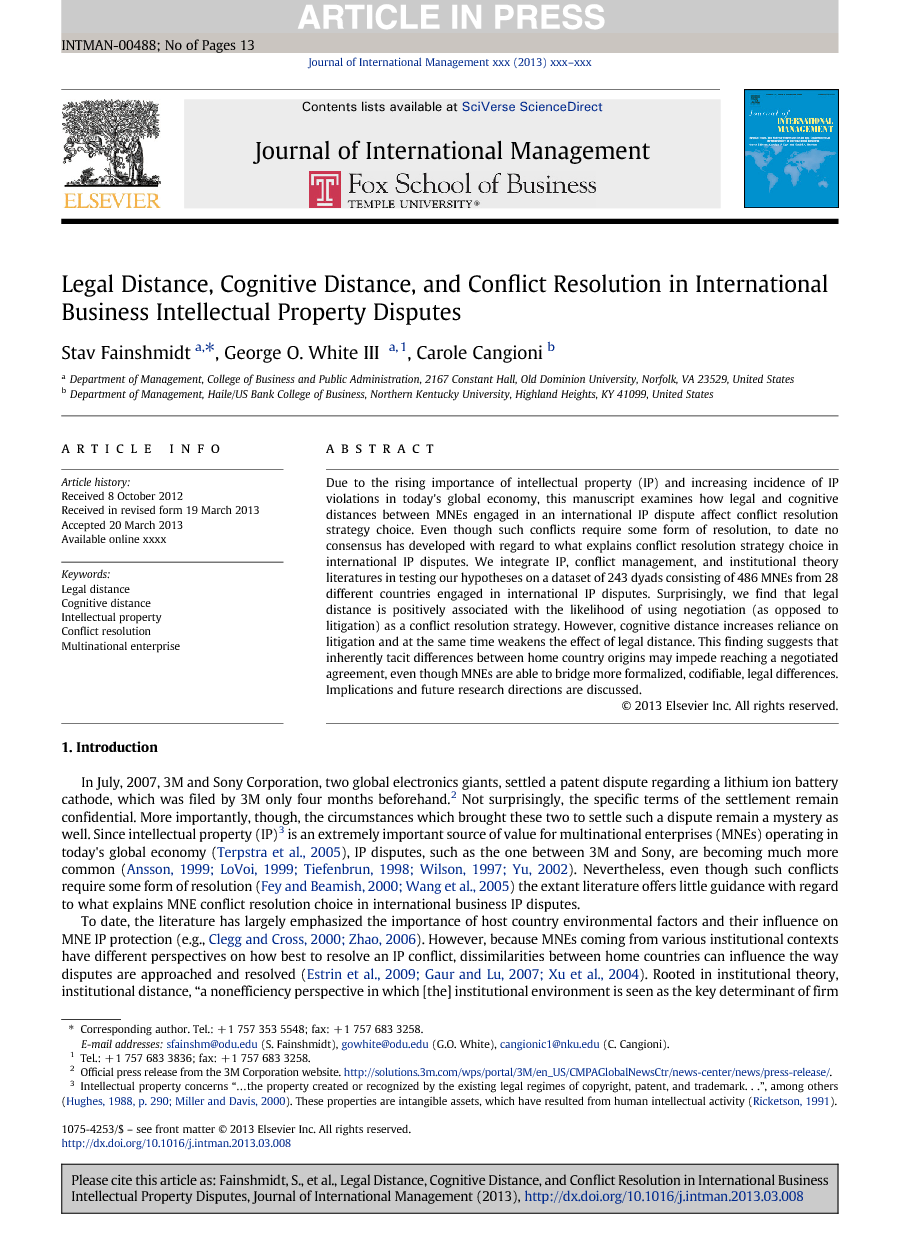 Due to the rising importance of intellectual property (IP) and increasing incidence of IP violations in today's global economy, this manuscript examines how legal and cognitive distances between MNEs engaged in an international IP dispute affect conflict resolution strategy choice. Even though such conflicts require some form of resolution, to date no consensus has developed with regard to what explains conflict resolution strategy choice in international IP disputes. We integrate IP, conflict management, and institutional theory literatures in testing our hypotheses on a dataset of 243 dyads consisting of 486 MNEs from 28 different countries engaged in international IP disputes. Surprisingly, we find that legal distance is positively associated with the likelihood of using negotiation (as opposed to litigation) as a conflict resolution strategy. However, cognitive distance increases reliance on litigation and at the same time weakens the effect of legal distance. This finding suggests that inherently tacit differences between home country origins may impede reaching a negotiated agreement, even though MNEs are able to bridge more formalized, codifiable, legal differences. Implications and future research directions are discussed.

In July, 2007, 3M and Sony Corporation, two global electronics giants, settled a patent dispute regarding a lithium ion battery cathode, which was filed by 3M only four months beforehand.2 Not surprisingly, the specific terms of the settlement remain confidential. More importantly, though, the circumstances which brought these two to settle such a dispute remain a mystery as well. Since intellectual property (IP)3 is an extremely important source of value for multinational enterprises (MNEs) operating in today's global economy (Terpstra et al., 2005), IP disputes, such as the one between 3M and Sony, are becoming much more common (Ansson, 1999, LoVoi, 1999, Tiefenbrun, 1998, Wilson, 1997 and Yu, 2002). Nevertheless, even though such conflicts require some form of resolution (Fey and Beamish, 2000 and Wang et al., 2005) the extant literature offers little guidance with regard to what explains MNE conflict resolution choice in international business IP disputes. To date, the literature has largely emphasized the importance of host country environmental factors and their influence on MNE IP protection (e.g., Clegg and Cross, 2000 and Zhao, 2006). However, because MNEs coming from various institutional contexts have different perspectives on how best to resolve an IP conflict, dissimilarities between home countries can influence the way disputes are approached and resolved (Estrin et al., 2009, Gaur and Lu, 2007 and Xu et al., 2004). Rooted in institutional theory, institutional distance, “a nonefficiency perspective in which [the] institutional environment is seen as the key determinant of firm structure and behavior” (Xu and Shenkar, 2002: 608), is a particularly appropriate theoretical framework to examine IP conflicts between MNEs. One of the most salient home country institutions that significantly affects decisions and behavior of MNEs operating in foreign environments is the rule of law (Li et al., 2012), which has been commonly defined as “the extent to which agents have confidence in and abide by the rules of society, and in particular the quality of contract enforcement, the police, and the courts, as well as the likelihood of crime and violence” (Roy and Oliver, 2009: 780; Kaufmann et al., 2006) Prior studies have shown that companies originating from countries with strong rule of law exhibit a higher propensity to comply with legal rules and regulation (Chong and Gradstein, 2011). More importantly, cross-country differences in legal context, such as the rule of law, have been found to influence MNE strategic decisions such as foreign market selection (Pogrebnyakov and Maitland, 2011 and Xu and Shenkar, 2002), entry mode choice (Estrin et al., 2009), and joint-venture partner selection (Roy and Oliver, 2009). In international conflict situations, legal distance, defined as the dissimilarity between rule of law of two countries (Cuervo-Cazurra and Genc, 2008 and White et al., 2013), may intensify difficulties of MNEs in adopting conflict strategy practices to a host country because differing levels of rule of law may entail unfamiliar prescriptions as to what legitimate action is in a foreign environment (Denk et al., 2012, Oxley and Yeung, 2001 and White et al., 2013). Similarly, differences between home and host country “cognitive structures and social knowledge shared by the people in a given country” (Kostova, 1997: 180) may result in failure to communicate effectively when in a dispute. We refer to these differences as cognitive distance (Xu and Shenkar, 2002), defined as differences in levels of workforce skills, education, and exposure to new technologies and societal contexts across countries (Estrin et al., 2009). Estrin et al. (2009: 1177) have argued that the greater the cognitive distance, “the larger the integration and coordination challenges” faced by MNEs. Based on this notion, we argue that the effect of legal distance on MNE conflict resolution behavior may also be contingent upon cognitive distance (Abdi and Aulak, 2012 and Meyer et al., 2009). This is because in the context of transnational IP disputes between MNEs, legal differences may be more difficult to bridge with increasing cognitive distance as “framings of situations conflict, basic values are challenged, and entrant and host find themselves on a different page” (Orr and Scott, 2008: 5). As such, in this manuscript we seek to further understand how legal and cognitive institutional dissimilarities across countries shape MNE choice in international IP conflict resolution practices. We suggest that the extent to which managers from two different formal institutional contexts are able to bridge differences—due to more extensive knowledge, exposure, and understanding of various institutional environments—may alter the impact of legal distance on MNE conflict strategy choice. Accordingly, by integrating institutional theory, IP, and conflict literatures, we ask the following research question: what influence will legal and cognitive distances have on MNE conflict resolution strategy choice in international business IP disputes? Lewicki et al. (2004) have suggested that, while various dispute resolution methods exist in practice, international conflict resolution choice between MNEs can be categorized into two broad categories: collaborative and contentious forms of conflict resolution choice ( Fey and Beamish, 2000 and Wang et al., 2005). We build on this notion by arguing that greater legal and cognitive distances will be associated with a higher likelihood of MNEs choosing contentious conflict resolution strategies in international business IP disputes. However, as presented in Fig. 1, we also argue that cognitive distance will strengthen the relationship between legal distance and the likelihood of MNEs choosing a contentious conflict resolution strategy.