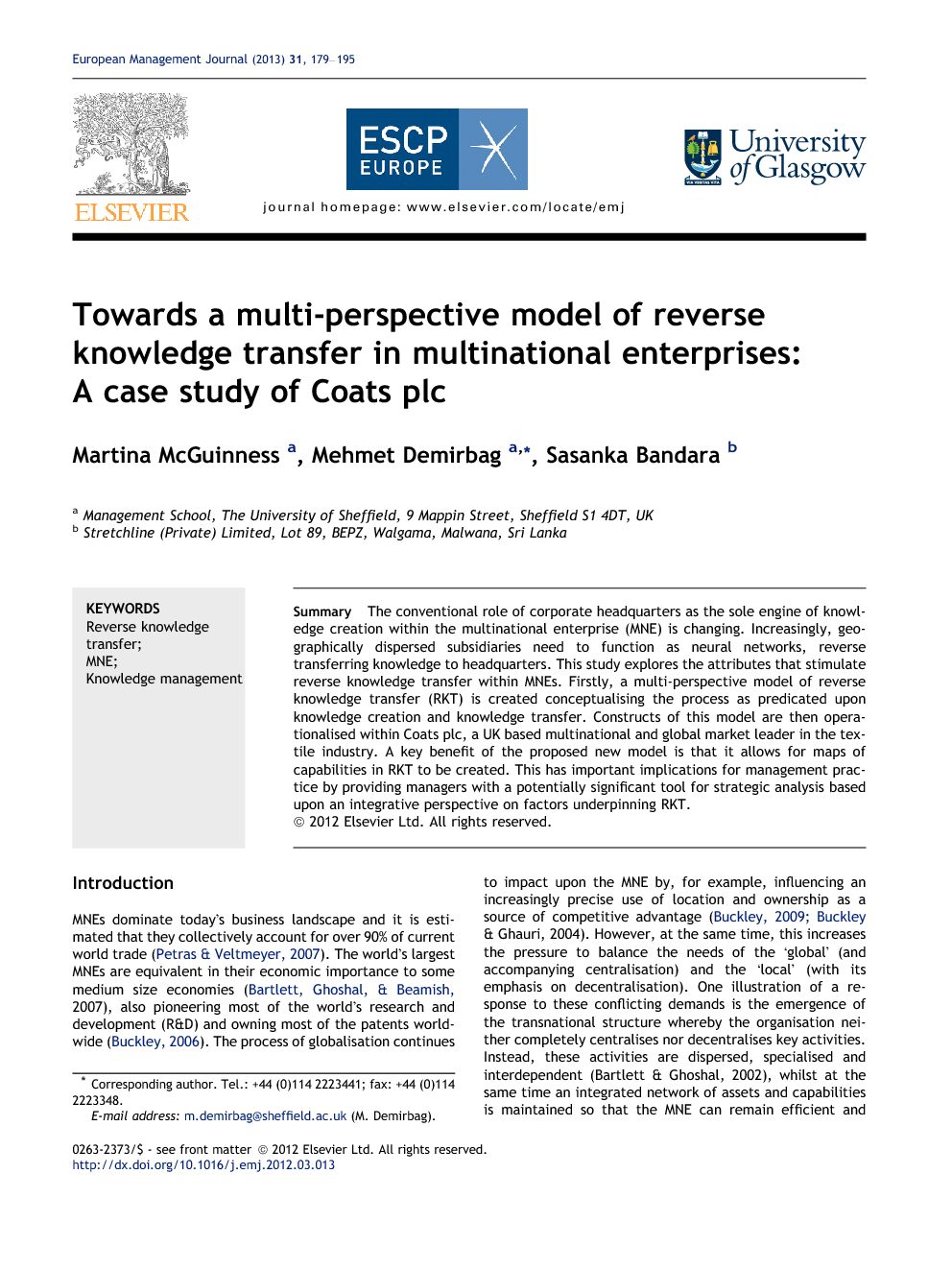 The conventional role of corporate headquarters as the sole engine of knowledge creation within the multinational enterprise (MNE) is changing. Increasingly, geographically dispersed subsidiaries need to function as neural networks, reverse transferring knowledge to headquarters. This study explores the attributes that stimulate reverse knowledge transfer within MNEs. Firstly, a multi-perspective model of reverse knowledge transfer (RKT) is created conceptualising the process as predicated upon knowledge creation and knowledge transfer. Constructs of this model are then operationalised within Coats plc, a UK based multinational and global market leader in the textile industry. A key benefit of the proposed new model is that it allows for maps of capabilities in RKT to be created. This has important implications for management practice by providing managers with a potentially significant tool for strategic analysis based upon an integrative perspective on factors underpinning RKT.

MNEs dominate today’s business landscape and it is estimated that they collectively account for over 90% of current world trade (Petras & Veltmeyer, 2007). The world’s largest MNEs are equivalent in their economic importance to some medium size economies (Bartlett, Ghoshal, & Beamish, 2007), also pioneering most of the world’s research and development (R&D) and owning most of the patents worldwide (Buckley, 2006). The process of globalisation continues to impact upon the MNE by, for example, influencing an increasingly precise use of location and ownership as a source of competitive advantage (Buckley, 2009 and Buckley and Ghauri, 2004). However, at the same time, this increases the pressure to balance the needs of the ‘global’ (and accompanying centralisation) and the ‘local’ (with its emphasis on decentralisation). One illustration of a response to these conflicting demands is the emergence of the transnational structure whereby the organisation neither completely centralises nor decentralises key activities. Instead, these activities are dispersed, specialised and interdependent (Bartlett & Ghoshal, 2002), whilst at the same time an integrated network of assets and capabilities is maintained so that the MNE can remain efficient and flexible. Globalisation means that factors of paramount importance to the MNE are technology, knowledge and capital rather than traditional assets such as land (Buckley, 2009 and Demirbag and Glaister, 2010). Capturing and leveraging these factors becomes increasing complex and challenging in the ‘global factory’ creating further difficulties in addressing the imperative to transfer knowledge effectively across organisational boundaries (Kogut & Zander, 1992). At the same time, effective knowledge transfer is vital for the MNE. Indeed, some commentators argue, the MNE owes its very existence to its superior ability to internally transfer knowledge, more effectively and efficiently than through market mechanisms (Foss and Pedersen, 2002 and Kogut and Zander, 1993). Clearly then, a key challenge for the MNE in the 21st century is to respond, proactively, to the inherent difficulties of effective knowledge transfer within the context of an ever shifting paradigm of globalisation. Traditional models of knowledge transfer as exemplified by the Hymer–Kindleberger approach (Hymer, 1976) focus upon the conventional forward transfer of knowledge from headquarters to foreign affiliates. However, one impact of globalisation is that knowledge transfer takes place across multiple dimensions (space, time, language, culture etc.) as well as in multiple directions (forward, backward and lateral). As an exemplar, empirical evidence shows that foreign direct investments decisions (FDI) can be driven (at least partially) by the desire to gain knowledge (Foss and Pedersen, 2002 and Frost, 2001). This presents the spectre of reverse knowledge transfer (RKT) as an important consideration in the MNE’s search for competitive advantage. A comprehensive review of recent publications indicates that RKT is emerging as an area of increasing interest to researchers (Michailova & Mustaffa, in press). This study adds, conceptually and empirically, to this burgeoning topic of research by developing and empirically analysing a conceptual framework for RKT. Further, whilst empirical research on knowledge transfer has been critiqued for being largely situated in developed economies (Buckley et al., 2003 and Yang et al., 2008), or predominantly Eastern Europe (Cui, Griffith, Cavusgil, & Dabic, 2006; Yang et al., 2008), this study presents data garnered from a case study of a British global MNE which spans RKT process from developed to developed economies (US–UK) as well as less developed to developed economies (Sri Lanka–UK; Turkey–UK). A case approach is particularly appropriate where data is gathered from cross-border and cross-cultural settings (Ghauri, 2004) and novel perspectives are offered with respect to the geographical (Michailova & Mustaffa, in press) and economic dimensions of the data utilised. From a methodological perspective, there is also some novelty in terms of the study’s empirical approach, given the under-utilisation of the case method in international business research (Marschan-Piekkari, 2004 and Welch et al., 2011). Finally, the use of the textile industry as the focus of the research offers significant benefits. This is a mature industry which has been subject to significant change resulting from the forces of globalisation and technological development and is highly competitive with manufacturing globally distributed (Buxey, 2005). This case study presents insights based upon data gathered from two of subsidiaries based in emerging economies for which the textile industry is of significant economic importance. Furthermore, although work has been carried out from a cross-industry perspective which includes mature industries (Piscitello and Rabbiosi, 2006 and Rabbiosi et al., 2007), there is a lack of empirical work on RKT focused solely in the textile manufacturing industry. Liberalisation and low production costs in less-developed and emerging economies have been influential in the locating of subsidiaries by the MNE, and consequently the effectiveness of knowledge transfer and, increasingly RKT, is of vital importance within the globally distributed textile industry (Nordås, 2004). This study actively integrates this industrial dimension by studying subsidiary RKT and thereby helps to explain mixed findings in the extant literature. Finally, Michailova and Mustaffa (in press) have highlighted the narrow representation of empirical work on subsidiaries across more than two countries. Our approach follows one of their suggested guidelines for future research by examining subsidiary knowledge flows in a diversified geographical context through an exploration of knowledge flows with respect to three geographically dispersed subsidiaries (US, Turkey and Sri Lanka) and its U.K headquarters.

Grounded in received theory, the study finds that RKT phenomena can be characterised by 18 variables, which can be grouped under the four main constructs of the potential to create knowledge, relevance of the knowledge created, ability to reverse transfer new knowledge and motivation to reverse transfer new knowledge. Results showed that on average, the value for relative RKT intensity calculated using the model vary by ±2.48% in comparison to the value for relative RKT intensity estimated based on the MD’s perception. The new multi-perspective model therefore, closely reflects reality. Interestingly, preliminary results also seem to have uncovered some weaknesses in Gupta and Govindarajan’s (1991) method of assigning mandates to subsidiaries. As in the previous section, the early work on RKT focused predominantly on innovation, R&D and technology transfer (Frost and Zhou, 2005 and Håkanson and Nobel, 2001). This paper attempts to bridge some of these gaps by building upon previous work in knowledge management and RKT. Further, commentators have argued that knowledge transfer across organisational boundaries (whether inter or intra-organisation) is complicated because of the difference in cultures (Easterby-Smith et al., 2008). By providing empirical evidence from a major MNE to support this argument, and from the novel perspective of RKT, our work contributes to broader theoretical debates about knowledge transfer and cultural distance. From the managerial perspective, our study demonstrates the importance of adequate considerations of cultural difference in encouraging and facilitating knowledge flows across the MNE. Prevailing approaches to modelling begin by testing relationships between variables for statistical significance. Reflecting the limitations of the study, we bypassed this step by using related variables from major previous studies, for which hypotheses concerning their relationships have been tested and confirmed. The methodology employed, can also be described as largely systemic since no attempt is made to offer hypotheses regarding the relative intensity of RKT and individual constructs or variables of the model. Instead, intensity of RKT is viewed as being reliant on the amalgamation of the four constructs, with each of these, in turn, acting as a full mediator of its constituent variables. Given the small sample size, no statistical inferences can be made regarding the results at this stage. Whilst the UK was once the dominant player in this industry; today most of the world’s textile and apparel manufacturing is carried out outside the UK. This fact highlights the importance to foreign subsidiary knowledge for UK based MNEs like Coats plc and emphasises the importance of RKT processes for managerial practice. In addition to its implications for managerial practice, the multifaceted model created, lends itself towards further investigation within the growing field of RKT research. Since this study adopted a nodal approach and focused purely on the subsidiary, it was only possible to measure the subsidiary’s perception regarding the intensity of knowledge outflow. An obvious next-step would be to compare the values obtained using the model against the perceptions of the corporate parent. It may also be possible to improve the precision of the new model, by exploring more robust methods through which its constituent variables can be measured. Whilst there are certain limits imposed on the research arising from the constraints in terms of generalisability from one in depth case study, it is clear, nonetheless, that our new model of RKT opens new horizons both in terms of theory and practice. This case study has addressed a key gap in the literature on RKT (Michailova and Mustaffa, in press and Rabbiosi, 2011). In particular, Michailova and Mustaffa identified a focus on knowledge inflows to subsidiaries in research carried out to date. This is at the expense of investigation of subsidiary knowledge outflows, both horizontal and vertical. This study has explored this critical gap in the literature in a novel manner through its multi-subsidiary focus across diverse geographical and economic regions and has added to knowledge transfer research as a result. Having successfully trialled the model during this study, larger scale research is now called for, in support of future development. Managerial implications A key benefit of our new model is that it allows for maps of RKT capabilities to be created. This has important implications for management practice. Not only do these maps offer managers a potentially significant tool for strategic analysis by providing an integrative perspective on factors underpinning RKT, they also allow an assessment of relative RKT capabilities across different subsidiaries. One can argue that being able to build an overarching picture of RKT across the different parts of the MNE is vital given Monteiro et al.’s (2008) findings regarding the negative performance implications of subsidiary isolation. Buckley et al. (2003) found that the global strategy of the MNE parent was influential in determining the success of RKT. The model presented enhances managers’ abilities to explicitly and methodically identify, target and review RKT within the global MNE not simply to optimise opportunities for RKT, but also to ensure consonance with global strategic imperatives. This is of great value given data on knowledge flows within MNEs which appear to indicate negative performance implications for isolated subsidiaries isolated from knowledge flows. For managers, the mapping process set out in this paper offers several practical benefits. At a strategic level, this mapping process can be utilised to highlight areas which can (or which need) to be improved in order to stimulate RKT (in terms of the four main constructs). This can allow the most efficient allocation of scarce resource within the MNE. Benchmarking can be carried out across organisational units to enhance knowledge flows in multiple directions and ensure strategic fit with MNE organisational imperatives. Operationally, the maps can establish specific directions for optimal improvements through consideration of the constituent variables underpinning the different constructs. In this way, managers can target and direct effective implementation and utilisation of resource in order to optimise returns to the business. Finally, they can be used to estimate targets regarding how much improvement can be made (based on the capability of a selected benchmark unit).