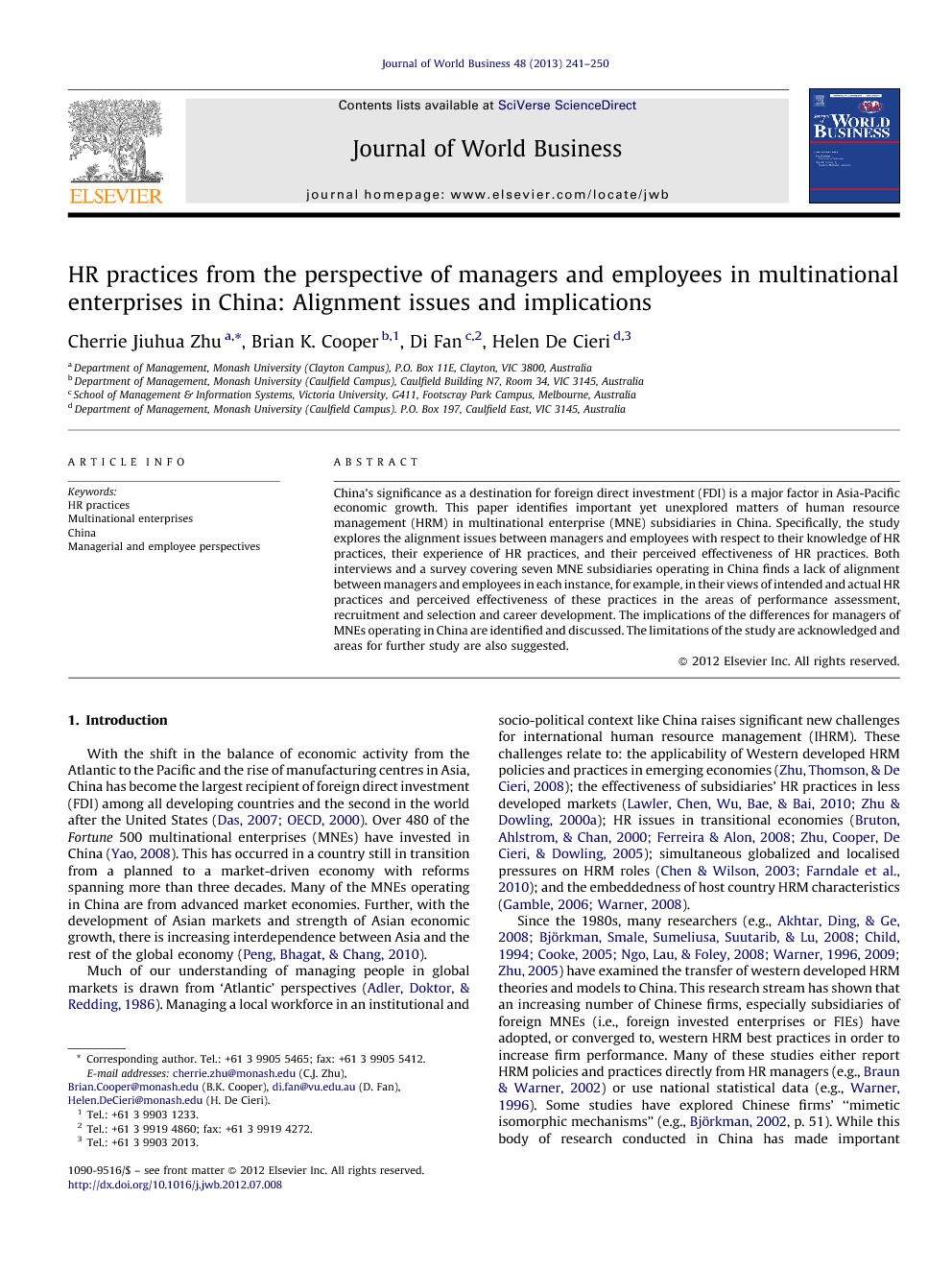 China's significance as a destination for foreign direct investment (FDI) is a major factor in Asia-Pacific economic growth. This paper identifies important yet unexplored matters of human resource management (HRM) in multinational enterprise (MNE) subsidiaries in China. Specifically, the study explores the alignment issues between managers and employees with respect to their knowledge of HR practices, their experience of HR practices, and their perceived effectiveness of HR practices. Both interviews and a survey covering seven MNE subsidiaries operating in China finds a lack of alignment between managers and employees in each instance, for example, in their views of intended and actual HR practices and perceived effectiveness of these practices in the areas of performance assessment, recruitment and selection and career development. The implications of the differences for managers of MNEs operating in China are identified and discussed. The limitations of the study are acknowledged and areas for further study are also suggested.

With the shift in the balance of economic activity from the Atlantic to the Pacific and the rise of manufacturing centres in Asia, China has become the largest recipient of foreign direct investment (FDI) among all developing countries and the second in the world after the United States (Das, 2007 and OECD, 2000). Over 480 of the Fortune 500 multinational enterprises (MNEs) have invested in China ( Yao, 2008). This has occurred in a country still in transition from a planned to a market-driven economy with reforms spanning more than three decades. Many of the MNEs operating in China are from advanced market economies. Further, with the development of Asian markets and strength of Asian economic growth, there is increasing interdependence between Asia and the rest of the global economy ( Peng, Bhagat, & Chang, 2010). Much of our understanding of managing people in global markets is drawn from ‘Atlantic’ perspectives (Adler, Doktor, & Redding, 1986). Managing a local workforce in an institutional and socio-political context like China raises significant new challenges for international human resource management (IHRM). These challenges relate to: the applicability of Western developed HRM policies and practices in emerging economies (Zhu, Thomson, & De Cieri, 2008); the effectiveness of subsidiaries’ HR practices in less developed markets (Lawler et al., 2010 and Zhu and Dowling, 2000a); HR issues in transitional economies (Bruton et al., 2000, Ferreira and Alon, 2008 and Zhu et al., 2005); simultaneous globalized and localised pressures on HRM roles (Chen and Wilson, 2003 and Farndale et al., 2010); and the embeddedness of host country HRM characteristics (Gamble, 2006 and Warner, 2008). Since the 1980s, many researchers (e.g., Akhtar et al., 2008, Björkman et al., 2008, Child, 1994, Cooke, 2005, Ngo et al., 2008, Warner, 1996, Warner, 2009 and Zhu, 2005) have examined the transfer of western developed HRM theories and models to China. This research stream has shown that an increasing number of Chinese firms, especially subsidiaries of foreign MNEs (i.e., foreign invested enterprises or FIEs) have adopted, or converged to, western HRM best practices in order to increase firm performance. Many of these studies either report HRM policies and practices directly from HR managers (e.g., Braun & Warner, 2002) or use national statistical data (e.g., Warner, 1996). Some studies have explored Chinese firms’ “mimetic isomorphic mechanisms” (e.g., Björkman, 2002, p. 51). While this body of research conducted in China has made important contributions to knowledge, it has neither investigated employee perceptions of HR practices, nor the possibility of differences between intended and actual HR practices from the perspective of managers and workers. In other research contexts, it has been noted that there is often a lack of alignment between intended and actual HR practices (Khilji and Wang, 2006 and Truss and Gratton, 1994) and also between managers and employees (typically referring to shopfloor workers) with respect to their knowledge and experience of HR practices intended or implemented (e.g., Gamble, 2006 and Nishii and Wright, 2008). These differences are likely to impact employees’ behaviours and their perception of the effectiveness of HR practices in use (Fulmer et al., 2003 and Nishii et al., 2008). As Purcell and Kinnie (2006) and Guest (2011) have maintained employee responses to HR practices are at the heart of all HRM-performance models. It is proposed that identification of any lack of alignment is a critical precondition for measurement of the influence of HR practices on the performance of both individuals and organisations. Nevertheless, there is little empirical evidence relating to the nature and extent of the lack of alignment between intention and practice and between the HRM knowledge and experience of managers and employees, especially in the context of China. There is a similar lack of evidence concerning how these differences could impact on managers’ and employees’ perceptions of the effectiveness of HR practices. To address this paucity of research and examine these aspects of HRM, Chinese subsidiaries of MNEs from advanced market economies were selected for the study. This paper has two objectives. First, to explore the differences between managers and employees in terms of their knowledge of the firm's HR practices, their experience of HR practices in operation, and their perceptions of HR practice effectiveness. This exploration will enable identification of the extent and nature of any lack of alignment. Secondly, to analyse the possible reasons for differences identified, and consider the implications and challenges for managing people in global markets in general and China in particular. Building upon previous research work, this study contributes to theory-building and practice by addressing deficiencies identified in research on the links between HRM and both individual and organisational performance. The study also responds to the calls of several researchers: (1) to study internal fit by distinguishing between managers and employees in terms of knowledge, experience and perceptions of HR practices (Lengnick-Hall, Lengnick-Hall, Andrade, & Drake, 2009), especially when “there is an urgent need for studies to capture the views” of employees in China (Cooke, 2009, p. 19); and (2) to examine the effects that the adoption of Western-style HRM practices by MNEs’ Chinese subsidiaries may have on values held by present and future employees of these firms (Björkman, 2002, Cooke, 2009 and Gamble, 2006). The paper begins by discussing the transfer of HRM policies and practices from advanced market economy MNEs to China, and identifying deficiencies in knowledge related to the HRM-performance link in organisations. A conceptual framework for analysis follows, with three research questions and explanation of the research method. The findings of the field study conducted with managers and employees in seven MNEs in China are then discussed. The paper concludes with implications of the findings for MNEs in China, especially the potential challenges in managing a Chinese workforce.

Based on both quantitative and qualitative evidence, this study has addressed the three research questions by identifying the alignment issues between managers and employees with respect to their knowledge of HR practices, their experience of HR practices, and their perceived effectiveness of HR practices. From the research findings, relevant implications have also been drawn for managers and MNEs. Nevertheless, the study has a number of limitations. First, the focus was on identifying differences, or a lack of alignment, between managers and employees with respect to their knowledge, experience and perceptions of the effectiveness of HR practices. The links between HR practices and performance were not assessed. Given researchers’ claims that the distinction between intended and actual HR practices could affect the implementation of HR practices and organisation performance (Purcell & Hutchinson, 2007), future studies could examine how these differences in perceptions might moderate/mediate the link between HR practices and performance of both individual and firms. Secondly, the data are based on a sample of employees and managers in the most developed areas in China (Shanghai and Jiangsu province). Four of the seven case firms are in a knowledge-intensive industry. Consequently, the majority of respondents were relatively highly educated (i.e., 83% of employees and 92% of managers). Thus the study's generalizability is limited. Had the study included more less educated frontline workers, larger differences might have been found. Future research could examine the external validity of these findings using more representative samples. Finally, while the present study confirms the existence of differences in awareness, implementation and perceived effectiveness between managers and employees, the issues of why and how such differences appear have not been fully explained. It would be interesting to explore HR activities beyond the four core areas considered here; HR activities such as occupational health and safety or employee participation are also worthy of investigation in the Chinese context and qualitative research would be well suited to this purpose. As Kehoe and Wright (2010, p. 2) have suggested, further research “would allow us to determine whether employees’ collective subjective experiences with HR practices are a critical mechanism through which an HR system affects outcomes of interest”. The challenges that MNEs (from either Atlantic or developed countries) face in a country (China) within the Asia-Pacific region which is dominant in terms of inward FDI, have been explored. The study has identified important areas with regard to human resource management not previously studied in these developed MNE subsidiaries in China. The findings demonstrate the diffusion of indigenous management practices on HRM policies brought in by foreign MNEs, such as the emphasis on guanxi in both recruitment/selection and promotion. This diffusion may also reflect the role of geopolitical factors such as culture and business practices in China in determining the effectiveness of HRM practices. The lack of alignment identified between managers and employees has raised questions about how to reduce the differences between managers’ and employees’ perspectives and how to obtain consistency and effectiveness in HR practices. This presents new challenges for MNEs, particularly those from advanced economies seeking to operate in transitional economies such as China.