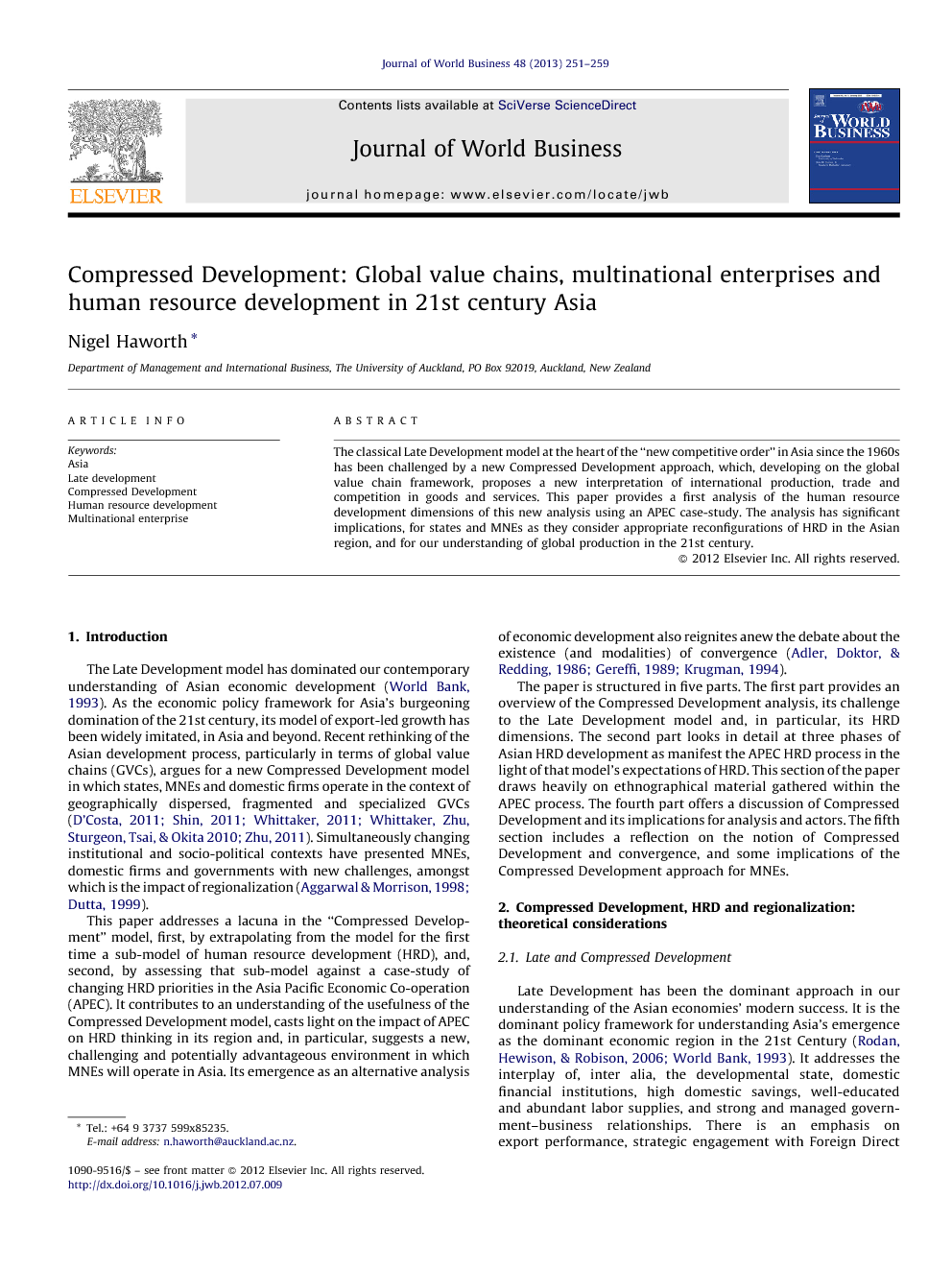 The classical Late Development model at the heart of the “new competitive order” in Asia since the 1960s has been challenged by a new Compressed Development approach, which, developing on the global value chain framework, proposes a new interpretation of international production, trade and competition in goods and services. This paper provides a first analysis of the human resource development dimensions of this new analysis using an APEC case-study. The analysis has significant implications, for states and MNEs as they consider appropriate reconfigurations of HRD in the Asian region, and for our understanding of global production in the 21st century.

The Late Development model has dominated our contemporary understanding of Asian economic development (World Bank, 1993). As the economic policy framework for Asia's burgeoning domination of the 21st century, its model of export-led growth has been widely imitated, in Asia and beyond. Recent rethinking of the Asian development process, particularly in terms of global value chains (GVCs), argues for a new Compressed Development model in which states, MNEs and domestic firms operate in the context of geographically dispersed, fragmented and specialized GVCs (D’Costa, 2011, Shin, 2011, Whittaker, 2011, Whittaker et al., 2010 and Zhu, 2011). Simultaneously changing institutional and socio-political contexts have presented MNEs, domestic firms and governments with new challenges, amongst which is the impact of regionalization (Aggarwal and Morrison, 1998 and Dutta, 1999). This paper addresses a lacuna in the “Compressed Development” model, first, by extrapolating from the model for the first time a sub-model of human resource development (HRD), and, second, by assessing that sub-model against a case-study of changing HRD priorities in the Asia Pacific Economic Co-operation (APEC). It contributes to an understanding of the usefulness of the Compressed Development model, casts light on the impact of APEC on HRD thinking in its region and, in particular, suggests a new, challenging and potentially advantageous environment in which MNEs will operate in Asia. Its emergence as an alternative analysis of economic development also reignites anew the debate about the existence (and modalities) of convergence (Adler et al., 1986, Gereffi, 1989 and Krugman, 1994). The paper is structured in five parts. The first part provides an overview of the Compressed Development analysis, its challenge to the Late Development model and, in particular, its HRD dimensions. The second part looks in detail at three phases of Asian HRD development as manifest the APEC HRD process in the light of that model's expectations of HRD. This section of the paper draws heavily on ethnographical material gathered within the APEC process. The fourth part offers a discussion of Compressed Development and its implications for analysis and actors. The fifth section includes a reflection on the notion of Compressed Development and convergence, and some implications of the Compressed Development approach for MNEs.

The implications for the MNE of the Compressed Development model are significant. In “compressed” thinking, MNEs operating in dynamic GVCs are in a powerful position. The logic of the analysis is that states will choose to specialize in some GVC-driven sectors, rather than others, or will prioritize one of more sectors over others. The idea of choice implies negotiation – between the state and MNE, or between domestic companies and the MNE, in an environment in which the state is supportive. The APEC focus on networks and partnerships around HRD reflects this explicitly. In this sense, Compressed Development provides an explanation for first-mover advantage for the MNE. The MNE has requirements that must be met (perhaps, for example, in HRD) but numerous locations may provide the required configuration of conditions. States and domestic companies are potentially the supplicants in that model. If nothing else, the Compressed Development model appears to confirm analytically the bargaining power of the MNE in GVC development, and in related HRD configuration within national HRD delivery systems.