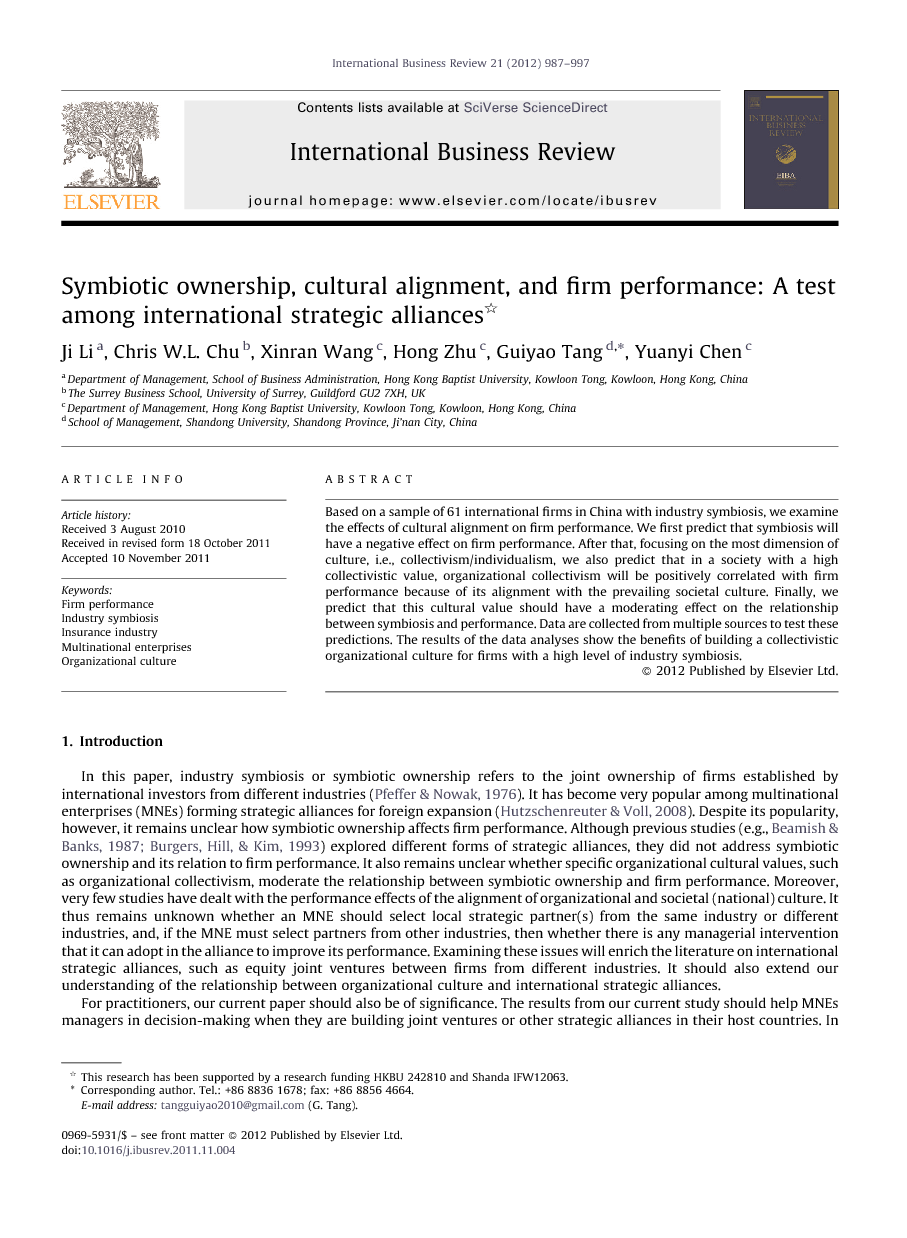 Based on a sample of 61 international firms in China with industry symbiosis, we examine the effects of cultural alignment on firm performance. We first predict that symbiosis will have a negative effect on firm performance. After that, focusing on the most dimension of culture, i.e., collectivism/individualism, we also predict that in a society with a high collectivistic value, organizational collectivism will be positively correlated with firm performance because of its alignment with the prevailing societal culture. Finally, we predict that this cultural value should have a moderating effect on the relationship between symbiosis and performance. Data are collected from multiple sources to test these predictions. The results of the data analyses show the benefits of building a collectivistic organizational culture for firms with a high level of industry symbiosis.

In this paper, industry symbiosis or symbiotic ownership refers to the joint ownership of firms established by international investors from different industries (Pfeffer & Nowak, 1976). It has become very popular among multinational enterprises (MNEs) forming strategic alliances for foreign expansion (Hutzschenreuter & Voll, 2008). Despite its popularity, however, it remains unclear how symbiotic ownership affects firm performance. Although previous studies (e.g., Beamish and Banks, 1987 and Burgers et al., 1993) explored different forms of strategic alliances, they did not address symbiotic ownership and its relation to firm performance. It also remains unclear whether specific organizational cultural values, such as organizational collectivism, moderate the relationship between symbiotic ownership and firm performance. Moreover, very few studies have dealt with the performance effects of the alignment of organizational and societal (national) culture. It thus remains unknown whether an MNE should select local strategic partner(s) from the same industry or different industries, and, if the MNE must select partners from other industries, then whether there is any managerial intervention that it can adopt in the alliance to improve its performance. Examining these issues will enrich the literature on international strategic alliances, such as equity joint ventures between firms from different industries. It should also extend our understanding of the relationship between organizational culture and international strategic alliances. For practitioners, our current paper should also be of significance. The results from our current study should help MNEs managers in decision-making when they are building joint ventures or other strategic alliances in their host countries. In other words, with better understanding of the effects of symbiotic ownership and other variables, MNEs managers should be able to make better decisions on such issues as what partners to select and what they should do to prevent potential problems. Moreover, after the joint ventures or strategic alliances were established, the findings from current study can also help them to improve the effectiveness and efficiency of the firms. Specifically, our current study is actually testing the effects of some managerial interventions, such as the building of organizational cultural value, the results from this testing should be helpful to MNEs’ managers in running their international joint ventures or other strategic alliances. In this study, we not only take into consideration the relationship between symbiotic ownership and firm performance, but also place the relationship in the context of both organizational and societal culture. We also engage in high-quality empirical research by using both data from questionnaires and panel data.1 In this way, the study makes a significant contribution to the literature on international strategic alliances.