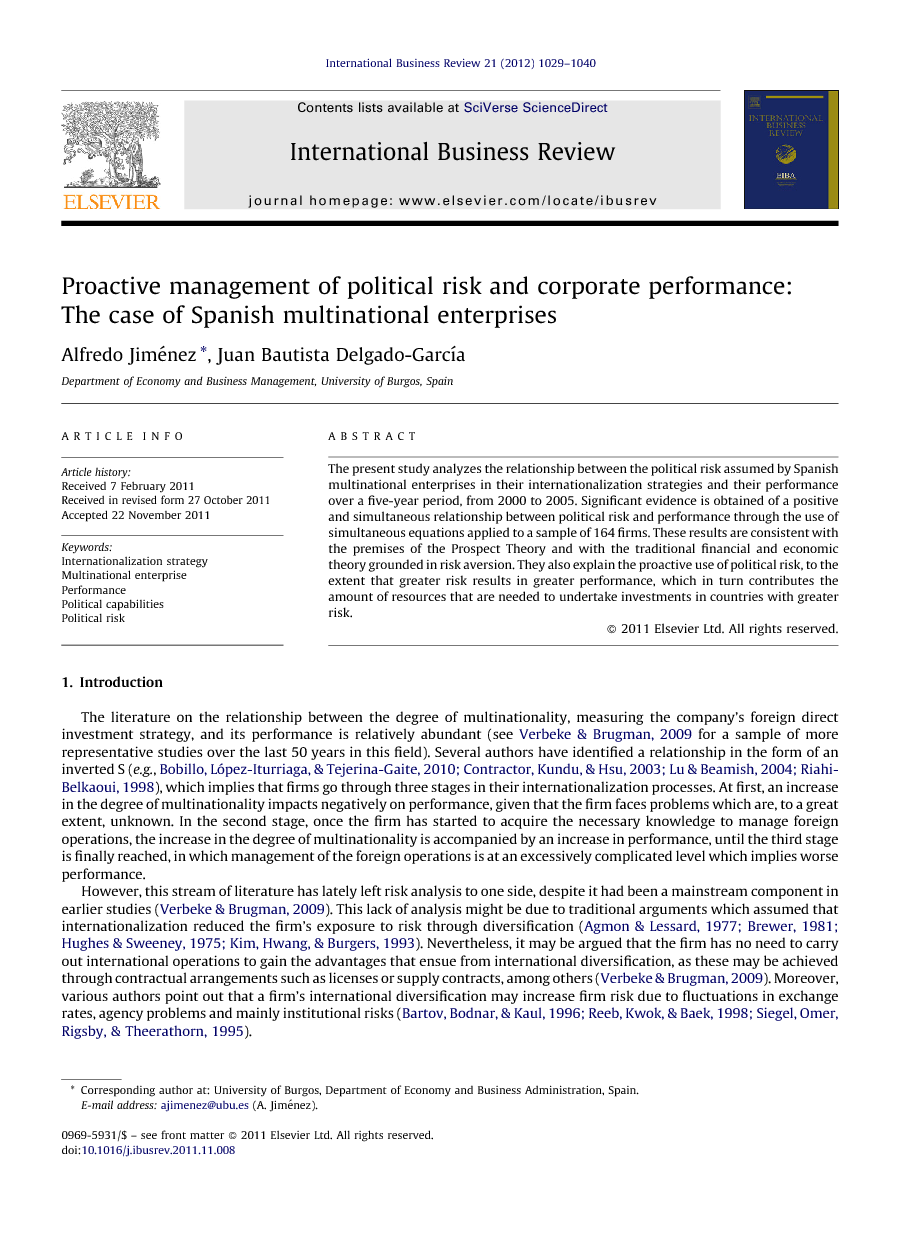 The present study analyzes the relationship between the political risk assumed by Spanish multinational enterprises in their internationalization strategies and their performance over a five-year period, from 2000 to 2005. Significant evidence is obtained of a positive and simultaneous relationship between political risk and performance through the use of simultaneous equations applied to a sample of 164 firms. These results are consistent with the premises of the Prospect Theory and with the traditional financial and economic theory grounded in risk aversion. They also explain the proactive use of political risk, to the extent that greater risk results in greater performance, which in turn contributes the amount of resources that are needed to undertake investments in countries with greater risk.

The literature on the relationship between the degree of multinationality, measuring the company's foreign direct investment strategy, and its performance is relatively abundant (see Verbeke & Brugman, 2009 for a sample of more representative studies over the last 50 years in this field). Several authors have identified a relationship in the form of an inverted S (e.g., Bobillo et al., 2010, Contractor et al., 2003, Lu and Beamish, 2004 and Riahi-Belkaoui, 1998), which implies that firms go through three stages in their internationalization processes. At first, an increase in the degree of multinationality impacts negatively on performance, given that the firm faces problems which are, to a great extent, unknown. In the second stage, once the firm has started to acquire the necessary knowledge to manage foreign operations, the increase in the degree of multinationality is accompanied by an increase in performance, until the third stage is finally reached, in which management of the foreign operations is at an excessively complicated level which implies worse performance. However, this stream of literature has lately left risk analysis to one side, despite it had been a mainstream component in earlier studies (Verbeke & Brugman, 2009). This lack of analysis might be due to traditional arguments which assumed that internationalization reduced the firm's exposure to risk through diversification (Agmon and Lessard, 1977, Brewer, 1981, Hughes and Sweeney, 1975 and Kim et al., 1993). Nevertheless, it may be argued that the firm has no need to carry out international operations to gain the advantages that ensue from international diversification, as these may be achieved through contractual arrangements such as licenses or supply contracts, among others (Verbeke & Brugman, 2009). Moreover, various authors point out that a firm's international diversification may increase firm risk due to fluctuations in exchange rates, agency problems and mainly institutional risks (Bartov et al., 1996, Reeb et al., 1998 and Siegel et al., 1995). Drawing on the New Institutional Economics framework, which analyzes public sector institutions and their interaction with the economic activity of the private sector (Davis and North, 1971, Henisz, 1998, Holburn, 2001 and North, 1989), it can be argued that institutional issues such as economic freedom, political constraints or corruption levels of the countries where a multinational enterprise (MNE) invests, condition the level of political risk that it assumes in its foreign investments. This level of political risk that MNEs want to assume in their foreign investments may be related to their levels of performance. On the one hand, investment decisions in countries with certain levels of risk may influence MNEs performance. On the other hand, the choice of countries may be conditioned by MNEs performance. Thus, an analysis that differentiates the influence of MNEs’ performance on the risk they assume in their foreign investments, and vice versa, is an interesting research issue. It is precisely the scant attention that previous research has paid to institutional risks in overseas operations and their relevance for the management of MNEs, which justifies the objective of our study. Specifically, our paper seeks to analyze the simultaneous relation between the level of political risk assumed by MNEs in their foreign direct investment location portfolio and their performance. We take the empirical case of the Spanish MNEs investments. We have chosen this particular set of MNEs because recent literature has pointed out a proactive use of political risk in the internationalization strategy of Spanish MNEs by taking advantage of their political capabilities in certain locations (García-Canal and Guillén, 2008, Jiménez, 2010, Jiménez, 2011 and Jiménez et al., 2011). From a strategic point of view, it has been recently claimed that MNEs may take advantage of their experience in less institutionally developed environments to obtain competitive advantages in other markets with similar characteristics, whereas other MNEs lacking this experience may have a disadvantage (Cuervo-Cazurra & Genc, 2008). However, it is still unexplored if this particular strategy is positively reflected in the MNE's performance. Our study can be considered a first step to investigate such an issue in a “late-investor” country, at least compared to other developed economies, where literature has found that this proactive use of political risk has been implemented. The results can be extrapolated, with caution, to MNEs from other countries that might also take advantage of political capabilities in their internationalization strategy to be able to compete with dominant global competitors in selected locations. The remainder of the paper is structured in the following way. In the second section, we review prior research on the relation between political risk and the degree of internationalization of the firm. In this section we also develop the hypotheses relating the influence of the political risk assumed by Spanish MNEs with their performance, as well as the effect of Spanish MNE performance on the level of political risk. The subject of sections three and four are the sample, variables and the results. Finally, the fifth section extracts and discusses the main conclusions of the paper and points out some limitations and future lines of research.

In this study, we have analyzed the relation between the performance of MNEs and the level of political risk that they assume, with a view to filling in the gap that exists in the literature in this field. To do so, we employed a sample of 164 large Spanish MNEs with direct foreign investments across the world. Our research confirms the need to take account of the simultaneous nature of this relationship, because corporate performance does affect the average level of risk assumed by MNEs, whereas the average level of risk also affects MNEs performance. Therefore, the use of simultaneous equations as a statistical technique instead of a least squares regression is needed. The results show that the level of political risk assumed by the MNEs in their international strategy has a positive influence on their performance and vice versa. These findings suggest that, in terms of performance, the Spanish MNEs behave in accordance with the expectations of the financial and economic theory (e.g. Brealey et al., 2005) and the Prospect Theory ( Kahneman & Tversky, 1979), as they only assume greater risk levels when the overall performance of the company is expected to increase. Sometimes this involves investing in specific places where the company may lose money, but where the company can obtain advantages transferable to other units around the world. It is precisely in these particular environments where political capabilities shine, helping those firms who possess them to overcome the potential problems while taking advantage of the opportunity to obtain resources and/or capabilities not available in other countries or even enjoy lower competition because other MNEs consider the place too risky. At the same time, the additional flow of resources, arising from greater performance, means that they can design a synergistic location portfolio including investments in locations where the level of political risk is higher. Therefore, the results show evidence that Spanish MNEs consider political risk not only as the conventional view of a threat but also as an opportunity. The international strategy of these companies, characterized in part by a proactive approach to the use of political risk, is sustained by the higher levels of performance provided by investments in riskier locations in the short and medium term. This is derived from a double reinforcing effect: the higher rates of expected performance act as an incentive for the MNE to assume higher levels of political risk. Simultaneously, the resources obtained in these locations allow the company to undertake similar future investments and implement measures to minimize the possible negative effects of political risk. In any case, and taking into account the increasing importance of corporate social responsibility, those MNEs that actively employ corruption to obtain advantageous competitive positions, should not forget that they sacrifice their social standing and run the risk of losing influence and effectiveness due to the negative impact on their status in the international community (Ghosal & Moran, 2005), which may prejudice performance in the long term. Furthermore, higher corruption rates in those countries were investments are located reduce the possibilities of economic and social development (World Bank, 2001), which can be also detrimental to the interests of MNEs. As limitations, it should be mentioned the impossibility of including the influence of the internationalization process followed by the MNE (Welch & Loustarinen, 1988), due to the lack of reliable data. This is because, despite the fact that the inclusion of the variable that measures the number of countries in which each MNE is present partially alleviates this problem, it is not possible to make a distinction between whether such growth is organic or inorganic through acquisitions (De Beule & van den Buckle, 2009). In the same way, it is not possible to distinguish between the different motivations for foreign investment: resource or efficiency seeking foreign direct investment. Also, our study is based on a single investing country. Generalizing the results from a “late-investor” country such as Spain to MNEs from other countries must be done with caution, even if they are also able to use their political capabilities successfully. As a result, one of the possible future research directions emerging from our paper is the empirical analysis of the relation between performance and political risk, including in the sample MNEs from other countries also characterized by their proactive use of political risk. Additionally, it would be interesting to widen the study to include small and medium enterprises, as well as in relation to their perspectives over time, including a larger number of years over which reliable information is available. Finally, we have focused on the simultaneous relation between the level of political risk assumed by MNEs in their international strategy and their performance at the corporate level. However, analyzing the relationship at the country and subsidiary level would be an interesting future line of research.