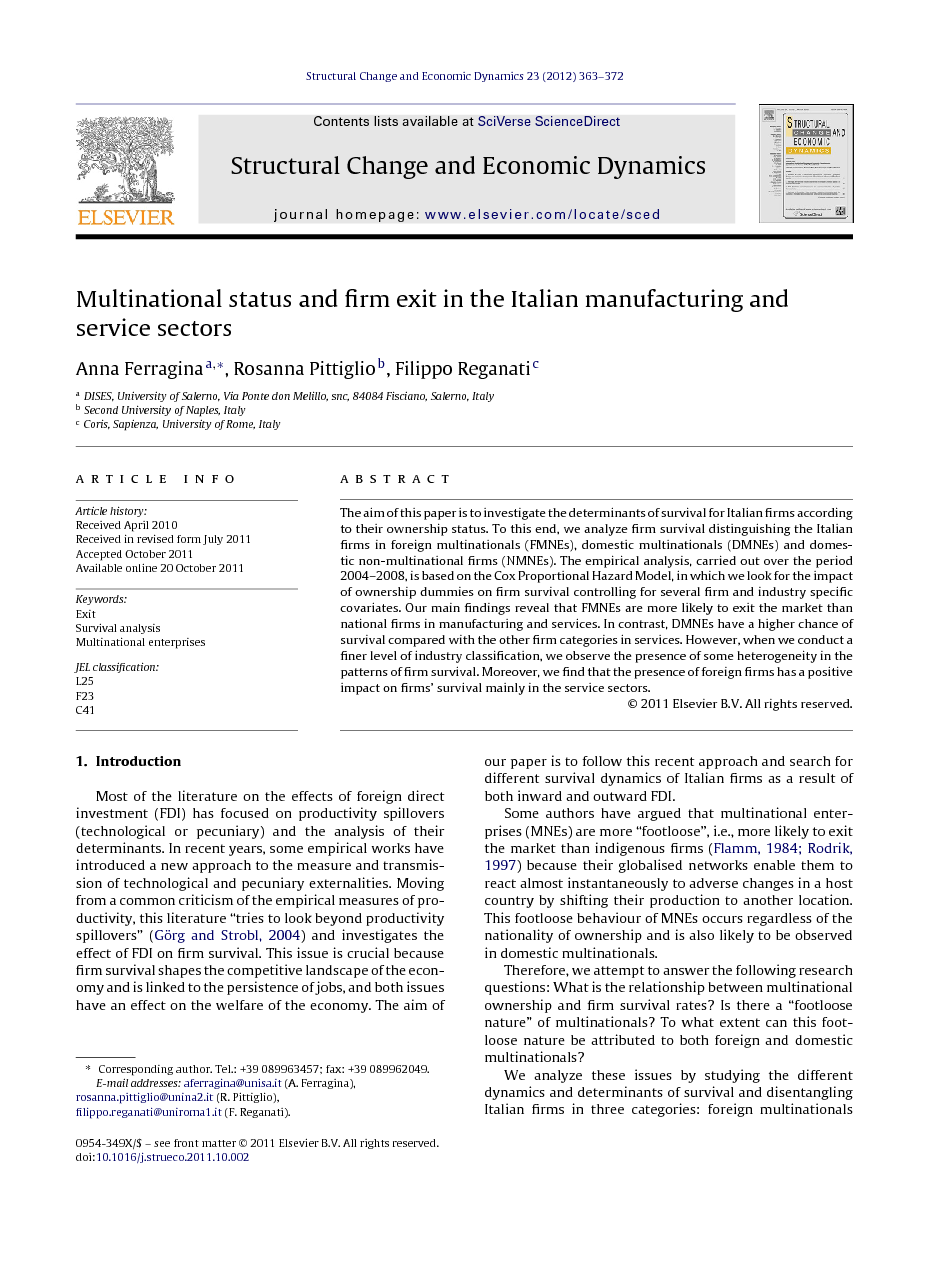 The aim of this paper is to investigate the determinants of survival for Italian firms according to their ownership status. To this end, we analyze firm survival distinguishing the Italian firms in foreign multinationals (FMNEs), domestic multinationals (DMNEs) and domestic non-multinational firms (NMNEs). The empirical analysis, carried out over the period 2004–2008, is based on the Cox Proportional Hazard Model, in which we look for the impact of ownership dummies on firm survival controlling for several firm and industry specific covariates. Our main findings reveal that FMNEs are more likely to exit the market than national firms in manufacturing and services. In contrast, DMNEs have a higher chance of survival compared with the other firm categories in services. However, when we conduct a finer level of industry classification, we observe the presence of some heterogeneity in the patterns of firm survival. Moreover, we find that the presence of foreign firms has a positive impact on firms’ survival mainly in the service sectors.

Most of the literature on the effects of foreign direct investment (FDI) has focused on productivity spillovers (technological or pecuniary) and the analysis of their determinants. In recent years, some empirical works have introduced a new approach to the measure and transmission of technological and pecuniary externalities. Moving from a common criticism of the empirical measures of productivity, this literature “tries to look beyond productivity spillovers” (Görg and Strobl, 2004) and investigates the effect of FDI on firm survival. This issue is crucial because firm survival shapes the competitive landscape of the economy and is linked to the persistence of jobs, and both issues have an effect on the welfare of the economy. The aim of our paper is to follow this recent approach and search for different survival dynamics of Italian firms as a result of both inward and outward FDI. Some authors have argued that multinational enterprises (MNEs) are more “footloose”, i.e., more likely to exit the market than indigenous firms (Flamm, 1984 and Rodrik, 1997) because their globalised networks enable them to react almost instantaneously to adverse changes in a host country by shifting their production to another location. This footloose behaviour of MNEs occurs regardless of the nationality of ownership and is also likely to be observed in domestic multinationals. Therefore, we attempt to answer the following research questions: What is the relationship between multinational ownership and firm survival rates? Is there a “footloose nature” of multinationals? To what extent can this footloose nature be attributed to both foreign and domestic multinationals? We analyze these issues by studying the different dynamics and determinants of survival and disentangling Italian firms in three categories: foreign multinationals (FMNEs), domestic multinationals (DMNEs) and purely domestic firms (NMNEs). To achieve this goal, we perform an econometric analysis based on Cox proportional hazard estimates and control for several firm- and industry-specific covariates. In our empirical analysis, we first divide our total sample into the manufacturing and service sectors. Additionally, to control for the existence of some sector-specific characteristics, we conduct a finer level of industry disaggregation. Our paper contributes to the existing literature in several ways. First, we explore a void in the literature, as the studies of the effects of MNEs on survival and the exit dynamics of firms with respect to Italy have not yet compared domestic and foreign multinational firms’ rates of survival.1 More generally, within the literature pertaining to survival and ownership, the separation of indigenous firms (plants) into multinationals and non-multinationals is indeed restricted to a few recent papers.2 Second, our empirical analysis is based on a very large dataset with a much wider coverage of the firm universe than that which has been considered in previous studies on firm survival in Italy. Third, unlike most of the empirical literature samples, our sample of firms is not restricted to manufacturing sectors but also covers the service sector. To the best of our knowledge, only one study (Van Beveren, 2007) has extended the analysis of ownership and survival beyond the manufacturing sectors. Additionally, given the large size of our database, we implement a finer industrial classification to more accurately determine how sectoral characteristics may interact with the different determinants in explaining the survival of Italian firms. The paper is organised as follows. Section 2 presents the basic theoretical and empirical premises regarding the determinants of survival and summarises the main empirical results of the literature. Section 3 describes the data and provides some descriptive statistics related to FMNEs, DMNEs and NMNEs disaggregated by manufacturing and services. Section 4 presents the model used in the paper and the results of the Cox Proportional Hazard Model. Finally, Section 5 summarises and concludes.

This paper has empirically investigated the relationship between the status of MNEs and firm survival rates in Italy. To achieve this goal, we conducted an analysis for the period from 2004 to 2008 based on a Cox proportional hazard model. This analysis has allowed us to determine whether survival rates for foreign and Italian-owned firms differ (i.e., whether foreign firms are more likely to exit than domestic firms and how domestic firms differ in their rates of exiting according to whether or not they are multinationals). The analysis for this period reveals that manufacturing and service firms owned by foreign MNEs are more likely to exit the market than national firms, but domestic MNEs in the services sector have a higher chance of survival. These results stand even when other firm and industry specific variables are controlled, thus supporting the idea that foreign MNEs are inherently footloose. This finding suggests that it is not multinationals per se but rather foreign multinationals that are likely to experience increased firm exit in Italy. Moreover, we found that a greater presence of MNEs is associated with a decrease in the probability of exit of domestic firms only in the service sector. This finding reveals the presence of spillover effects from FDI and seems consistent with the empirical literature on FDI spillovers in Italy that have indicated a weak presence of spillovers from FDI in manufacturing ( Imbriani and Reganati, 2002 and Castellani and Zanfei, 2007) while has found evidence of a significant effect in the services sector ( Pittiglio et al., 2008). The more detailed exercise that we performed at the sector level supported our main conclusions but provided important hints regarding the degree of heterogeneity of patterns at the sector level. Our main evidence that foreign-owned multinationals have a higher chance of exit, which suggests that the behaviours and strategies of MNEs differ from those of domestic firms, has not been confirmed for a few sectors (food, textiles, electrical machinery, transport equipment, tourism, finance, and other services). As for the results pertaining to the DMNEs dummy, sectors also reveal specific patterns. More specifically, once a further disaggregated analysis is performed, DMNEs appear to have higher survival rates in the clothing sector for manufacturing and in wholesale trade for services. However, we observed a higher exit risk with respect to domestic firms in wood and furniture, paper and printing and in mechanical and office machinery, while the behaviour of the remaining sectors never significantly differs from the other firm categories. Finally, mixed results are obtained for the effect of the presence of foreign MNEs in a sector. In manufacturing, we find a strongly negative effect in two sectors (food, and clothing and footwear) but a positive effect in metal products. Conversely, a larger presence of multinationals that are active in the industry is significantly associated with lower exit rates in most service sectors (tourism, transports, finance, R&D and business services, and other services) while increases the probability of exit for real estate and ICT. Overall, our study enriches our understanding of the determinants of firms’ survival in Italy and highlights the role of firm ownership status taking into account the heterogeneity of results once a more disaggregated analysis is conducted. This may provide some insights on policy issues related to ownership-specific incentive policies.