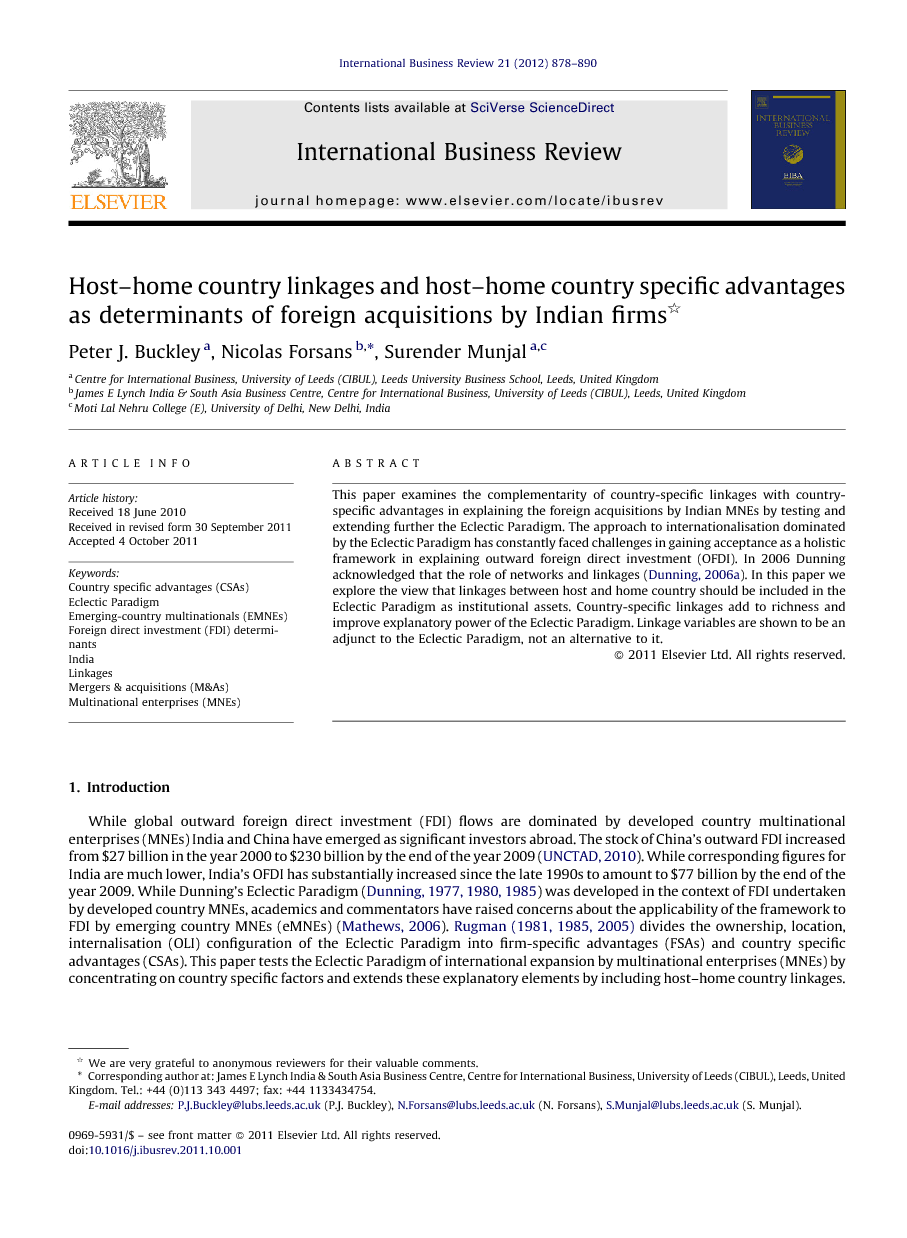 While global outward foreign direct investment (FDI) flows are dominated by developed country multinational enterprises (MNEs) India and China have emerged as significant investors abroad. The stock of China's outward FDI increased from $27 billion in the year 2000 to $230 billion by the end of the year 2009 (UNCTAD, 2010). While corresponding figures for India are much lower, India's OFDI has substantially increased since the late 1990s to amount to $77 billion by the end of the year 2009. While Dunning's Eclectic Paradigm (Dunning, 1977, Dunning, 1980 and Dunning, 1985) was developed in the context of FDI undertaken by developed country MNEs, academics and commentators have raised concerns about the applicability of the framework to FDI by emerging country MNEs (eMNEs) (Mathews, 2006). Rugman, 1981, Rugman, 1985 and Rugman, 2005 divides the ownership, location, internalisation (OLI) configuration of the Eclectic Paradigm into firm-specific advantages (FSAs) and country specific advantages (CSAs). This paper tests the Eclectic Paradigm of international expansion by multinational enterprises (MNEs) by concentrating on country specific factors and extends these explanatory elements by including host–home country linkages. In 2006 Dunning proposed to incorporate institutional assets into the Eclectic Paradigm, as these can create competitive advantages for internationalisation (Dunning, 2006b). This paper, while testing the Eclectic Paradigm incorporates a novel angle of institutions, i.e., host–home country linkages. Dunning (2006a, p. 140) acknowledged that globalisation “is opening up a whole new set of opportunities for all types and sizes of firms, (…) cross border linkages (…) can be an important raison d’etre for outbound MNE related activity”. In a globalising world, networking and linkages are becoming critical for multinational firms (MNEs). Using network and linkage strategies emerging multinationals are integrating into global value chains ( Mathews, 2006). In this respect, country-level strategic partnerships can enable firms in partner countries to benefit from mutual cooperation of their countries. There are several examples of country-level strategic linkages such as the G-20 and the Commonwealth. This paper also tests country-level linkages and investigates their power as determinant of international expansion. Thus, our paper tests the explanatory power of CSAs and goes on to examine the extra degrees of explanatory power given by linkage variables. To do this, we examine the foreign acquisition behaviour of Indian MNEs. India is a particularly good case to conduct this test for a number of reasons. First, Indian MNEs possess unique CSAs stemming from a number of home country characteristics, and at the same time India has both south–south and north–south linkages (country specific linkages or CSLs) through her membership of international fora. Second, despite the country's growing economic significance India has remained under-researched as a result of the paucity of data.1 Using a panel dataset on foreign acquisitions this study attempts to fill an empirical gap by improving our understanding of the drivers of OFDI from India, and a theoretical gap by improving the specification of commonly used models of the determinants of outward FDI. The reminder of this paper is organised as follows. In the next section we briefly review the literature on country-specific advantages, linkages between home–host countries, and host country location advantages. The following section presents the methodological framework and finally the empirical results are discussed.

This paper has modelled country-level influences on FDI using the case of foreign acquisitions by Indian firms (by number and value) over the period 2000–2007. It finds that conventional explanations – home country specific variables, such as the cost of capital, the exchange rate and language – perform well. So too do host country location factors such as market size, local intangible assets but not, in this case, natural resources as motives for FDI. We did not expect natural resources to be important given the structure of the Indian economy and its MNEs, and this proved to be the case. The openness of the host economy to trade also proved to be an important determinant of acquisitions by Indian MNEs. Linkage variables generally performed as expected with North–South linkages at country-level being a significant factor in the destination of Indian acquisitions abroad. However, South–South linkages and cultural and geographical distance between home and host countries were insignificant. The poor performance of South–South linkages is explained by the preference of Indian firms for acquisitions in rich countries where the largest markets and greatest concentration of intangible assets are to be found. Cultural and geographic distance variables do not perform with any degree of significance and do not seem to be factors in the decision of Indian MNE's to undertake foreign acquisitions. This may be due to the role of the Indian diaspora, and its location in the developed countries that are the UK and the USA. Expatriate Indians may act as culture-bridges, as argued by earlier studies of the internationalisation of Indian firms (Balasubramanyam & Forsans, 2010). The importance of services in Indian trade (and FDI) reduces the importance of physical distance. The contribution of this paper lies in the finding that host–home country linkages are important determinants of foreign investment behaviour. Linkage variables, such as trade linkages and membership of international organisations (in this case the Commonwealth and the G20) add significantly to the explanatory power of the Eclectic Paradigm. Even though the standard variables of the Eclectic Paradigm perform better than CSL variables taken separately, when combined CSL variables add power to the explanation of foreign acquisitions by Indian firms. Linkage variables need to be used with discretion however – it is North–South linkages that perform well here – concentration on South–South links would not have been successful. Linkage variables require an understanding of the nature, structure and motives of FDI in order to be useful. They are not a satisfactory alternative explanation to the Eclectic Paradigm. They are an adjunct to the paradigm.