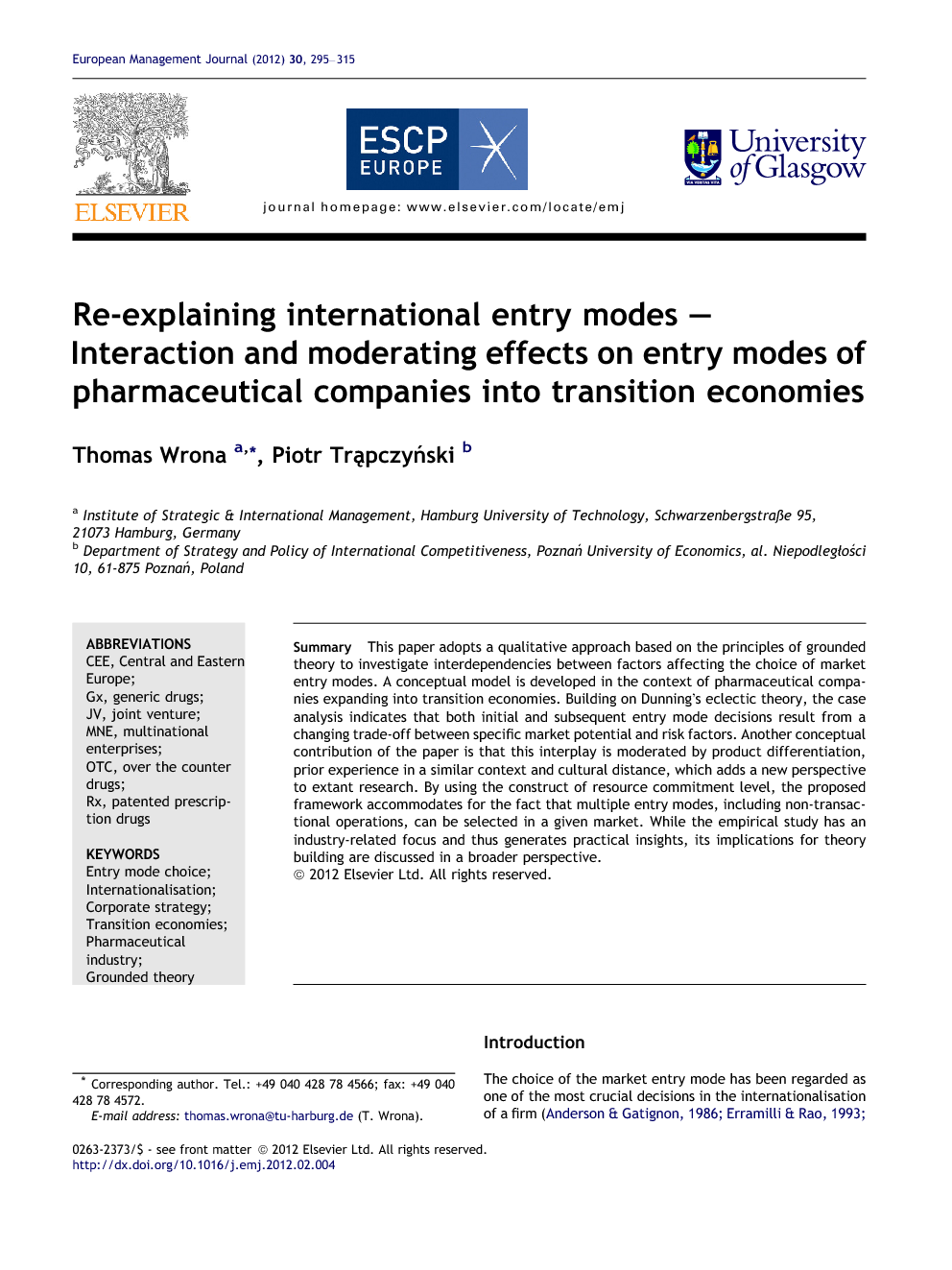 This paper adopts a qualitative approach based on the principles of grounded theory to investigate interdependencies between factors affecting the choice of market entry modes. A conceptual model is developed in the context of pharmaceutical companies expanding into transition economies. Building on Dunning’s eclectic theory, the case analysis indicates that both initial and subsequent entry mode decisions result from a changing trade-off between specific market potential and risk factors. Another conceptual contribution of the paper is that this interplay is moderated by product differentiation, prior experience in a similar context and cultural distance, which adds a new perspective to extant research. By using the construct of resource commitment level, the proposed framework accommodates for the fact that multiple entry modes, including non-transactional operations, can be selected in a given market. While the empirical study has an industry-related focus and thus generates practical insights, its implications for theory building are discussed in a broader perspective.

The choice of the market entry mode has been regarded as one of the most crucial decisions in the internationalisation of a firm (Anderson and Gatignon, 1986, Erramilli and Rao, 1993 and Hill et al., 1990), which has important influence on performance (Brouthers, 2002). After deciding to enter a foreign market, a company must choose an appropriate mode of entry, which Root (1994) defines as an institutional arrangement that enables the introduction of a company’s products, management or other resources into a foreign country. In distinguishing between different modes of entry, firms need to be aware of how many resources need to be committed in order to gain competitive advantage (Anderson and Gatignon, 1986 and Root, 1994). Companies can thereby choose between non-equity (e.g. export or contractual agreements) and equity (e.g. wholly owned subsidiary or joint venture) entry modes (Kumar & Subramaniam, 1997). In general, a vast number and heterogeneity of proposed entry mode contingencies can be identified (Madhok, 1998). However, extant research examines single theories and related explanatory variables in isolation (Hill et al., 1990), leading to partly conflicting or inconclusive results (Tihanyi, Griffith, & Russel, 2005). At the same time, evidence for interactions between determinants of entry mode choice exists (Agarwal and Ramaswami, 1992 and Erramilli et al., 1997), which requires distinguishing between their direct and indirect effects (Calof & Beamish, 1995). Moreover, extant research has focused on the analysis of the first market entry, disregarding subsequent choices and their determinants (Calof, 1993). Accordingly, the main objectives of this paper are to establish what interdependencies between environmental and company-specific variables determine the entry mode choice in the context of first entry and subsequent commitment changes. In order to examine these complex relationships, we chose a qualitative research design for our study, in which the entries of pharmaceutical companies into transition economies are examined. The adopted focus was not only to allow exploring the dynamic interplay of entry mode determinants, but also specifying in greater detail the explanations of expansion decisions in these markets and thus providing practical insights. The following section starts with a short literature review, derives the research objectives for the present study, explains the chosen focus and presents the adopted theoretical background. Section “Research method” describes the integration of theory into an own qualitative design. A presentation of the research method used is then followed by a detailed account on emergent conceptual model in the following Section. In Section “Discussion of results and theoretical propositions”, we build on the conceptual model to derive a set of theoretical propositions and discuss these in the context of international business literature. The last Section concludes with some theoretical and practical contributions as well as limitations of the study.