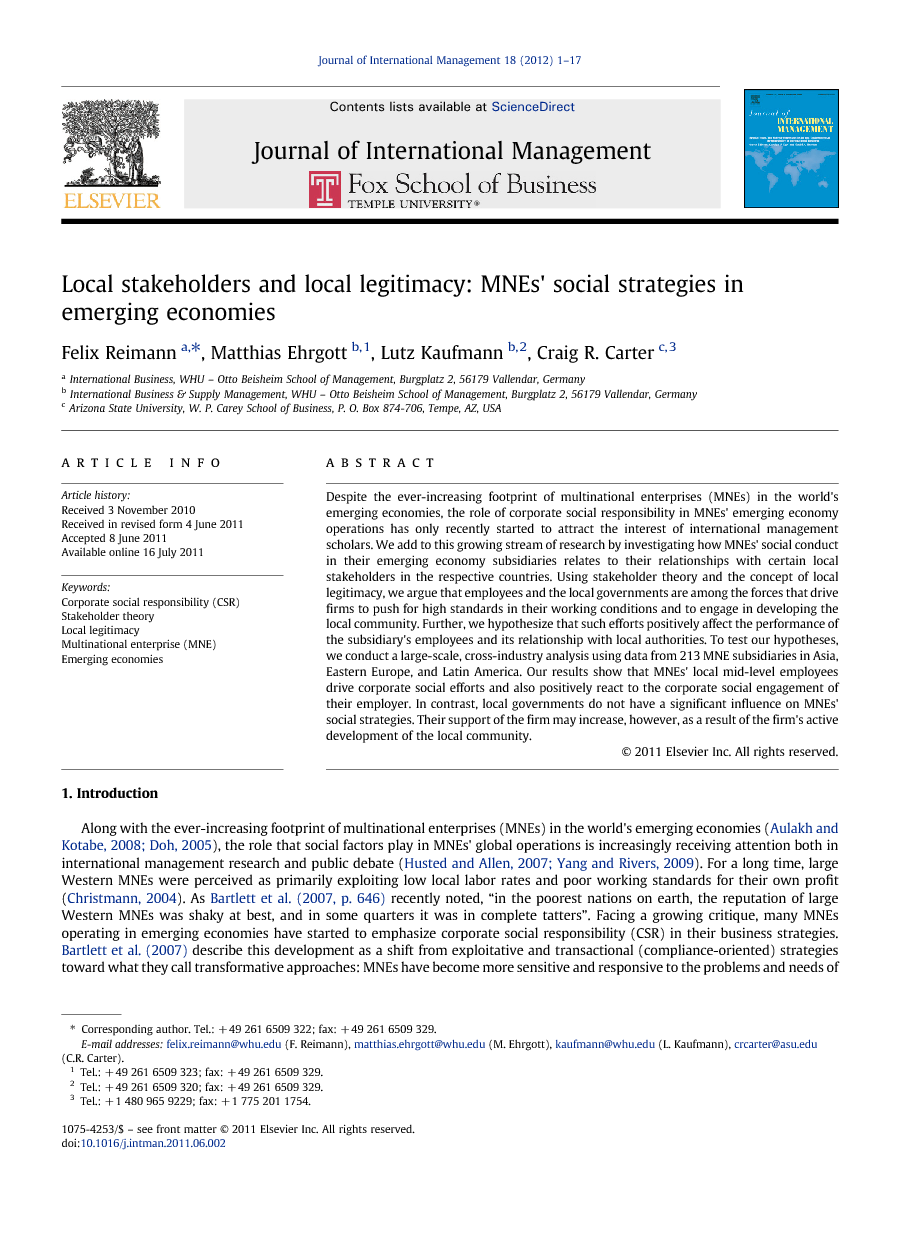 Despite the ever-increasing footprint of multinational enterprises (MNEs) in the world's emerging economies, the role of corporate social responsibility in MNEs' emerging economy operations has only recently started to attract the interest of international management scholars. We add to this growing stream of research by investigating how MNEs' social conduct in their emerging economy subsidiaries relates to their relationships with certain local stakeholders in the respective countries. Using stakeholder theory and the concept of local legitimacy, we argue that employees and the local governments are among the forces that drive firms to push for high standards in their working conditions and to engage in developing the local community. Further, we hypothesize that such efforts positively affect the performance of the subsidiary's employees and its relationship with local authorities. To test our hypotheses, we conduct a large-scale, cross-industry analysis using data from 213 MNE subsidiaries in Asia, Eastern Europe, and Latin America. Our results show that MNEs' local mid-level employees drive corporate social efforts and also positively react to the corporate social engagement of their employer. In contrast, local governments do not have a significant influence on MNEs' social strategies. Their support of the firm may increase, however, as a result of the firm's active development of the local community.

Along with the ever-increasing footprint of multinational enterprises (MNEs) in the world's emerging economies (Aulakh and Kotabe, 2008 and Doh, 2005), the role that social factors play in MNEs' global operations is increasingly receiving attention both in international management research and public debate (Husted and Allen, 2007 and Yang and Rivers, 2009). For a long time, large Western MNEs were perceived as primarily exploiting low local labor rates and poor working standards for their own profit (Christmann, 2004). As Bartlett et al. (2007, p. 646) recently noted, “in the poorest nations on earth, the reputation of large Western MNEs was shaky at best, and in some quarters it was in complete tatters”. Facing a growing critique, many MNEs operating in emerging economies have started to emphasize corporate social responsibility (CSR) in their business strategies. Bartlett et al. (2007) describe this development as a shift from exploitative and transactional (compliance-oriented) strategies toward what they call transformative approaches: MNEs have become more sensitive and responsive to the problems and needs of the local business environments and now take the initiative to lead broad-scale CSR efforts to bring about a positive change in the local workplaces and communities in the countries in which they operate. Despite this development, large-scale empirical evidence on the role that CSR plays for managing MNEs' local stakeholders in emerging economies remains scarce. Existing research has more often focused on the role of global corporate standards, shareholders, and customer demands as drivers of regional CSR practices (Christmann and Taylor, 2006, Park, 2009 and Zhu et al., 2005). Although such firm self-regulation and pressures certainly are a major determinant of CSR in emerging economies, we argue that both local middle managers and local governments can also influence MNEs' social efforts and that such efforts can help to effectively manage these stakeholder groups. We chose to focus on these relationships and study them quantitatively because, although the respective concepts and theory are rather advanced for mature market environments (Carter, 2005 and Carter and Jennings, 2004), supporting evidence is still scarce for emerging economy contexts. Specifically, we address two research questions: First, do local employees and authorities influence MNEs' CSR in emerging economy subsidiaries? Second, do such social efforts improve the performance of the subsidiary's employees and its relationship with local authorities? Why have local middle managers and local governments been largely overlooked in the prior literature, and why do we expect them to have become important in the CSR context? Local employers in emerging economies traditionally show a strong seniority orientation in their processes (Gamble, 2003 and Hartmann et al., 2010), so that mid-level employees are less likely to influence CSR decisions. However, in MNEs (many of which are increasingly moving toward a transformative stance, as previously described), this hierarchical stance might be less pronounced as they exceed the local employment practices and standards to establish a more employee-centric culture (Bartlett et al., 2007, Björkman et al., 2008 and Hartmann et al., 2010). Concerning governmental influence on CSR, emerging economies have long suffered from weak regulatory standards and ineffective enforcement mechanisms (Christmann and Taylor, 2001). Recently, however, government interest in CSR issues has increased, and the prospect of rising regulation adds to the relevance of further research in the area (Park, 2009). With this focus, we also turn to the literature on the concept of local legitimacy, which emphasizes that MNEs increasingly need to consider local values and the social consequences of their activities (Gifford and Kestler, 2008). Such consideration is required for them to gain legitimacy for their business activities — expressing the notion that, among local stakeholders, the presence of the firm is desirable and deserves acceptance and support. We investigate our research questions via a large-scale empirical study, using a sample of 213 subsidiaries of German corporations in Brazil, China, the Czech Republic, Hungary, and India. (See Section 5 for details on our country selection.) Although no consistently applied term for this set of countries is established in the literature, we follow the terminology of Dow Jones and the Forbes-accredited Euromoney Institutional Investor Company, both using the term “emerging economy” to denote the countries in our sample (Dow Jones Indexes, 2010 and Ehrgott et al., 2011). The remainder of the paper is divided into eight sections discussing the core concepts, the research framework and hypotheses, the study's methodology, empirical results, managerial implications, limitations, and directions for future research in the field.