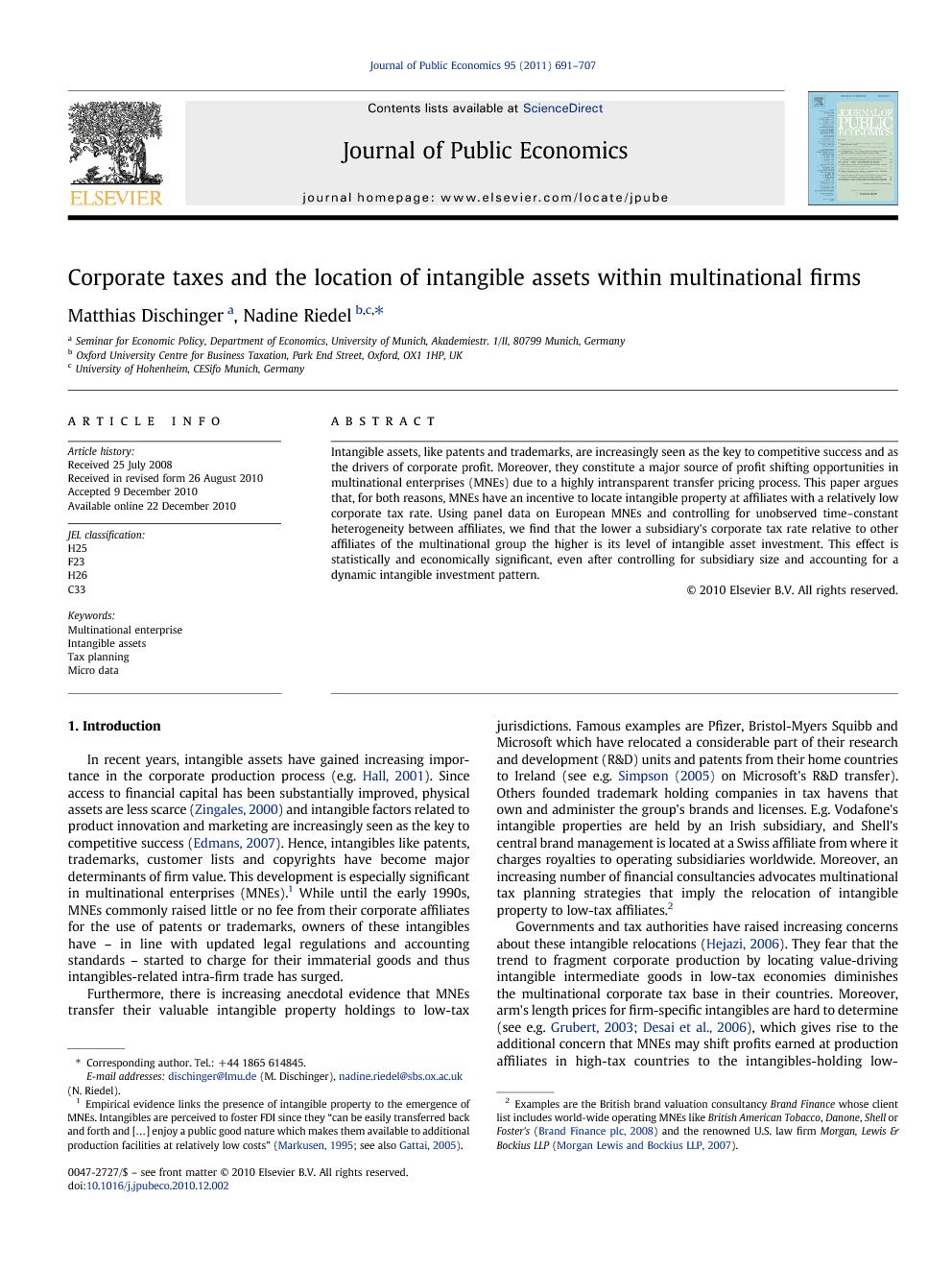 Intangible assets, like patents and trademarks, are increasingly seen as the key to competitive success and as the drivers of corporate profit. Moreover, they constitute a major source of profit shifting opportunities in multinational enterprises (MNEs) due to a highly intransparent transfer pricing process. This paper argues that, for both reasons, MNEs have an incentive to locate intangible property at affiliates with a relatively low corporate tax rate. Using panel data on European MNEs and controlling for unobserved time–constant heterogeneity between affiliates, we find that the lower a subsidiary's corporate tax rate relative to other affiliates of the multinational group the higher is its level of intangible asset investment. This effect is statistically and economically significant, even after controlling for subsidiary size and accounting for a dynamic intangible investment pattern.

The last years have witnessed a rising importance of intangible assets (patents, copyrights, brand names, etc.) in the corporate production process of MNEs (see Fig. 1 in Section 3). Anecdotal evidence moreover suggests that these intangibles are often located at low-tax affiliates. For example, Nestle, Vodafone and British American Tobacco have created brand management units in countries with a relatively low corporate tax rate that charge royalties to operating subsidiaries worldwide. Our paper argues that this pattern is essentially driven by two motivations: firstly, by the incentive to save taxes on highly profitable intangible assets and secondly, by the incentive to optimize profit shifting strategies within the group and to transfer income from high-tax production affiliates by distorting the price of intangible input goods. To the best of our knowledge, our paper provides the first systematic empirical evidence that the location of intangible assets within MNEs is indeed distorted towards low-tax affiliates. Based on a rich dataset of European MNEs during the years 1995 to 2005, we show that the lower a subsidiary's corporate tax rate relative to all other affiliates of the multinational group, the higher is its level of intangible asset holdings. This result prevails in various model specifications and robustness checks. Thus, the evidence suggests that MNEs exploit the enhanced importance of intellectual property in the production process by distorting its location within the corporate group to minimize their overall tax liabilities. Quantitatively, we find a semi-elasticity of around − 1.7, i.e. a decrease in the average tax difference to all other group affiliates by 1 percentage point raises a subsidiary's stock of intangibles by around 1.7% on average. These behavioral adjustments may have important consequences for international corporate tax competition. First, the relocation of intangible assets to tax havens facilitates income shifting and enlarges the streams of multinational profit transferred to countries with a low tax rate. This increases the governmental incentive to lower its corporate tax rate and aggravates the race-to-the-bottom in corporate taxes. Second, the creation and administration of intangible assets is (at least to some extent) related to real corporate activity. To relocate patents and trademark rights to low-tax countries, MNEs may have to transfer part of their R&D departments and their administration and marketing units with them. Obviously, these multinational service units comprise high-skilled workers who represent part of the decisive corporate human capital (see e.g. Bresnahan et al., 2002). Thus, countries which attract intangible investment by lowering their corporate tax rate do not only gain higher pre-tax profits but may also win additional jobs and knowledge capital that may spill over and raise the productivity of local firms. This additionally increases the gains from corporate tax rate reductions and may enforce tax competition behavior. In line with this prediction, several European countries have recently introduced special low rates on income from intangible assets, like patents and licenses (e.g. Belgium, Luxembourg and the Netherlands). Moreover, the current regulations on intangibles relocation within MNEs are rather lax in many OECD countries. Practitioners claim that R&D activities and the resulting patents can be geographically split between affiliates rather easily (see e.g. Karkinsky and Riedel, 2009). Additionally, if an MNE moves a business activity from a high-tax country to a tax haven, it usually has to calculate transfer prices for all tangible assets transferred, while intangible goods like e.g. production plans and knowledge capital are not accounted for. Many governments have identified these hidden intangible asset relocations from their countries as one major source of corporate tax revenue losses. For example, Germany has recently come forward with a unilateral attempt to restrict the relocation of business activities (comprising e.g. business assets and the connected benefits, opportunities and risks) to a foreign affiliate. Since January 2008, the transfer price between the related parties must be based on the value of the transfer package as a whole, which includes the intangible value of the business function. Other countries are expected to follow the German advance with the introduction of similar regulations. While such measures may be expected to dampen the destructive competition for mobile profits sketched above by lowering the international mobility of intangible property, their overall welfare effects are complex and ambiguous. Precisely, allowing multinationals to shift profits to low-tax countries through intangible relocations (and other shifting strategies) also reduces the tax burden on mobile tangible capital and may hence foster multinational real investment in high-tax countries (see e.g. Hong and Smart (2010) and (Büttner et al. (2006)). Put differently, countries which allow MNEs to relocate profits from their borders may be attractive locations for R&D units, production facilities and other real investments despite a high statutory corporate tax burden. Understanding and quantifying these welfare consequences of profit shifting behavior is an important area for future research.