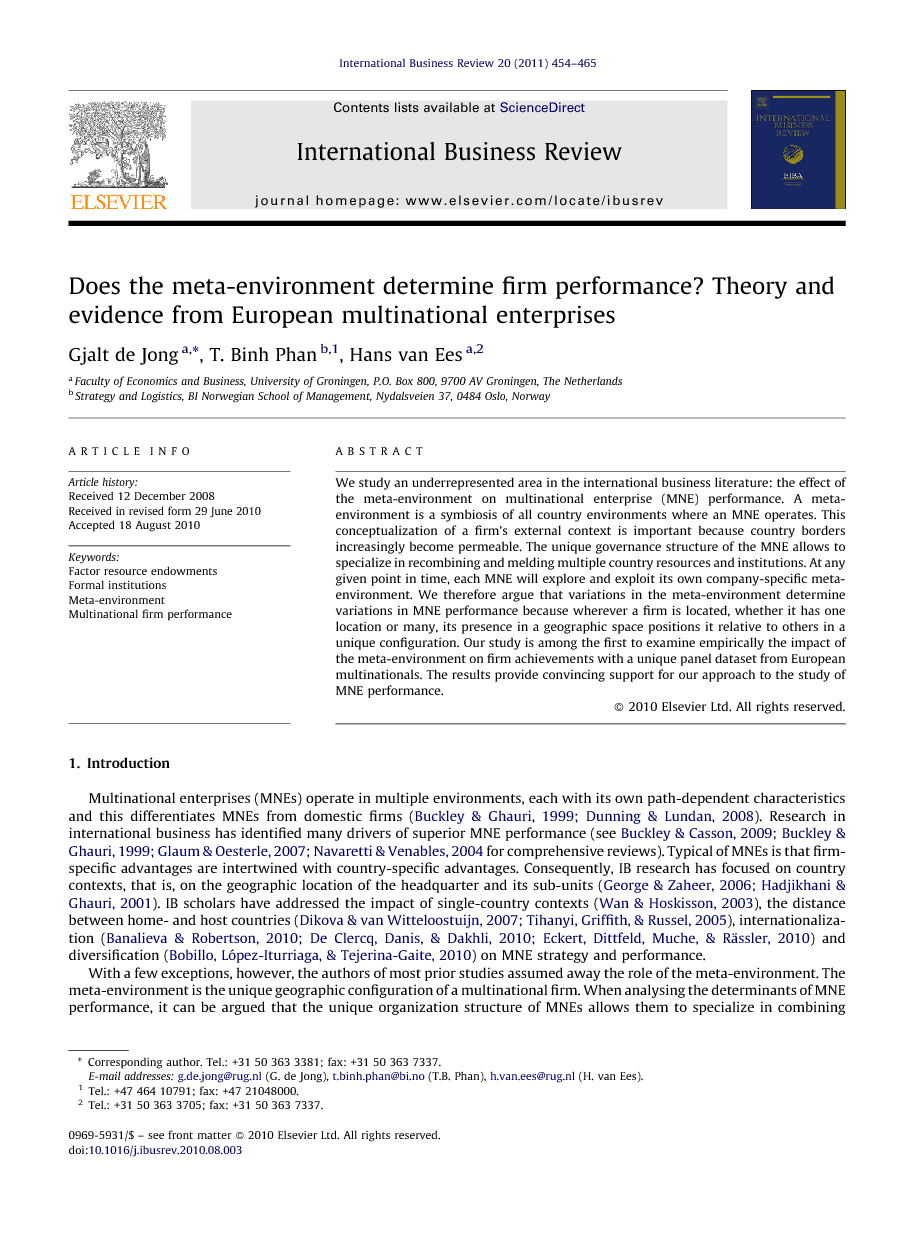 We study an underrepresented area in the international business literature: the effect of the meta-environment on multinational enterprise (MNE) performance. A meta-environment is a symbiosis of all country environments where an MNE operates. This conceptualization of a firm's external context is important because country borders increasingly become permeable. The unique governance structure of the MNE allows to specialize in recombining and melding multiple country resources and institutions. At any given point in time, each MNE will explore and exploit its own company-specific meta-environment. We therefore argue that variations in the meta-environment determine variations in MNE performance because wherever a firm is located, whether it has one location or many, its presence in a geographic space positions it relative to others in a unique configuration. Our study is among the first to examine empirically the impact of the meta-environment on firm achievements with a unique panel dataset from European multinationals. The results provide convincing support for our approach to the study of MNE performance.

Multinational enterprises (MNEs) operate in multiple environments, each with its own path-dependent characteristics and this differentiates MNEs from domestic firms (Buckley and Ghauri, 1999 and Dunning and Lundan, 2008). Research in international business has identified many drivers of superior MNE performance (see Buckley and Casson, 2009, Buckley and Ghauri, 1999, Glaum and Oesterle, 2007 and Navaretti and Venables, 2004 for comprehensive reviews). Typical of MNEs is that firm-specific advantages are intertwined with country-specific advantages. Consequently, IB research has focused on country contexts, that is, on the geographic location of the headquarter and its sub-units (George and Zaheer, 2006 and Hadjikhani and Ghauri, 2001). IB scholars have addressed the impact of single-country contexts (Wan & Hoskisson, 2003), the distance between home- and host countries (Dikova and van Witteloostuijn, 2007 and Tihanyi et al., 2005), internationalization (Banalieva and Robertson, 2010, De Clercq et al., 2010 and Eckert et al., 2010) and diversification (Bobillo, López-Iturriaga, & Tejerina-Gaite, 2010) on MNE strategy and performance. With a few exceptions, however, the authors of most prior studies assumed away the role of the meta-environment. The meta-environment is the unique geographic configuration of a multinational firm. When analysing the determinants of MNE performance, it can be argued that the unique organization structure of MNEs allows them to specialize in combining resources and institutions from multiple nation states (Almeida and Kogut, 1999, Anderson and Tushman, 2001, Bartlett and Ghoshal, 1989 and Giroud and Scott-Kennel, 2009). MNEs are able to achieve above normal returns on national resources and to seek less expensive inputs and less price sensitive markets (Wan & Hoskisson, 2003). For example, when home country-level resource abundance is low, MNEs may create competitive advantages by leveraging resources from host countries that are more resource abundant. Hence, it is the MNE-specific symbiosis between country-specific advantages that fosters MNE performance (cf. George & Zaheer, 2006).3 Yet we lack systematic research that examines whether, and if so: how, variations in such meta-environments explain variations in the performance of MNEs. The study of the meta-environment is our first contribution to the recent contextual IB research that suggests to better account for the multi-faceted nature of country environments in which MNEs operate (Buckley, 2002 and Peng, 2004). The second contribution of this paper is that it provides a stepping stone for investigating in detail core aspects of the meta-environment. Although environments can be conceptualized in many different ways, advanced production factors and formal institutions are regarded as most important (Castrogiovanni, 1991 and Wan and Hoskisson, 2003) since they determine the opportunity set that firms seek to capture (North, 1990 and North, 2005). Regarding advanced production factors, alternative collections of countries will vary in their overall resource endowments (Dunning & Lundan, 2008). MNEs create value by converting input from their meta-environment into higher value output. We argue that a meta-environment with more advanced resources – in particular technological capabilities and the quality of the infrastructure – will foster MNE performance (cf. Koka, Madhavan, & Prescott, 2006). Regarding the institutional environment, the meta-environment of an MNE is constructed by different sets of formal national rules (North, 1990). Whereas national firms operate in one particular legal environment, MNEs are able to exploit alternative sets of formal rules. We argue that this meta-institutional environment shapes governance structures and behaviours and hence, the competitive advantages of MNEs (cf. Dunning and Lundan, 2008 and Meyer and Peng, 2005). To test the effects of our finely variegated conceptualization of the meta-environment, it is important to use a multi-level dataset with sufficient variation. This is our third contribution to the IB research. We test our propositions on a panel dataset that combines headquarter information of the largest European MNEs with a refined set of meta-national measures. Our variation in context measures is larger than found in previous munificence studies which typically apply single measures for either a home or a host country context (Dess and Beard, 1984, Goll and Rasheed, 2005 and Rasheed and Prescott, 1992). We contribute to this literature by presenting six different measures that account for the variety in the meta-environment with respect to advanced resources and formal institutions. The remainder of this paper is organized as follows: Section 2 develops theory and hypotheses. Section 3 details the data, method, and variables. Section 4 reports the main empirical findings, and Section 5 provides the conclusions.