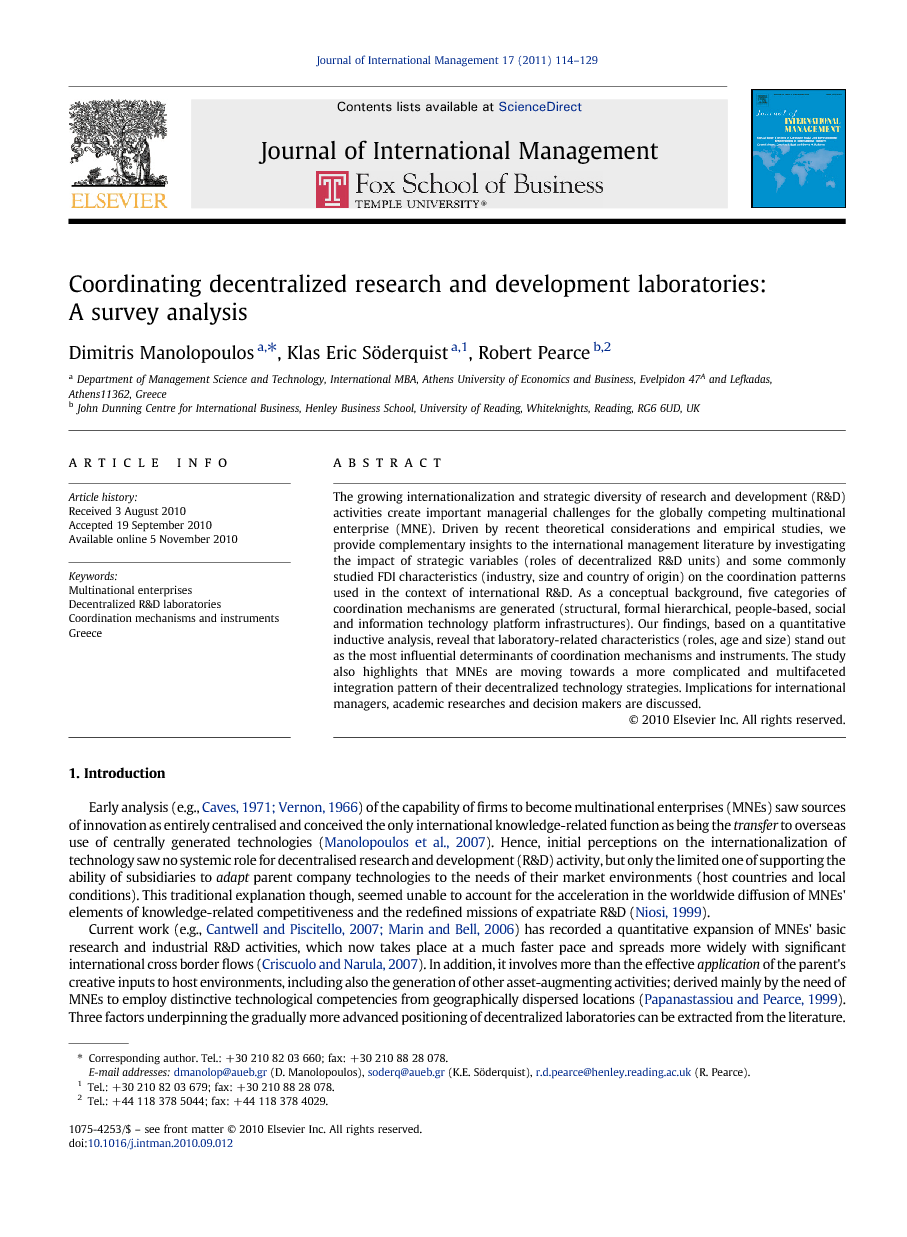 The growing internationalization and strategic diversity of research and development (R&D) activities create important managerial challenges for the globally competing multinational enterprise (MNE). Driven by recent theoretical considerations and empirical studies, we provide complementary insights to the international management literature by investigating the impact of strategic variables (roles of decentralized R&D units) and some commonly studied FDI characteristics (industry, size and country of origin) on the coordination patterns used in the context of international R&D. As a conceptual background, five categories of coordination mechanisms are generated (structural, formal hierarchical, people-based, social and information technology platform infrastructures). Our findings, based on a quantitative inductive analysis, reveal that laboratory-related characteristics (roles, age and size) stand out as the most influential determinants of coordination mechanisms and instruments. The study also highlights that MNEs are moving towards a more complicated and multifaceted integration pattern of their decentralized technology strategies. Implications for international managers, academic researches and decision makers are discussed.

Globalization of R&D is a major topic within the business community, as well as for researchers and decision-makers (Gerybadze and Reger, 1999). The broad objective of our study was to investigate what are the suitable mechanisms employed for the coordination of international R&D in MNEs, and what are the relations between these coordination mechanisms and the strategic role of decentralized R&D labs. Grounded on recent developments in international management theory, we developed and analyzed a comprehensive framework with the aim to extend existing knowledge related to MNEs' coordination modes at the level of decentralized R&D activity. In a nutshell, our study provides evidence suggesting that the use of specific coordination instruments is mainly explained by the distinctive roles of expatriate R&D and – to some extent – of functional-level characteristics, whilst factors characterizing the environment of the subsidiary or the country of HQs origin did not have such “predictive quality”. This gives ground to attempts stretching the importance of decentralized labs' strategic mission as an influential force in determining coordination modes (e.g., Nobel and Birkinshaw, 1998 and Asakawa, 2001). We emphasize that while formal hierarchical authority and structural mechanisms comprise efficient solutions for adaptation work, original product development tasks seem more difficult to be managed, since the coordination of LILs requires high levels of intra-firm arrangements and low levels of standardized procedures. No clear integration pattern for the regeneration and reinforcement of the group's core of scientific knowledge through pre-competitive research (IIL role) has emerged from our study. In line with common suggestions, our work reveals that the use of coordination instruments depends also on units' size and years of operation.