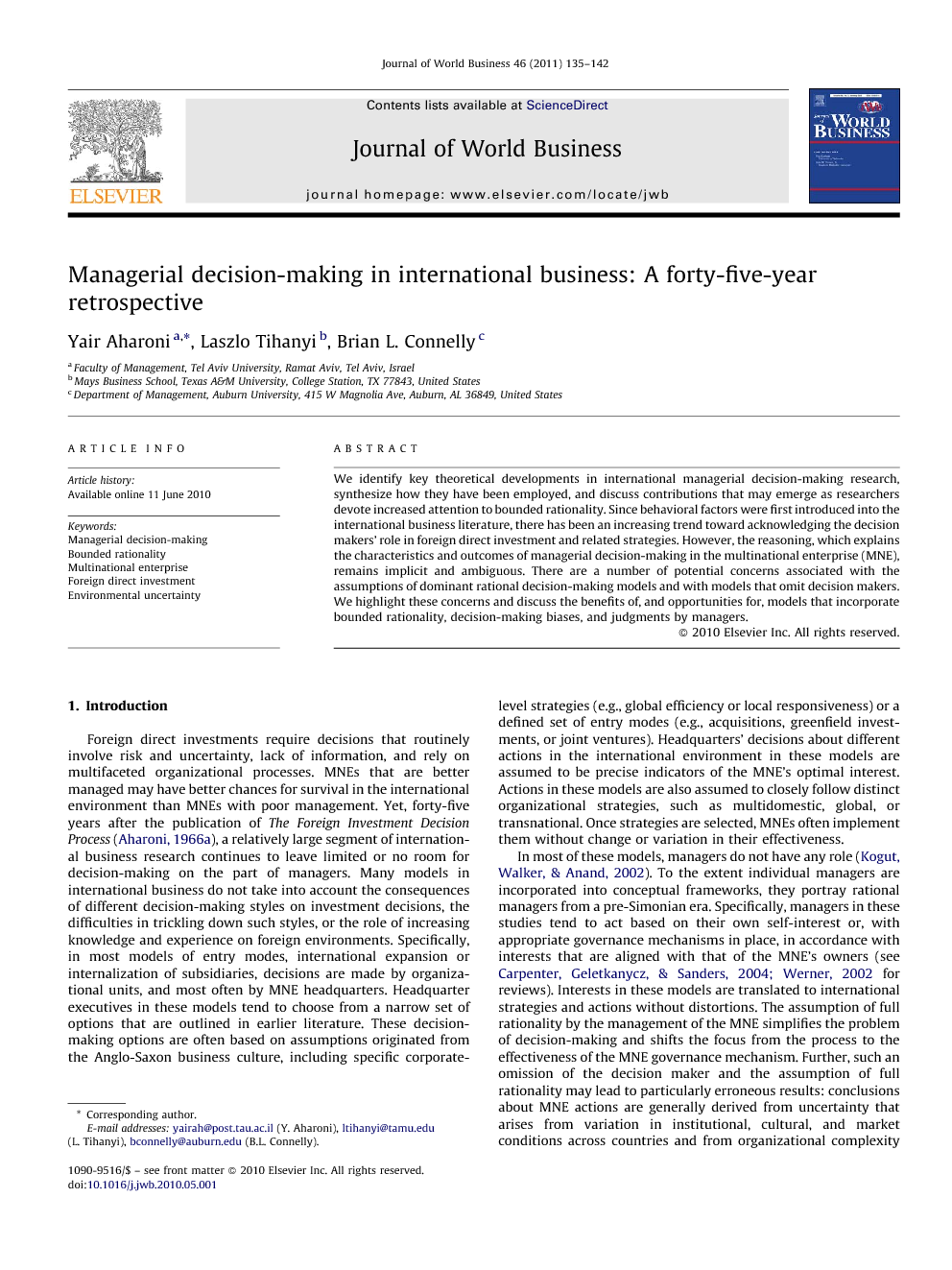 We identify key theoretical developments in international managerial decision-making research, synthesize how they have been employed, and discuss contributions that may emerge as researchers devote increased attention to bounded rationality. Since behavioral factors were first introduced into the international business literature, there has been an increasing trend toward acknowledging the decision makers’ role in foreign direct investment and related strategies. However, the reasoning, which explains the characteristics and outcomes of managerial decision-making in the multinational enterprise (MNE), remains implicit and ambiguous. There are a number of potential concerns associated with the assumptions of dominant rational decision-making models and with models that omit decision makers. We highlight these concerns and discuss the benefits of, and opportunities for, models that incorporate bounded rationality, decision-making biases, and judgments by managers.

Foreign direct investments require decisions that routinely involve risk and uncertainty, lack of information, and rely on multifaceted organizational processes. MNEs that are better managed may have better chances for survival in the international environment than MNEs with poor management. Yet, forty-five years after the publication of The Foreign Investment Decision Process ( Aharoni, 1966a), a relatively large segment of international business research continues to leave limited or no room for decision-making on the part of managers. Many models in international business do not take into account the consequences of different decision-making styles on investment decisions, the difficulties in trickling down such styles, or the role of increasing knowledge and experience on foreign environments. Specifically, in most models of entry modes, international expansion or internalization of subsidiaries, decisions are made by organizational units, and most often by MNE headquarters. Headquarter executives in these models tend to choose from a narrow set of options that are outlined in earlier literature. These decision-making options are often based on assumptions originated from the Anglo-Saxon business culture, including specific corporate-level strategies (e.g., global efficiency or local responsiveness) or a defined set of entry modes (e.g., acquisitions, greenfield investments, or joint ventures). Headquarters’ decisions about different actions in the international environment in these models are assumed to be precise indicators of the MNE's optimal interest. Actions in these models are also assumed to closely follow distinct organizational strategies, such as multidomestic, global, or transnational. Once strategies are selected, MNEs often implement them without change or variation in their effectiveness. In most of these models, managers do not have any role (Kogut, Walker, & Anand, 2002). To the extent individual managers are incorporated into conceptual frameworks, they portray rational managers from a pre-Simonian era. Specifically, managers in these studies tend to act based on their own self-interest or, with appropriate governance mechanisms in place, in accordance with interests that are aligned with that of the MNE's owners (see Carpenter et al., 2004 and Werner, 2002 for reviews). Interests in these models are translated to international strategies and actions without distortions. The assumption of full rationality by the management of the MNE simplifies the problem of decision-making and shifts the focus from the process to the effectiveness of the MNE governance mechanism. Further, such an omission of the decision maker and the assumption of full rationality may lead to particularly erroneous results: conclusions about MNE actions are generally derived from uncertainty that arises from variation in institutional, cultural, and market conditions across countries and from organizational complexity resulting from international expansion. Whereas changes in communication and transportation may offset some of these trends, managerial decision-making continues to be extremely important to MNEs and their stakeholders. In this article, we review prior international business research regarding the role of managerial decision-making, identify problems associated with the assumption of rationality in decision-making, discuss research that considers behavioral factors for MNE actions, and summarize the seven articles included in this issue. We use our review to outline recommendations for the development of different theoretical perspectives within the field of international business. Furthermore, we attempt to redirect future research toward studying the role of managerial perceptions and the decision-making process in MNE actions.