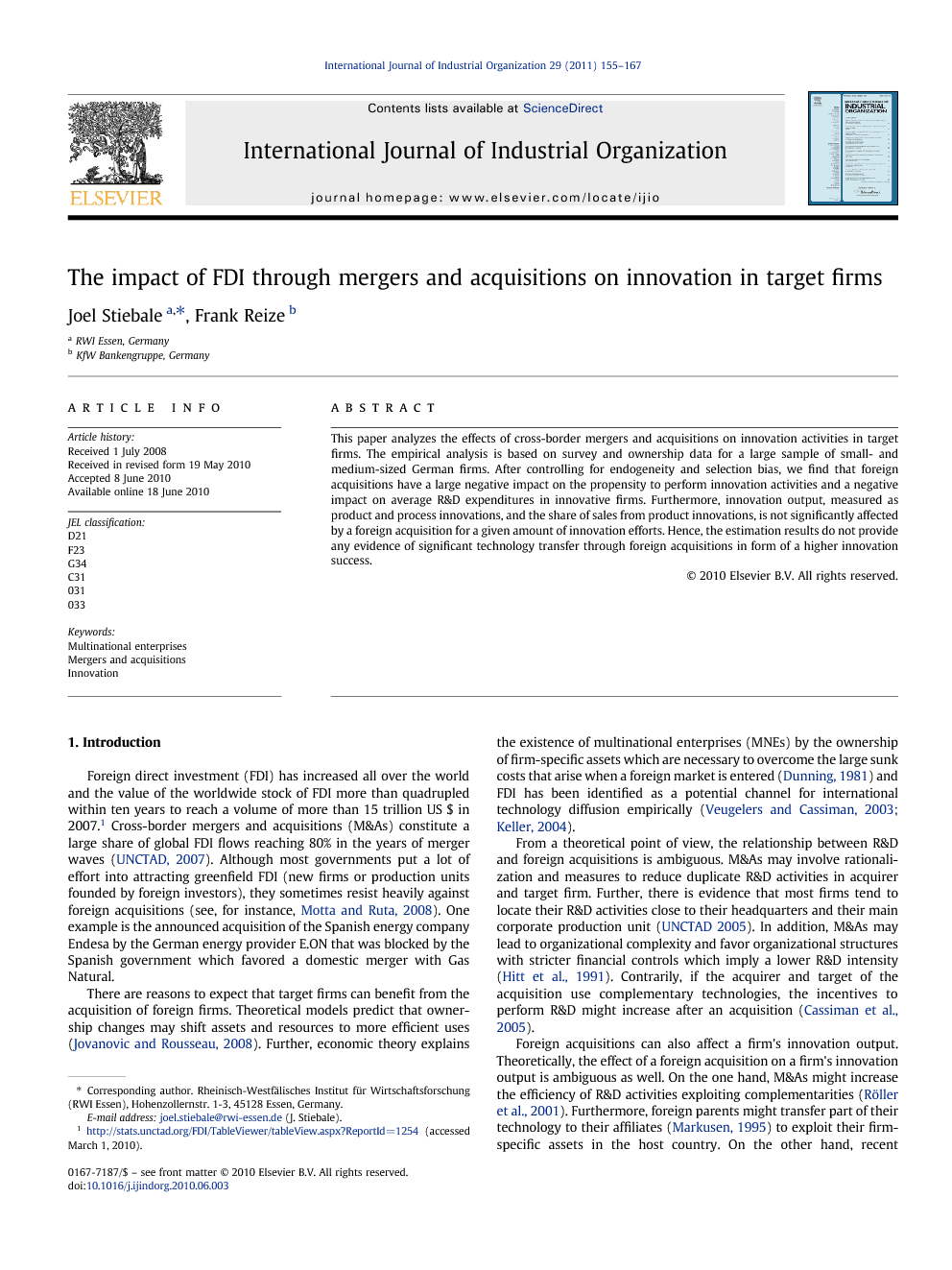 This paper analyzes the effects of cross-border mergers and acquisitions on innovation activities in target firms. The empirical analysis is based on survey and ownership data for a large sample of small- and medium-sized German firms. After controlling for endogeneity and selection bias, we find that foreign acquisitions have a large negative impact on the propensity to perform innovation activities and a negative impact on average R&D expenditures in innovative firms. Furthermore, innovation output, measured as product and process innovations, and the share of sales from product innovations, is not significantly affected by a foreign acquisition for a given amount of innovation efforts. Hence, the estimation results do not provide any evidence of significant technology transfer through foreign acquisitions in form of a higher innovation success.

Foreign direct investment (FDI) has increased all over the world and the value of the worldwide stock of FDI more than quadrupled within ten years to reach a volume of more than 15 trillion US $ in 2007.1 Cross-border mergers and acquisitions (M&As) constitute a large share of global FDI flows reaching 80% in the years of merger waves (UNCTAD, 2007). Although most governments put a lot of effort into attracting greenfield FDI (new firms or production units founded by foreign investors), they sometimes resist heavily against foreign acquisitions (see, for instance, Motta and Ruta, 2008). One example is the announced acquisition of the Spanish energy company Endesa by the German energy provider E.ON that was blocked by the Spanish government which favored a domestic merger with Gas Natural. There are reasons to expect that target firms can benefit from the acquisition of foreign firms. Theoretical models predict that ownership changes may shift assets and resources to more efficient uses (Jovanovic and Rousseau, 2008). Further, economic theory explains the existence of multinational enterprises (MNEs) by the ownership of firm-specific assets which are necessary to overcome the large sunk costs that arise when a foreign market is entered (Dunning, 1981) and FDI has been identified as a potential channel for international technology diffusion empirically (Veugelers and Cassiman, 2003 and Keller, 2004). From a theoretical point of view, the relationship between R&D and foreign acquisitions is ambiguous. M&As may involve rationalization and measures to reduce duplicate R&D activities in acquirer and target firm. Further, there is evidence that most firms tend to locate their R&D activities close to their headquarters and their main corporate production unit (UNCTAD 2005). In addition, M&As may lead to organizational complexity and favor organizational structures with stricter financial controls which imply a lower R&D intensity (Hitt et al., 1991). Contrarily, if the acquirer and target of the acquisition use complementary technologies, the incentives to perform R&D might increase after an acquisition (Cassiman et al., 2005). Foreign acquisitions can also affect a firm's innovation output. Theoretically, the effect of a foreign acquisition on a firm's innovation output is ambiguous as well. On the one hand, M&As might increase the efficiency of R&D activities exploiting complementarities (Röller et al., 2001). Furthermore, foreign parents might transfer part of their technology to their affiliates (Markusen, 1995) to exploit their firm-specific assets in the host country. On the other hand, recent theoretical approaches argue that cross-border M&As are rather conducted to access the target firms' assets than to solely exploit existing assets of the investor (Nocke and Yeaple, 2008). Moreover, Watts (1981) argues that innovations might be exploited mainly in the region where ownership is located rather than in the region where the innovation took place. Empirical approaches that analyze the host country effects of FDI or foreign acquisitions usually relate labor or total factor productivity of local firms to (changes in) foreign ownership or to the presence of foreign investors in the same sector or region. Positive coefficients for the FDI measure are then interpreted as evidence for technology spillovers. Comparing the productivity of domestic and foreign-owned firms, many studies indeed find that firms with foreign ownership outperform domestic firms (e.g. Doms and Jensen, 1998 and Griffith, 1999 to mention a few). However, recent empirical contributions cast doubt on the notion that these productivity differences imply a causal relationship between foreign acquisitions and productivity growth in target firms - because of simultaneity and correlation of foreign acquisitions with characteristics that are unobserved by the researcher - and argue that the effects of previous studies are at best overestimated (Benfratello and Sembenelli, 2006 and Harris and Robinson, 2002).2 In addition, differences in productivity are only a very rough measure of technological performance. As the main result of technological progress and innovation are new and improved products, not all relevant advances might show up in an equation that relates value added to input factors. Hence, a more adequate way might be to look at innovation indicators directly and to evaluate the impact of foreign acquisitions on innovation input and output, i.e. expenditures for research and development (R&D) and product and process innovations in target firms, respectively. The purpose of this paper is to investigate the causal effect of foreign acquisitions on innovation input and output in target firms. Our paper contributes to the existing literature in several aspects. First, in contrast to previous studies, our paper has an explicit focus on controlling for endogeneity and selection bias. Accounting for endogeneity can be important if foreign investors choose target firms on the basis of factors unobserved to the researcher. Accounting for selection into the sample of firms with positive R&D expenditures is necessary if foreign investors affect the probability that target firms engage in innovation activities at all. For this purpose, we estimate an empirical model that simultaneously explains the propensity of a foreign acquisition, the probability that a firm engages in R&D and the amount of R&D expenditures. As our sample contains innovative and non-innovative firms, we can also analyze the effect of foreign acquisitions on the probability that an acquisition target engages in R&D or innovative activities in the first place. Further, we explore the relationship between foreign acquisitions and innovation in target firms not only with respect to R&D, but also with respect to innovation output.3 Finally, we investigate the robustness of the relationship between cross-border acquisitions and innovation using alternative empirical strategies with different identifying assumptions. The empirical framework is applied to a micro data set of German firms. The case of Germany is particularly interesting as it is one of the most technologically advanced countries in the world and is considerably engaged in FDI and cross-border acquisitions (UNCTAD, 2007). The rest of the paper is organized as follows. In Section 2, we summarize the related literature. Section 3 provides a description of the data, Section 4 describes the empirical model. Results of the empirical analysis are presented in 5 and 6 concludes this paper.