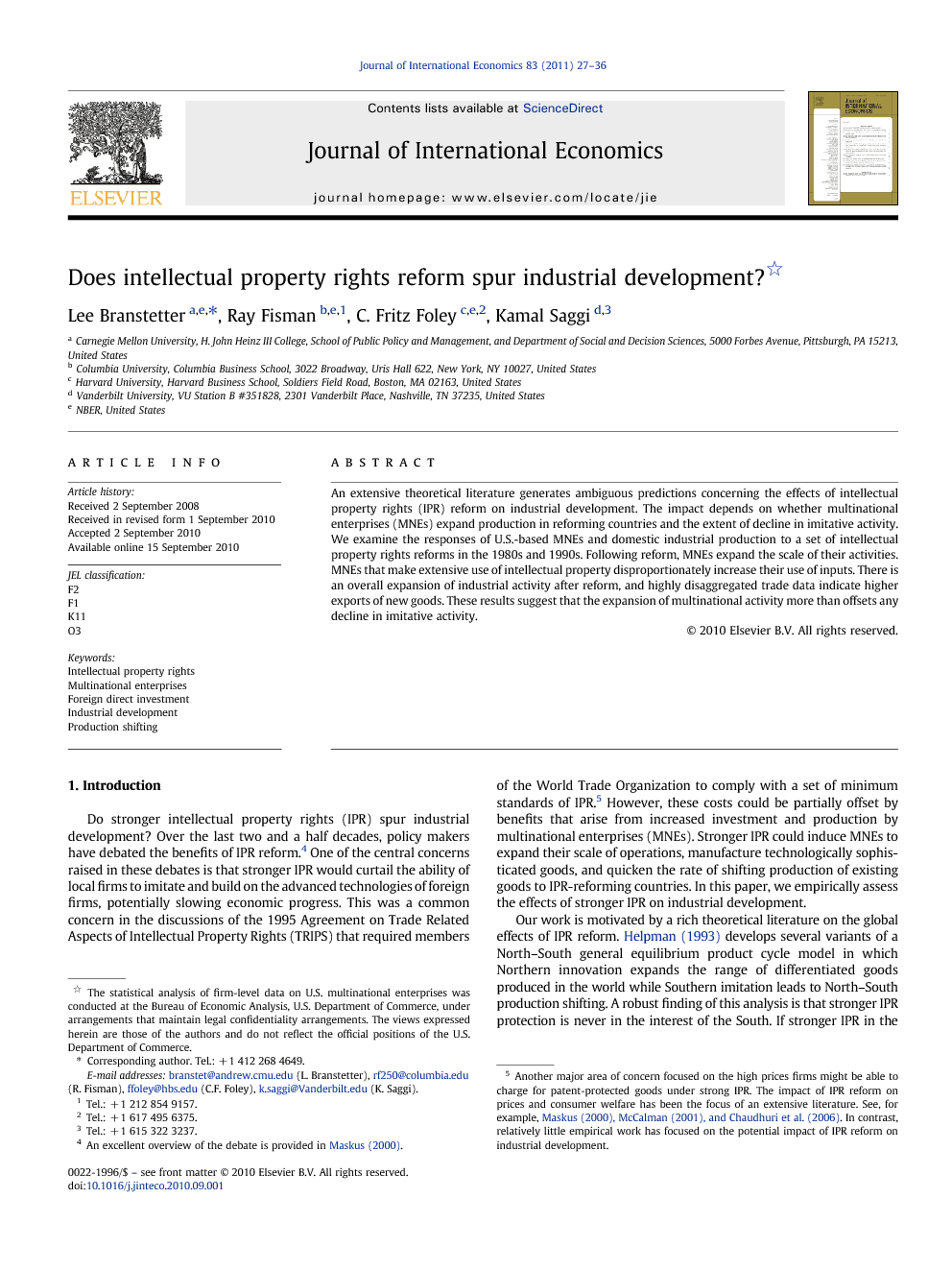 An extensive theoretical literature generates ambiguous predictions concerning the effects of intellectual property rights (IPR) reform on industrial development. The impact depends on whether multinational enterprises (MNEs) expand production in reforming countries and the extent of decline in imitative activity. We examine the responses of U.S.-based MNEs and domestic industrial production to a set of intellectual property rights reforms in the 1980s and 1990s. Following reform, MNEs expand the scale of their activities. MNEs that make extensive use of intellectual property disproportionately increase their use of inputs. There is an overall expansion of industrial activity after reform, and highly disaggregated trade data indicate higher exports of new goods. These results suggest that the expansion of multinational activity more than offsets any decline in imitative activity.

Do stronger intellectual property rights (IPR) spur industrial development? Over the last two and a half decades, policy makers have debated the benefits of IPR reform.4 One of the central concerns raised in these debates is that stronger IPR would curtail the ability of local firms to imitate and build on the advanced technologies of foreign firms, potentially slowing economic progress. This was a common concern in the discussions of the 1995 Agreement on Trade Related Aspects of Intellectual Property Rights (TRIPS) that required members of the World Trade Organization to comply with a set of minimum standards of IPR.5 However, these costs could be partially offset by benefits that arise from increased investment and production by multinational enterprises (MNEs). Stronger IPR could induce MNEs to expand their scale of operations, manufacture technologically sophisticated goods, and quicken the rate of shifting production of existing goods to IPR-reforming countries. In this paper, we empirically assess the effects of stronger IPR on industrial development. Our work is motivated by a rich theoretical literature on the global effects of IPR reform. Helpman (1993) develops several variants of a North–South general equilibrium product cycle model in which Northern innovation expands the range of differentiated goods produced in the world while Southern imitation leads to North–South production shifting. A robust finding of this analysis is that stronger IPR protection is never in the interest of the South. If stronger IPR in the South is treated as a reduction in the rate of Southern imitation and Northern firms are assumed to not shift production to the South through foreign direct investment (FDI), Southern IPR reform lowers the rate of Northern innovation and thereby limits the portfolio of products available globally. 6 If North–South FDI is permitted, a reduction in Southern imitation leads to more FDI but hurts the South because Northern multinationals charge higher prices than Southern imitators. Lai (1998) extends Helpman (1993) to allow both the level of FDI and Northern innovation to respond endogenously to changes in the strength of Southern IPR protection, and this model is further extended in Branstetter et al. (2007), to the case where innovation, FDI, and imitation are all endogenously determined. In these extensions, unlike Helpman (1993), in any equilibrium with a positive rate of imitation, North–South FDI does not lead to factor price equalization. A lower wage in the South creates an incentive to move production of existing varieties there, but multinationals seeking to benefit from this incur a higher risk of imitation when they move production to the South. In Branstetter et al. (2007), as in Grossman and Helpman (1991a), imitation is a costly activity that requires a deliberate investment on the part of Southern firms seeking to copy Northern products. Stronger IPR protection in the South increases these costs, reducing imitation and lowering the risks faced by multinationals. Multinationals that move to the South employ the labor resources freed up by the decline in imitative activity. Production shifting allows for a reallocation of Northern resources towards innovative activity. Under certain parameter assumptions, a strengthening of Southern IPR protection enhances Southern industrial development because the increase in North–South FDI more than offsets the decrease in Southern imitation. We test three hypotheses that follow from this theory. First, using detailed data on U.S. MNE activity, we seek to determine whether multinational firms respond to reforms by increasing production in reforming countries. Second, we use industry-level data to test whether growth in production by MNEs and local firms that are not engaging in imitation exceeds the decline in imitative activity. Finally, we look for evidence that the production of new goods shifts to reforming countries by analyzing initial export episodes that are identified in disaggregated U.S. trade statistics. In our analyses, we focus on the effects of well-documented discrete changes in patent regimes over the 1980s and 1990s. We follow Branstetter et al. (2006), which assemble a set of substantive IPR reforms based on a number of primary and secondary sources. These are listed in Table 1.7 Our approach of analyzing responses to well-defined IPR changes has the advantage that we may use fixed effects to control for features of the business environment in a country that are constant, that are hard to measure, that are correlated with the strength of IPR in the country cross-section, and that may affect firm behavior and industrial development in a manner similar to IPR.8 We provide a more detailed discussion of these reforms below.

Building on the work of Grossman and Helpman, 1991a and Helpman, 1993, the theoretical literature on North–South product cycle models of international trade and investment shows that the effect of Southern IPR reform on the global economy hinge critically on the responses of multinational firms. In particular, this literature shows that if multinational firms based in the North are sufficiently responsive to the change in the Southern IPR regime, the expansion of their Southern affiliates could more than offset a decline in indigenous Southern imitation, thus spurring industrial development in the South. In this paper, we empirically confront hypotheses derived from these theories with a mix of evidence drawn from data on the activities of U.S. multinational affiliates, industry-level data from reforming countries, and disaggregated U.S. import data. We analyze changes in measures of affiliate activity, industry activity, and the introduction of new products in response to IPR reforms in 16 countries. All of the evidence indicates that stronger IPR in the South accelerates the transfer of production to reforming countries. We find that U.S. MNE affiliate activity increases following reform and that increases are most pronounced among affiliates of firms that tend to deploy more technology abroad and that are therefore more likely to benefit from reform. These findings are consistent with parents sharing new technology with their affiliates so that these affiliates can begin the manufacture of new, more sophisticated goods. The increase in production shifting through multinational firms could be smaller than the decrease in imitative activity by indigenous Southern producers. Evidence from industry-level value-added data suggests that this is not the case. Rather, the estimated effect of reform on industry activity implies that the increase in activity by MNEs and other firms that are not engaging in imitative activity more than compensates for any decline in imitation. Furthermore, evidence from highly disaggregated U.S. import data indicates that initial export episodes increase following reform. Analyses of changes in industrial activity after reform point out that activity in technology-intensive industries responds particularly strongly to reform. Stronger IPR in the South appears to lead to an acceleration of production shifting, enhancing Southern industrial development. Over the long run, production shifting should free up Northern resources for investment in innovative activity. In this paper, we do not attempt to estimate the magnitude or timing of this longer run, general equilibrium effect. However, other researchers have noted a robust expansion of U.S. innovative activity in the 1990s, even as manufacturing jobs have continued to move offshore. The rate of growth of real R&D spending in the U.S. accelerated significantly in the 1980s and 1990s as the IPR reforms we study unfolded. Relative to inventors based in other countries, those in the U.S. appear to have increased their generation of new ideas.30 Along with this surge in innovative outcomes has come an acceleration in total factor productivity growth, which has persisted in recent years.31 These developments are consistent with the kind of general equilibrium resource reallocation stressed in product cycle models like the one in Grossman and Helpman (1991b). However, these are complex phenomena with multiple causes; exploring the potential link between production shifting and the apparent acceleration of innovation in the U.S. is a focus of ongoing research.