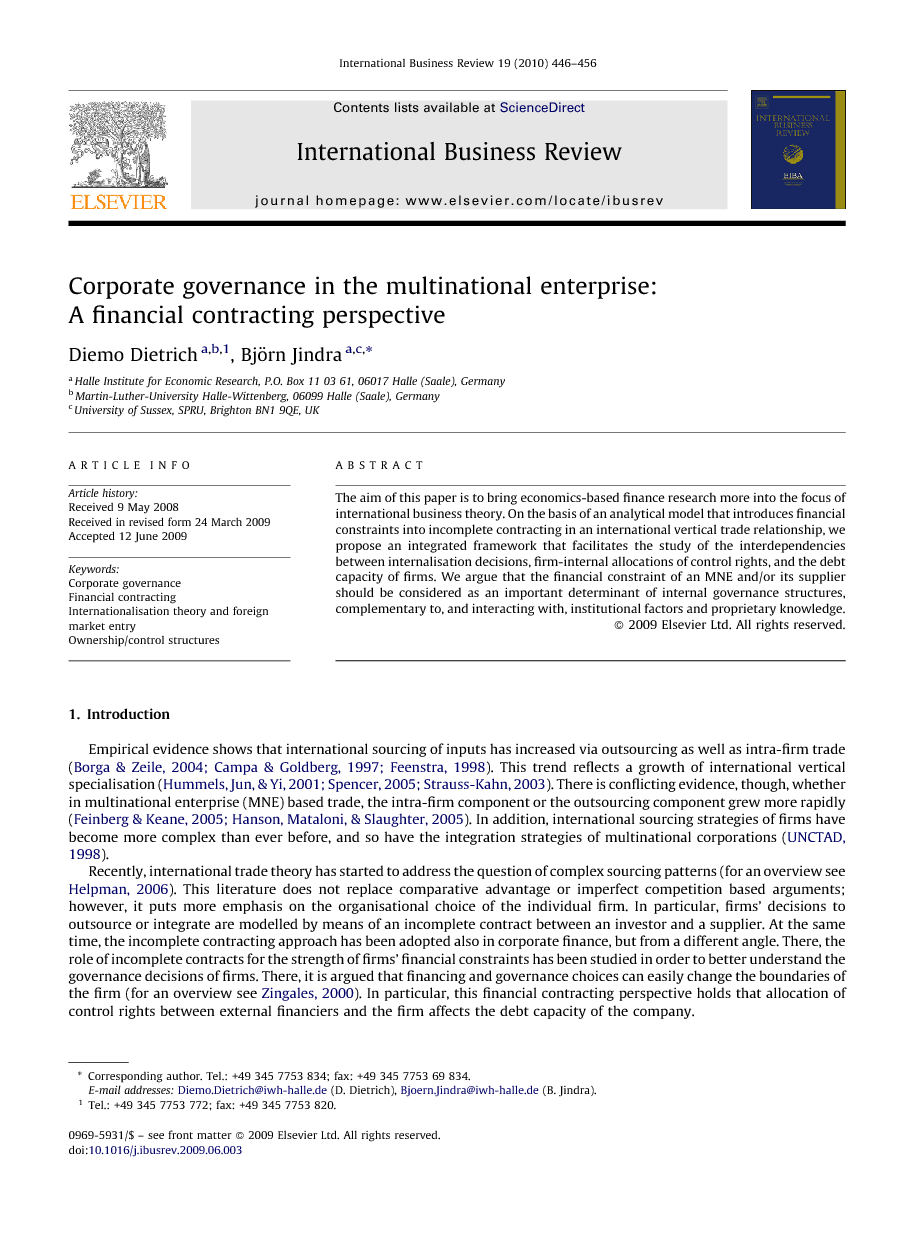 The aim of this paper is to bring economics-based finance research more into the focus of international business theory. On the basis of an analytical model that introduces financial constraints into incomplete contracting in an international vertical trade relationship, we propose an integrated framework that facilitates the study of the interdependencies between internalisation decisions, firm-internal allocations of control rights, and the debt capacity of firms. We argue that the financial constraint of an MNE and/or its supplier should be considered as an important determinant of internal governance structures, complementary to, and interacting with, institutional factors and proprietary knowledge.

Empirical evidence shows that international sourcing of inputs has increased via outsourcing as well as intra-firm trade (Borga and Zeile, 2004, Campa and Goldberg, 1997 and Feenstra, 1998). This trend reflects a growth of international vertical specialisation (Hummels et al., 2001, Spencer, 2005 and Strauss-Kahn, 2003). There is conflicting evidence, though, whether in multinational enterprise (MNE) based trade, the intra-firm component or the outsourcing component grew more rapidly (Feinberg and Keane, 2005 and Hanson et al., 2005). In addition, international sourcing strategies of firms have become more complex than ever before, and so have the integration strategies of multinational corporations (UNCTAD, 1998). Recently, international trade theory has started to address the question of complex sourcing patterns (for an overview see Helpman, 2006). This literature does not replace comparative advantage or imperfect competition based arguments; however, it puts more emphasis on the organisational choice of the individual firm. In particular, firms’ decisions to outsource or integrate are modelled by means of an incomplete contract between an investor and a supplier. At the same time, the incomplete contracting approach has been adopted also in corporate finance, but from a different angle. There, the role of incomplete contracts for the strength of firms’ financial constraints has been studied in order to better understand the governance decisions of firms. There, it is argued that financing and governance choices can easily change the boundaries of the firm (for an overview see Zingales, 2000). In particular, this financial contracting perspective holds that allocation of control rights between external financiers and the firm affects the debt capacity of the company. So far, transaction cost-based thinking has been very influential in international business theory. This applies especially to the role of proprietary knowledge and technology in the internalisation strategy of MNEs. Yet, applying an incomplete contracting approach would also allow to capture the effects of cross-country institutional differences on the organisational choice of firms in vertical relationships. Furthermore, unlike in the internalisation school of international business, firms’ financing constraints can also be incorporated in an incomplete contracting framework. Eventually, integrating the role of external financiers may generate important additional hypotheses about the economic role of the internal allocation of control rights within MNEs. Therefore, in this paper we investigate how financial constraints of firms influence the organisational choice and cross-border governance structure in a vertical trade relationship. By introducing a wealth constraint into an incomplete contract approach to trade, we propose an integrated framework that allows us to study the interdependencies between MNEs’ internalisation decisions, firm-internal allocation of control rights, and debt capacity. Our perspective provides a finance-related rationale for vertical integration in a relationship between foreign investor, supplier, and external financiers. Thereby, we consider the conditions under which outsourcing or integration is more prevalent. In the case of integration, we further differentiate two possible internal governance structures. The first is investor control, where a foreign investor as the owner of a vertically integrated foreign subsidiary exerts complete control over his foreign entity. The second is supplier control, where control is (partially) delegated to the foreign subsidiary. The proposed framework adds to international business theory by showing that financial constraints of firms can be seen as an alternative rationale for vertical integration in MNEs. This aspect is complementary to, and interacts with, institutional factors and proprietary knowledge that have been studied so far. In addition, we add to the theory of corporate finance in that we explicitly focus on firm-internal governance structures and not just on aspects of corporate control referring to the firm and its outsiders. We also consider the effects of internal governance mechanisms on debt capacity in the setting of a multinational firm. The paper is organised as follows. In Section 2, we discuss recent theoretical developments in international trade and corporate finance in order to demonstrate how these two strands of literature might be insightful to international business as we know it. In Section 3, we present our model and derive our main results. In Section 4, we place particular emphasis on the international aspects of the model, discuss alternative governance mechanisms, and summarise the empirical implications of the model proposed. In the final section, we provide some concluding remarks.

The main contribution of this paper has been twofold. First, we contribute to international business theory by applying a financial contract approach to the integration decision and to the allocation of control rights in a vertical investment project. The model suggests that financial constraint of the MNE and/or supplier should be seen as a further determinant of internal governance structures, complementary to, and interacting with institutional factors and proprietary knowledge that have been considered so far. Second, we contribute to the theory of corporate finance in that we explicitly focus on firm-internal governance structures and not merely on aspects of corporate control referring to the firm and its outsiders. We study the effects of internal governance mechanisms on outside financing capacity, in particular in the context of a multinational enterprise. Our framework hopefully gives an impulse for future potential research. One direction may concern the question as to how the structure and diversity of the MNE across industries and countries could affect its financial constraint and the internal governance structures related to new investment projects. As indicated above, it is feasible that governance structures between headquarters and different subsidiaries are interrelated, when taking into account the MNE's position vis-à-vis its outside financiers. A second promising avenue for future research could be to differentiate explicitly between debt and equity as alternative financing instruments and allocations of control rights. In our context, these considerations are then not only relevant in the relationship between the MNE and its outside financiers, but also between MNE and the supplier. Finally, future research could also explore the extent to which the financial contract approach provides a rationale for horizontal cross-border integration decisions.