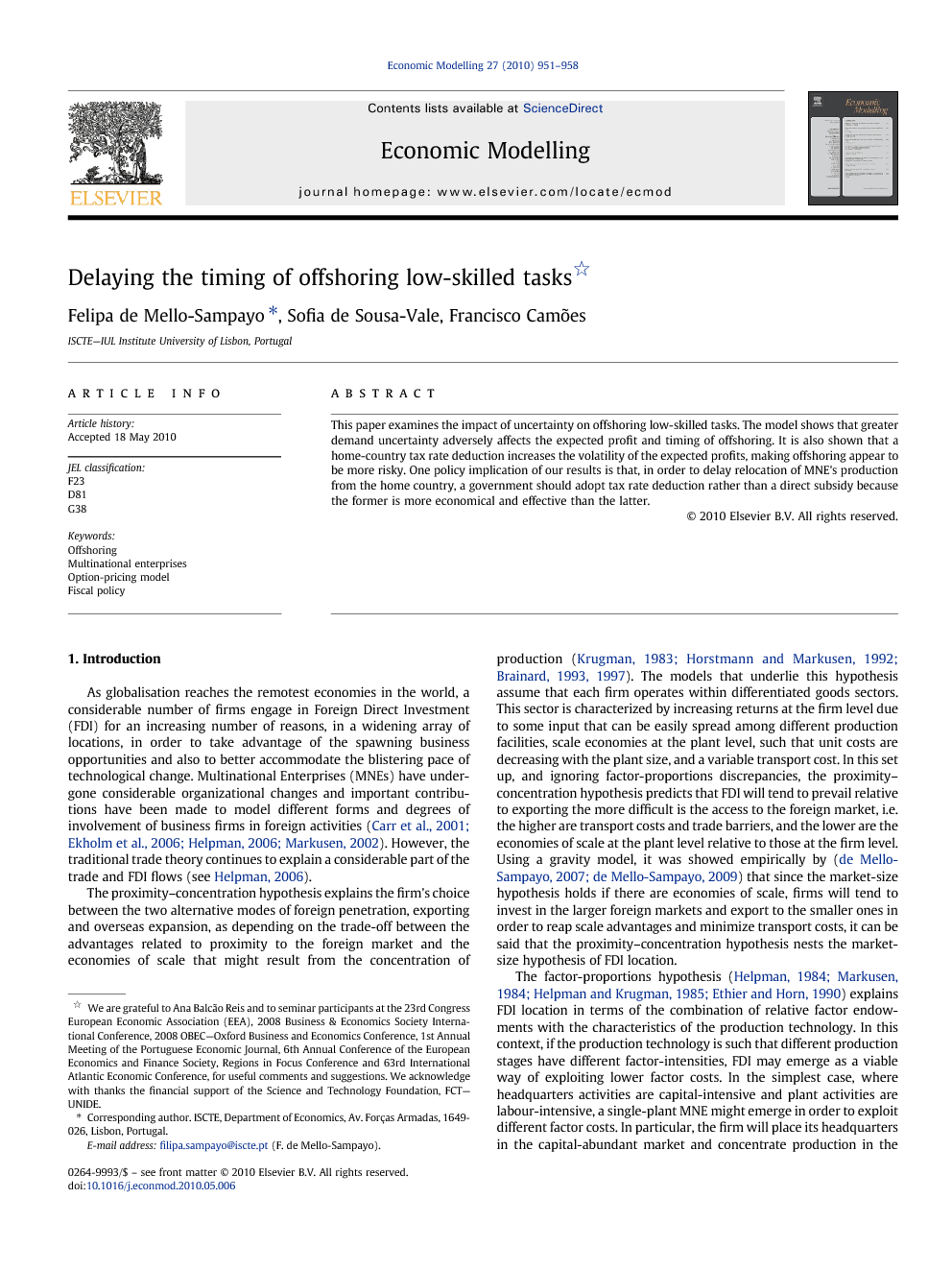 This paper examines the impact of uncertainty on offshoring low-skilled tasks. The model shows that greater demand uncertainty adversely affects the expected profit and timing of offshoring. It is also shown that a home-country tax rate deduction increases the volatility of the expected profits, making offshoring appear to be more risky. One policy implication of our results is that, in order to delay relocation of MNE's production from the home country, a government should adopt tax rate deduction rather than a direct subsidy because the former is more economical and effective than the latter.

In an ever faster-changing market environment, the optimal timing for expanding abroad becomes increasingly relevant for firms considering engaging in offshoring low-skilled tasks. In this regard, this paper sets up a stochastic model that provides an optimal rule for the timing of offshoring. In the real world, demand fluctuations among others render the outcome of any investment uncertain, so that a firm might have to wait for more information before optimally engaging in offshoring, especially when investment costs cannot be fully recovered later on. Since, in most cases, the firm is not compelled to engage in offshoring at any specific moment, it holds an option to invest abroad that should only be exercised when it is optimal to do so. Focusing on uncertainty is important because emerging markets are potential recipients of most offshoring low-skilled tasks, since their relative factor endowments and other features differ from those of mature economies where parent firms are based, and because developing countries are also characterized by much greater uncertainty than developed countries. Viewing from the perspective of real option theory, this paper sheds new light on some debates about offshoring low-skilled tasks. Our theoretical model suggests that demand uncertainty reduces expected profits under onshoring and offshoring low-skilled tasks. In addition, demand volatility discourages offshoring low-skilled tasks. The stochastic model also illustrates that as the foreign country becomes less labour competitive, the uncertainty of the demand becomes more dominant. With limited substitutability, low productivity in a foreign location will increase the demand for labour in order to compensate for the decrease in productivity. If we were analysing a horizontal MNE, it would have experienced a fall in the demand for labour as output shifted to more productive locations. This increases the uncertainty of the offshoring venture. Traditionally, when a firm engages in offshoring low-skilled tasks, home-country workers that lose their jobs tend to be older, less educated and hence less easily re-employable than others. We assume that governments tend to delay the timing of offshoring in order to set up, for example, a retraining scheme for the workers that will be unemployed when the firms exercise the option to invest abroad. We provide some answers about how home countries' fiscal policies affect offshoring timing as well as which policy a host government should adopt to delay the timing of offshoring. We show that, while holding their thresholds equal, a tax rate deduction costs less than a direct subsidy. Also, while holding the expected present value of the tax rate deduction and direct subsidy equal, the tax rate deduction would more greatly delay the timing of offshoring than the direct subsidy would. One meaningful policy implication of our results is that a home government, hoping to delay the MNE's offshoring decision, should make more efforts to offer tax rate deductions than to offer non-tax subsidies, because the tax rate deduction is relatively economical and efficient.