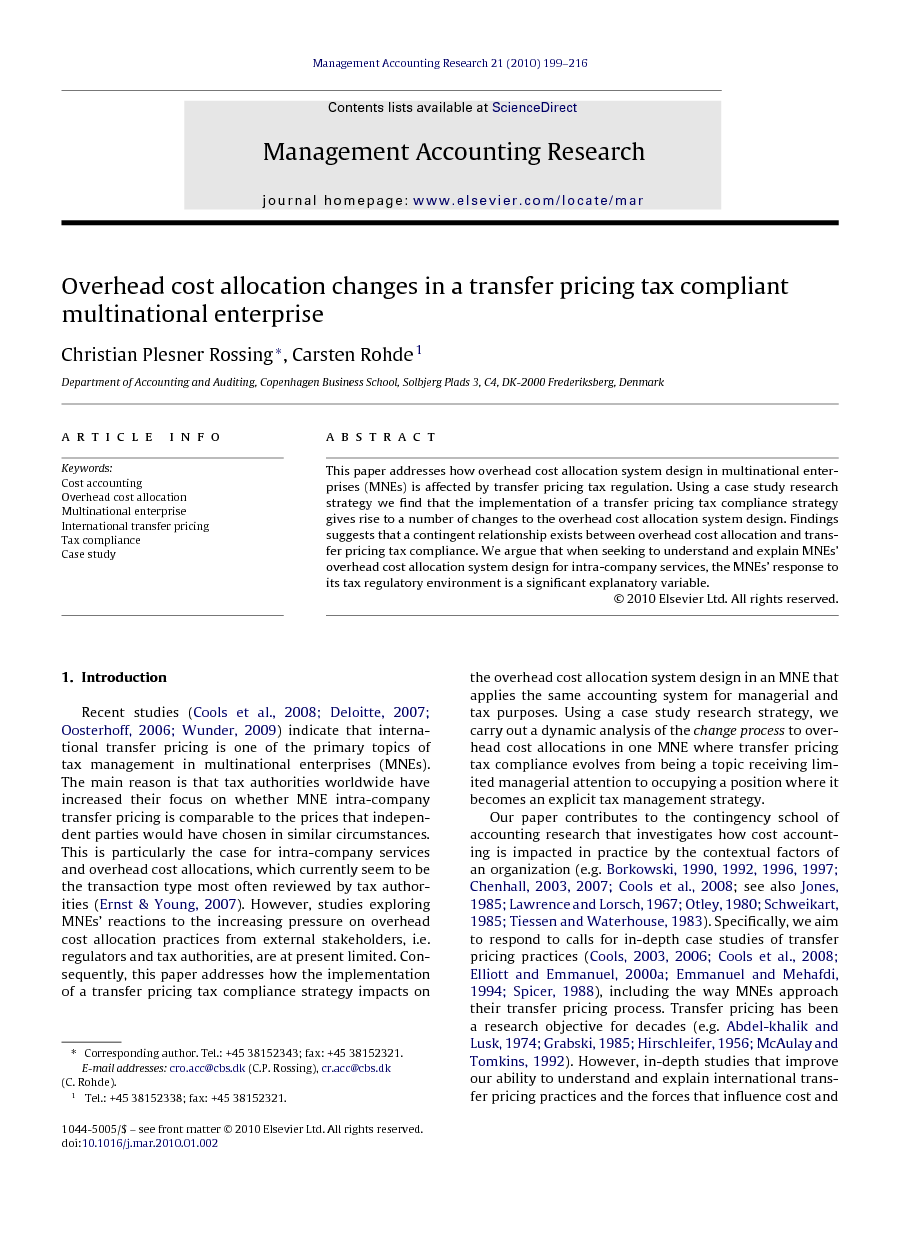 Recent studies (Cools et al., 2008, Deloitte, 2007, Oosterhoff, 2006 and Wunder, 2009) indicate that international transfer pricing is one of the primary topics of tax management in multinational enterprises (MNEs). The main reason is that tax authorities worldwide have increased their focus on whether MNE intra-company transfer pricing is comparable to the prices that independent parties would have chosen in similar circumstances. This is particularly the case for intra-company services and overhead cost allocations, which currently seem to be the transaction type most often reviewed by tax authorities (Ernst & Young, 2007). However, studies exploring MNEs’ reactions to the increasing pressure on overhead cost allocation practices from external stakeholders, i.e. regulators and tax authorities, are at present limited. Consequently, this paper addresses how the implementation of a transfer pricing tax compliance strategy impacts on the overhead cost allocation system design in an MNE that applies the same accounting system for managerial and tax purposes. Using a case study research strategy, we carry out a dynamic analysis of the change process to overhead cost allocations in one MNE where transfer pricing tax compliance evolves from being a topic receiving limited managerial attention to occupying a position where it becomes an explicit tax management strategy. Our paper contributes to the contingency school of accounting research that investigates how cost accounting is impacted in practice by the contextual factors of an organization (e.g. Borkowski, 1990, Borkowski, 1992, Borkowski, 1996, Borkowski, 1997, Chenhall, 2003, Chenhall, 2007 and Cools et al., 2008; see also Jones, 1985, Lawrence and Lorsch, 1967, Otley, 1980, Schweikart, 1985 and Tiessen and Waterhouse, 1983). Specifically, we aim to respond to calls for in-depth case studies of transfer pricing practices (Cools, 2003, Cools, 2006, Cools et al., 2008, Elliott and Emmanuel, 2000a, Emmanuel and Mehafdi, 1994 and Spicer, 1988), including the way MNEs approach their transfer pricing process. Transfer pricing has been a research objective for decades (e.g. Abdel-khalik and Lusk, 1974, Grabski, 1985, Hirschleifer, 1956 and McAulay and Tomkins, 1992). However, in-depth studies that improve our ability to understand and explain international transfer pricing practices and the forces that influence cost and management accounting change are very few. As emphasized by Emmanuel and Mehafdi (1994):