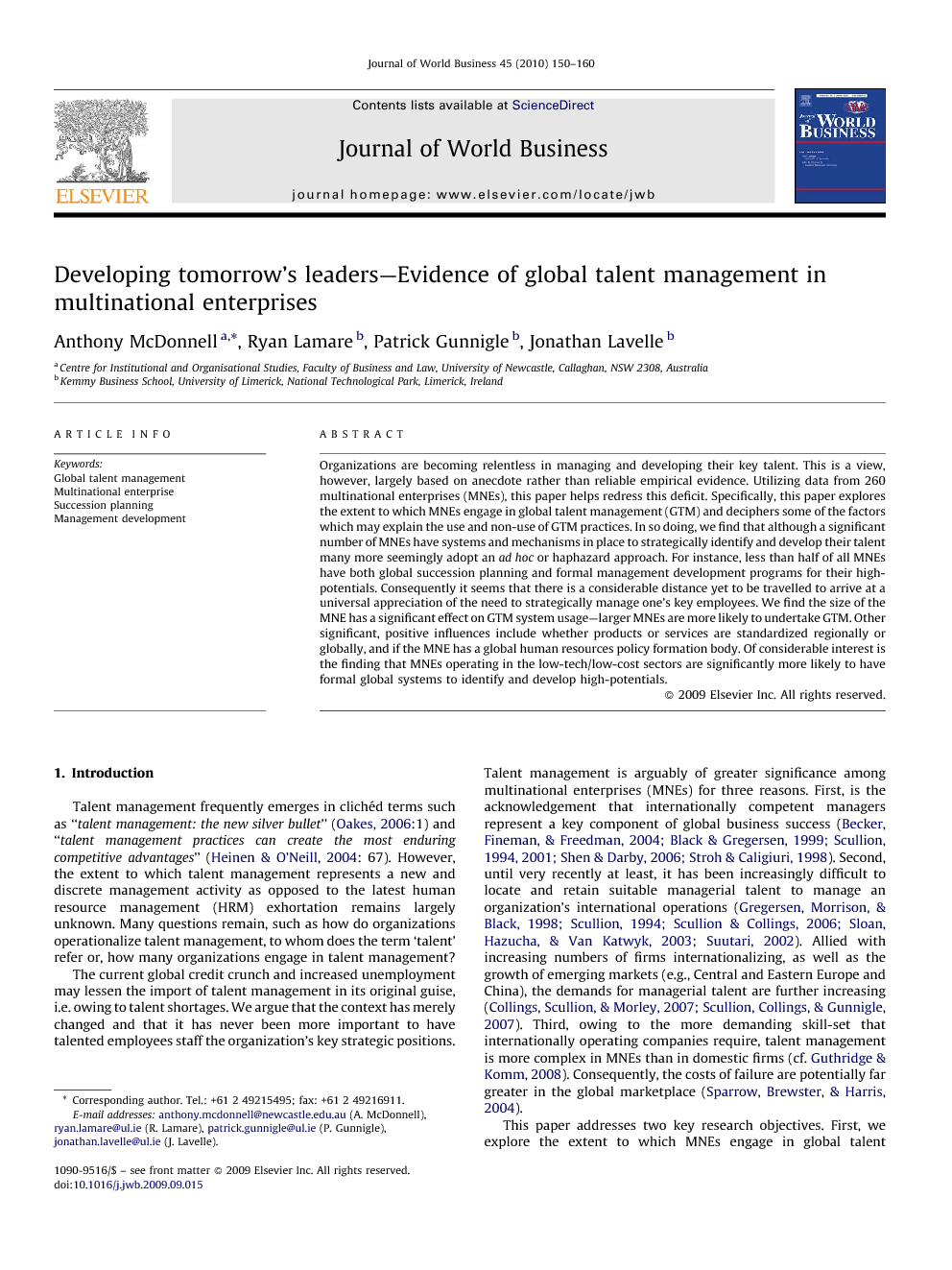 Organizations are becoming relentless in managing and developing their key talent. This is a view, however, largely based on anecdote rather than reliable empirical evidence. Utilizing data from 260 multinational enterprises (MNEs), this paper helps redress this deficit. Specifically, this paper explores the extent to which MNEs engage in global talent management (GTM) and deciphers some of the factors which may explain the use and non-use of GTM practices. In so doing, we find that although a significant number of MNEs have systems and mechanisms in place to strategically identify and develop their talent many more seemingly adopt an ad hoc or haphazard approach. For instance, less than half of all MNEs have both global succession planning and formal management development programs for their high-potentials. Consequently it seems that there is a considerable distance yet to be travelled to arrive at a universal appreciation of the need to strategically manage one's key employees. We find the size of the MNE has a significant effect on GTM system usage—larger MNEs are more likely to undertake GTM. Other significant, positive influences include whether products or services are standardized regionally or globally, and if the MNE has a global human resources policy formation body. Of considerable interest is the finding that MNEs operating in the low-tech/low-cost sectors are significantly more likely to have formal global systems to identify and develop high-potentials.

Talent management frequently emerges in clichéd terms such as “talent management: the new silver bullet” ( Oakes, 2006:1) and “talent management practices can create the most enduring competitive advantages” ( Heinen & O’Neill, 2004: 67). However, the extent to which talent management represents a new and discrete management activity as opposed to the latest human resource management (HRM) exhortation remains largely unknown. Many questions remain, such as how do organizations operationalize talent management, to whom does the term ‘talent’ refer or, how many organizations engage in talent management? The current global credit crunch and increased unemployment may lessen the import of talent management in its original guise, i.e. owing to talent shortages. We argue that the context has merely changed and that it has never been more important to have talented employees staff the organization's key strategic positions. Talent management is arguably of greater significance among multinational enterprises (MNEs) for three reasons. First, is the acknowledgement that internationally competent managers represent a key component of global business success (Becker et al., 2004, Black and Gregersen, 1999, Scullion, 1994, Scullion, 2001, Shen and Darby, 2006 and Stroh and Caligiuri, 1998). Second, until very recently at least, it has been increasingly difficult to locate and retain suitable managerial talent to manage an organization's international operations (Gregersen et al., 1998, Scullion, 1994, Scullion and Collings, 2006, Sloan et al., 2003 and Suutari, 2002). Allied with increasing numbers of firms internationalizing, as well as the growth of emerging markets (e.g., Central and Eastern Europe and China), the demands for managerial talent are further increasing (Collings et al., 2007 and Scullion et al., 2007). Third, owing to the more demanding skill-set that internationally operating companies require, talent management is more complex in MNEs than in domestic firms (cf. Guthridge & Komm, 2008). Consequently, the costs of failure are potentially far greater in the global marketplace (Sparrow, Brewster, & Harris, 2004). This paper addresses two key research objectives. First, we explore the extent to which MNEs engage in global talent management. More particularly, we discern the extent to which MNEs have formal global succession planning and management development programs in place for their high-potentials. In addition, we explore the use of a number of developmental mechanisms. Second, we decipher the factors which may explain engagement or not in GTM. Through informing these objectives, we point to a number of contributions. Most notably, we provide much-needed empirical evidence on a growing research field. Pre-existing research has tended to be based upon anecdotal practitioner/consultancy views and small case study-based investigations (cf. Boussebaa and Morgan, 2008, Brandt and Kull, 2007, CIPD, 2006, Piansoongnern et al., 2008, Stahl et al., 2007 and Stiles et al., 2006). Talent management in the global context is particularly under-researched. For example, Collings, Scullion, and Dowling (2009) call for research to explore the approaches taken to international talent management in different types of international organizations and the methods being used by MNEs to coordinate their talent conduit globally. This paper contributes to this through the development of a framework of four GTM approaches and an analysis of the extent to which five independent variables explain engagement in GTM. In so doing, this paper sheds light on whether MNEs manage their talent in a coordinated and integrated manner (Sparrow et al., 2004). This will provide a yardstick of the degree to which MNEs are strategically identifying and developing their human talent globally.

This paper has explored the extent to which MNEs use a number of practices which have been construed to incorporate GTM. In addition, we have also analyzed some of the factors which may explain the use of these measures. In one of the few studies on GTM, Stahl et al. (2007) suggest there are a number of practices (e.g., succession planning, leadership development, and performance management) which, if utilized effectively, can assist organizations in identifying, developing and retaining key human capital. They also suggest that there is a global convergence emerging in talent management. Overall, mixed results emerged with respect to our GTM measures. Almost six in ten MNEs indicated the use of global succession planning, while there were also a number of MNEs that indicated it was a process conducted informally. However, one must wonder the efficacy of an informal system. Is it possible for such organizations to identify and make proper use of key talent throughout their operations? The potential drawback of not having a formal system is highlighted through the following quote: