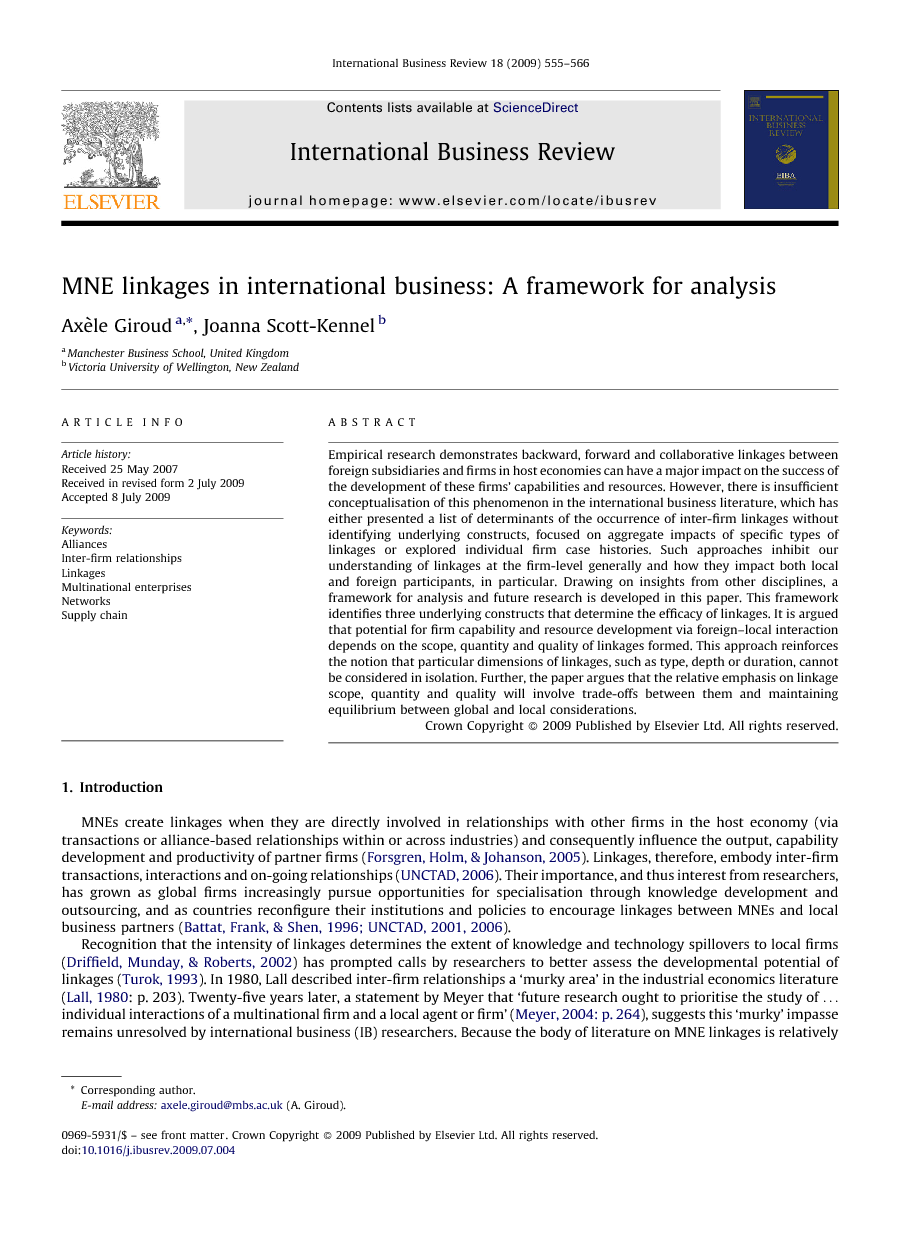 Empirical research demonstrates backward, forward and collaborative linkages between foreign subsidiaries and firms in host economies can have a major impact on the success of the development of these firms’ capabilities and resources. However, there is insufficient conceptualisation of this phenomenon in the international business literature, which has either presented a list of determinants of the occurrence of inter-firm linkages without identifying underlying constructs, focused on aggregate impacts of specific types of linkages or explored individual firm case histories. Such approaches inhibit our understanding of linkages at the firm-level generally and how they impact both local and foreign participants, in particular. Drawing on insights from other disciplines, a framework for analysis and future research is developed in this paper. This framework identifies three underlying constructs that determine the efficacy of linkages. It is argued that potential for firm capability and resource development via foreign–local interaction depends on the scope, quantity and quality of linkages formed. This approach reinforces the notion that particular dimensions of linkages, such as type, depth or duration, cannot be considered in isolation. Further, the paper argues that the relative emphasis on linkage scope, quantity and quality will involve trade-offs between them and maintaining equilibrium between global and local considerations.

MNEs create linkages when they are directly involved in relationships with other firms in the host economy (via transactions or alliance-based relationships within or across industries) and consequently influence the output, capability development and productivity of partner firms (Forsgren, Holm, & Johanson, 2005). Linkages, therefore, embody inter-firm transactions, interactions and on-going relationships (UNCTAD, 2006). Their importance, and thus interest from researchers, has grown as global firms increasingly pursue opportunities for specialisation through knowledge development and outsourcing, and as countries reconfigure their institutions and policies to encourage linkages between MNEs and local business partners (Battat et al., 1996, UNCTAD, 2001 and UNCTAD, 2006). Recognition that the intensity of linkages determines the extent of knowledge and technology spillovers to local firms (Driffield, Munday, & Roberts, 2002) has prompted calls by researchers to better assess the developmental potential of linkages (Turok, 1993). In 1980, Lall described inter-firm relationships a ‘murky area’ in the industrial economics literature (Lall, 1980: p. 203). Twenty-five years later, a statement by Meyer that ‘future research ought to prioritise the study of … individual interactions of a multinational firm and a local agent or firm’ (Meyer, 2004: p. 264), suggests this ‘murky’ impasse remains unresolved by international business (IB) researchers. Because the body of literature on MNE linkages is relatively new and to-date has focused on developing economies (Moran et al., 2005 and Santangelo, 2009), international business researchers lack a consistent theoretical foundation that would not only facilitate empirical research but also enhance comparability across studies. This paper's first aim and contribution, therefore, is to clarify and integrate concepts developed to-date with regard to linkages with the view of moving forward with research on linkages in the international business field. Close examination of the work on FDI and host country development reveals emphasis on the subsidiaries themselves, the industries they operate in and national economies. Yet, there seems little by way of elucidation of the attributes of linkages that determine the extent of impact on local firms or agents (see the special issue in International Business Review, 1994). This gap can be attributed to the relatively recent emergence of the body of literature in IB on linkages at a firm-level. Work in this vein is useful but typically focused on manufacturing industries in developing economies where the technology gap between MNEs and local firms tends to be wide, and linkages with suppliers predominate. This scenario not only limits the scope of possible linkages that could be examined but also their developmental potential. Authors suggest that the developmental impacts of MNEs must be a more central concern in the mainstream of IB research (Ghauri & Buckley, 2006). While the literature on spillovers suggest a passive stance on the part of MNEs, IB scholars emphasize the deliberate attempt of MNEs at developing local capabilities (Ghauri & Yamin, 2009); and there is a need to not only consider the means through which MNEs benefit the host economy, but also combine the potential for learning gained from local business interactions in host countries (Yamin, 2005). For this reason, scholars need to adopt a model that emphasizes the benefits to be drawn from linkages creation for foreign subsidiaries as well as for local firms. This paper's second aim and contribution is to balance the emphasis on these dual impacts on (host country) development and organisational learning by the foreign subsidiary. The final impetus for this paper was the authors’ search for a useable and comprehensive model of inter-firm linkages between foreign-owned multinational enterprises (MNEs) and locally based firms in host economies. Indeed, IB scholars have refined their definition of linkages to focus on inter-firm relationships (Hansen, Pedersen, & Petersen, 2009). Following this definition, we integrate concepts drawn from MNE theories and the existing linkages literature from multiple areas. Inter-disciplinary insights help to refine the definition of linkages and to unravel the complexity of linkage intensity, which lead us to develop a comprehensive foreign–local linkages analytical framework. The paper's final contribution is thus developing three linkage constructs that can be employed in future empirical research. The starting point of the paper is to discuss the distinction between linkages and spillovers and refine the definition of inter-firm linkages (and specifically those formed between foreign and local firms) as a developmental mechanism. Then, a review of existing IB research in this area draws out contributions as well as limitations. Shifting the focus to other disciplines suggests there are a number of key insights on the impact of linkages on firm capabilities and resources for international business researchers worth considering for future research. The remainder of the paper integrates these ideas into a framework that can be used to analyse inter-firm linkage attributes at the firm-level.

This paper is in response to repeated calls for further research on foreign–local firm relationships, and in particular, their firm developmental potential (e.g. Meyer, 2004). Although the research to-date has shown much promise, it appears to have reached a critical juncture which can only be addressed through a consistent methodological approach and extension of the scope of the study of linkages. Few studies have adopted a comprehensive approach to capturing all relevant dimensions of inter-firm linkage intensity. This paper has contributed this pursuit by presenting a framework for future analysis of inter-firm linkages. The framework extends previous work by developing three key attributes based on crucial dimensions, and by integrating each of these within the context of either individual or multiple relationships between firms. Business-to-business linkages are defined as supply chain and collaborative relationships which extend beyond simple transactions to overcome the deficiencies of pure-market relationships. A primary reason for their formation is to capture rents from resources such as knowledge. However, our review of existing research found a need for the inclusion of three main attributes in studies of foreign–local firm linkages: quantity, scope and quality. Overemphasis on local sourcing and backward linkages often fails to elucidate the firm-level mechanics underpinning successful exchange and subsequent organisational development. Hence, the paper supplemented the discussion with key insights from other research, focusing predominately on the MNE as an inter-organisational network, the multiplicity of business relationships, knowledge sharing and learning, and relational and personal ties. This highlighted the importance of context, whether at the individual (manager), enterprise or environment level. Our discussion then developed constructs, by considering both unit of analysis in different contexts in conjunction with individual linkage quality, as well as the scope and quality of multiple linkages. Linkage intensity (of either MNE, local firm or both) was the combined influence of all three constructs. There are several implications of these findings for future research particularly that which seeks to explore firm resource and capability development. First, consideration of a complete range of linkages formed is required to capture actual physical resource and knowledge transfer. Second, inclusion of both foreign subsidiary and local firm in dyadic relationships, as well as the complexities of multiple relationships is necessary to fully understand the influence of linkages on firm development. Third, good research will incorporate a longitudinal dimension capturing the changes to these variables over time, and the impacts of interaction and exchange at a specific point in time, and over the life of the linkage. Fourth, from a developmental perspective, capturing the intensity of inter-firm linkages – and therefore their potential for beneficial spillovers – should take priority in future research, rather than types of linkages or within/between industry concerns. Thus, the framework equips researchers with a useful guide for future research in four key ways. It can be applied to the study of upgrading and development in either MNE or local firm. It is able to integrate all attributes of linkages in order to provide a more accurate assessment of the way MNEs interact with local firms in host economies. For instance, until now, emphasis was given to backward linkages with suppliers, at the expense of forward and relational linkages thus underestimating the total direct effect of FDI via inter-firm relationships. It enables empirical studies to delve further into the processes of technology (knowledge) transfer and organisational learning that occur at the level of the firm and to refine research design relating to a wider scope and varying quality of linkages. Use of the extended framework also has implications for policy. If policymakers are able to ascertain which MNEs are most likely to actively participate in linkages with local firms and why, then policy can be better targeted at attracting such firms, and encouraging the formation of linkages with local suppliers, customers as well as other business partners.