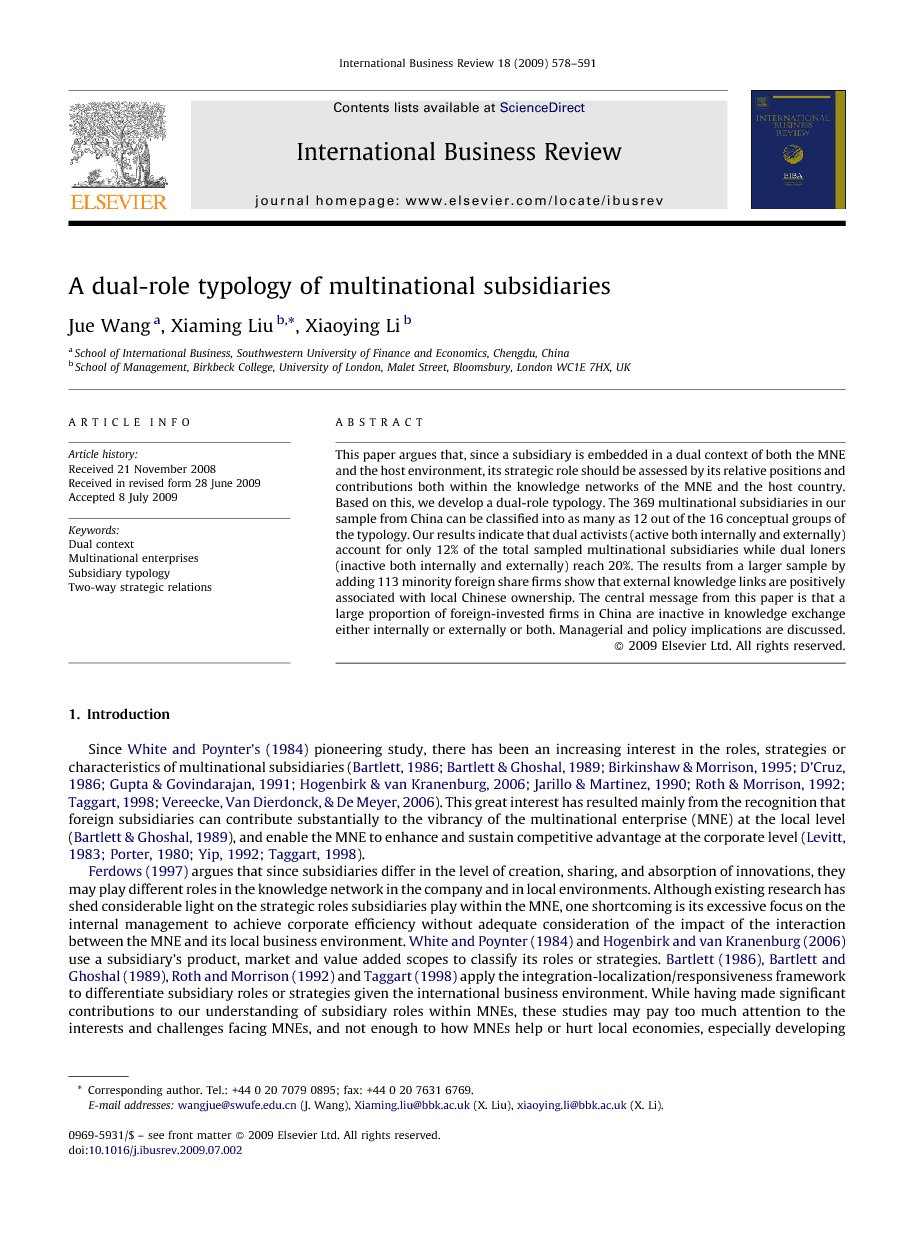 This paper argues that, since a subsidiary is embedded in a dual context of both the MNE and the host environment, its strategic role should be assessed by its relative positions and contributions both within the knowledge networks of the MNE and the host country. Based on this, we develop a dual-role typology. The 369 multinational subsidiaries in our sample from China can be classified into as many as 12 out of the 16 conceptual groups of the typology. Our results indicate that dual activists (active both internally and externally) account for only 12% of the total sampled multinational subsidiaries while dual loners (inactive both internally and externally) reach 20%. The results from a larger sample by adding 113 minority foreign share firms show that external knowledge links are positively associated with local Chinese ownership. The central message from this paper is that a large proportion of foreign-invested firms in China are inactive in knowledge exchange either internally or externally or both. Managerial and policy implications are discussed.

Since White and Poynter's (1984) pioneering study, there has been an increasing interest in the roles, strategies or characteristics of multinational subsidiaries (Bartlett, 1986, Bartlett and Ghoshal, 1989, Birkinshaw and Morrison, 1995, D’Cruz, 1986, Gupta and Govindarajan, 1991, Hogenbirk and van Kranenburg, 2006, Jarillo and Martinez, 1990, Roth and Morrison, 1992, Taggart, 1998 and Vereecke et al., 2006). This great interest has resulted mainly from the recognition that foreign subsidiaries can contribute substantially to the vibrancy of the multinational enterprise (MNE) at the local level (Bartlett & Ghoshal, 1989), and enable the MNE to enhance and sustain competitive advantage at the corporate level (Levitt, 1983, Porter, 1980, Yip, 1992 and Taggart, 1998). Ferdows (1997) argues that since subsidiaries differ in the level of creation, sharing, and absorption of innovations, they may play different roles in the knowledge network in the company and in local environments. Although existing research has shed considerable light on the strategic roles subsidiaries play within the MNE, one shortcoming is its excessive focus on the internal management to achieve corporate efficiency without adequate consideration of the impact of the interaction between the MNE and its local business environment. White and Poynter (1984) and Hogenbirk and van Kranenburg (2006) use a subsidiary's product, market and value added scopes to classify its roles or strategies. Bartlett (1986), Bartlett and Ghoshal (1989), Roth and Morrison (1992) and Taggart (1998) apply the integration-localization/responsiveness framework to differentiate subsidiary roles or strategies given the international business environment. While having made significant contributions to our understanding of subsidiary roles within MNEs, these studies may pay too much attention to the interests and challenges facing MNEs, and not enough to how MNEs help or hurt local economies, especially developing country economies (Meyer, 2004 and Ramamurti, 2004). Given that globalisation has significantly transformed the context in which MNEs operate, an investigation of the role of MNEs in economic development needs to be a central concern in the mainstream international business research (Buckley and Ghauri, 2004 and Ghauri and Yamin, 2009). Gupta and Govindarajan's (1991) study focuses on knowledge flows within the MNE to identify different roles of subsidiaries, but does not analyse knowledge exchange between a subsidiary and its local environment. The current paper proposes a dual-role typology of multinational subsidiaries. This typology is based on the network approach to MNEs (Ghoshal and Bartlett, 1988, Harzing, 1999, Hedlund, 1986 and O’Donnell, 2000). While this approach has recently been adopted to explain knowledge creation and diffusion of MNEs (Andersson et al., 2001 and Andersson et al., 2005), it has not been fully applied to subsidiary typology. Following this approach, an MNE is a network of internationally dispersed units which are simultaneously embedded in two business contexts: the internal networks of the MNE and the external (host country) environment. An MNE may not only adjust to or overcome the differences it encounters at the borders of its various markets, but also exploit these differences for value creation opportunities so that value chains may increasingly span multiple countries (Ghemawat, 2007). In this process of the MNE's global expansion, the roles and/or strategies of its subsidiaries are both shaped by and affect the internal and external networks. A subsidiary's strategic role should be assessed by its relative positions and contributions within the knowledge networks of both the MNE and the host country. This typology extends the study of Gupta and Govindarajan (1991) by considering external as well as internal knowledge flows, and is believed to be useful not only for MNE managers but also for policy makers, especially from host countries. The rest of the paper is organized in the following way. Section 2 reviews the literature on subsidiary roles and strategies, and in Section 3 we present our dual-role typology. Section 4 explains the research methodology. In Section 5, we test the typology on a survey data set of 369 multinational subsidiaries in China and compare the results with those when 113 firms with at least 25% foreign ownership are added to the data set. Finally, Section 6 concludes by summarizing the paper and discussing managerial and policy implications and limitations of this research.

Multinational subsidiaries can play different roles in improving efficiency at both the subsidiary and corporate level and in enhancing local capability development in the host economy. This explains why there has been an increasing interest among researchers in analyzing subsidiary typology. Following a critical assessment of the existing subsidiary typology frameworks, we have developed a dual-role typology based on a network approach to the MNE. This typology considers both the efficiency of multinational subsidiaries and their impact on local development and is believed to be an important extension of Gupta and Govindarajan's (1991) knowledge-based typology. The empirical results from an analysis of 369 multinational subsidiaries in China lend strong support to our new typology as 12 out of 16 conceptual groups have relevant subsidiaries to fix into. The results are compared with those from a larger sample of 482 firms with at least 25 percent foreign ownership. The central message is that a large proportion of foreign-invested firms in China are inactive in knowledge exchange either internally or externally or both. Our results confirm the conclusion of a number of existing empirical studies that the existence and magnitude of knowledge spillovers from FDI depend on a number of factors, including MNEs’ incentives to create and diffuse knowledge and the absorptive capacity of host countries/firms. Our dual-role typology may change the way we think about and study roles or strategies of multinational subsidiaries. As a multinational subsidiary operates in business networks of the MNE and the host economy simultaneously, its role in knowledge flows needs to be assessed in a holistic way by including both its internal and external interactions rather than the former only. For instance, an internal activist may well enhance the competitiveness of the MNE and itself by actively diffusing its own knowledge to and absorbing knowledge from the rest of the MNE. However, this subsidiary's knowledge diffusion ability within the MNE may be higher if it is also an external receptor or activist. To find whether this is the case, we need to examine the subsidiary's external knowledge exchange activities. Furthermore, an internal activist can be an external loner at the same time. In this case, this subsidiary plays little role in knowledge accumulation in the host economy. There are several managerial and policy implications of this study. Firstly, managers of multinational corporations need to integrate their subsidiaries into internal networks of the corporations and encourage them to learn from local business partners to benefit from both sources of knowledge and enhance the competitiveness of the subsidiaries and corporations. Secondly, managers of local firms should also be encouraged to establish networks with MNEs to source knowledge from the subsidiaries. Thirdly, host-country FDI policy may need to be selective, i.e. may need to encourage FDI which is expected to develop extensive linkages with local firms to promote knowledge accumulation in the local economy. The contributions of this paper to our understanding of multinational subsidiary strategies or roles need to be interpreted with caution as there are several important limitations. One such limitation is that the multinational subsidiaries in the sample are located in only three different areas in China. Perhaps an even larger sample with the selection of subsidiaries located in more different areas may allow all 16 conceptual clusters to have relevant cases to fix in. Secondly, to measure a subsidiary's impact on local partners, we used four subjective variables based on the views of subsidiary managers only. This may lead to a biased measurement since subsidiary managers may overestimate their subsidiaries’ positive impact on local partners. Thus, in order to gain a fairer evaluation of subsidiaries’ impact on local partners, the views of related local firms need to be collected. Despite the limitations, the current study should contribute to both theoretical and empirical literature on multinational subsidiary typology.