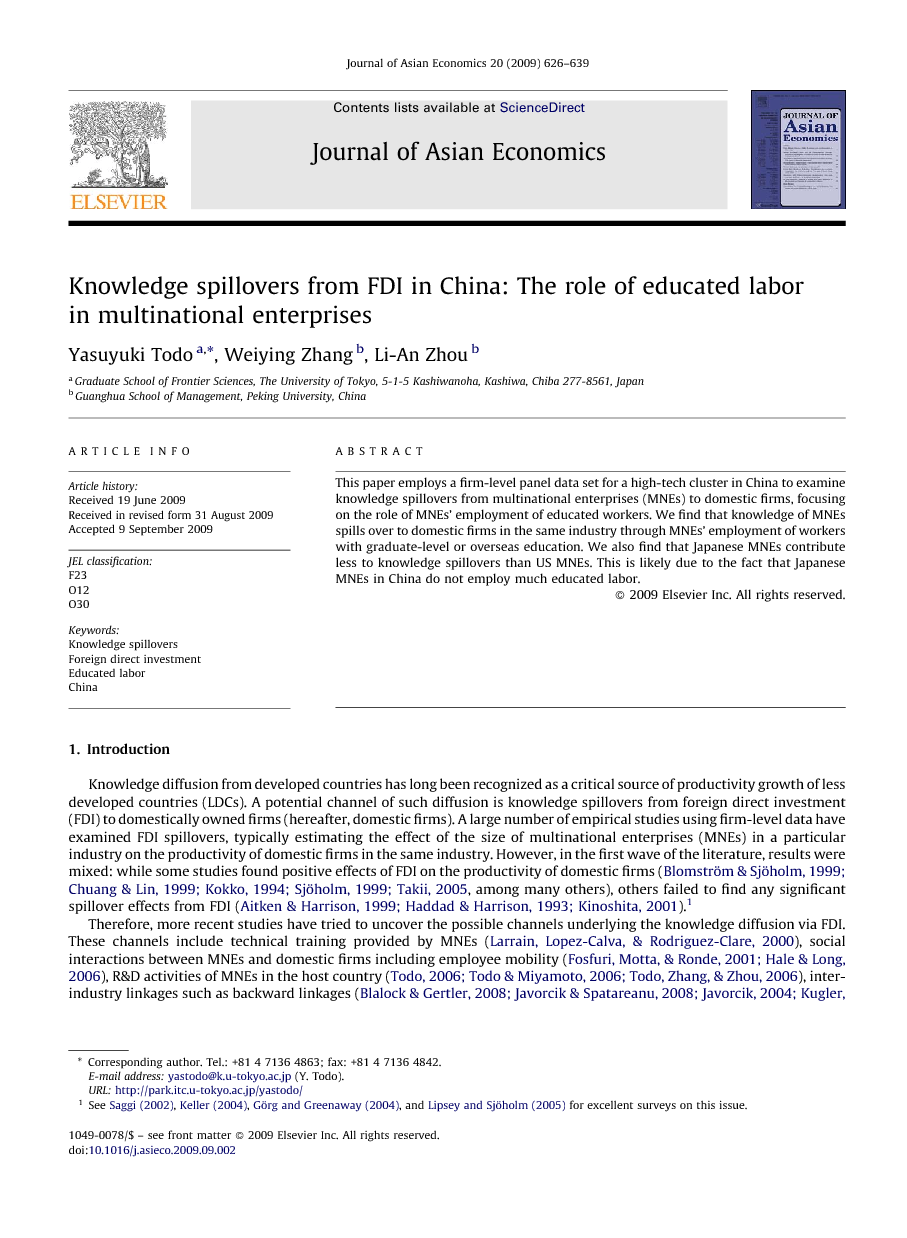 This paper employs a firm-level panel data set for a high-tech cluster in China to examine knowledge spillovers from multinational enterprises (MNEs) to domestic firms, focusing on the role of MNEs’ employment of educated workers. We find that knowledge o

Knowledge diffusion from developed countries has long been recognized as a critical source of productivity growth of less developed countries (LDCs). A potential channel of such diffusion is knowledge spillovers from foreign direct investment (FDI) to domestically owned firms (hereafter, domestic firms). A large number of empirical studies using firm-level data have examined FDI spillovers, typically estimating the effect of the size of multinational enterprises (MNEs) in a particular industry on the productivity of domestic firms in the same industry. However, in the first wave of the literature, results were mixed: while some studies found positive effects of FDI on the productivity of domestic firms (Blomström and Sjöholm, 1999, Chuang and Lin, 1999, Kokko, 1994, Sjöholm, 1999 and Takii, 2005, among many others), others failed to find any significant spillover effects from FDI (Aitken and Harrison, 1999, Haddad and Harrison, 1993 and Kinoshita, 2001).1 Therefore, more recent studies have tried to uncover the possible channels underlying the knowledge diffusion via FDI. These channels include technical training provided by MNEs (Larrain, Lopez-Calva, & Rodriguez-Clare, 2000), social interactions between MNEs and domestic firms including employee mobility (Fosfuri et al., 2001 and Hale and Long, 2006), R&D activities of MNEs in the host country (Todo, 2006, Todo and Miyamoto, 2006 and Todo et al., 2006), inter-industry linkages such as backward linkages (Blalock and Gertler, 2008, Javorcik and Spatareanu, 2008, Javorcik, 2004, Kugler, 2006 and Liu, 2008). Others find that whether or not knowledge spills over from FDI may depend on the technology gap between MNEs and domestic firms as well as the absorptive capacity of domestic firms (Girma, 2005, Girma et al., 2005, Hale and Long, 2006 and Takii, 2005). Following the literature examining more specific channels of FDI spillovers, this study, using firm-level panel data for a Chinese science park, focuses on the role of MNEs’ employment of educated workers in generating knowledge spillover to domestic firms. This focus is based on two important observations. First, according to the field interviews conducted by the authors of this paper in the science park, engineers and managers of MNEs often change their jobs and work for domestic firms or start up their own firms, after they learn advanced knowledge and skills from their experiences in MNEs. These observations suggest that knowledge of MNEs indeed spills over to the local economy particularly through labor mobility of educated workers. Second, a large number of Chinese educated overseas have recently returned to China. According to Zweig (2008), the number of returned students drastically rose from less than 10,000 in 2000 to 25,000 in 2004. The multicultural background and linguistic advantage of the returnees should promote interactions between MNEs and the local economy and hence facilitate knowledge spillovers from MNEs. The science park examined in this study, the Zhongguancun Science Park (hereafter the Z-Park), provides an ideal context for examining MNEs’ employment of educated workers as a source of FDI spillovers. As a cluster of high-technology industries, the Z-Park is known as China's “Silicon Valley” and characterized by the utilization of highly educated workers. Among the total of 400,000 workers in the Z-Park in 2003, 220,000, or more than 50%, had a bachelor's or higher degree, 42,000, more than 10%, had a master's or higher degree, and 3600, about 1%, were educated abroad. The geographical concentration of firms in the park facilitates interpersonal interactions and turnover of those educated workers between MNEs and domestic firms, and thereby stimulates knowledge spillover from MNEs to domestic firms.2 To preview our results, we find that the industry aggregate of MNEs’ total employment has no significant effect on the productivity of domestic firms, concluding that MNEs’ production activities do not unconditionally lead to knowledge spillovers to domestic firms.3 By contrast, the industry aggregate of MNEs’ educated workers, in particular, those with graduate-level or overseas education, has a positive and statistically significant effect on domestic productivity. We interpret this evidence as showing that MNEs’ employment of educated workers results in spillovers from MNEs to domestic firms. In addition, this study examines differences in the size of spillover effects across home countries of FDI, in particular between the two largest home countries in the Z-Park, Japan and the United States. This examination is possible since our firm-level data set contains information on the nationality of major shareholders of each firm, which is rarely available in firm-level data sets. We find that the industry employment of Japanese MNEs does not improve domestic firms’ productivity, while the industry employment of US MNEs positively affects it. We further find that Japanese MNEs employ educated labor substantially less than US MNEs. Therefore, it is likely that the absence of spillovers from Japanese MNEs is due to the small size of educated labor in Japanese MNEs. Contributions of this study are twofold. First, besides several channels of FDI spillovers found in the existing studies mentioned earlier, we find MNEs’ employment of highly educated workers as its additional channel. Second, few existing studies have found that the size of FDI spillovers differs substantially across home countries of FDI. This study suggests that such differences stem from variations in firm characteristics of MNEs, such as the degree of utilization of educated labor, across home countries. The remainder of the paper is organized as follows. Section 2 discusses the econometric procedure employed in the analysis. Section 3 presents the data set and the variables used in the regression, while the results of the estimation are discussed in Section 4. Section 5 concludes.

This paper examines whether or not advanced knowledge of MNEs spills over to domestic firms and if so, under what conditions such spillovers take place, using a firm-level panel data set for a high-tech cluster in China. We are particularly interested in the role of MNEs’ employment of educated workers and possible differences in spillover effects between Japanese and US MNEs. The results from the estimations of this paper lead to the following conclusions. First, knowledge of MNEs in the Z-Park does not unconditionally spill over to domestic firms in the same industry. However, when MNEs employ highly educated workers, such spillovers in fact take place. A possible reason for this finding is that MNEs’ advanced knowledge is in a black box to local workers when MNEs engage in only production activities that require unskilled labor. However, when MNEs engage in advanced activities, such as R&D, using local skilled labor, the black box opens and those educated workers can learn advanced knowledge of MNEs. Then, the advanced knowledge spills over to domestic firms through labor turnovers, startups of new firms, and technological collaboration between MNEs and domestic firms, as suggested in Section 2. In addition, the size of such FDI spillovers is larger in more R&D-intensive industries. Second, we find that Japanese MNEs in the Z-Park contribute less to spillovers to domestic firms than non-Japanese MNEs, including US MNEs. This is likely due to the fact that Japanese MNEs employ educated labor much less than non-Japanese MNEs. China's policies have encouraged foreign firms to establish their R&D centers in China by providing tax incentives, aiming at technology transfer to domestic firms (Long, 2005). The results of the present paper indicate that such policies are successful in acquiring knowledge from FDI, since R&D centers of MNEs hire more local educated workers than their production units and educated workers of MNEs are a channel of knowledge spillovers from FDI. In addition, our results suggest that policies encouraging MNEs’ employment of educated labor may promote development of a high-tech cluster through knowledge diffusion, although a study based on one park also limits the generality of our research results. Finally, we should emphasize a number of limitations of this paper. First, the analysis of the present paper focuses on intra-industry knowledge spillovers. Although FDI may also benefit upstream industries through inter-industry spillovers, or vertical spillovers, as Javorcik (2004), Kugler (2006), Blalock and Gertler (2008), and Liu (2008) find, we generally neglected such vertical spillovers. Therefore, our findings do not rule out the possibility of vertical spillovers from FDI through production activities. Second, our data set allows for only a short panel data which may underestimate the dynamic effect of FDI spillovers. We expect future research which will tackle these limitations.