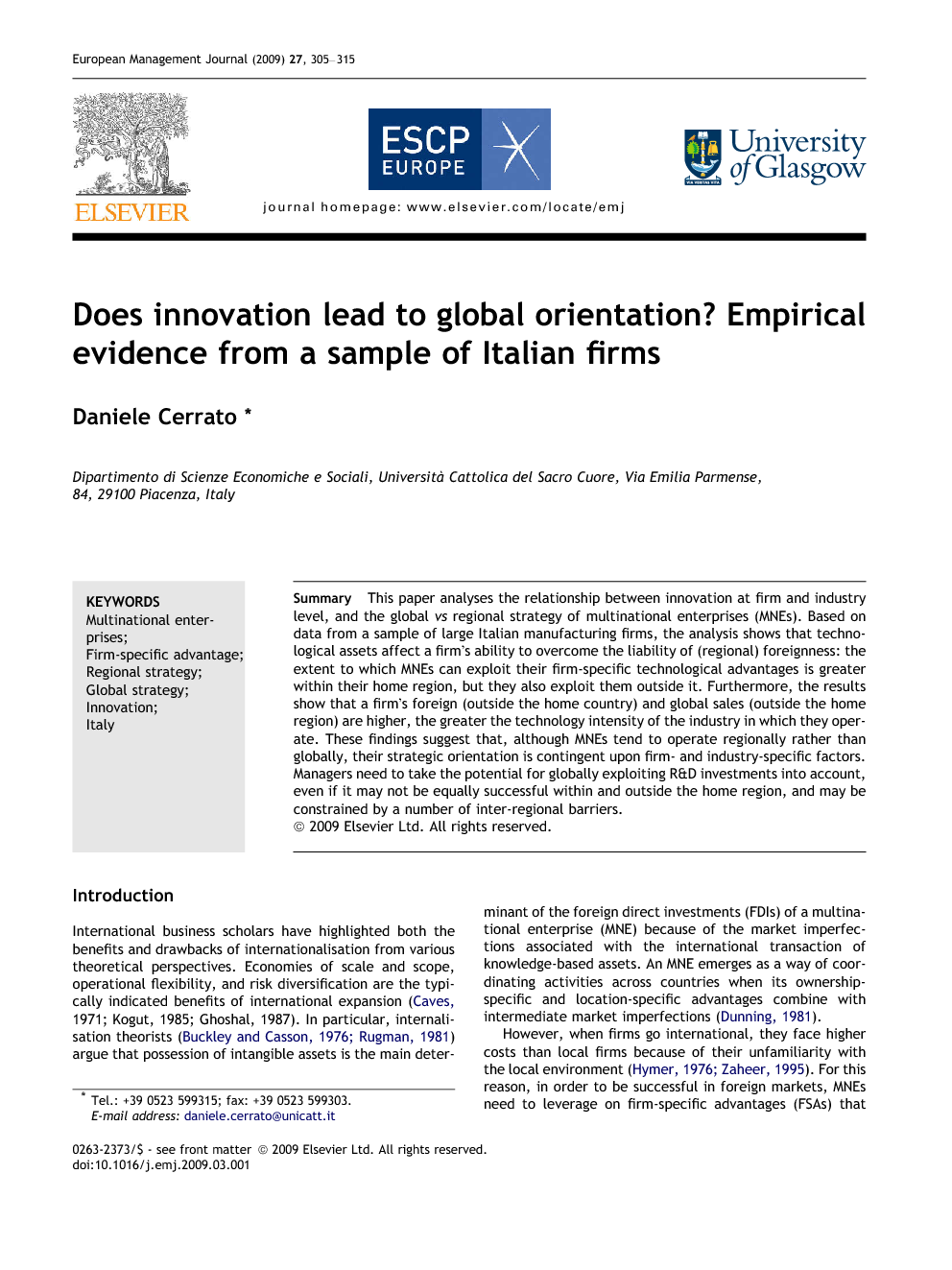 This paper analyses the relationship between innovation at firm and industry level, and the global vs regional strategy of multinational enterprises (MNEs). Based on data from a sample of large Italian manufacturing firms, the analysis shows that technological assets affect a firm’s ability to overcome the liability of (regional) foreignness: the extent to which MNEs can exploit their firm-specific technological advantages is greater within their home region, but they also exploit them outside it. Furthermore, the results show that a firm’s foreign (outside the home country) and global sales (outside the home region) are higher, the greater the technology intensity of the industry in which they operate. These findings suggest that, although MNEs tend to operate regionally rather than globally, their strategic orientation is contingent upon firm- and industry-specific factors. Managers need to take the potential for globally exploiting R&D investments into account, even if it may not be equally successful within and outside the home region, and may be constrained by a number of inter-regional barriers.

International business scholars have highlighted both the benefits and drawbacks of internationalisation from various theoretical perspectives. Economies of scale and scope, operational flexibility, and risk diversification are the typically indicated benefits of international expansion (Caves, 1971, Kogut, 1985 and Ghoshal, 1987). In particular, internalisation theorists (Buckley and Casson, 1976 and Rugman, 1981) argue that possession of intangible assets is the main determinant of the foreign direct investments (FDIs) of a multinational enterprise (MNE) because of the market imperfections associated with the international transaction of knowledge-based assets. An MNE emerges as a way of coordinating activities across countries when its ownership-specific and location-specific advantages combine with intermediate market imperfections (Dunning, 1981). However, when firms go international, they face higher costs than local firms because of their unfamiliarity with the local environment (Hymer, 1976 and Zaheer, 1995). For this reason, in order to be successful in foreign markets, MNEs need to leverage on firm-specific advantages (FSAs) that enable them to overcome the ‘liability of foreignness’. FSAs are related to the set of firm-specific factors that determine a firm’s competitive advantage. An FSA is defined as a ‘uniquecapabilityproprietarytotheorganisation’ ( Collinson and Rugman, 2008: 219). It may be built on the internalisation of an asset over which the firm has a proprietary control, such as product or process technology, managerial capabilities, or marketing or distributional skills. The concept of liability of foreignness, which has traditionally been theorised in the context of entry into a particular country, has recently been rethought at regional level. Empirical evidence shows that most of the world’s largest MNEs are not ‘global’ in the sense of having penetrated foreign markets broadly and deeply across the world (Rugman and Verbeke, 2004), but mainly home region oriented: i.e., the large majority of their sales are made within their own region of the ‘triad’ (North America, European Union and Asia). This suggests that the additional costs of doing business abroad can be much higher when MNEs enter the other regions of the triad and, consequently that the transferability of their FSAs is limited. Rugman and Verbeke (2007) have introduced the concept of home region-bound FSAs to indicate this phenomenon. The building of ‘regional blocs’ has emerged as a general tendency in the world economy. In a broad sense, a region is an area characterised by similarities in culture, customer needs, regulatory environment, and level of social and economic development. Regional strategies seem to be as the most effective responses to cross-border competition (Ghemawat, 2005). They are built on the basic idea that regions are a critical unit of analysis in the formulation and implementation of international strategies. Since the seminal work of Rugman and Verbeke (2004), a number of other studies have addressed the home region bias of MNEs (Delios and Beamish, 2005, Dunning et al., 2007 and Osegowitsch and Sammartino, 2008). However, most research into global/regional strategy has focused on the Fortune500 MNEs, and the current debate on regionalisation could be enriched with analyses of different countries and industries. Furthermore, little is known about the causal relationships between FSAs and a global vs regional strategic orientation. The evidence of a home region bias proves the crucial importance of the transferability of competitive advantages, and calls for further research into the factors affecting a firm’s capability to overcome the liability of regional foreignness and operate globally (Rugman and Verbeke, 2007 and Qian et al., 2008). One key question which deserves further investigation is: what are the main factors affecting a firm’s liability of regional foreignness? In other words, what competitive advantages are more characterised by a non-location-bound nature and allow a more global orientation in terms of sales dispersion? This paper is an attempt to answer such questions and contribute to the regionalisation/globalisation debate in two ways. First of all, using data on a sample of Italian MNEs, it provides new empirical evidence about MNEs’ global vs regional orientation. The logic of regionalisation has not yet been applied to the Italian context, and so, it is interesting to analyse whether Italian MNEs are widely present in global markets, and to what extent. Secondly, this study focuses on one particular FSA – innovation and technological assets – to address the questions: does innovation play a role as a driver of a global strategy at both industry and firm level? Are the firms characterised by greater R&D intensity also characterised by a more global orientation? Is the global or regional orientation of a firm related to the technology intensity of the industry in which it operates?