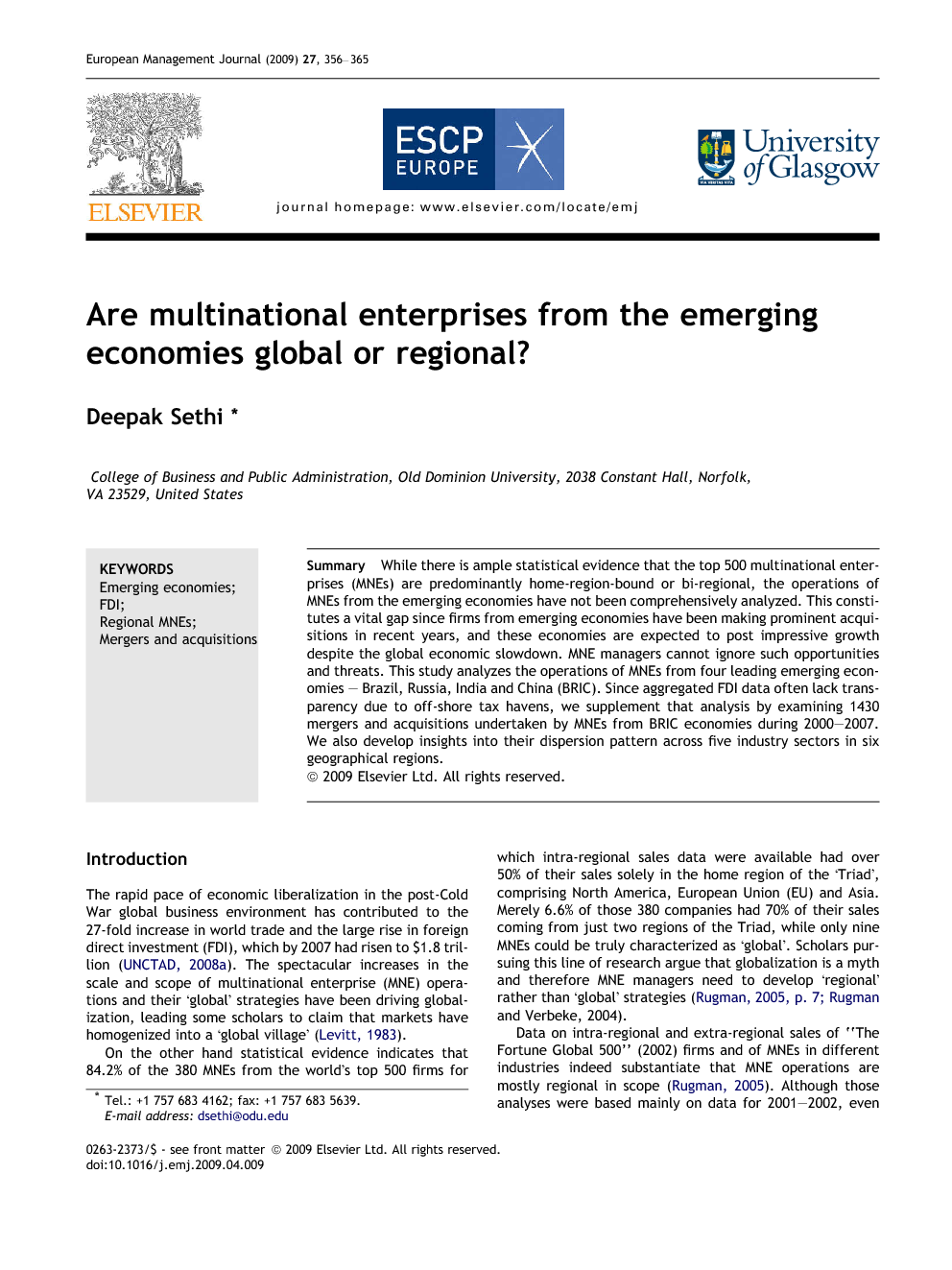 While there is ample statistical evidence that the top 500 multinational enterprises (MNEs) are predominantly home-region-bound or bi-regional, the operations of MNEs from the emerging economies have not been comprehensively analyzed. This constitutes a vital gap since firms from emerging economies have been making prominent acquisitions in recent years, and these economies are expected to post impressive growth despite the global economic slowdown. MNE managers cannot ignore such opportunities and threats. This study analyzes the operations of MNEs from four leading emerging economies – Brazil, Russia, India and China (BRIC). Since aggregated FDI data often lack transparency due to off-shore tax havens, we supplement that analysis by examining 1430 mergers and acquisitions undertaken by MNEs from BRIC economies during 2000–2007. We also develop insights into their dispersion pattern across five industry sectors in six geographical regions.

The rapid pace of economic liberalization in the post-Cold War global business environment has contributed to the 27-fold increase in world trade and the large rise in foreign direct investment (FDI), which by 2007 had risen to $1.8 trillion (UNCTAD, 2008a). The spectacular increases in the scale and scope of multinational enterprise (MNE) operations and their ‘global’ strategies have been driving globalization, leading some scholars to claim that markets have homogenized into a ‘global village’ (Levitt, 1983). On the other hand statistical evidence indicates that 84.2% of the 380 MNEs from the world’s top 500 firms for which intra-regional sales data were available had over 50% of their sales solely in the home region of the ‘Triad’, comprising North America, European Union (EU) and Asia. Merely 6.6% of those 380 companies had 70% of their sales coming from just two regions of the Triad, while only nine MNEs could be truly characterized as ‘global’. Scholars pursuing this line of research argue that globalization is a myth and therefore MNE managers need to develop ‘regional’ rather than ‘global’ strategies (Rugman, 2005 and Rugman and Verbeke, 2004). Data on intra-regional and extra-regional sales of “The Fortune Global 500” (2002) firms and of MNEs in different industries indeed substantiate that MNE operations are mostly regional in scope (Rugman, 2005). Although those analyses were based mainly on data for 2001–2002, even UNCTAD’s latest World Investments Prospects Survey2007–2009 (WIPS) has found that most companies would still prefer their home regions for future international investments, although they would now begin exploring other regions too ( UNCTAD, 2007). The globalization versus regionalization debate has thus far centered on the operations of “The Fortune Global 500” firms. However, over the past two decades Brazil, Russia, India and China (collectively called BRIC) have been registering rapid growth, much higher than other ‘emerging economies’. Further, their aggregated outward FDI now almost equals their FDI inflows (Berman, 2008, Morck et al., 2008 and UNCTAD, 2008). However, although by 2007 “The Fortune Global 500” included 70 ‘emerging economy MNEs’ (EEMs), when Rugman (2005) conducted his seminal study on regionalization in 2000–2001, there were very few. EEMs have also been undertaking extensive mergers and acquisitions (M&As) globally, many even into the developed economies. But do the EEMs have the same strategic motivations and similar spatial dispersion as the ‘developed economy MNEs’ (DEMs)? The operations of DEMs have been researched extensively in the literature and their predominantly regional or bi-regional scope is well established. However, as Supachai Panitchpakdi, Secretary General UNCTAD observes in his foreword to Karl Sauvant’s (2008) book, “The Rise of Transnational Corporations from the Emerging Markets: Threat or Opportunity?” the “second generation of globalization” has not received the analytical or policy attention that it deserves. This leaves a significant gap in the literature since most analysts assert that BRIC economies would continue to grow impressively despite the current worldwide recession. For instance, experts predict that the Chinese economy would post 8–9% growth (down from 11% to 12%), while India’s economy would grow 6–7%, down from 9.2% last year ( IBEF, 2009a and IMF, 2009). Since EEMs are emerging as active players on the global business landscape it is essential for MNE managers to monitor their strategies and geographical scope – not doing so could well result in ceding competitive advantage. This study therefore examines, at the macro-level based on outward FDI and also at the firm-level, whether the operations of EEMs (MNEs from Brazil, Russia, India and China) are home region-biased, bi-regional or global. Apart from the FDI data we analyzed 1430 foreign M&As undertaken by EEMs over the eight year period 2000–2007. This study thus makes a substantive contribution to the globalization versus regionalization literature by developing deeper insights into the outward FDI from Brazil, Russia, India and China. We also study the strategic motivations and dispersion patterns of their foreign M&As country-wise, across five industry sectors. Given the rapid growth of these economies and the ascendency of their MNEs we believe this analysis has great relevance for academics, MNE managements as well as government policy-makers.