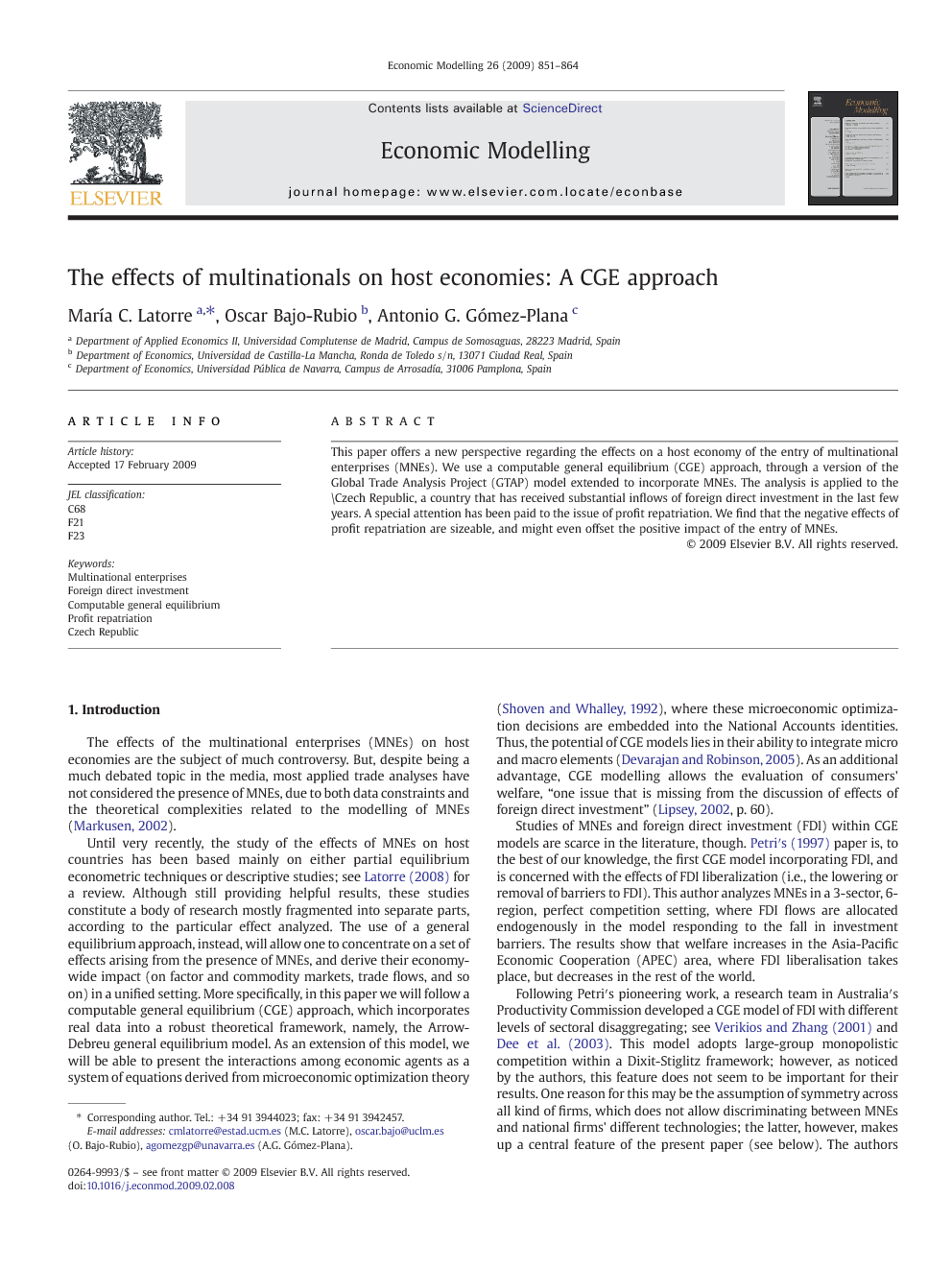 This paper offers a new perspective regarding the effects on a host economy of the entry of multinational enterprises (MNEs). We use a computable general equilibrium (CGE) approach, through a version of the Global Trade Analysis Project (GTAP) model extended to incorporate MNEs. The analysis is applied to the \Czech Republic, a country that has received substantial inflows of foreign direct investment in the last few years. A special attention has been paid to the issue of profit repatriation. We find that the negative effects of profit repatriation are sizeable, and might even offset the positive impact of the entry of MNEs.

In this paper we have analyzed the effects of the entry of MNEs on a particular host economy, the Czech Republic, which has received significant amounts of FDI in the last few years. The empirical methodology has made use of a CGE approach, through a 2-region, 2-factor, 20-sector version of the GTAP model, extended to incorporate MNEs. Unlike previous CGE models, the impact of MNEs has not been approximated through a reduction of the estimated barriers to FDI, but through an increase in the capital stock of the MNEs, which have been assumed to have a different technology as compared to national firms. This approach, on the other hand, proves to be particularly appropriate in the case of transition economies. The simulations have been performed in five particular sectors of the economy (Chemicals, Motor vehicles, Electronics, Trade, and Finance), including both manufacturing and services activities. Finally, a special attention has been also paid to a mostly neglected aspect of the impact of MNEs, namely, profit repatriation. We found a small increase in the aggregate wage, GDP and welfare of the host country, and a fall in the rental rate of capital, following the entry of MNEs in any of the selected sectors; both imports and exports also increased. However, if the extent of profit repatriation was large the fall in the rental rate of capital prevailed over the increase in the aggregate wage, so the effects on GDP and welfare turned to be negative. In particular, GDP would decrease if profit repatriation goes beyond 15% in the case of Motor vehicles; around 50% for Chemicals, Trade, and Finance; and 65% for Electronics. This suggests that profit repatriation would be an important issue when analyzing the economic effects of MNEs, despite being generally overlooked in the available empirical literature. In addition, the results from the simulations show the differential impact of MNEs across sectors, which has two relevant features. On the one hand, our results show that patterns are rather similar across sectors with and without profit repatriation, but the size of the effects is related to the particular sector in which MNEs enter; in particular, the empirical analysis suggests that the most unfavourable results for GDP and welfare are those of Motor vehicles, an information that should be relevant for the policy-maker. On the other hand, the model shows that the sectoral patterns of responses to the shock across sectors are related to the demand side of the model. Although CGE models outperform other economic models in representing complex general equilibrium links, a caveat on data properties and stochastic properties is still in order. Specifically, the model uses a benchmark dataset for a reference year, and it has a deterministic nature; see McKitrick (1998), Kehoe (2005) and Devarajan and Robinson (2005) for an account of the merits and drawbacks of CGE models. The analysis in this paper can be extended in a number of ways. First, recall that the results are applicable to a short and medium term horizon, which is the timing associated to our model. A dynamic model including capital accumulation and productivity effects would be able to derive results applicable to the long term. It is not easy, however, to find out how the appropriate productivity effects should be introduced. The literature has analyzed extensively the possible presence of spillovers of the MNEs activities, which would lead to higher productivity levels for the host country′s local firms. The empirical evidence on these spillovers, however, is at best mixed (Barba Navaretti et al., 2004 and Görg and Greenaway, 2004), which is also true in the case of transition countries (Djankov and Hoekman, 2000 and Damijan et al., 2003). In any event, an interesting simulation could deal with the increase in productivity in national firms and/or MNEs necessary to offset the negative effect of profit repatriation. Also, recall that the model, in its current version, incorporates a simple way of differentiating between national firms and MNEs (and their corresponding “varieties” of products), due to the assumption of sector and type-of-firm capital specificity. Other alternatives such as introducing either Cournot competition or monopolistic competition, as well as relaxing the assumption of full employment, may seem quite appropriate for the analysis of MNEs, and can be implemented along the lines of Bajo-Rubio and Gómez-Plana, 2004 and Bajo-Rubio and Gómez-Plana, 2005. Finally, incorporating recent developments on heterogeneous firms (Helpman et al., 2004), something not included so far into any CGE model of MNEs, could be also of much interest.