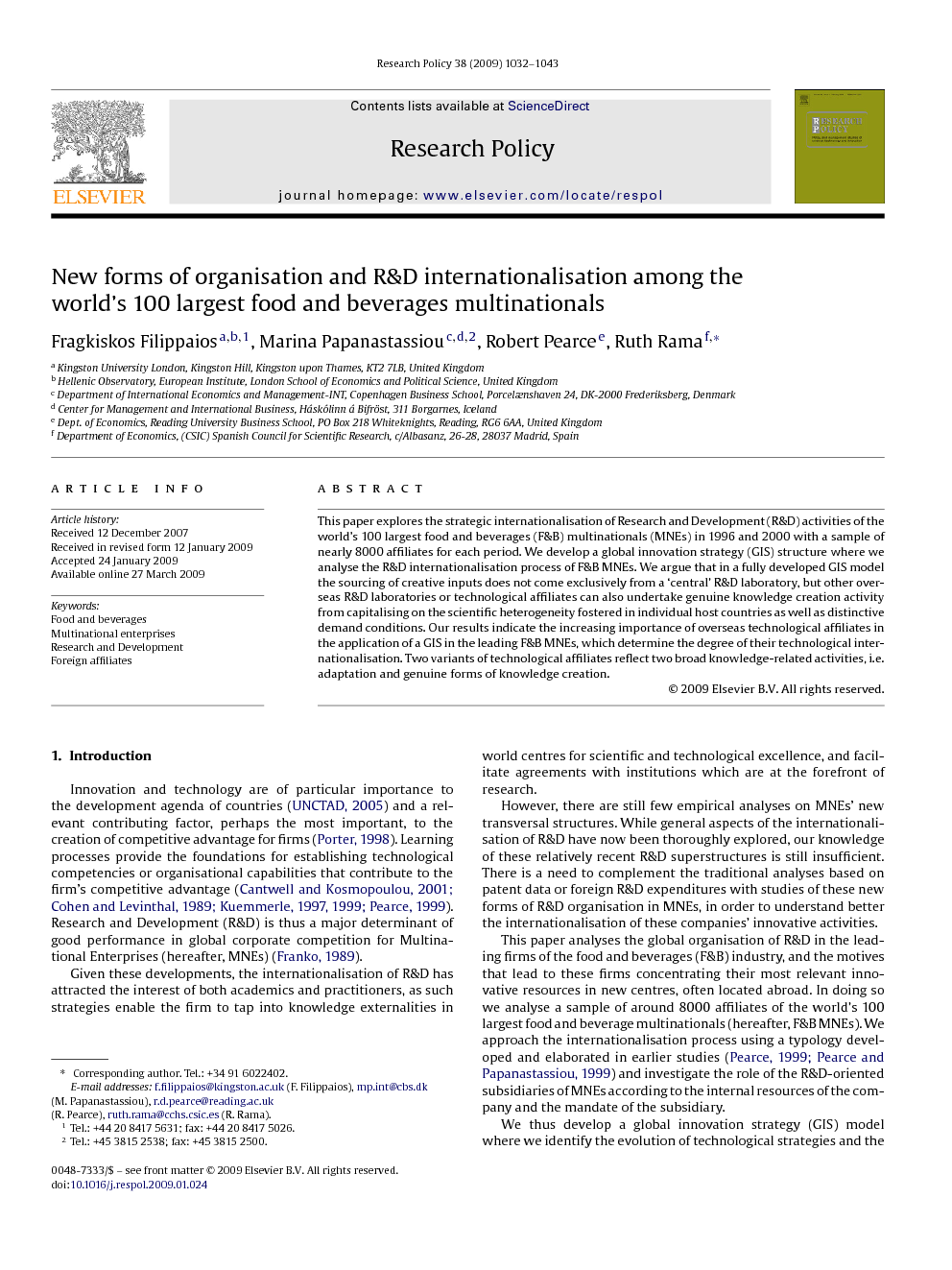 This paper explores the strategic internationalisation of Research and Development (R&D) activities of the world's 100 largest food and beverages (F&B) multinationals (MNEs) in 1996 and 2000 with a sample of nearly 8000 affiliates for each period. We develop a global innovation strategy (GIS) structure where we analyse the R&D internationalisation process of F&B MNEs. We argue that in a fully developed GIS model the sourcing of creative inputs does not come exclusively from a ‘central’ R&D laboratory, but other overseas R&D laboratories or technological affiliates can also undertake genuine knowledge creation activity from capitalising on the scientific heterogeneity fostered in individual host countries as well as distinctive demand conditions. Our results indicate the increasing importance of overseas technological affiliates in the application of a GIS in the leading F&B MNEs, which determine the degree of their technological internationalisation. Two variants of technological affiliates reflect two broad knowledge-related activities, i.e. adaptation and genuine forms of knowledge creation.

Innovation and technology are of particular importance to the development agenda of countries (UNCTAD, 2005) and a relevant contributing factor, perhaps the most important, to the creation of competitive advantage for firms (Porter, 1998). Learning processes provide the foundations for establishing technological competencies or organisational capabilities that contribute to the firm's competitive advantage (Cantwell and Kosmopoulou, 2001, Cohen and Levinthal, 1989, Kuemmerle, 1997, Kuemmerle, 1999 and Pearce, 1999). Research and Development (R&D) is thus a major determinant of good performance in global corporate competition for Multinational Enterprises (hereafter, MNEs) (Franko, 1989). Given these developments, the internationalisation of R&D has attracted the interest of both academics and practitioners, as such strategies enable the firm to tap into knowledge externalities in world centres for scientific and technological excellence, and facilitate agreements with institutions which are at the forefront of research. However, there are still few empirical analyses on MNEs’ new transversal structures. While general aspects of the internationalisation of R&D have now been thoroughly explored, our knowledge of these relatively recent R&D superstructures is still insufficient. There is a need to complement the traditional analyses based on patent data or foreign R&D expenditures with studies of these new forms of R&D organisation in MNEs, in order to understand better the internationalisation of these companies’ innovative activities. This paper analyses the global organisation of R&D in the leading firms of the food and beverages (F&B) industry, and the motives that lead to these firms concentrating their most relevant innovative resources in new centres, often located abroad. In doing so we analyse a sample of around 8000 affiliates of the world's 100 largest food and beverage multinationals (hereafter, F&B MNEs). We approach the internationalisation process using a typology developed and elaborated in earlier studies (Pearce, 1999 and Pearce and Papanastassiou, 1999) and investigate the role of the R&D-oriented subsidiaries of MNEs according to the internal resources of the company and the mandate of the subsidiary. We thus develop a global innovation strategy (GIS) model where we identify the evolution of technological strategies and the critical role of overseas R&D laboratories or technological affiliates in MNEs, which in turn we apply to F&B MNEs. Therefore, our study contributes to the aim of shedding more light on innovation in the so-called low-tech industries, as proposed by recent analyses (von Tunzelmann and Acha, 2005). Second, the majority of previous studies of these forms of global R&D organisation are case studies of small groups of companies. These analyses, in our view, should be complemented with statistical analyses of large samples of similar companies. Third, although the food and beverages (F&B) sector is classified as a low R&D intensity sector (UNCTAD, 2005), F&B MNEs internationalise their R&D activities, according to patent analyses, more than MNEs in most other sectors (Alfranca et al., 2005 and Cantwell and Hodson, 1991). Furthermore, F&B MNEs can be considered as precursor to other MNEs because they are, on average, older and more internationally experienced and more internationalised (Stopford and Dunning, 1983). Their analysis, therefore, could help towards a better understanding of the rationale for the new patterns of R&D internationalisation in other MNEs within a GIS model. The rest of the paper is organised as follows. The next section provides the theoretical foundations and the literature review; Section 3 presents the data and sample description; while Section 4 discusses our empirical methodology and variables. The empirical results and their interpretation are discussed in Section 5. Finally, Section 6 concludes the paper by offering future research questions.

In this paper we have tested the application of a GIS model in a representative sample of the world's top 100 food and beverage multinationals by bringing forward the existence of TAs and furthermore by discerning between two variants of TAs that reflect two broad knowledge-related activities, i.e. adaptation and genuine forms of knowledge creation. Our data show that the most important reason determining the presence of a large number of TAs is the country spread of the MNE. In other words, highly internationalised firms need to organise their R&D activities through specialised affiliates which centralise and direct the innovative activities of the company. Most of these technological affiliates are located in the US, and to a lesser extent in Japan and a few European countries, confirming our arguments on specialised NSIs. Another finding strengthens the idea that MNEs use TAs to coordinate complex R&D networks within the company. MNEs strongly involved in M&A are more likely than other MNEs to launch a TA or increase their number of TAs, a strategy probably aimed at integrating the innovative activities of newly acquired factories. In order to capture the distinction among the various types of TAs, and to further analyse the relationship between the level of internationalisation of the company and the number of its technological affiliates the root node (TA) was split to form two new nodes: the first includes the technological affiliates involved in product adaptation (ADAPT), involving the SL1 and SL2 types of overseas R&D laboratories; the second, the rest of the technological affiliates, are devoted to more creative forms of technological activity, e.g. basic research, etc. (CREATETECH), which include the IIL and LIL types of R&D laboratories. The large number of countries remained as a determining predictor only for the genuine creative overseas R&D units, i.e. CREATETECH. In conclusion, within an MNE a GIS secures access to new knowledge, its operationalisation in new products and the prolonged competitiveness of these products in globalized markets. Future research should focus in more detail on the dimensions of NSI that influence the dynamic evolution of the GIS. In addition, we should look into the organisational challenges that dynamic elements in the form of decentralized knowledge creation of the GIS pose to the MNE.