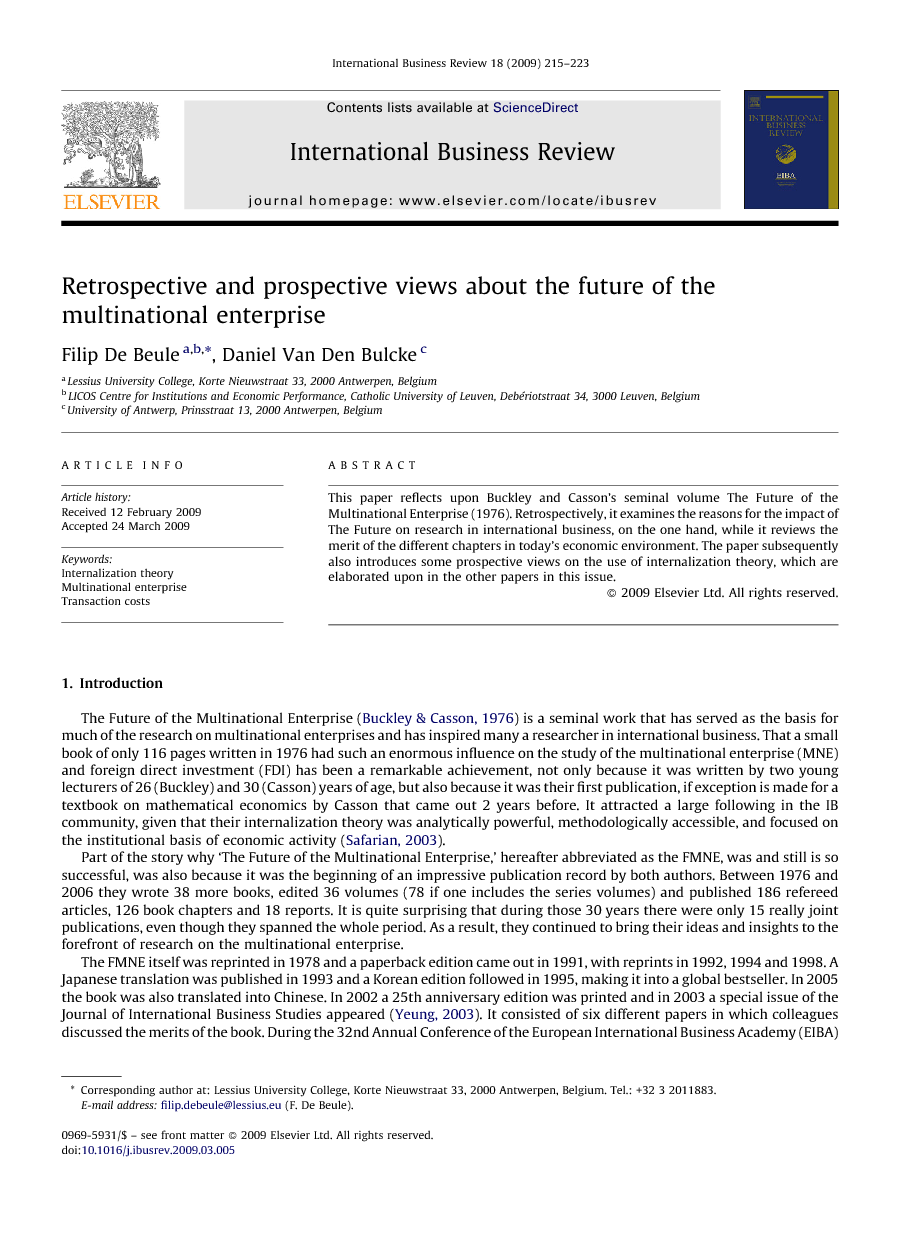 This paper reflects upon Buckley and Casson's seminal volume The Future of the Multinational Enterprise (1976). Retrospectively, it examines the reasons for the impact of The Future on research in international business, on the one hand, while it reviews the merit of the different chapters in today's economic environment. The paper subsequently also introduces some prospective views on the use of internalization theory, which are elaborated upon in the other papers in this issue.

The Future of the Multinational Enterprise (Buckley & Casson, 1976) is a seminal work that has served as the basis for much of the research on multinational enterprises and has inspired many a researcher in international business. That a small book of only 116 pages written in 1976 had such an enormous influence on the study of the multinational enterprise (MNE) and foreign direct investment (FDI) has been a remarkable achievement, not only because it was written by two young lecturers of 26 (Buckley) and 30 (Casson) years of age, but also because it was their first publication, if exception is made for a textbook on mathematical economics by Casson that came out 2 years before. It attracted a large following in the IB community, given that their internalization theory was analytically powerful, methodologically accessible, and focused on the institutional basis of economic activity (Safarian, 2003). Part of the story why ‘The Future of the Multinational Enterprise,’ hereafter abbreviated as the FMNE, was and still is so successful, was also because it was the beginning of an impressive publication record by both authors. Between 1976 and 2006 they wrote 38 more books, edited 36 volumes (78 if one includes the series volumes) and published 186 refereed articles, 126 book chapters and 18 reports. It is quite surprising that during those 30 years there were only 15 really joint publications, even though they spanned the whole period. As a result, they continued to bring their ideas and insights to the forefront of research on the multinational enterprise. The FMNE itself was reprinted in 1978 and a paperback edition came out in 1991, with reprints in 1992, 1994 and 1998. A Japanese translation was published in 1993 and a Korean edition followed in 1995, making it into a global bestseller. In 2005 the book was also translated into Chinese. In 2002 a 25th anniversary edition was printed and in 2003 a special issue of the Journal of International Business Studies appeared (Yeung, 2003). It consisted of six different papers in which colleagues discussed the merits of the book. During the 32nd Annual Conference of the European International Business Academy (EIBA) in Fribourg, Switzerland, a special commemorative session was organized on the occasion of the 30th anniversary of the publication of “The Future of the Multinational Enterprise”. The EIBA session started with an introduction by Daniel Van Den Bulcke and continued with a keynote address by Mark Casson. Together with the authors of the FMNE two other panel members were asked to reflect on the FMNE, i.e. Niron Haishai and Alain Verbeke, while Peter Buckley drew concluding comments before a lively discussion took place. Given the interest shown for the subjects discussed in the session, the presenters were asked to develop their retrospective and prospective views on internalization theory in order to further expand this theme. A brief analysis of the cited references to the FMNE in ISI's Web of Science reveals that it has 588 citations in the social science citation index (SSCI) in a variety of subject areas. The number increases to 623 when one allows the publication year to include reprints such as the 25th anniversary booklet (Buckley & Casson, 2002). Most articles come from business (336) and management (317), but also many researchers in the fields of economics (154), international relations (40) and geography (38) applied the concepts of the book by Buckley and Casson usefully. As a true sign of its status as a long-run theory of the multinational enterprise the number of references to their work has not abated. On the contrary, the number of citations continues to increase – admittedly also as a result of the growth of the social science index – from a level of between 5 and 15 references a year to more than 50 citations in 2008 (see Fig. 1).

Since the middle 1970s when the book ‘The Future of the Multinational Enterprise’ was published by Buckley and Casson, enormous changes in the world economy have occurred. These were to a large extent due to the emergence and the growth of the MNE itself. Not only has the number of multinational parent companies increased fourfold since then, also the scope of their operations in terms of the number of subsidiaries abroad, the number of host countries, the so-called degree of multinationality (e.g. as measured by UNCTAD's transnationality index) and all kinds of strategic alliances have expanded enormously. Also the MNE itself has undergone important changes in its organisational structure as it has often evolved into a more transnational oriented set-up with more responsibilities for the foreign subsidiaries and complex links with suppliers and customers. Moreover the relations with home and host governments have undergone changes as well as with international governmental and non-governmental organizations. The evolving nature of the MNE has kept the interests of the academics who have tried to understand and interpret this most important actor in the global economy. Meanwhile the 1976 book about the Future of the MNE has withstood the effects of time because of its solid and analytical approach. Buckley and Casson applied the transaction cost thinking of Coase (1937) in an international context and succeeded in moving the understanding of the MNE away from an overly stretched orientation towards monopoly power to an emphasis on innovation, knowledge sharing and entrepreneurship thereby contributing to a more positive attitude by policymakers in developed and developing countries. Not only have the authors themselves continued to contribute over the years by their attempts to extend the theory by making it more dynamic and adapting it to the changing nature of the MNE, many other authors continue to rely on the internalization approach for their own theoretical and empirical analyses, as is testified in this issue.