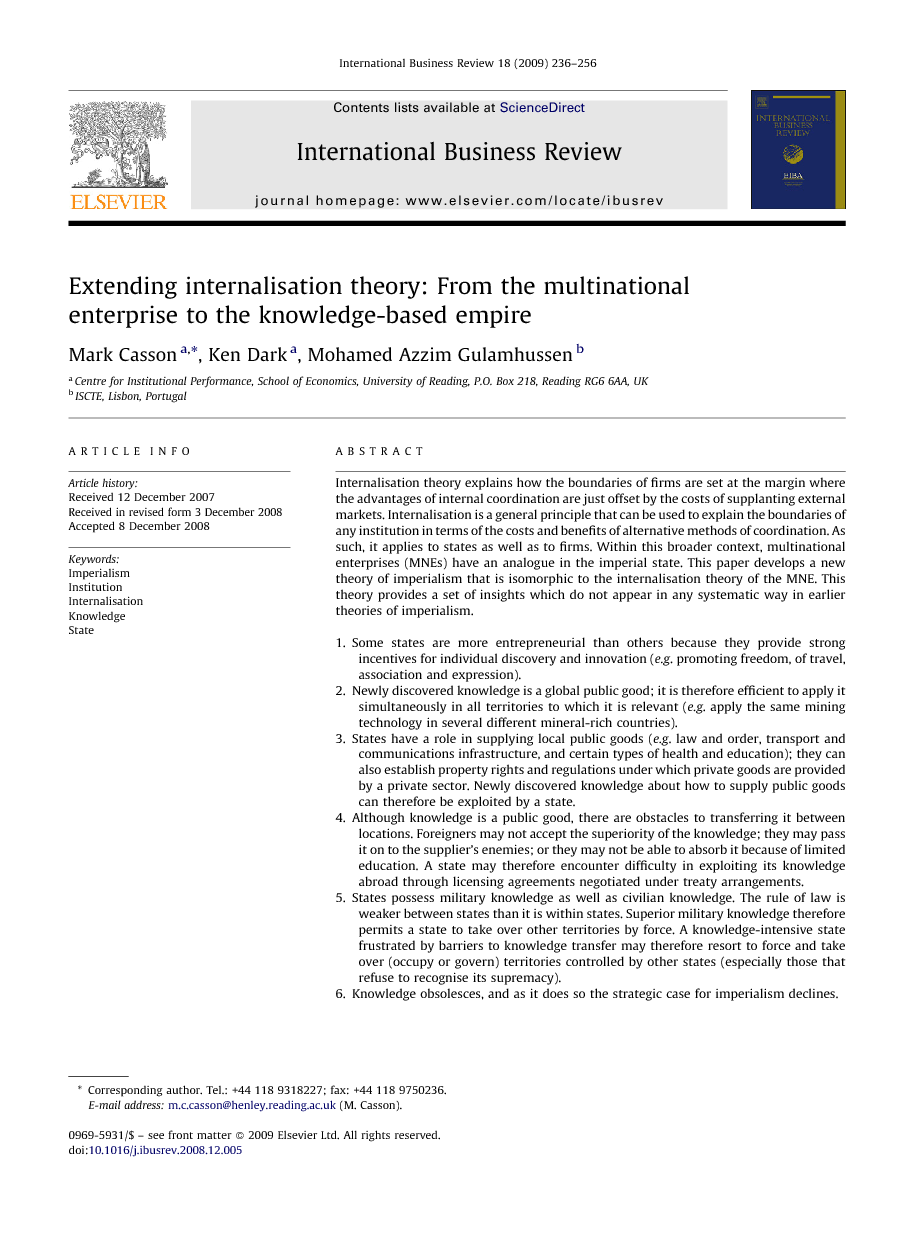 Internalisation theory explains how the boundaries of firms are set at the margin where the advantages of internal coordination are just offset by the costs of supplanting external markets. Internalisation is a general principle that can be used to explain the boundaries of any institution in terms of the costs and benefits of alternative methods of coordination. As such, it applies to states as well as to firms. Within this broader context, multinational enterprises (MNEs) have an analogue in the imperial state. This paper develops a new theory of imperialism that is isomorphic to the internalisation theory of the MNE. This theory provides a set of insights which do not appear in any systematic way in earlier theories of imperialism. 1. Some states are more entrepreneurial than others because they provide strong incentives for individual discovery and innovation (e.g. promoting freedom, of travel, association and expression). 2. Newly discovered knowledge is a global public good; it is therefore efficient to apply it simultaneously in all territories to which it is relevant (e.g. apply the same mining technology in several different mineral-rich countries). 3. States have a role in supplying local public goods (e.g. law and order, transport and communications infrastructure, and certain types of health and education); they can also establish property rights and regulations under which private goods are provided by a private sector. Newly discovered knowledge about how to supply public goods can therefore be exploited by a state. 4. Although knowledge is a public good, there are obstacles to transferring it between locations. Foreigners may not accept the superiority of the knowledge; they may pass it on to the supplier's enemies; or they may not be able to absorb it because of limited education. A state may therefore encounter difficulty in exploiting its knowledge abroad through licensing agreements negotiated under treaty arrangements. 5. States possess military knowledge as well as civilian knowledge. The rule of law is weaker between states than it is within states. Superior military knowledge therefore permits a state to take over other territories by force. A knowledge-intensive state frustrated by barriers to knowledge transfer may therefore resort to force and take over (occupy or govern) territories controlled by other states (especially those that refuse to recognise its supremacy). 6. Knowledge obsolesces, and as it does so the strategic case for imperialism declines. These insights suggest that imperialism is a rational response to a specific set of circumstances. They suggest that in a world where opportunities to discover new knowledge arise continuously, imperialism emerges naturally wherever these circumstances prevail. Obsolescence too is a natural process, and this explains why empires decline. The decline of one empire may generate a gap that some other rising empire may be able to fill. The paper concludes by reviewing a panel of fourteen empires on which the theory can be tested using case study analysis.

This paper has presented a new theory of imperialism which is grounded in the theory of internalisation. It is based on an analogy between a multinational enterprise and an empire, considered as a multinational state. It presents new hypotheses which relate the rise and decline of empires to the development, exploitation and subsequent obsolescence of superior knowledge. Knowledge can be classified as public or private, civilian or military and global or local. There are six main types of knowledge that are particularly relevant to imperialism. A successful imperialist must possess knowledge in all these areas and have superiority in some. Knowledge itself is a global public good. An entrepreneurial nation that believes that it possesses superior knowledge will wish to exploit this knowledge globally. But there are barriers to knowledge transfer which make some methods of exploiting knowledge difficult, e.g. licensing knowledge under treaty arrangements. When knowledge transfer barriers are high there are powerful reasons for ‘internalising’ the exploitation of knowledge within an empire through occupying, and possibly governing, foreign territories. Because knowledge transfer barriers vary according to location and the type of knowledge involved, imperialists may use a mixture of territorial control and treaty arrangements in their global strategy. The theory suggests that a nation with a combination of superior civilian and military knowledge is most likely to resort to territorial control. The nature of the civilian superiority is a key factor in determining the geographical configuration of the empire. The theory is based on economic reasoning, in which imperialists act in a rational way. Entrepreneurial imperialists maximise the economic rewards from superior knowledge subject to the constraints that they perceive. Some of these constraints arise from competition with rival empires. Because imperial competition is not governed by a rule of law, however, the interplay of rational strategies may well lead to wasteful outcomes. In particular, superior civilian knowledge may not be used if it is not possessed by the superior military power. Thus the rationality of individual states does not lead to a collectively rational outcome. This contrasts with competition under the rule of law, as analysed in conventional economics, where military superiority is irrelevant and superior civilian knowledge prevails. A combination of civilian and military superiority has the potential to deliver substantial improvements in local services and quality of life. But while local facilities and infrastructure may be improved, local people may be excluded from some of the benefits. An elitist imperialist may fail to transfer the superior knowledge through education, and as consequence, may resort to job discrimination and residential segregation. Thus economic benefits in terms of certain local public goods – e.g. health – may be offset by costs in terms of other local public goods—in particular, social cohesion. Finally, it should be emphasised that it has not been the purpose of this paper to pass judgement on imperialism. The analysis clearly indicates, however, that imperialism has the potential to generate both significant benefits and significant costs (O’Brien, 1988). The balance of costs and benefits will depend upon the different types of knowledge that are transferred to a territory, the culture of the imperialist, the culture of the local nation, and the geographical characteristics of the territory involved. This paper provides an analytical framework that can be used to address these issues on a systematic comparative basis. It is therefore hoped that this paper will stimulate not only theoretical research but also empirical research—both to test the theory and to assess the relative benefits of cost and empire on a case-by-case basis.