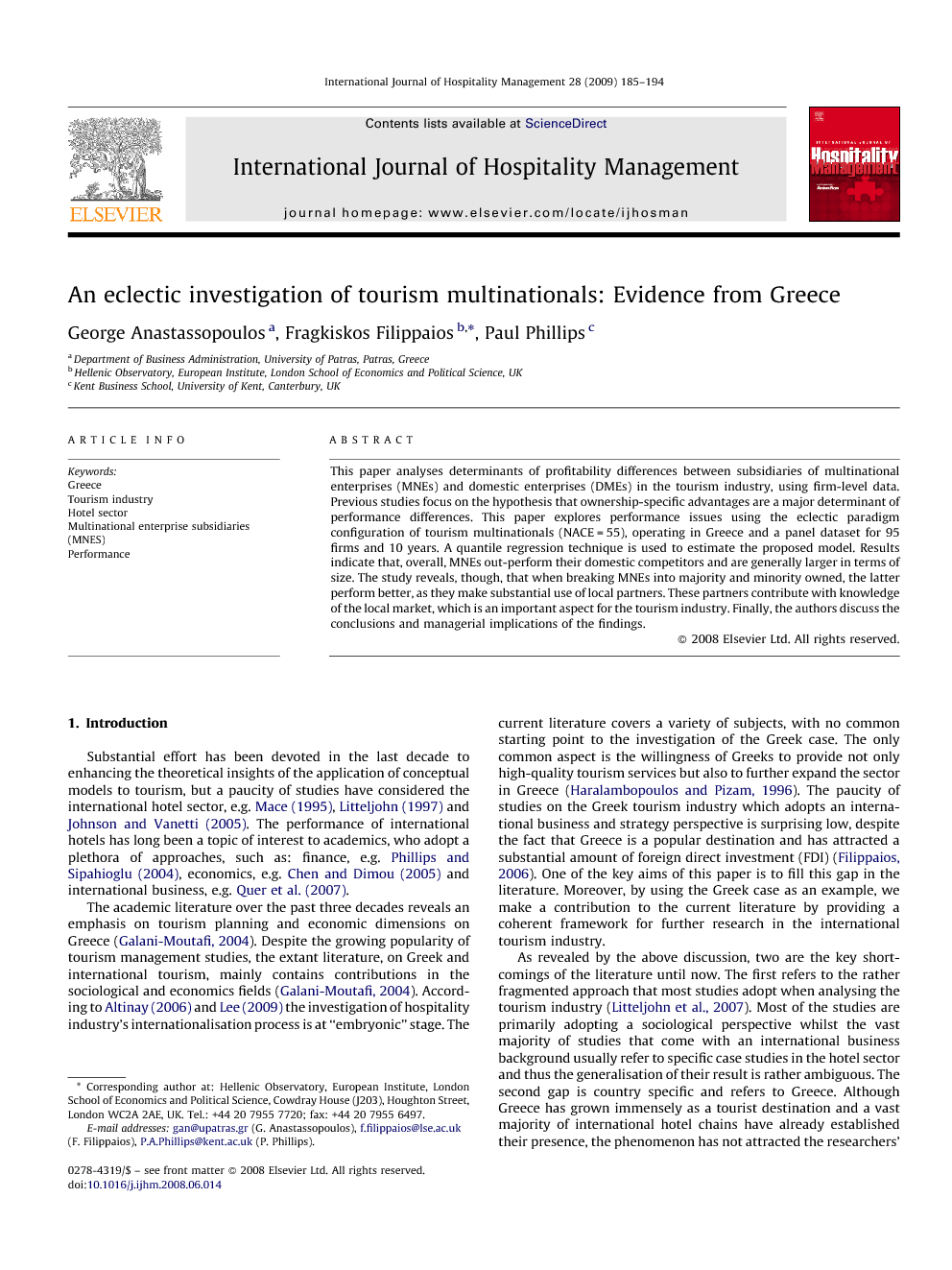 This paper analyses determinants of profitability differences between subsidiaries of multinational enterprises (MNEs) and domestic enterprises (DMEs) in the tourism industry, using firm-level data. Previous studies focus on the hypothesis that ownership-specific advantages are a major determinant of performance differences. This paper explores performance issues using the eclectic paradigm configuration of tourism multinationals (NACE = 55), operating in Greece and a panel dataset for 95 firms and 10 years. A quantile regression technique is used to estimate the proposed model. Results indicate that, overall, MNEs out-perform their domestic competitors and are generally larger in terms of size. The study reveals, though, that when breaking MNEs into majority and minority owned, the latter perform better, as they make substantial use of local partners. These partners contribute with knowledge of the local market, which is an important aspect for the tourism industry. Finally, the authors discuss the conclusions and managerial implications of the findings.

Substantial effort has been devoted in the last decade to enhancing the theoretical insights of the application of conceptual models to tourism, but a paucity of studies have considered the international hotel sector, e.g. Mace (1995), Litteljohn (1997) and Johnson and Vanetti (2005). The performance of international hotels has long been a topic of interest to academics, who adopt a plethora of approaches, such as: finance, e.g. Phillips and Sipahioglu (2004), economics, e.g. Chen and Dimou (2005) and international business, e.g. Quer et al. (2007). The academic literature over the past three decades reveals an emphasis on tourism planning and economic dimensions on Greece (Galani-Moutafi, 2004). Despite the growing popularity of tourism management studies, the extant literature, on Greek and international tourism, mainly contains contributions in the sociological and economics fields (Galani-Moutafi, 2004). According to Altinay (2006) and Lee (2009) the investigation of hospitality industry's internationalisation process is at “embryonic” stage. The current literature covers a variety of subjects, with no common starting point to the investigation of the Greek case. The only common aspect is the willingness of Greeks to provide not only high-quality tourism services but also to further expand the sector in Greece (Haralambopoulos and Pizam, 1996). The paucity of studies on the Greek tourism industry which adopts an international business and strategy perspective is surprising low, despite the fact that Greece is a popular destination and has attracted a substantial amount of foreign direct investment (FDI) (Filippaios, 2006). One of the key aims of this paper is to fill this gap in the literature. Moreover, by using the Greek case as an example, we make a contribution to the current literature by providing a coherent framework for further research in the international tourism industry. As revealed by the above discussion, two are the key shortcomings of the literature until now. The first refers to the rather fragmented approach that most studies adopt when analysing the tourism industry (Litteljohn et al., 2007). Most of the studies are primarily adopting a sociological perspective whilst the vast majority of studies that come with an international business background usually refer to specific case studies in the hotel sector and thus the generalisation of their result is rather ambiguous. The second gap is country specific and refers to Greece. Although Greece has grown immensely as a tourist destination and a vast majority of international hotel chains have already established their presence, the phenomenon has not attracted the researchers’ interest primarily due to data consistency and availability. The case of Greece is interesting for the international literature as it combines as tourism destination a variety of characteristics that not many other countries have. It is a whole year destination with an interesting geographical dimension, i.e. a large amount of islands and coastline. The paper explores performance issues using the eclectic paradigm (Dunning, 2001 and Dunning, 1993) configuration of tourism multinationals operating in Greece. Earlier studies have used this framework to identify the main aspects of internationalisation in the tourism sector (Dunning and Kundu, 1995, Dunning and McQueen, 1982 and Johnson and Vanetti, 2005). Other studies have also used similar frameworks to investigate expansion strategies of international hotel firms (Chen and Dimou, 2005). Finally, there are studies that have used modifications of the eclectic framework to explore multinationals’ entry modes or multinationals’ emergence from countries with similar environments to the Greek one (Melian-Gonzalez and Garcia-Falcon, 2003, Rodriguez, 2002, Williams and Balaz, 2002 and Zhao and Olsen, 1997). This study contributes in the literature in two ways. First of all it builds a conceptual framework that can be used to investigate the tourism industry's performance in other contexts, outside the Greek one. It does so by integrating various aspects of the international business and services literature in an eclectic way. We shift the focus from the mother company to the subsidiary level and do not investigate the impact of internationalisation on performance but the effect of multinational ownership structure on the subsidiaries’ performance. To that respect this study is unique in the current literature. The second key contribution has to do with the specific investigation of the Greek case. This study goes beyond the current approaches and provides quantitative evidence on the situation in the Greek market. This paper advances the literature by analysing the determinants of profitability differences between subsidiaries of multinational enterprises (MNEs) and domestic enterprises (DMEs) in the tourism industry using firm-level data. Previous studies have tested the hypothesis that ownership-specific advantages are a major determinant of performance differences. This study focuses on the hotel sector (NACE = 55) in Greece, using a panel data set for 95 firms over 10 years. The model is estimated using a quantile regression technique as the dependent variable, in our case profitability, and shows a significant skewness. The results indicate that the determinants of profitability differ between MNEs subsidiaries and DMEs. The rest of the paper is organised as follows: Next section provides a description of the international tourism industry and places Greece within the international context. Section 3 presents the conceptual framework and our hypotheses. Section 4 describes the sample and some basic statistics, whilst Section 5 discusses the econometric estimation technique. In Section 6 we provide an interpretation of the results. Finally, Section 7 concludes with some managerial implications, policy recommendations and Section 8 presents the study's limitations and some interesting suggestions for further research.

This study offers a first step towards the investigation of performance determinants in the tourism industry in Greece. In an industry where the key characteristics of the product are determined by the capabilities of the corporation to offer services of a good quality by mobilising all available resources in specific locations, evidence on the effect of multinational ownership on performance are still scarce. Multinationals are the key international players in transferring technology, know-how, new production and human resource management methods. Whilst the vast majority of studies, until now, investigate the effect of internationalisation on performance from a mother company perspective, this paper investigates the mirror effect of multinational ownership participation on the performance of the subsidiary. An eclectic approach of multinationality was used to explain differences in profitability and performance between domestic and multinational firms. This approach brings together different aspects of internationalisation theories and despite the fact that it is somehow dated is still one of the most influential frameworks in international business (Dunning, 2001). A key advantage of this approach is its interdisciplinary flexibility (Guisinger, 2001). We investigate our sample in two steps. The first step offers some preliminary statistics, whilst the key differences in the characteristics of MNEs vs. domestic companies are examined using t-tests. Our results show that domestic companies on average do not differ in terms of performance with the multinationals’ subsidiaries operating in Greece. Domestic companies show an average performance of 2.93% whilst subsidiaries in total a 3.20%. This result is different though when one splits the subsidiaries to majority and minority owned. The first under-perform their local competitors by almost 0.5% achieving 2.31% and the latter over perform domestic subsidiaries by almost 1.5% achieving a 4.65% in gross profits over turnover. Overall, multinationals’ subsidiaries are larger but only due to the effect of minority owned which are on average twice the size of domestic companies. When turning to our econometric exercise, our results indicate that, overall, MNEs outperform their domestic competitors and are generally larger in terms of size. An interesting aspect is revealed though, when we break our MNEs to majority and minority owned. Minority owned MNEs perform better as they make substantial use of local partners who bring into the corporation knowledge of the local market, an aspect important for an industry as tourism. These companies, at the same time, can benefit from all the characteristics of being part of an established international hotel network. Linkages with international hotel operators, a global clientele and transfer of managerial and advertisement standards can really benefit the performance of those companies. To this respect our study confirms the results obtained by Altinay (2007) who finds that although an ethnocentric approach to international expansion provides all the necessary conditions for an organisation's expansion and development, managers should be conscious of socio-cultural barriers. These socio-cultural barriers are better addressed through the existence of a local partner. This finding can have important managerial implications for MNEs investing or looking to invest in countries with similar characteristics to Greece or more importantly to sectors with similar characteristics to the hotels one. The study addresses, to this respect, one key point raised by Litteljohn et al. (2007) who state that the international hotel management literature still provides mixed evidence on the nature of hotel management with respect to modal choice of entry. The quality of the product in this sector is primarily influenced by the interaction between the local customer and the supplier (Archer, 1987). Whilst MNEs can transfer management, marketing, human resource and organisation practices that can enhance the quality of the offered service, a substantial part of the service's quality is determined by the effective and efficient use of the local advantages (Akbaba, 2006, Anastassopoulos and Patsouratis, 2004 and Burgess et al., 1995). Allowing a local partner to contribute, towards this purpose, can substantially influence and improve the MNE's performance and profitability. The local partner's participation though has to be of a certain modal choice (Litteljohn et al., 2007), i.e. having a majority ownership share that will allow managing effectively on the knowledge base offered by the multinational partner. Managers of MNEs thus, when making investment decisions should actively look out for those local partners that could offer this kind of expertise. On the other hand from a local manager's perspective establishing a partnership with an MNE is beneficial as the local firm would be part of a network of operations where knowledge and other information flows could create new opportunities. The paper though has another dimension that goes beyond the managerial implications. It can provide a useful insight to policy makers for developing specific sectors that could lead to creation of competitiveness for the local industry and as a consequence to the country as a whole (Galani-Moutafi, 2004). The development of sectors such as tourism, that build on comparative and competitive advantages of small countries such as Greece is the only way forward for a successful and sustainable development (Haralambopoulos and Pizam, 1996). It is in this case where policy makers should create the necessary conditions to bring together large global players as MNEs and local players. Their interaction would ensure that the exploitation and the augmentation of the local comparative and competitive advantages would be beneficial not only for the local firms but also for the economy as a whole.