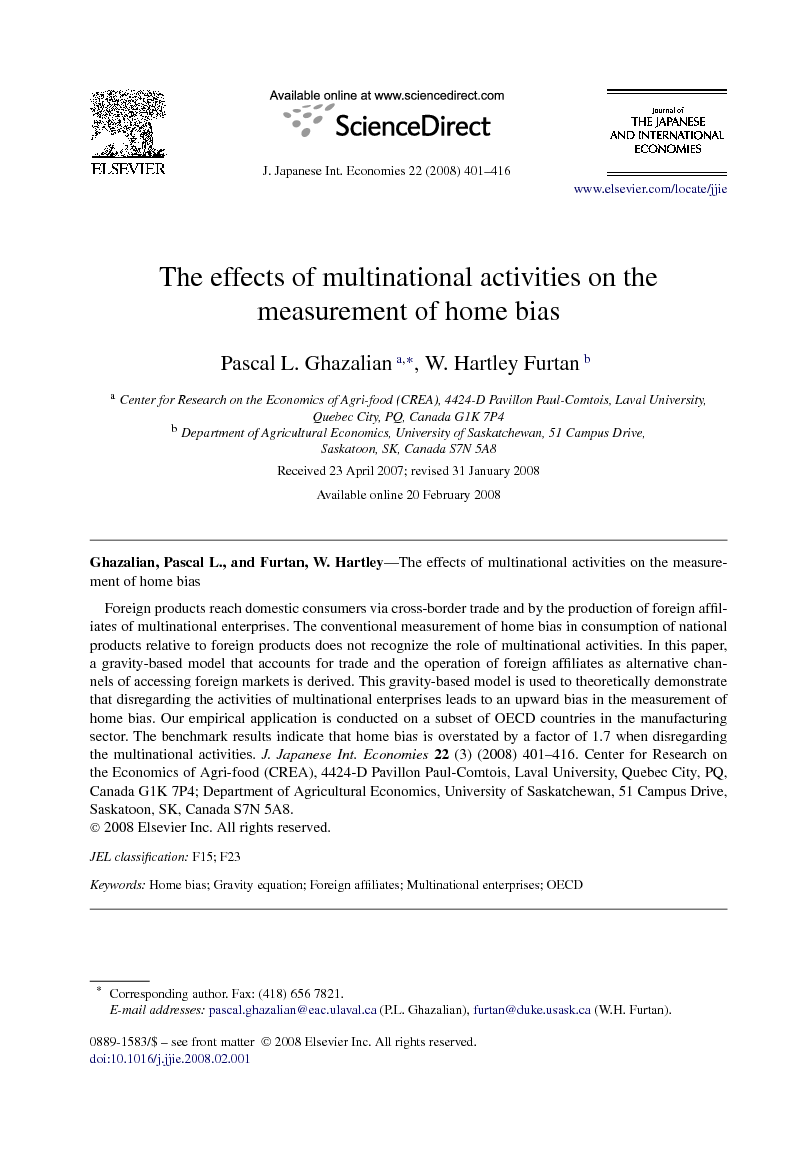 Foreign products reach domestic consumers via cross-border trade and by the production of foreign affiliates of multinational enterprises. The conventional measurement of home bias in consumption of national products relative to foreign products does not recognize the role of multinational activities. In this paper, a gravity-based model that accounts for trade and the operation of foreign affiliates as alternative channels of accessing foreign markets is derived. This gravity-based model is used to theoretically demonstrate that disregarding the activities of multinational enterprises leads to an upward bias in the measurement of home bias. Our empirical application is conducted on a subset of OECD countries in the manufacturing sector. The benchmark results indicate that home bias is overstated by a factor of 1.7 when disregarding the multinational activities. J. Japanese Int. Economies22 (3) (2008) 401–416.

Home bias is an assessment of the consumption bias toward national products relative to foreign products. Foreign products are channeled to domestic consumers via cross-border trade, but also via the production of foreign affiliates of multinational enterprises. This fact is disregarded in the conventional measurement of home bias. This paper derives a gravity-based model that accounts for trade and the operation of foreign affiliates of multinational enterprises as alternative channels of accessing foreign markets. This gravity-based model is exploited to theoretically demonstrate the overstatement of home bias when conventionally assessing its magnitude. The benchmark empirical application, conducted on a subset of OECD countries in the manufacturing sector, shows that not recognizing the multinational activities leads to an overstated home bias by a factor of 1.7. It is important to note that more detailed datasets on the activities of foreign affiliates are required for improved estimates of home bias. Due to data limitations, this study did not account for domestic products that are imported from affiliates abroad. In other words, imported national products were treated as foreign products. Consequently, the estimate of home bias is most likely downward biased. One follow-up study to this paper is to evaluate home bias at disaggregated industrial levels and to apply a generalized theoretical framework that describes the decision mechanism on the mode of accessing foreign markets, as in Helpman et al. (2004). The major limitation of empirical applications of gravity-based models that account for multinational activities remains, however, the availability of, and accessibility to data sets covering the transactions of foreign affiliates.