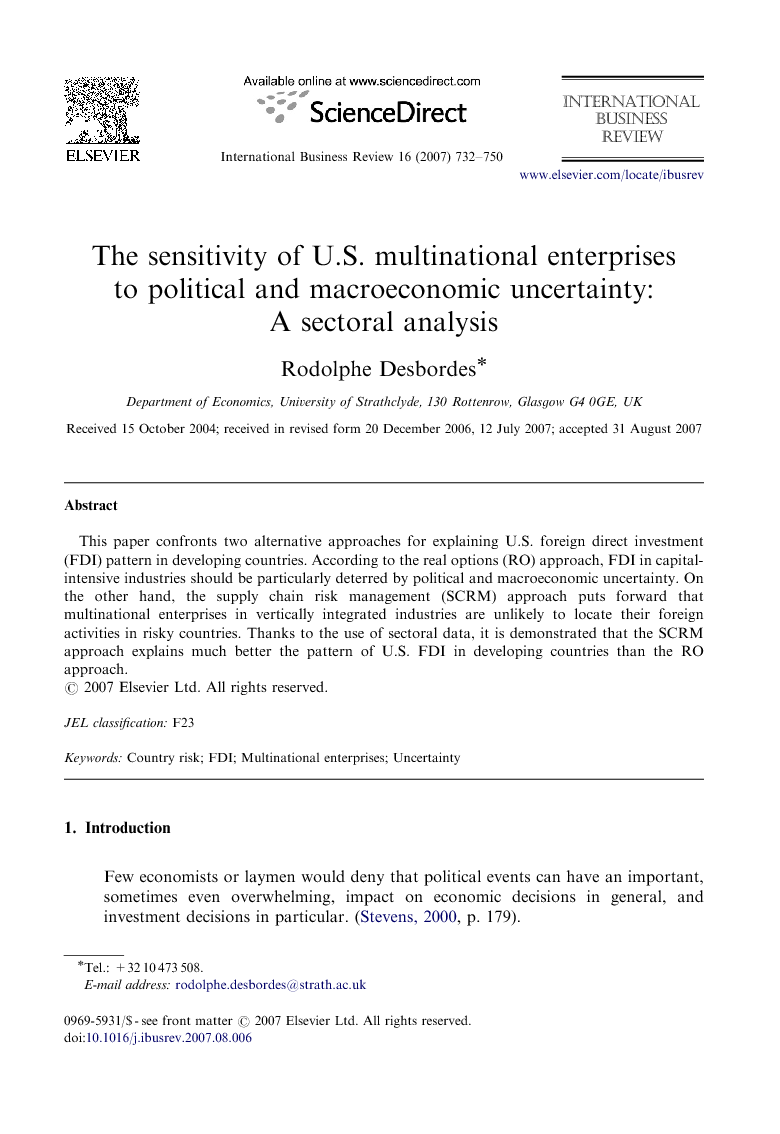 This paper confronts two alternative approaches for explaining U.S. foreign direct investment (FDI) pattern in developing countries. According to the real options (RO) approach, FDI in capital-intensive industries should be particularly deterred by political and macroeconomic uncertainty. On the other hand, the supply chain risk management (SCRM) approach puts forward that multinational enterprises in vertically integrated industries are unlikely to locate their foreign activities in risky countries. Thanks to the use of sectoral data, it is demonstrated that the SCRM approach explains much better the pattern of U.S. FDI in developing countries than the RO approach.

Many studies have put forward the strong negative impact of political risk and, to a lesser extent, of macroeconomic uncertainty, on aggregate foreign direct investment (FDI) in developing countries.1 At the disaggregated level, the evidence seems to be less clear-cut; Wheeler and Mody (1992) and Raff and Srinivasan (1998) do not find that FDI in the U.S. electronic industry is deterred by politically related uncertainty and Campa (1994) fails to uncover a link between capacity expansions by multinationals in the chemical industry and macroeconomic uncertainty. In Aizenman and Marion (2004), supply-side macroeconomic uncertainty exerts no impact on horizontal FDI but strongly influences the location of vertical FDI. These mixed results suggest that the impact of political and macroeconomic uncertainty on FDI is largely governed by industry-specific characteristics. This paper contributes to the literature by confronting two alternative approaches for explaining U.S. FDI pattern in developing countries. According to the real options (RO) approach, FDI in capital-intensive (CI) industries should be particularly deterred by political and macroeconomic uncertainty. On the other hand, the supply chain risk management (SCRM) approach puts forward that multinational enterprises (MNEs) in vertically integrated (VI) industries are unlikely to locate their foreign activities in risky countries. Thanks to the use of sectoral data, available for 19 developing countries over the 1984–1996 period, it is demonstrated that the SCRM approach explains much better the pattern of U.S. FDI in developing countries than the RO approach. Whereas fragmentation of the production process makes an MNE highly vulnerable to international supply chain disruptions, replication of identical production facilities provides “operational flexibility” (Kogut, 1985b), by reducing the risk exposure of an MNE confronted to political or economic uncertainty. Hence, not all organisational forms of multinationality generate an instrument hedge against risk and the impact of country-specific uncertainty on the investment of an MNE cannot be assessed without knowing beforehand the global strategy of the firm. This paper is organised as follows. Section 2 reviews two alternative approaches for explaining the impact of uncertainty on FDI; they both underline that the sensitivity of FDI to uncertainty is industry specific, though for different reasons. Section 3 presents the model specification and data used to confront these two theories. In Section 4, empirical results are given. Section 5 provides a discussion of the results by highlighting that the manufacturing presence of U.S. MNEs in the developing world is largely shaped by industry-specific characteristics. Section 6 concludes and puts forward two implications for managers.

The impact of political and macroeconomic uncertainty on U.S. FDI pattern has been investigated, by trying to discriminate between alternative theoretical explanations. It is found that U.S. MNEs in VI industries are much more sensitive to uncertainty than U.S. MNEs in other industries, including CI industries. Through their location in relatively safe countries, they attempt to minimise the disruptions that political or macroeconomic uncertainty may trigger in their international supply chain. Conversely to fragmentation, replication of production facilities across countries provides MNEs with a multinationality-induced hedge instrument against risk, which reduce their exposure to country-specific uncertainty. This study carries out two implications for managers. First, the fact that market-seeking FDI, i.e. FDI in non-VI industries, is not deterred by political and macroeconomic uncertainty, suggests that geographic diversification is a successful risk-reducing strategy. Even when full fragmentation or concentration of the production process appears, at first glance, the cheapest strategy, building several plants and holding excess capacity may provide arbitrage opportunities which far outweigh the additional costs generated by this replication strategy (Janeba, 2000 and Kogut, 1985b). In other words, the cost-effectiveness analysis needs to be dynamic rather than static, and should acknowledge that the profitability of geographically distinct foreign affiliates is likely to be interconnected. However, these arbitrage opportunities can only occur if the MNE is prepared to deal with contingencies. Hence, the second implication is that managers must ensure that the options generated by multinationality are not drastically reduced by the absence of the organisational structure necessary to the coordination of various international activities (Kogut, 1985b and Kogut, 1989). For instance, Rangan (1998) finds that MNEs, facing significant exchange rate changes in the eighties, did not appear to fully exploit the benefits of operational flexibility, certainly thanks to a lack of planning, inertia, low circulation of information or internal opportunism triggered by inadequate human resource management. More worryingly, Pahud de Mortanges and Allers (1996) and Oetzel (2005) report that managers of MNEs, both at the headquarter and subsidiary levels, do not pro-actively manage risk, as they do not engage in risk assessment or management on an ongoing basis and such despite having already been confronted to economic and political risk. Within the context of rising globalisation of productive activities, managers should then make the necessary organisational adjustments since the speed of a firm's response to political or economic events across the world may nowadays strongly determine its ability to preserve or expand its market position.