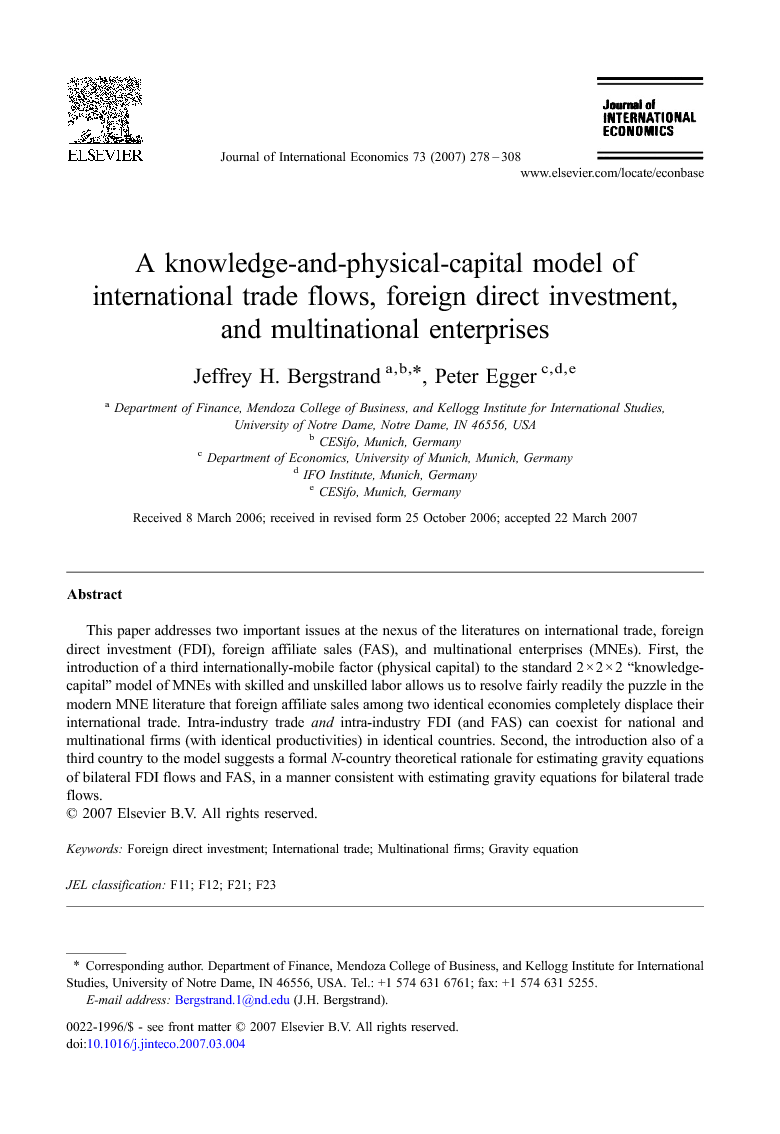 This paper addresses two important issues at the nexus of the literatures on international trade, foreign direct investment (FDI), foreign affiliate sales (FAS), and multinational enterprises (MNEs). First, the introduction of a third internationally-mobile factor (physical capital) to the standard 2 × 2 × 2 “knowledge-capital” model of MNEs with skilled and unskilled labor allows us to resolve fairly readily the puzzle in the modern MNE literature that foreign affiliate sales among two identical economies completely displace their international trade. Intra-industry trade and intra-industry FDI (and FAS) can coexist for national and multinational firms (with identical productivities) in identical countries. Second, the introduction also of a third country to the model suggests a formal N-country theoretical rationale for estimating gravity equations of bilateral FDI flows and FAS, in a manner consistent with estimating gravity equations for bilateral trade flows.

This paper addresses two important issues at the nexus of the literatures on international trade, foreign direct investment (FDI), foreign affiliate sales (FAS), and multinational enterprises (MNEs). First, the modern 2 × 2 × 2 general equilibrium theory of MNEs synthesized in Markusen (2002) implies that – in two countries with identical absolute and relative factor-endowments (other things equal) – horizontal MNEs' foreign affiliate sales displace completely national firms (with identical productivities) and trade between the two countries. However, the European Union and the United States, for instance, have both the largest intra-industry bilateral foreign direct investment flows (and FAS) and intra-industry trade flows. This is a puzzle. Second, while multi-country theoretical foundations for the trade gravity equation are now well established (cf., Anderson and van Wincoop, 2004, and Feenstra, 2004, ch. 5, for overviews), there have been virtually no formal N-country (N > 2) theoretical frameworks provided in international economics for estimating gravity equations of aggregate bilateral FDI, despite numerous empirical studies over the past decade using the gravity equation to explain such flows. 1 Blonigen et al. (in press) note that the “gravity model is arguably the most widely used empirical specification for FDI” (p. 8). Yet the typical rationale for applying the gravity equation to bilateral FDI is by analogy to the trade gravity equation, cf., Mutti and Grubert (2004, p. 339) and Blonigen (2005, p. 21). This suggests a puzzle similar to one posed 30 years ago for trade: The gravity equation explains bilateral FDI empirically quite well… but why? We suggest a simple, integrated solution to both puzzles. First, the introduction of a third factor – physical capital – to Markusen's two-factor “knowledge-capital” model with only skilled and unskilled labor, combined with the assumption that headquarters (plant) setups require human (physical) capital, implies that national exporting enterprises (NEs) can coexist with horizontal MNEs (HMNEs) in pairs of countries with identical relative and absolute factor-endowments (and all firms sharing identical technologies). With skilled labor not being the only factor used to setup both plants and firms, skilled labor is not completely displaced from plant setups to firm setups as two countries' GDPs converge in size. In the 2 × 2 × 2 model of Markusen and Venables (2000), there is only a (highly unlikely) unique combination of trade costs, investment costs and ratio of plant-to-firm setup costs where NEs and HMNEs can coexist. By contrast, with three factors, NEs and HMNEs with identical productivities can coexist over a wide range of combinations of trade costs, investment costs, and plant-to-firm setup costs due to the endogenous adjustment of the relative price of human-to-physical capital. Intra-industry trade and FDI can coexist for two identical countries. 2 Moreover, the existence of human and physical capital allows distinguishing MNEs' foreign affiliate production from MNEs' capital flows, two different “concepts of FDI.” 3 Second, while introducing a third factor implies coexistence of NEs and HMNEs for identically-sized economies, this extension cannot explain empirically the “complementarity” of bilateral trade and FDI flows to GDP similarity. Typical empirical gravity equations of international trade and FDI tend to suggest that both trade and FDI from country i to country j should be positively related to the size and similarity of their GDPs. However, the introduction of a third country – rest-of-world (ROW) – to our “knowledge-and-physical-capital” model can explain readily the complementarity of bilateral trade, FDI, and FAS to changes in a pair of countries' economic size and similarity as typical to gravity equations. In a two-country world, gross multilateral and bilateral trades (or FAS) are identical; NEs and HMNEs must substitute for one another when the two countries are identically sized in the face of trade and investment costs. However, introducing a third country along with capital mobility allows two countries' trade, FDI, and FAS to covary positively with increases in these two countries' GDP similarity because the “substitution effect” associated with exogenous trade-to-investment costs is potentially offset by a “complementarity effect” generated by endogenous relative prices of physical-to-human capital interacting with the three countries' economic sizes. With three countries, both bilateral trade and FAS are maximized when a pair of countries' GDPs is identical, unlike a two-country world. Moreover, the presence of the third country can explain why FDI from one country to another is not maximized when GDPs are identical — which is observed empirically! The complexity of the nonlinear relationships between trade, foreign affiliate sales, FDI, GDP sizes and similarities, trade costs, and investment costs precludes closed-form solutions, such as the trade gravity equations derived in Helpman and Krugman (1985) or Anderson and van Wincoop (2003). As in Markusen (2002), we must employ a numerical version of the general equilibrium (GE) model to motivate the gravity-like relationships among these variables. However, the theoretical relationships between the bilateral flows – trade, foreign affiliate sales, and FDI – and GDP sizes and similarities demonstrated graphically are similar, but not identical. Consequently, to avoid “ocular-metrics” and in the presence of approximation errors associated with the nonlinear relationships, we employ regressions of “theoretical” flows on pairs of countries' GDPs, trade and investment costs, and ROW GDP to motivate theoretically and quantitatively that bilateral trade, FAS, and FDI flows' economic determinants should be “well-approximated” by gravity equations — yet not precisely the same gravity relationships. 4 The remainder of the paper is as follows. Section 2 presents some typical empirical regression results for trade and FDI gravity equations to motivate our analysis. Section 3 presents our 3 × 3 × 2 GE model of FDI, MNEs and trade. Section 4 discusses the calibration of the numerical version of the GE model. Section 5 shows how introduction of the third factor generates “coexistence” of NEs (bilateral intra-industry trade) and HMNEs (bilateral intra-industry investment) for two identical countries. Section 6 demonstrates how the further introduction of a third country generates “complementarity” of bilateral FAS, FDI, and trade flows with respect to the country pair's economic size and similarity. Section 7 addresses the regressions of “theoretical flows” on GDP sizes and similarities, trade and investment costs, and ROW GDP to show that bilateral trade, FAS, and FDI flows' determinants should be “well-approximated” by gravity equations — though not quantitatively identical gravity relationships. Section 8 concludes.

The introduction of a third internationally-mobile factor to the standard 2 × 2 × 2 model allows us to resolve fairly readily a puzzle in the modern knowledge–capital literature on MNEs (without heterogeneous productivities among firms) that foreign affiliate sales among two identical economies completely displace their intra-industry trade. The introduction of a third country suggests a formal N-country theoretical rationale for estimating gravity equations of FDI flows and foreign affiliate sales, in a manner consistent with estimating trade gravity equations. Our future research agenda is quite large. We intend to extend our methodological framework to examine theoretically the economic determinants of trade, FDI, and FAS flows between developed and developing countries, and among developing countries. We plan to incorporate intermediate goods to better understand the role of “outsourcing” for NEs and MNEs. We intend to investigate further the role of physical capital for better understanding the empirical relationships between relative factor-endowments and the pattern of MNE behavior as raised in Carr et al. (2001) and Blonigen et al. (2003).