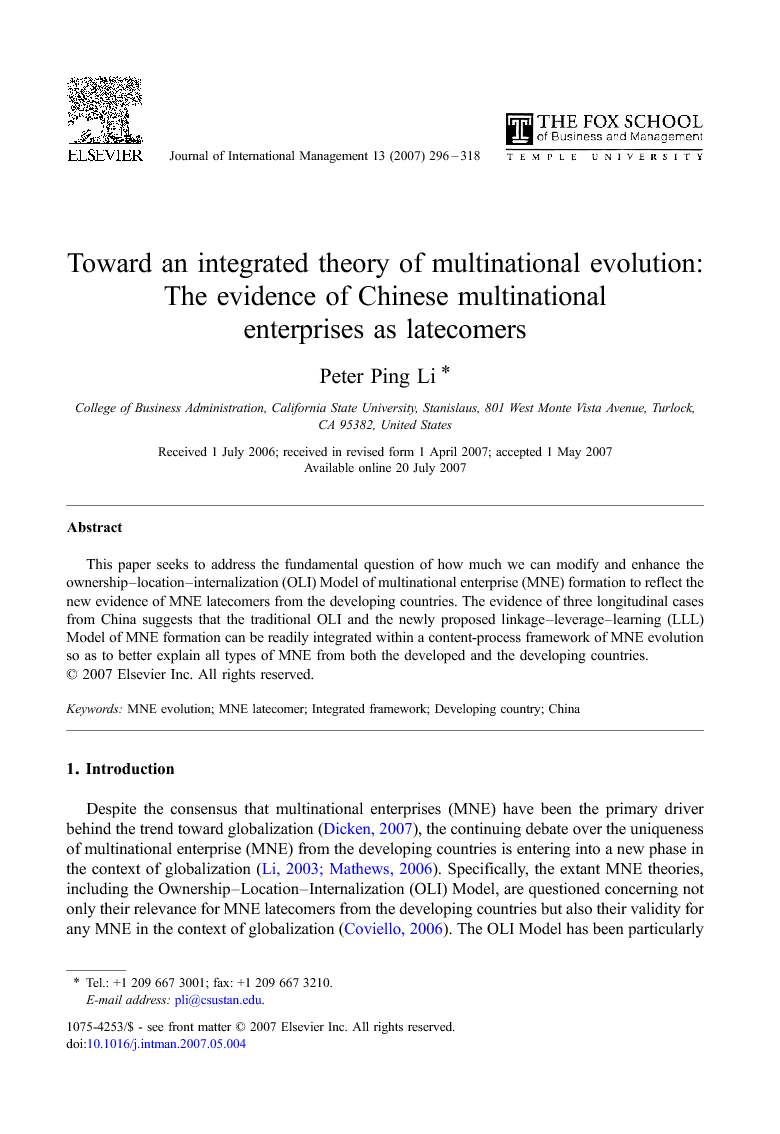 is paper seeks to address the fundamental question of how much we can modify and enhance the ownership–location–internalization (OLI) Model of multinational enterprise (MNE) formation to reflect the new evidence of MNE latecomers from the developing countries. The evidence of three longitudinal cases from China suggests that the traditional OLI and the newly proposed linkage–leverage–learning (LLL) Model of MNE formation can be readily integrated within a content-process framework of MNE evolution so as to better explain all types of MNE from both the developed and the developing countries.

Despite the consensus that multinational enterprises (MNE) have been the primary driver behind the trend toward globalization (Dicken, 2007), the continuing debate over the uniqueness of multinational enterprise (MNE) from the developing countries is entering into a new phase in the context of globalization (Li, 2003 and Mathews, 2006). Specifically, the extant MNE theories, including the Ownership–Location–Internalization (OLI) Model, are questioned concerning not only their relevance for MNE latecomers from the developing countries but also their validity for any MNE in the context of globalization (Coviello, 2006). The OLI Model has been particularly challenged by a growing body of research on MNE latecomers from the developing countries in East Asia (Li, 1994, Li, 2003, Mathews, 2002, Mathews, 2006 and Yeung, 1994). However, the recent challenges may be biased with too much criticism of the OLI Model's limitations but too little appreciation of its strengths, especially with respect to the roles of ownership advantage and internalization mode. Hence, a more balanced perspective is required to explain all types of MNE. To shed new light on the ongoing debate over whether or not the OLI Model is outdated so as to be modified or even replaced by new models, this paper builds on the recent studies on MNE latecomers from East Asia to address the essential question of how much we can modify and enhance the OLI Model, especially with a more balanced approach. I focus on this issue due to three reasons. First, I doubt if the OLI Model is readily applicable to MNE latecomers from the developing countries because it fails to explain how MNE latecomers from the developing countries achieve initial competitive advantages, and how MNE latecomers catch up with MNE early-movers over time. Second, I am concerned if the OLI Model is still relevant to any MNE in the future because it fails to explain the strategic implications of globalization and strategic alliance for MNE evolution. Third, it is desirable to adopt a balanced perspective concerning the limitations and strengths of the OLI Model, and it is also plausible to integrate the OLI Model with the new alternative models as complementary elements of a holistic framework. Adopting the method of multi-site longitudinal case study with a focus on the evolution of MNE latecomers from China, I seek to make two major contributions: (1) to modify the OLI Model so as to be applicable to MNE latecomers, and (2) to enhance the OLI Model so as to be relevant to all MNEs in the future. This paper is part of a growing trend to analyze organizational phenomena from a holistic, dynamic and dialectical perspective (Lado et al., 2006, Lewis, 2000, Li, 1998, Li, 2005, Poole and Van de Ven, 1989 and Quinn and Cameron, 1988). The rest of this paper is organized as follows. First, I introduce a framework to modify and enhance the OLI Model. Second, I provide the evidence of three case studies from China. Third, I discuss the implications of the case evidence. Finally, I conclude by suggesting the direction of future research.

This paper has contributed to the literature by addressing a fundamental question of how much we need to modify and enhance the OLI Model of MNE formation given the new evidence of MNE latecomers from the developing countries. The evidence of three longitudinal cases from China suggests that the traditional OLI and the new LLL Model can be readily integrated into the content-process framework of MNE evolution so as to better explain all types of MNE. The core implications for theorizing MNE are embedded in the holistic, dynamic and dialectical approach to theory-building with respect to the content and process of MNE formation and evolution. In particular, I adopted a more balanced perspective with respect to the limitations and strengths of the OLI Model so as to focus on the benefit of integrating the OLI and LLL Models. Further, I contributed with the new evidence of MNE latecomers beyond the so-called “dragon MNEs.” There are some critical implications for future research. First, we must verify and extend the findings of this study at other sites, especially in other non-Asian developing countries. The legitimacy of case study must be recognized (Eisenhardt, 1989, Eisenhardt and Graebner, 2007, Numagani, 1998 and Parkhe, 1993). Second, built on the new case evidence, we need to refine the proposed framework so as to develop specific models from the framework for theory-testing in the future. In particular, we must pay closer attention to the “soft” content factors of charisma, ambition and complacency as well as the temporal factors of tempo, synchronization and spiral progression. Third, we should examine how to operationalize the paradoxical nature of social phenomena via the dialectical logic for complete and consistent theory-building. One of critical topics for further study is to compare the three types of MNEs, i.e., latecomer, newcomer and early-mover, in the same industry. For instance, we ought to study the potential drawbacks of accelerated internationalization for MNE latecomers and newcomers with respect to the liability of lateness and newness, especially in more mature industries dominated by MNE early-movers. Also, we can compare the evolutionary patterns of the same type of MNE from various countries with different home markets so as to verify the impact of local contexts both at home and abroad, especially those countries with contrasting cultural values to verify the impact of cultural values (see Leung et al., 2005 for a review). In this sense, an expanded multi-dimensional construct of country-of-origin effect as a moderator can be a rich area for future MNE research (Tihanyi et al., 2005).