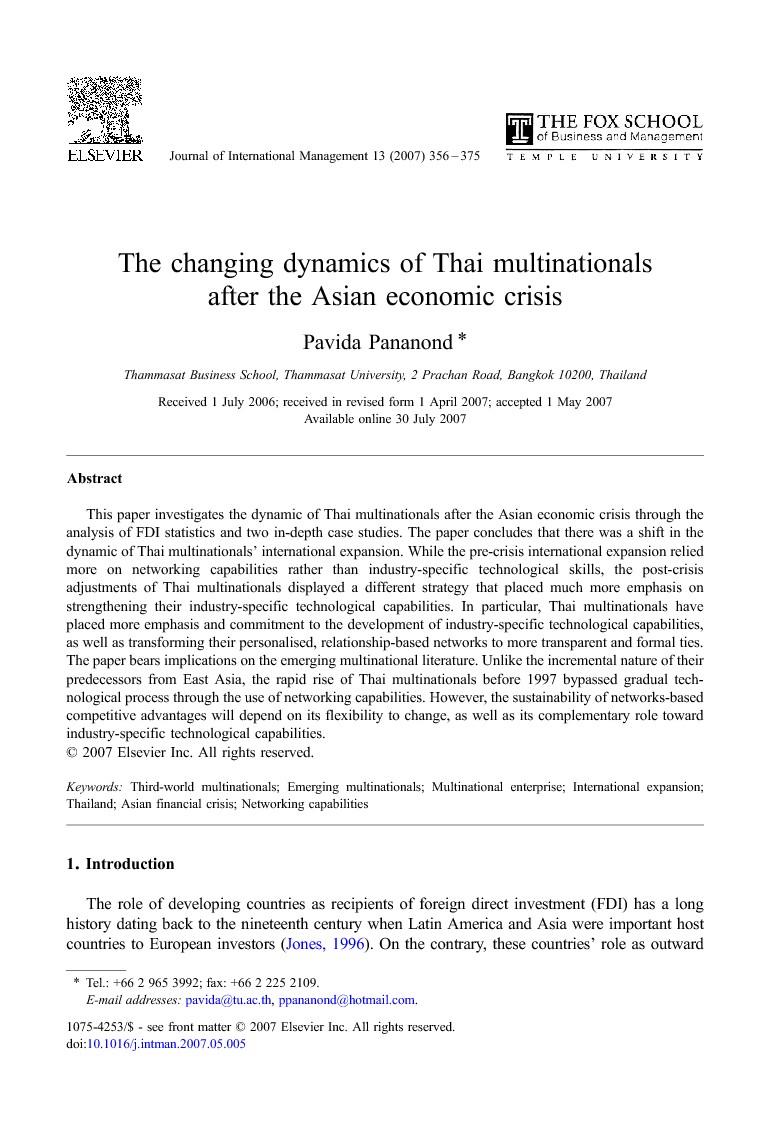 The role of developing countries as recipients of foreign direct investment (FDI) has a long history dating back to the nineteenth century when Latin America and Asia were important host countries to European investors (Jones, 1996). On the contrary, these countries' role as outward investors has only been recognised just over the past two decades. Although the study of multinational enterprise (MNE) has been a fundamental component of the international business literature, the academic discourse on MNEs has overwhelmingly been drawn from firms originating in advanced economies of the US and Europe. Much less focus has been placed on multinationals from developing countries, despite their increasing prominence in the global economy. The unbalanced empirical representation is equally striking within the stream of research on ‘third-world multinationals’.1 Pioneered by the 1983 publications of Lall and Wells, the ‘third-world multinationals’ literature has been predominantly based on firms from a limited set of developing countries, notably the more industrialised emerging economies of East Asia and Latin America. Among the most recently researched home countries are South Korea, Taiwan, Hong Kong, India, Brazil, Mexico, and Chile (see, for example, Yeung, 1998, van Hoesel, 1999, Mathews, 2002 and Beausang, 2003). With the rise of China as one of the world’s economic powerhouses, Chinese multinationals are also increasingly attracting attention in this academic domain (see, for example, Zhang, 2003, Deng, 2003 and UNCTAD, 2006). The heavy emphasis on these countries inevitably leaves out other developing economies that are home to many emerging multinationals. Southeast Asia is one region that has emerged as an important source of FDI. The region accounted for the third largest amount of outward FDI stock among developing economies in 2005, following East Asia and South and Central America (UNCTAD, 2006). Yet, few studies have been undertaken on Southeast Asian multinationals relative to their East Asian counterparts. While there are some similarities, for example, being considered ‘latecomers’ when compared with developed-country multinationals, there are considerable differences between East and Southeast Asian multinationals in their growth and international expansion. Among the key variables that contributed to the diversity of multinationals from East and Southeast Asia are differences in home country conditions, diversity in their stage of development, degree of transnationality, choices of diversification and international expansion strategy, and ethnic origins (Pangarkar, 2004). For example, it is often argued that the less developed economic and political institutions in Southeast Asia gave rise to business systems and organizations that relied heavily on networks and relationships and were often organised as large and diversified business groups (see Lim, 1996). On the contrary, the more market-oriented economies of East Asia, i.e. Hong Kong and Taiwan, generated multinationals that were more likely to be small and medium-sized enterprises (Li, 1994). Given these differences, some conclusions drawn mainly from East Asian multinationals may not be entirely applicable to other ‘third-world multinationals’. Whether multinationals from different developing countries share a similar pattern of internationalisation, and whether their competitive advantages are similarly derived are among the questions that warrant an in-depth investigation. Another aspect that the existing literature has yet to systematically address is the impact of the 1997 Asian economic crisis on the international expansion of multinationals from Asian developing countries. While various theories have been posited on the causes of the crisis, much less has been discussed on the impacts of the crisis on firms' behaviour and competitive positions. In the immediate aftermath of the crisis, many of the East and Southeast Asian multinationals withdrew from a variety of their overseas operations to focus on domestic survival. Although some time has passed and the trend toward recovery of outward FDI flows from the region was notable (UNCTAD, 2006), questions abound whether the post-crisis international expansion of multinationals from the emerging economies of East and Southeast Asia remains similar to their pre-crisis pattern. While impacts of institutional context on the early development of Asian firms have already been addressed (see, among others, Whitley, 1992, Whitley, 1999, Lim, 1996 and Mathews, 2002), research on Asian business is still in need of fresh insights reflecting the ongoing evolution of Asian firms, especially in the aftermath of the 1997 Asian economic crisis which saw Southeast Asia transformed toward more deregulation and liberalisation in many sectors (Yeung, 2007). Southeast Asian multinationals' reactions to ongoing changes and institutional challenges in the post-crisis era should therefore reflect their changing dynamics and evolution. This paper attempts to address the issues raised above by probing the post-crisis international expansion of Thai multinationals. The paper intends to empirically analyse whether and how the nature of competitive advantage of Thai multinationals has changed after the Asian economic crisis struck the region in 1997, and what it means for the prospects of Thai multinationals in the global economy. It seeks to draw implications on the theories of multinationals from developing countries, particularly those from Asia, as well as on the theories of multinational enterprises in general. The paper is divided into six parts. Following this introduction is the theoretical background of the literature on ‘third-world’ multinationals. The third part looks at the historical trends of Thai outward FDI flows, from 1980 to 2005, to provide background for the study. The two cases are then introduced, followed by the comparison and discussion of their pre- and post-crisis international expansion and the conclusions.

The findings from this study bears implications for the three levels of theories discussed earlier: on Thai multinationals; on ‘third-world’ multinationals; and on MNEs in general. First, this study confirmed that the international expansion of Thai multinationals reflected the transformation of their institutional conditions. When the institutional environment was characterised by market imperfection and weak intermediaries, strategies that relied on personalised networking might have been preferred. But when the competitive environment became less favourable, this type of strategy exposed its shortcomings. The evidence from this study suggests that the nature of networking may need to change as the firm develops. From simply drawing resources from network partners in the early stages of their international expansion, Thai multinationals need to cultivate networking skills that could enhance their overall competitive advantages in the long run. Future studies could explore further whether and which kind of networking capabilities would still be applicable in a more demanding environment of increasing market liberalisation and global competition. Second, this study implies that the emergence of ‘third-world’ multinationals may not be such a homogeneous phenomenon. The different institutional contexts from which multinationals of different origins should bear an impact on the type of competitive advantages these firms accumulate and the pattern of their corporate development (Van de Ven, 2004). This would confirm the need to expand the empirical base of studies on ‘third-world’ multinationals to have as diverse representations as possible, before conclusive views can be assumed on the development of multinationals from developing countries. Last, but by no way the least, is the implication on the MNE literature. Given all the diverse forms and strategies of multinationals that are emerging from a variety of economies, it is appropriate to question some inherent suggestions implied within the body of literature on ‘conventionalʼ multinationals. One implication from this study is that resources that can be considered a firm's ownership advantages could be derived from less-tangible and non-business factors such as social and political networks. The importance of these types of intangible resources is even more pronounced in societies that are still characterised by political and social nuances—a key feature among many developing countries. This paper investigates the dynamic of Thai multinationals after the Asian economic crisis. It was found that there was a shift in the dynamic of Thai multinationals' international expansion. During the early 1990s, Thai multinationals internationalised rapidly, thanks to their ability to draw resources from different partners to compensate for their relatively weak industry-specific technological capabilities. The international expansion that was based largely on network relationships led to opportunistic decisions that brought negative financial consequences. Nonetheless, the resurgence of these firms' international expansion in the years following the 1997 crisis was characterised by some noticeable changes. In particular, Thai multinationals have placed more emphasis and commitment to the development of industry-specific technological capabilities, as well as transforming their personalised, relationship-based networks to more transparent and formal ties. Strategies that had been widely adopted included the selection of core industries and the reduction of non-related activities, the increased emphasis on profitability over growth, the introduction of value-adding activities such as brand building and product innovation, as well as the acquisition of technology from its providers. These changes clearly signify a changing dynamic of Thai multinationals after the Asian financial crisis. Because the paper is based on only two case studies, it does not intend to claim generalisability to all the existing Thai multinationals. The results from the paper can lead to further discussion on the emergence of multinationals from developing countries, especially after the Asian economic crisis. The paper contributes to three sets of theories. First, the paper bears strong implications on the discussion of the nature of competitive advantage of Thai multinationals. The sustainability of networks-based competitive advantages will depend on its flexibility to change, as well as its complementary role toward industry-specific technological capabilities. The second implication is directed at the academic discourse on the emergence of MNEs from developing countries for its pre-determined assumptions that these different multinationals follow a similar approach in their overseas expansion. It is argued that the empirical representation of multinationals from developing countries should be broadened before conclusive assumptions can be drawn. Lastly, the result of this study bears indirect implication on what can be considered a firm's ‘ownership advantage’. While the concept has traditionally been associated with efficiency-enhancing factors that can be accumulated within the border of the firm, this paper suggests that intangible and non-business factors, like social and political networks, need to be considered as potential ownership advantages when conventional MNEs venture beyond their familiar context.