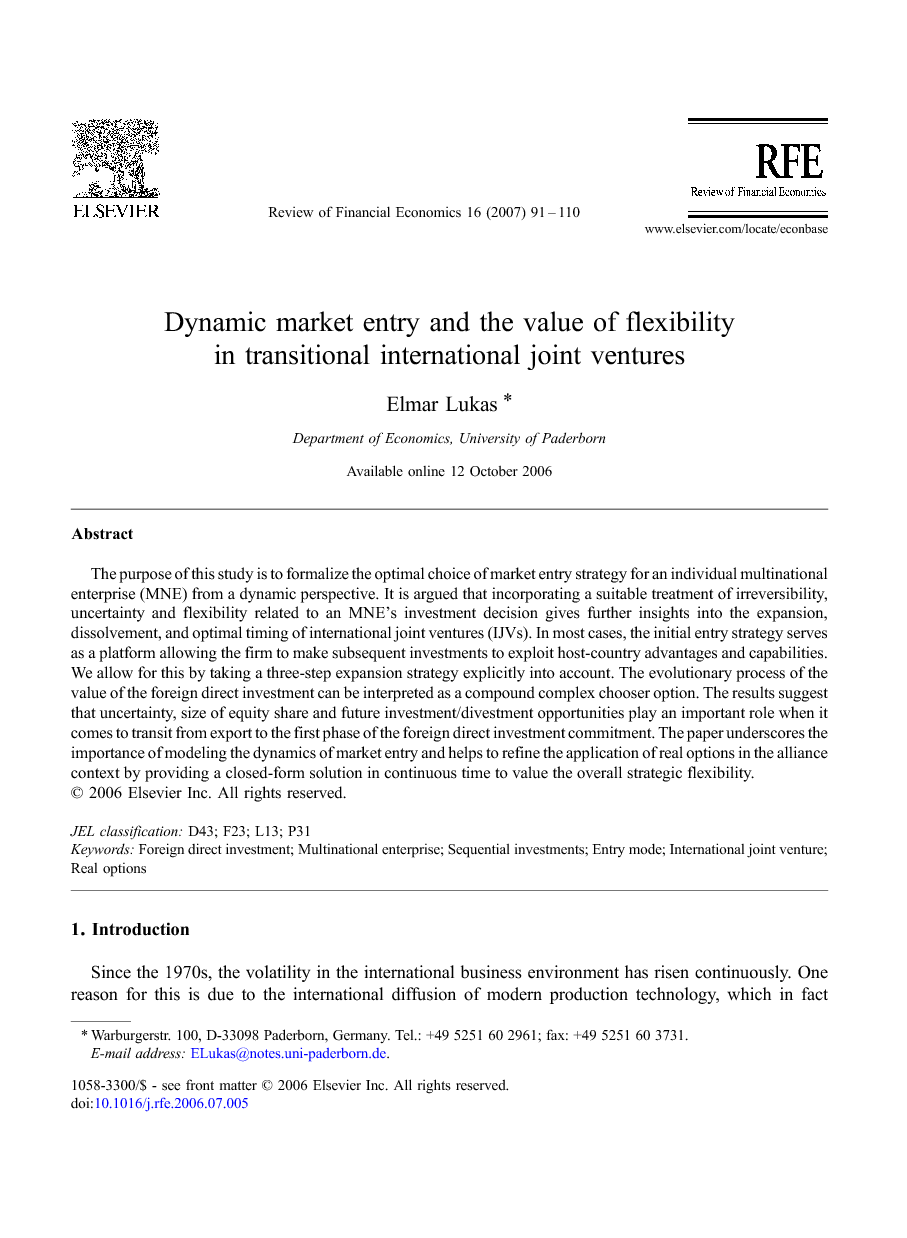 The purpose of this study is to formalize the optimal choice of market entry strategy for an individual multinational enterprise (MNE) from a dynamic perspective. It is argued that incorporating a suitable treatment of irreversibility, uncertainty and flexibility related to an MNE's investment decision gives further insights into the expansion, dissolvement, and optimal timing of international joint ventures (IJVs). In most cases, the initial entry strategy serves as a platform allowing the firm to make subsequent investments to exploit host-country advantages and capabilities. We allow for this by taking a three-step expansion strategy explicitly into account. The evolutionary process of the value of the foreign direct investment can be interpreted as a compound complex chooser option. The results suggest that uncertainty, size of equity share and future investment/divestment opportunities play an important role when it comes to transit from export to the first phase of the foreign direct investment commitment. The paper underscores the importance of modeling the dynamics of market entry and helps to refine the application of real options in the alliance context by providing a closed-form solution in continuous time to value the overall strategic flexibility.

Since the 1970s, the volatility in the international business environment has risen continuously. One reason for this is due to the international diffusion of modern production technology, which in fact significantly gave rise to the range of countries that have the competence to innovate new products. Furthermore, the breakdown of the Bretton Woods system caused major exchange rates to float. Moreover, liberalization of capital markets and the privatization and deregulation of key industries, i.e. telecommunication and media had its share in increased volatility. Given such an environment, the decision on how to enter a foreign market has become crucial to an internationalizing firm (see e.g. McCarthy & Puffer, 1997). Besides all other market entry modes and a perceived decline in 2001, worldwide foreign direct investment (FDI) continues to grow, stressing the importance of equity based entry strategies. In this context, uncertainty puts a premium on flexibility which results in the fact, that multinational enterprises (MNEs) often prefer the formation of collaborative ventures, e.g. equity ventures or strategic alliances, when entering a foreign market for the first time. This has several reasons. The early stage of an international joint venture (IJV) provides important information, e.g. about true market demand, or certain governmental or cultural behavior. Such information is important because it could not have been obtained through investigation before the venture was initiated, making export strategies a clear initial favorite. On the other hand, an IJV provides an opportunity to buy more fully into a successful venture later on, an opportunity which is not available to those who have not taken an equity stake. As a consequence it avoids the more modest set-up costs of wholly owned subsidiaries (WOS). A joint venture (JV) is an agreement between two or more legally independent companies, which pool their capabilities and resources together to a shared business. The joint venture becomes an international joint venture if at least one foreign partner is involved. The joint aspect is that ownership and risk are shared, whereas the venture term implies separate legal and/or economic personality of the created enterprise.1 The economic rationale of an international joint venture is that it allows both of the partners to acquire some of the benefits of internalising the knowledge flow which is in addition economically justified if some complementary resources exist (e.g. Buckley and Casson, 1996, Contractor and Lorange, 1988 and Chi and McGuire, 1996). So far, models of the multinational enterprise have been too static and thus fail to take proper account of uncertainty that is created by the volatility in the international business environment. Consequently, flexibility was identified as the hallmark of modeling the multinational firm (Buckley & Casson, 1998b p. 21). In particular, there exists a lack of in-depth research in the MNE literature as well as in the international business literature with respect to the following questions. First, what triggers the switching of modes and second, under which circumstances does the firm expand or dissolve international joint ventures from a dynamic viewpoint? A third question arises from the search for an optimal degree of foreign ownership since MNEs have frequently to decide to own 100%, majority or minority shares of newly created foreign entities. The rest of the paper is organized as followed. Section 2 will provide a review of recent literature, following the presentation of the model in Section 3. The main results are presented in the fourth Section. A synopsis of major comparative-static results is provided in Section 5. Finally, Section 6 summarizes the main findings and provides suggestions for further research.