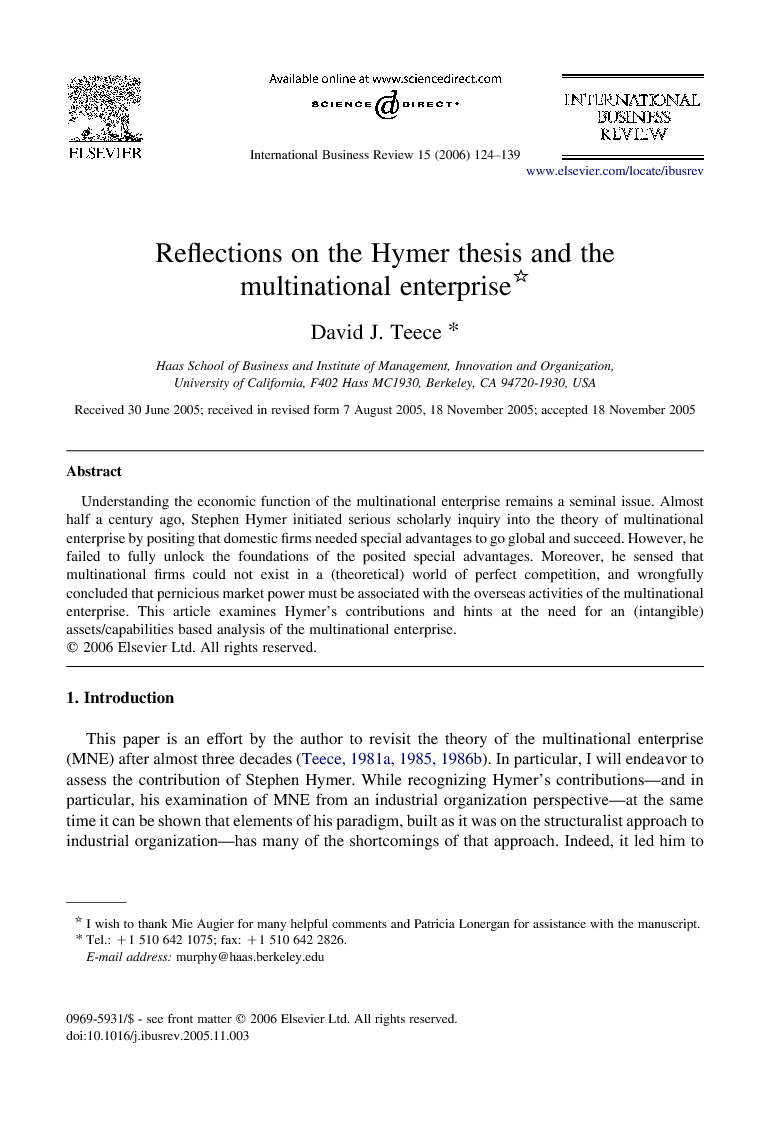 This paper is an effort by the author to revisit the theory of the multinational enterprise (MNE) after almost three decades (Teece, 1981a, Teece, 1985 and Teece, 1986b). In particular, I will endeavor to assess the contribution of Stephen Hymer. While recognizing Hymer's contributions—and in particular, his examination of MNE from an industrial organization perspective—at the same time it can be shown that elements of his paradigm, built as it was on the structuralist approach to industrial organization—has many of the shortcomings of that approach. Indeed, it led him to underplay important elements of the MNE, and to make policy errors with respect to the impact of the multinational enterprise on host and home countries. I will also show that the internalization school1, which is conceptually distinct from the Hymer/Kindleberger approach2, is a more robust approach to the study of the MNE. This is particularly true once internalization concepts became embedded in broader frameworks such as Dunning's electric paradigm. As an organizing framework, internalization ideas have stood the test of time reasonably well. However, because many national systems of production have became transformed by increased ‘outsourcing’ and ‘offshoring’ during the 1980s and 1990s (in part due to the global distribution of knowledge effectuated by the MNE itself), the theory of MNE needs to be modified to capture the essence of global enterprise and intra firm international trade today. In order to come to grips with the evolving nature of the multinational enterprise, the internalization framework and related approaches themselves need to be supplemented by a better understanding of the role of an enterprise's resources and also its dynamic capabilities.3 The modern corporation as we know it is multinational. Being multinational is no longer the preserve of large firms; moderately sized firms as well as quite small firms have global operations and employees and investments in multiple jurisdictions.4 By definition, a MNE operates in the global marketplace. It may use a network of organizational units and subunits (e.g. divisions, offices), but if very small it may not be divisionalized at all and may consist of professionals coordinating their activities via the Internet and telephone. Larger MNEs have the ability to monitor and manage business units in multiple jurisdictions. This in turn requires a communication and control system that is global in its reach.5 The MNE may or may not have a heavy commitment of fixed tangible assets abroad. The environments in which MNEs operate are likely (though need not) be more diverse than domestic environments. In particular, language, laws, customs, and cultures display more variability internationally than domestically. The essence of the MNE is that it accepts, adapts to, and capitalizes on institutional, cultural, and market heterogeneity while simultaneously trying to capture economies associated with leveraging some kind of (scalable) advantage in certain assets or processes it owns or is currently developing. A robust theory of the business enterprise must be able to embrace its global scope. Indeed, a domestic enterprise is a special case of a multinational enterprise. Accordingly, the study of international business should not be divorced from the study of domestic business, and the theory of the multinational enterprise should not be a distant cousin to the theory of the business enterprise more generally. However, as discussed later, incomplete global integration leaves special issues and considerations which an entirely domestic view of the enterprise tends to ignore.

The last half-century has seen the emergence of an important body of scholarly work on the multinational enterprise and direct foreign investment. Stephen Hymer is a critical figure in this evolution in that he challenged existing paradigms (easy, as they were weak and barely existent) and steered scholarship in the direction of firm and industry specific inquiry. With hindsight, this was not a huge leap as notions of firm level competitive advantage were embedded in the business literature at this time. However, the field of strategic management (where such ideas could be found) was itself bereft of a theory building activity. As a result, Hymer could write on an almost clean sheet of paper. He did so, and he did so well. The fact that his efforts are still discussed 50 years later speaks to his contribution. That said, he simultaneously toyed with capabilities notions, market power notions, and internalization notions. He did little to either sort out or integrate these notions. The seeds of an acceptable theory of MNE were sown by Hymer, but not reaped by him; nor have they been fully reaped even today.32