عنوان انگلیسی
On the innovativeness of foreign affiliates: Evidence from companies in The Netherlands
دانلود فوری مقاله + سفارش ترجمه 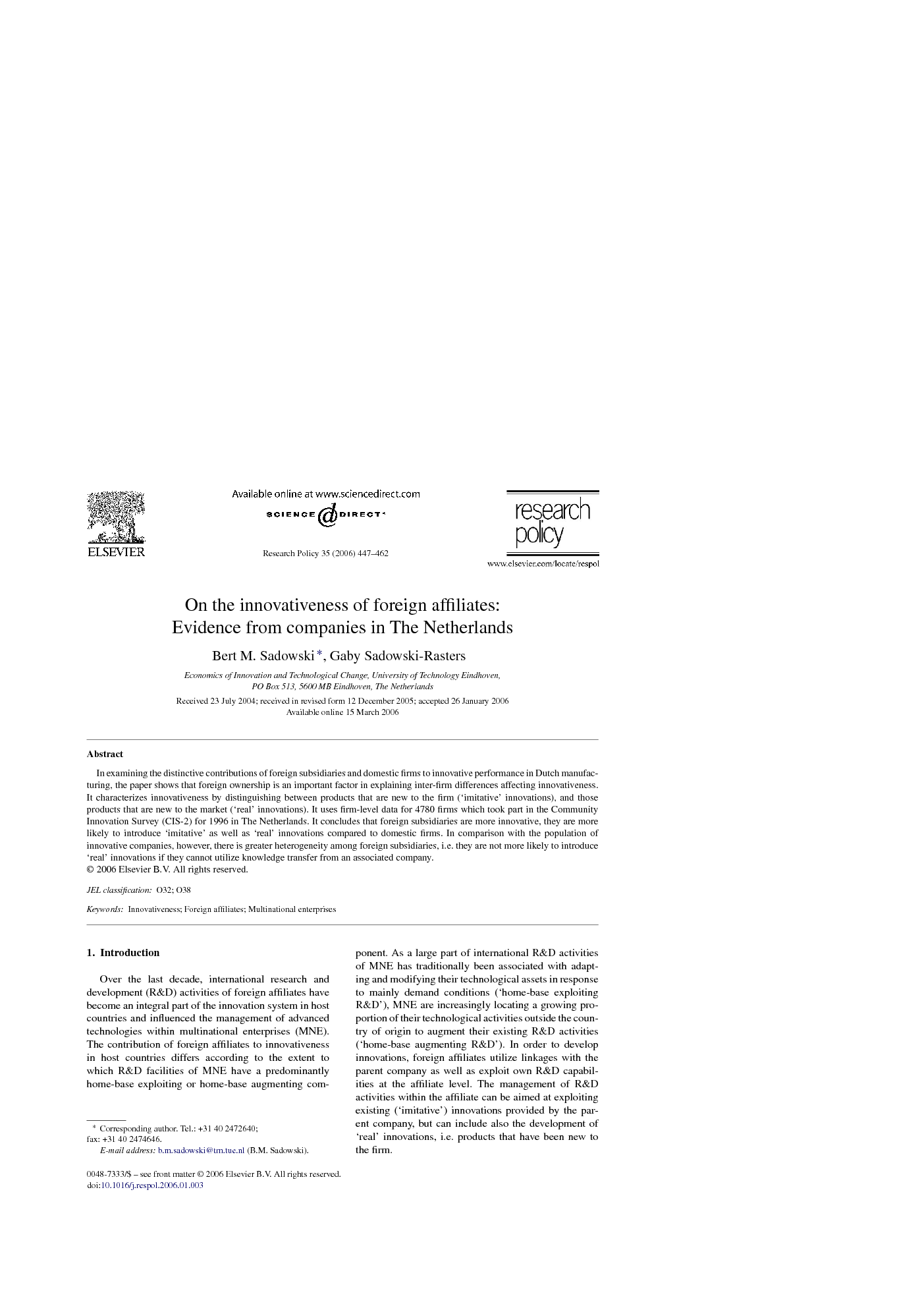 In examining the distinctive contributions of foreign subsidiaries and domestic firms to innovative performance in Dutch manufacturing, the paper shows that foreign ownership is an important factor in explaining inter-firm differences affecting innovativeness. It characterizes innovativeness by distinguishing between products that are new to the firm (‘imitative’ innovations), and those products that are new to the market (‘real’ innovations). It uses firm-level data for 4780 firms which took part in the Community Innovation Survey (CIS-2) for 1996 in The Netherlands. It concludes that foreign subsidiaries are more innovative, they are more likely to introduce ‘imitative’ as well as ‘real’ innovations compared to domestic firms. In comparison with the population of innovative companies, however, there is greater heterogeneity among foreign subsidiaries, i.e. they are not more likely to introduce ‘real’ innovations if they cannot utilize knowledge transfer from an associated company.

Over the last decade, international research and development (R&D) activities of foreign affiliates have become an integral part of the innovation system in host countries and influenced the management of advanced technologies within multinational enterprises (MNE). The contribution of foreign affiliates to innovativeness in host countries differs according to the extent to which R&D facilities of MNE have a predominantly home-base exploiting or home-base augmenting component. As a large part of international R&D activities of MNE has traditionally been associated with adapting and modifying their technological assets in response to mainly demand conditions (‘home-base exploiting R&D’), MNE are increasingly locating a growing proportion of their technological activities outside the country of origin to augment their existing R&D activities (‘home-base augmenting R&D’). In order to develop innovations, foreign affiliates utilize linkages with the parent company as well as exploit own R&D capabilities at the affiliate level. The management of R&D activities within the affiliate can be aimed at exploiting existing (‘imitative’) innovations provided by the parent company, but can include also the development of ‘real’ innovations, i.e. products that have been new to the firm. In recent years, an extensive literature has emerged demonstrating the importance of inter-firm differences for innovativeness in manufacturing industries, with only a few studies linking these differences to foreign ownership (Belderbos et al., 2004 and De Backer and Sleuwaegen, 2003). In the management and applied economics literature on innovation, the size of R&D activities has been characterized as an important variable in explaining inter-firm differences in innovativeness (Kleinknecht et al., 2002). Recently, the ownership of these activities has been considered as important in studying innovativeness (Klomp and van Leeuwen, 2001). Within the literature on the internationalization of R&D, foreign ownership advantages are considered as being responsible for performance differences between foreign affiliates and domestic firms. The early literature in the area has related the explanation of performance advantages to increases in cost efficiency in the innovation process. Drawing on earlier versions of the product life cycle, studies in this tradition considered the centralized location of R&D as a necessity to achieve economies of scale in the R&D function and to diffuse technology through transfer to a foreign affiliate. R&D in foreign affiliates has been related to facilitate the effective implementation of less profitable stages of the product cycle. But as recent evidence has shown the international flow of technology has not only been one-directional, i.e. running from creation (in one location), through transfer to a firm or affiliate (in another location), to diffusion to a wider variety of firms in the host country. In contrast, it has been demonstrated that MNE locate a growing proportion of their R&D capabilities outside the country of origin. In order to innovate, foreign affiliates might even tap into local fields of expertise and utilize the expertise gained to develop innovations that are entirely new to the firm (Cantwell, 1995, Cantwell and Janne, 1999 and Pearce and Papanastassiou, 1999). As the literature on the internationalization of R&D has characterized the link between innovativeness and foreign ownership, it has been less clear about the extent to which foreign affiliates have contributed to the exploitation of existing innovation compared to the creation of ‘real’ innovation. Therefore, a synthesis of the research streams on the internationalization of R&D and the economics of innovation can provide new insights into the link between foreign ownership and different types of innovativeness. In this context, the paper is aimed at characterizing the extent to which foreign ownership affects the propensity of companies to engage in innovation. It employs firm-level data from the Community Innovation Survey (CIS-2) in The Netherlands consisting of a data set of 4780 firms in 1996. The degree of newness of an innovation1 is measured on the micro-level based on managerial perceptions of new product introductions. The responses allowed to introduce a distinction between ‘real’ innovations that are ‘new to the market’ and ‘imitative’ innovations that are ‘new to the firm’. As this distinction is well established in the literature,2 it allows to examine innovativeness of companies by using a direct measure of innovativeness (van Beers and Sadowski, 2003 and Kleinknecht et al., 2002). In the following, the paper surveys the literature on the relationship between foreign ownership and innovativeness before discussing the nature of the data, the empirical models as derived from the literature and the estimation results. Summary and conclusions are presented in the final section of the paper.