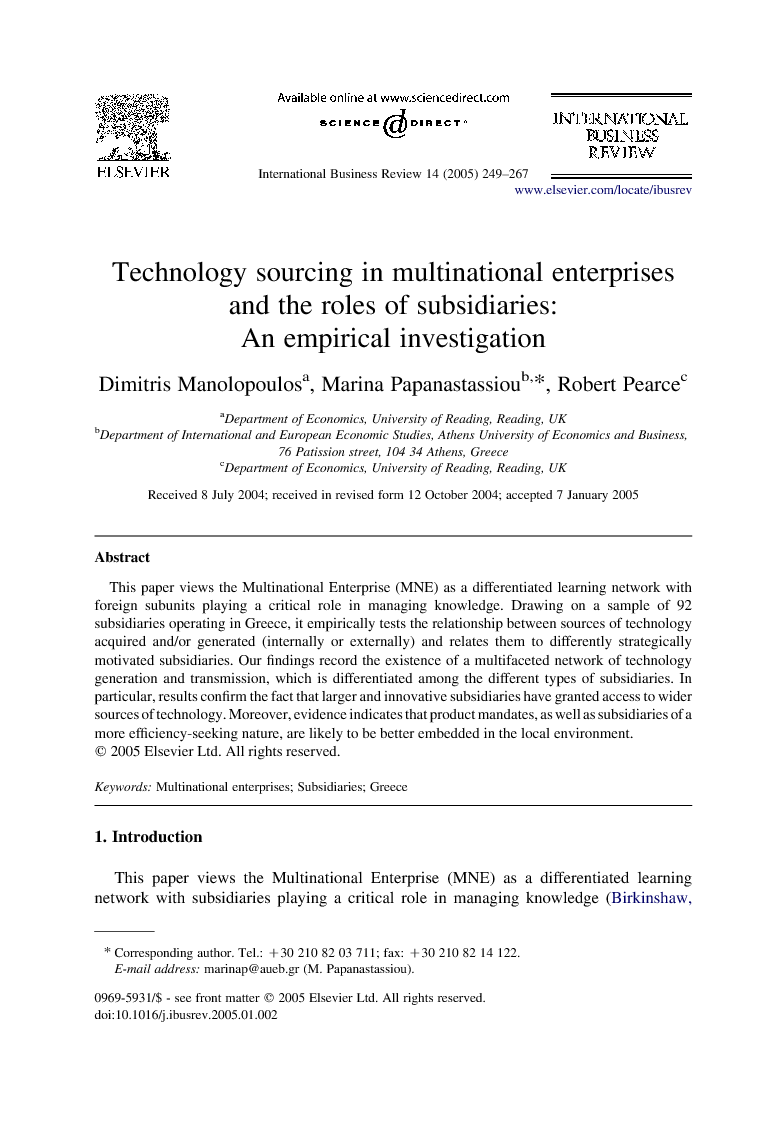 This paper views the Multinational Enterprise (MNE) as a differentiated learning network with foreign subunits playing a critical role in managing knowledge. Drawing on a sample of 92 subsidiaries operating in Greece, it empirically tests the relationship between sources of technology acquired and/or generated (internally or externally) and relates them to differently strategically motivated subsidiaries. Our findings record the existence of a multifaceted network of technology generation and transmission, which is differentiated among the different types of subsidiaries. In particular, results confirm the fact that larger and innovative subsidiaries have granted access to wider sources of technology. Moreover, evidence indicates that product mandates, as well as subsidiaries of a more efficiency-seeking nature, are likely to be better embedded in the local environment.

This paper views the Multinational Enterprise (MNE) as a differentiated learning network with subsidiaries playing a critical role in managing knowledge (Birkinshaw et al., 1998 and Gupta and Govindarajan, 2000). Today, rather than accepting predetermined roles, subsidiaries are asked to actively engage in developing their operations and explore procedures that would increase the efficacy of the whole MNE network (Birkinshaw, 1996 and Crookel and Morrison, 1990). Building on recent advances regarding the strategic evolution of subsidiary roles, we argue that the MNE is a vehicle of integrating knowledge generated internally and externally from its global operations (Bartlett & Ghoshal, 1989). There are many cases of subsidiaries that perform specific value-added activities, which are fundamentally ‘embedded’ in their respective host-countries knowledge systems (evidence is provided by Dunning, 1996, Jarillo and Martinez, 1990 and Kuemmerle, 1999). Technological competencies have been theoretically and empirically verified (Asakawa, 2001 and Pearce, 1994) as likely to be central to the creation of ownership advantages for many MNEs. Technology acquisition decisions have traditionally examined the firm's choice either to use internal technology or to acquire technology from outside sources (Murray, Wildt, & Kotabe, 1995). While globalisation of markets and the consequent changes in competitive and technological environments, R&D internationalisation (Peng & Wang, 2000) and the new perspectives of international technology management (Chatterji, 1996) have moved up on the technology research agenda (Chiesa, 2000 and Gassman and Von Zedtwitz, 1998), there is scope for further exploration of current quantitative and qualitative research. Most firm-level empirical findings and theoretical contexts examined technology transfer (Conner and Prahalad, 1996 and Kogut and Zander, 1993), the ‘absorptive capacity’ of firms (Cohen & Levinthal, 1990) and spillover effects of technology and survey the impact of technology in productivity and firm performance (Kotabe, Srinivasan, & Aulakh, 2002). Moreover, the majority of research undertaken in related issues has been done at the level of the parent firm (Cantwell, 2001). Technology sourcing and the strategic role of subsidiaries as organizational units, that could consist an influential factor in technology acquisition and development, has received relatively little attention. This paper departs from the literature supporting that knowledge generation, deployment, acquisition and diffusion may derive from MNE's both external and internal environment (Gupta and Govindarajan, 2000 and Minbaeva et al., 2003). Drawing on a unique sample of 92 subsidiaries operating in Greece, the research is centered on MNEs technology inputs and empirically tests the relationship between sources of technology acquired and/or generated (internally or externally) and relates them to differently strategically motivated subsidiaries. Greece was selected as the focal country since the opening up of new markets (mainly Eastern European) accelerated the process of restructuring on behalf of Greece based MNE subsidiaries. Recent developments have turned the attention of foreign investors to Greece's competitive advantages including the existence and potential of knowledge generating assets. Two are the distinctive contributions coming out of this analysis: First, we show strong evidence that the operations of MNE foreign subunits, in an otherwise peripheral economy of the EU, rely in fact on a multifaceted knowledge creation network that goes beyond mere technology transfer. Second, we present for the fist time a detailed subsidiary-level analysis regarding foreign operations in Greece. The rest of the paper is organized as follows: Section 2 sets the theoretical background, Section 3 analyses the proposed research questions and presents the sample characteristics, Section 4 evaluates subsidiaries' sources of technology, Section 5 lays down the methodology of the study, presents and discusses the empirical findings and in Section 6 we conclude by putting the findings into a working strategic and managerial perspective.

In this paper we argued that the contemporary MNE is a continuously evolving institution. Consequently, subsidiaries are not allocated necessarily ad hoc specific roles and a more decentralised approach to technology generation and diffusion becomes central to the strategic evolution of the MNE. Our findings reinforce the view that technology in MNEs is no longer simply the responsibility of the corporate center. The parent seems to have been transformed from a ‘technology creator’ to a ‘technology organizer’ in its global operations (Cantwell, 2001). Foreign subsidiaries not only serve the traditional function of adapting the parent MNE's technology to local market needs and providing technical support to local factories and customers (Cantwell, 2001), but also have become significant sources of technology development (Cantwell, 1995). Drawing on a unique data set including 92 subsidiaries operating in a peripheral country in terms of FDI received, and by applying a typology of subsidiaries derived by White and Poynter (1984) we addressed two research questions regarding the extent and availability to various technological resources to MNE subsidiaries in Greece and the impact of specific subsidiary roles on the accessibility of technology, respectively. The selected typology enables us to extract useful insights concerning the contribution of subsidiaries in the technological development of the host country. Findings should not be restricted to the focal country only, but can be replicated to other peripheral countries that join EU, since Greece has experienced similar economic characteristics. Our results record the existence of a multifaceted network of technology generation and transmission, which is differentiated among the different types of subsidiaries. They confirm the fact that larger and innovative subsidiaries have granted access to wider sources of internally generated technology. Creative subunits (WPMs), as well as subsidiaries of a more efficiency-seeking nature (RPSes) are likely to collaborate more intensively with local firms and scientific institutions compared to TMRs clearly indicating that WPMs and RPSes are in a better position to scan the host environment for relevant external technology sources and deal more efficiently with local responsiveness pressures. Especially for WPMs, evidence provides ample support to the argument that the differentiated MNE is more favorably positioned than the non-differentiated MNE with respect to create knowledge as a medium for the development of competitive advantage, simply because of its access to more knowledge sources (Bartlett and Ghoshal, 1989 and Hedlund, 1986). Nevertheless, all subsidiary types, regardless of their nationality or/and strategic roles are positively influenced by varied internal technology sources, which mainly result in the reduction of transaction costs and the efficient exploitation of economies of scale and scope. The recorded multifaceted technology sourcing has clear strategic and managerial implications since it may affect both the degree of subsidiaries autonomy and the degree of integration with HQs. Subsidiaries are subunits under a hierarchical MNE organizational structure and simultaneously independent units competing in local markets. Their ability to act as ‘technology vehicles’ that absorb local knowledge and facilitate the MNEs' worldwide capabilities (Tallman & Fladmoe-Lindquist, 2002) can be hindered when they behave completely autonomously and strive for their own interests. However, the successful monitoring and exploitation of local technological resources lead MNEs to encourage localization of technology development. In that sense subsidiaries seek to create networks with host institutions of research generation for taking advantage of local ideas and products. Thus, the degree of integration, organizational architecture and the management control systems are of critical importance. For management, evidence provided by this research assumes that subsidiaries are at least partly able to make independent decisions. A critical concern in technology management is to track the impact of various technological inputs over a greater period of time, since according to Pavitt (1990) technology reliance decisions have long term impact in a firm's profitability. No technological knowledge is entirely internally or externally oriented. Nevertheless, literature provides evidence mainly in support of internal sources (Kogut, 2000). Further research on the determinants of a subsidiary decision to make technology outsourcing (external sourcing) is required. Management should then seek to control the determinants of technology benefits and costs. This may be accomplished, among other things, through managerial choices relating to knowledge sources. In terms of our earlier discussion, on the MNE knowledge based structure, these managerial choices influence and are influenced by the complexity of the knowledge structure, the technology strategy of the network and the technological capabilities of the host environment. In line with existing evidence (Foss & Pedersen, 2001), we also assume that management will choose subsidiary knowledge sources and organizational mechanisms for transferring knowledge in such a way that the overall value of the network is maximized. Finally, by exploring different types of R&D professionals' motivation (Osterloh & Frey, 2000) future research could investigate which conditions consist an impact factor in knowledge generation, deployment and the readiness of these high-valued employees to innovate. Apparently, our results come in support of recent indication which clearly demonstrates that current developments in the wider geographical region Greece is part of, i.e. Balkans and Eastern Europe, has increased the level of value added activities of certain foreign subsidiaries which have been evolving into ‘regional hubs’ (Birkinshaw, 1998). These subsidiaries seek for more sophisticated inputs which substantially support their ‘new’ upgraded mandates and thus become more embedded in the local environment. As a concluding remark, the issue of embeddedness becomes central to policy making in terms of attracting FDI by encouraging the adoption of FDI promoting policies that place emphasis (among other things) on the quality of local scientific institutions and the creation of clusters. This will allow for a more substantial development of local channels of knowledge transmission, which is fundamental to the development of Greece's competitive advantages (Porter, 2003).