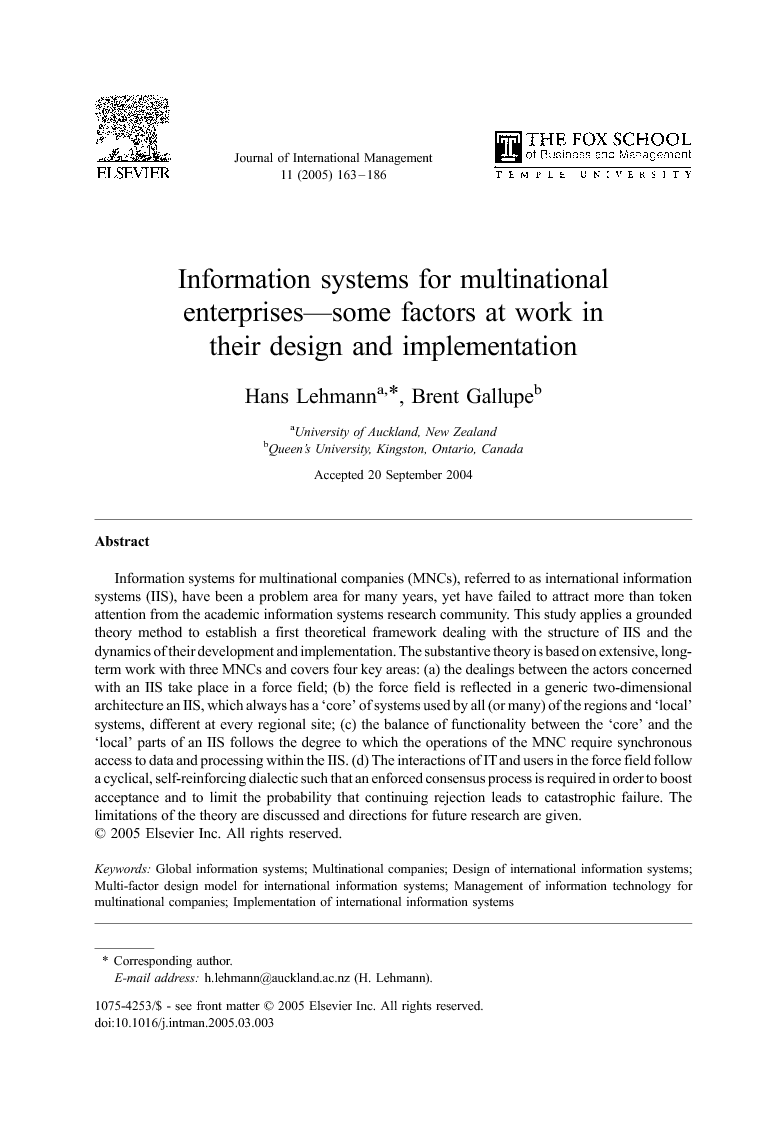 Information systems for multinational companies (MNCs), referred to as international information systems (IIS), have been a problem area for many years, yet have failed to attract more than token attention from the academic information systems research community. This study applies a grounded theory method to establish a first theoretical framework dealing with the structure of IIS and the dynamics of their development and implementation. The substantive theory is based on extensive, long-term work with three MNCs and covers four key areas: (a) the dealings between the actors concerned with an IIS take place in a force field; (b) the force field is reflected in a generic two-dimensional architecture an IIS, which always has a ‘core’ of systems used by all (or many) of the regions and ‘local’ systems, different at every regional site; (c) the balance of functionality between the ‘core’ and the ‘local’ parts of an IIS follows the degree to which the operations of the MNC require synchronous access to data and processing within the IIS. (d) The interactions of IT and users in the force field follow a cyclical, self-reinforcing dialectic such that an enforced consensus process is required in order to boost acceptance and to limit the probability that continuing rejection leads to catastrophic failure. The limitations of the theory are discussed and directions for future research are given.

Since the textbook ‘The Virtual Corporation’ by Davidov and Malone (1992), researchers have discussed the possibilities of electronic markets and value chains on the information superhighway (Benjamin and Wigand, 1995) and the role of ICT in organisation design (Lucas and Baroudi, 1994). In general, virtual organisation may be understood as a new kind of organisation structure or a novel visualisation in order to manage operations, in which ICT plays a major role (Bloomfield and Vurdubakis, 1997, Clarke and Clegg, 2000, Quattrone and Hopper, 2001b and Chapman and Chua, 2003). According to Hunton (2002, p. 56), “the blending of ICT and business process integration manifests itself in enterprise resource planning (ERP) systems, which serve as the foundation for linking multiple, related business entities into integrated supply chains”. The process of integrating independent business entities implies that management control must also be centralized. Today, the centralized control of large organisations requires ICT systems that make the periphery visible to the centre. In practice, large networks employing different ICT systems are constructed that collect data from local-level units and transfer it to headquarters to be analysed. This data collection process involves many tradeoffs and choices between various alternatives, with the result that only part of the information becomes management ‘facts’ while the rest of the information remains unseen by the top management. The differences in the information requirements of local levels and the headquarters have the potential to create ‘trading zones’ and local-level customized information systems (Dechow and Mouritsen, 2005 and Quattrone and Hopper, 2006). From an ICT perspective, this kind of system can be criticised for its complexity. ERPs can function as a data collection device, but they also exhibit complexity, which is evident from the numerous links to other information systems, updates of versions, data collection problems, the need for checkups, arranging information storage, etc. In practice it seems that for management control purposes the ERPs have to be supplemented with other information systems such as Excel, ABC software packages, BSC software packages, report generators, etc. (Quattrone and Hopper, 2006, Hyvönen et al., 2006 and Granlund, 2007). When investigating the role of such information systems as a part of management control, the object of research becomes a messy object in the sense of Law and Singleton (2005). In such cases, the unique and difficult-to-predict situation in which the system is constructed becomes very important for the creation of the object ( Quattrone and Hopper, 2001a, Dechow and Mouritsen, 2005 and Andon et al., 2007). Due to the messy and complex nature of large organisation's management control systems, it may be difficult to define the research object's boundaries exactly ( Quattrone and Hopper, 2001a, Andon et al., 2007 and Hyvönen et al., 2006). Because they are also decentralized geographically and are abstract in nature, the systems are always partially invisible to a single observer. Hence representing and visualizing systems becomes so important ( Bloomfield and Vurdubakis, 1997 and Quattrone and Hopper, 2001b). By creating various representations the messy object can be described in terms of another, with no need for the object itself being present ( Latour, 1987). This allows the creation of relevant facts out of complex and abstract issues, so that actors who participate in the process can understand and utilize them, i.e. making complex issues manageable ( Cooper, 1992, p. 255). As ICT objects are represented in various social frames, they can create different meanings and visions of the organisation ( Bloomfield and Vurdubakis, 1997). The prerequisite of such rational organisation of various meanings is the actors’ willingness to (re)cognize and (re)create their world and their work in terms of such constructs ( Bloomfield and Coombs, 1992). The study of centralized control mechanisms has evoked strong theoretical concepts (cf. Schulze and Orlikowski, 2001 and Lodh and Gaffikin, 2003) such as panopticon, a means of centralized totalitarian control where the objects of control will eventually end up controlling themselves ( Foucault, 1977 and Miller and O’Leary, 1987). However, we argue that in practice management accounting controls systems can only achieve a partial visibility, and partial forms of control. Such control systems can be called oligopticon ( Latour, 2005), which is a general term for locations that can be named, but that work contrary to panopticon:

The most positive aspects of applying grounded theory to the case data in this study are that the method combines scientific rigour with inbuilt relevance. As a result, the substantive theory developed in this research has substantial ramifications for practitioners working with IIS. In the first instance, acknowledging the force field and the interdependencies of territorial and functional conflict potentials will assist the practitioner in identifying and assessing the degree and direction of resistance from central and regional management and from business and IT people, respectively. This preparatory analysis will allow the early identification of areas of latent conflict and their damage potential, which can then be addressed before they erupt. Similarly, an explicit acceptance of the two-dimensional IIS architecture would avoid the fallacious assumption of a globally standard system as the default IIS solution. Subsequent assessment of the synchronicity requirements of the global operations enable rational identification of the application areas that are candidates for ‘core’ systems—from which the ‘local’ application systems and technology architecture can then be defined by complement. For example, such an assessment would have identified the asynchronous nature of the CO-OP's operations from the outset. This, in turn, would have clearly indicated that there was no need for a globally standardised information systems and technology, which would have avoided the damaging and ultimately catastrophic failure experienced there. The ‘core/local’ IIS architecture furthermore allows the parallel design, acquisition and implementation of the various IIS elements. ‘Core’ elements would be assembled by a centrally managed team, while each of the ‘local’ teams would implement their information technology independently and entirely to their own timetable—in parallel with everybody else. This simultaneity should ameliorate the time squeeze conundrum (technology becomes obsolete before it can be implemented globally) that the more mature transnational companies, such as FREIGHTER, experience. Setting up a consensus building project/programme organisation, as FREIGHTER did, is an effective answer to conflict management. These broadly based development teams for the design, acquisition and implementation of an IIS with specific emphasis on making taking on leadership positions have two benefits: • Having the ‘best’ business experts in the team provides the vehicle for obtaining the most up-to-date knowledge—reinforcing the functional quality to business/IT integration to acceptance loop. • It is a forum for settling differences, thus forestalling damaging conflict; escalation right up to executive board level ascertains closure in the resolution of persistent conflicts. A further, overarching benefit for the practitioner is that the activities suggested by the theory lend themselves to be formulated as a step-by-step methodology. For academic research, the substantive theory provides a rich framework. Three key parts of the theory are a major contribution to the field: 1. The notion of response cycles in a force field, especially the discovery that the cycles of acceptance and rejection are (a) not the opposite of each other, i.e. different dynamics apply to each of them; (b) both ‘deviation amplifying loops’, i.e. they will accelerate/decelerate until some ‘catastrophic occurrence’ happens unless (c) a ‘conflict by-pass’ procedural mechanism exists that breaks the vicious circle; 2. The two-dimensional generic IIS architecture with its three elemental components: compulsive ‘core’ for every business unit, ‘common’ systems for some and ‘local’ systems, which are unique to each site. Allowing ‘territorial’ forces to balance the architecture leads to destructive political battles. To defuse these or to avoid them altogether; 3. The ‘core’ functionality needs to be designed according to clear and rational requirements of operational synchronicity. Many parts of the theory, however, are still in an ‘approximate’ state, to use Weick, 1995a and Weick, 1995b terms. They point to several future research projects, concerned with refining concepts, constructs and their relationships as well as further adapting and improving the very methodology used. Two research topics stand out: • Research to solidify the theses surrounding the synchronicity theorem; the three cases in this study are somewhat polarised with respect to the synchronicity of their business processes. The CO-OP's operations were found to be mostly asynchronous, but both following cases had a relatively high degree of synchronicity due to some extent because the nature of their businesses is similar: they both provide a physical service, which forms the backbone of their international operations. More MNC cases from more diverse businesses need to be studied; • The response cycle theorems should be investigated further in a more organisational change management as well as in a technology integration context to improve their fit with other, related theories in these fields. The usefulness of the substantive theory discovered from this research should thus be taken as no more than a lead to begin work on its improvement-in the spirit of Glaser and Strauss (1967, p. 28): “A theory's only replacement is a better theory”.