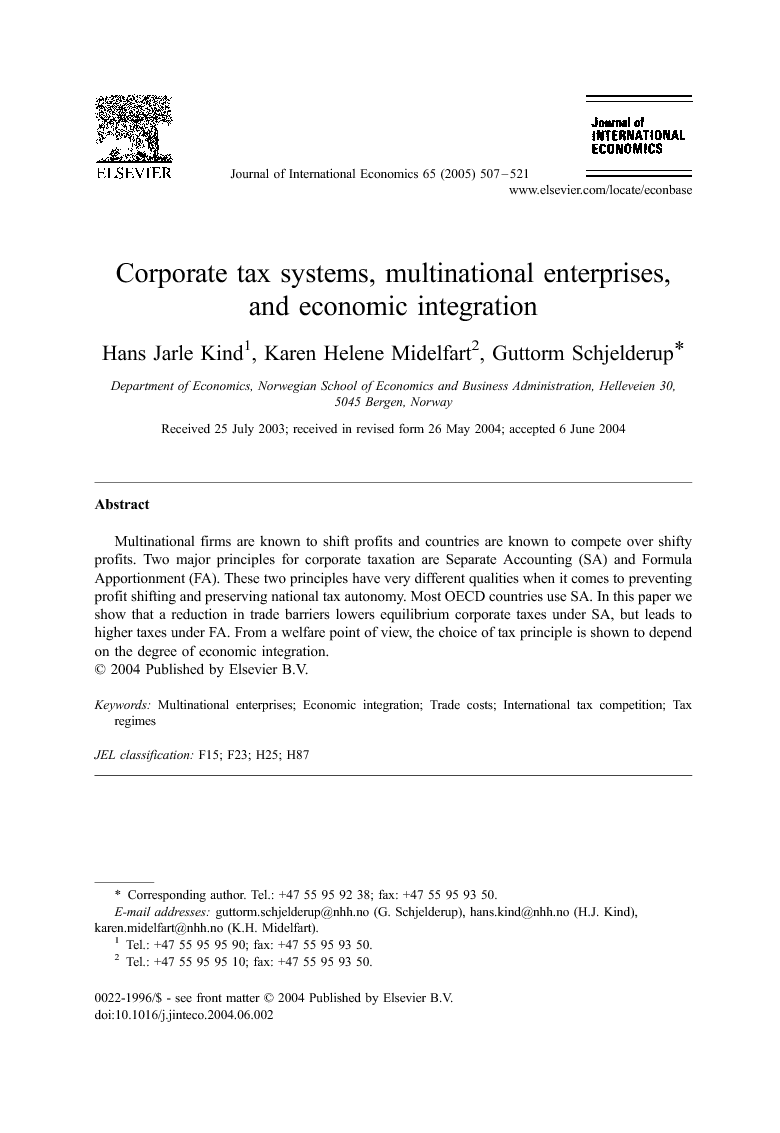 Multinational firms are known to shift profits and countries are known to compete over shifty profits. Two major principles for corporate taxation are Separate Accounting (SA) and Formula Apportionment (FA). These two principles have very different qualities when it comes to preventing profit shifting and preserving national tax autonomy. Most OECD countries use SA. In this paper we show that a reduction in trade barriers lowers equilibrium corporate taxes under SA, but leads to higher taxes under FA. From a welfare point of view, the choice of tax principle is shown to depend on the degree of economic integration.

This paper has demonstrated that the transfer price of multinationals is relatively tax sensitive for high degrees of economic integration under Separate Accounting. Separate Accounting is the corporate tax system used by most OECD countries. In contrast, the transfer price is not very tax sensitive for closely integrated countries under a Formula Apportionment tax system, which is used in the USA and Canada, and proposed by the recent EU Commission report on corporate taxation.18 These findings are mirrored in the welfare analysis, where we find that a system of Formula Apportionment (Separate Accounting) dominates for high (low) degrees of economic integration. Thus, the choice of corporate tax system depends crucially on the perceived degree of economic integration, and our findings give support to the view brought forward by many other economists that increased economic integration may call for a substantial reform of the corporate tax system.19 In our model we have made a number of simplifying assumptions, two of which we would like to discuss in more detail. The first relates to trade costs, where we have assumed that it is the foreign subsidiary that pays these expenses. An alternative formulation is to let the exporting plant pay the trade costs. Everything else being equal, the importing plant is more competitive (has lower costs) when it does not pay trade costs. This implies that the transfer price needs not be set as low as in the case when the importing plant pays the trade costs. The alternative modelling assumption thus amounts to a scaling of the transfer price that does not qualitatively affect the tax sensitivity of transfer prices under SA and FA, nor our welfare analysis.20 The second simplifying assumption refers to the use of tax revenues. Would our results change if we allowed tax revenues to be used for public good production? Our analysis shows that tax revenues differ under SA and FA and a reasonable conjecture is therefore that this difference would be reflected in differences in the provision of public goods under the two tax schemes. For public consumption goods one would not expect our results to change qualitatively, but if there is decreasing utility from consuming public goods, the relative benefit of one scheme to the other would be less pronounced. If instead tax revenue could be used to enhance the productivity of firms, one would expect, depending on the cross derivative between private and public input goods, that the preference for one tax scheme would increase. However, the main thrusts of our arguments should survive, but this is an obvious topic for future research.