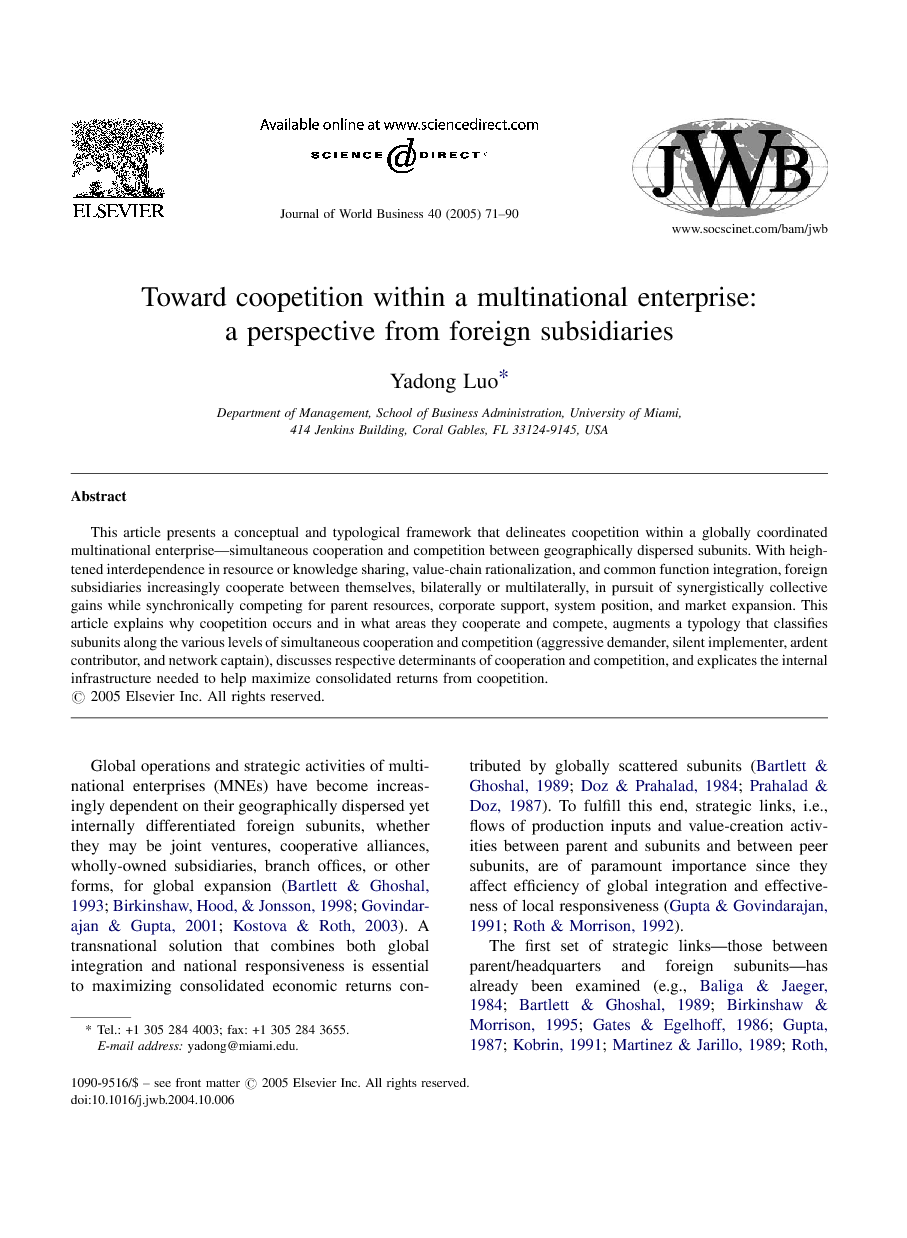 This article presents a conceptual and typological framework that delineates coopetition within a globally coordinated multinational enterprise—simultaneous cooperation and competition between geographically dispersed subunits. With heightened interdependence in resource or knowledge sharing, value-chain rationalization, and common function integration, foreign subsidiaries increasingly cooperate between themselves, bilaterally or multilaterally, in pursuit of synergistically collective gains while synchronically competing for parent resources, corporate support, system position, and market expansion. This article explains why coopetition occurs and in what areas they cooperate and compete, augments a typology that classifies subunits along the various levels of simultaneous cooperation and competition (aggressive demander, silent implementer, ardent contributor, and network captain), discusses respective determinants of cooperation and competition, and explicates the internal infrastructure needed to help maximize consolidated returns from coopetition. Global operations and strategic activities of multinational enterprises (MNEs) have become increasingly dependent on their geographically dispersed yet internally differentiated foreign subunits, whether they may be joint ventures, cooperative alliances, wholly-owned subsidiaries, branch offices, or other forms, for global expansion (Bartlett & Ghoshal, 1993; Birkinshaw, Hood, & Jonsson, 1998; Govindarajan & Gupta, 2001; Kostova & Roth, 2003). A transnational solution that combines both global integration and national responsiveness is essential to maximizing consolidated economic returns contributed by globally scattered subunits (Bartlett & Ghoshal, 1989; Doz & Prahalad, 1984; Prahalad & Doz, 1987). To fulfill this end, strategic links, i.e., flows of production inputs and value-creation activities between parent and subunits and between peer subunits, are of paramount importance since they affect efficiency of global integration and effectiveness of local responsiveness (Gupta & Govindarajan, 1991; Roth & Morrison, 1992). The first set of strategic links—those between parent/headquarters and foreign subunits—has already been examined (e.g., Baliga & Jaeger, 1984; Bartlett & Ghoshal, 1989; Birkinshaw & Morrison, 1995; Gates & Egelhoff, 1986; Gupta, 1987; Kobrin, 1991; Martinez & Jarillo, 1989; Roth, Schweiger, & Morrison, 1991). A second set of strategic links—those between peer subunits—has not yet been adequately addressed. Recent research on knowledge sharing between subunits has indeed offered useful insights into such links. Knowledge sharing has been studied from the viewpoints of global value-chain (Hedlund, 1994; Hitt, Hoskisson, & Ireland, 1994), resource exploitation and exploration (Kogut & Zander, 1992; Zander & Kogut, 1995), and global integration (Ghoshal & Bartlett, 1988; Gupta & Govindarajan, 1991). Several other studies have addressed how knowledge sharing is shaped by external environment conditions, such as institutional deterrence, regulatory hindrance, environmental hostility, liability of foreignness, consumption behavior, and intellectual property rights protection (Eisenhardt & Behnam, 1995; Granstrand, Hakanson, & Sjolander, 1993; Kostova, 1999 and Roth and Morrison, 1992; Ruggles, 1998). Knowledge sharing, however, captures only a part of cooperation-side strategic links and does not address competition-side relations nor other elements of cooperation. Ghoshal and Bartlett (1990) suggest that an MNE is a differentiated yet coordinated network of units that both compete and cooperate. More recently, several studies (e.g., Nohria & Ghoshal, 1997; Tsai, 2001 and Tsai, 2002; Tsai & Ghoshal, 1998) further articulate that inter-unit links consist of both collaborative and competitive ties that function simultaneously. Subunits themselves are either enforced or enticed to simultaneously compete and cooperate with one another. At GE, for instance, its four R&D labs are rewarded to learn from each other in order to gain benefits from new knowledge developed by other units. At the same time, they have to compete with each other for internal critical resources. This duality, sometimes even tensional, has become a major challenge for MNEs that seek to manage their intraorganizational knowledge flows, internalize globally coordinated operations, and differentiate various subunits with different strategic identities and roles (Govindarajan & Gupta, 2001; Kogut & Zander, 1996; Tsai, 2002). This article suggests that this duality is even more salient under transnational strategy than under global or multidomestic strategies. While studies have already addressed the concept and rationality of coopetition within an MNE, our understanding of the content, process, and infrastructure of this coopetition remains limited. The literature has not clearly unveiled a list of areas in which foreign subunits cooperate and compete between themselves and a list of factors that determine cooperation or competition. Variations in the levels of cooperation and competition for different subunits and common requirements for developing an organizational infrastructure that supports value-creation from coopetition are also understudied. To fill some part of this void, this article seeks to provide a framework for understanding coopetition within an MNE by explaining coopetition's content, typology, determinants, and infrastructure. Coopetition here is analyzed between a focal subunit and peer subunits as a whole. The individual level analysis (i.e., senior managers in subunits) is not included but merits future research (e.g., how country managers’ vision and merits may influence inter-unit cooperation and competition). This paper first explains in what areas subunits compete and in what other areas they cooperate. This is followed by a discussion of the respective determinants of cooperation and competition. The next section provides a typology that identifies individual subunits involving varying levels of cooperation and competition with peer members. The final section discusses how corporate executives of MNEs establish organizational infrastructure to nurture and govern inter-unit coopetition so that such coopetition may generate maximum aggregate returns for the entire network. Fig. 1 graphically summarizes these sections.

This article addresses inter-unit coopetition within a multinational enterprise. Inside an MNE, coopetition occurs between or among different subunits. To gain new knowledge and to exploit economies of scope for their business operations, these units have to cooperate with each other and learn from each other. Meanwhile, they compete with each other in several aspects of their business operations because they are compared on the basis of their ability to fulfill tasks or goals. When subunits are in rivalry, they have a strong incentive to improve their business performance so that they are better recognized and compensated by the headquarters than peer subunits. This article suggests that peer subunits cooperate along four dimensions, including technological, operational, organizational, and financial, while they also compete in three aspects, including parent resources and support, system position, and market expansion. An MNE is an internally differentiated network. Inside an MNE, each subunit has a varying level of both cooperation and competition with peer subunits. Subunits differ in their own needs for cooperation and competition due to idiosyncrasies in their external environments and internal capabilities. This difference is furthered by the various strategic roles played by different subunits as established by the headquarters. Subunits are configured with the rest of the MNE network on the basis of their strategic roles, external environments, and distinctive competencies. This article identifies and illustrates four types of subunits along these levels—network captain (both high), silent implementer (both low), ardent contributor (high cooperation and low competition), and aggressive demander (low cooperation and high competition). Each type has unique normative environments or conditions that justify the level of cooperation and competition consistent with its identity. As such environments fundamentally change and subunits evolve over time, a subunit's identity may accordingly change (Birkinshaw & Hood, 1998). For every type of subunit, cooperation and competition are neither prefixed nor predetermined. Instead they are contingent upon several factors that determine the interrelatedness between different subunits. This article specifically discussed the major determinants of cooperation (strategic interdependence, subsidiary form, and technological linkage) and the major determinants of competition (local responsiveness, market overlap, and capability retrogression) from the perspective of internal configuration. Although these determinants are by no means exclusive, they are critical variables underlying the interrelationships among subunits. This article presents that cooperation is accentuated if strategic interdependence and technological linkage increase. Cooperation may also be higher when subunits are wholly-owned subsidiaries than they are foreign joint ventures, except when the latter are used as a primary vehicle through which to acquire a partner firm's knowledge. Competitive pressure and product similarity may simultaneously increase both cooperation and competition. In order to maximize system gains from inter-unit coopetition, headquarters managers must establish and nourish the organizational infrastructure that coordinates coopetition. Particularly, it is important to build the intranet system, incentive system, encapsulation system, and coordination system.